Cádiz, Spain is one of Europe’s oldest cities—but its biggest appeal is the here and now. 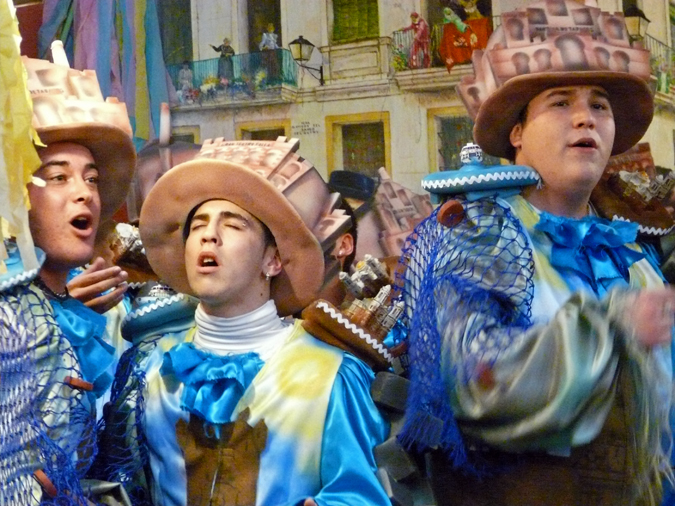 IT’S TWO O’CLOCK IN THE MORNING on the Wednesday of Carnaval, and in Barrio de La Viña only the tiniest babies are asleep. Throughout the fishermen’s quarter of Cádiz, Spain, every restaurant and grocery has converted itself into a sidewalk bar, selling crispy shrimp tortillas and bottles of local sherry. Groups of costumed troubadours wander the cobblestoned streets with drums and guitars, singing ribald songs mocking local politicians and world events. From the balconies of the barrio’s salt-weathered buildings, neighbors in bathrobes lean over their railings and take in the happy commotion.

The main attraction in La Viña in the early hours, though, is the makeshift tablao, or stage, erected on a narrow street called Virgen de la Palma. Here, thousands of Gaditanos (residents of Cádiz)—and at least one American—have gathered in a tight knot. We are listening to an ensemble of 15 men dressed in pirate costumes of emerald and gold, with black bandanas and wide-buckled boots. Part of a five-night musical marathon, they hold us all rapt, voices joined in a complex harmony of rich basses and near-falsettos as they belt out a tribute to one of Europe’s oldest cities:

A poet, a beach, a history
Two castles standing in silence
Hot sand and the cool west wind at sunset
Dream of a Gaditano

The crowd cheers, claps, chants. Parents hoist their children aloft. Buddies embrace. Couples kiss. Bottles of sweet moscatel and dry fino pass from hand to hand. Though Lent has begun in the rest of the world, bringing to a close the more famous Mardi Gras celebrations, it’ll be days before this Andalusian city winds down its own Carnaval. In a place as proud, as radiant, as historic as Cádiz, there’s too much to celebrate to let Ash Wednesday stand in the way.

It’s been more than six years since I first visited Cádiz, and I find myself returning whenever I can. This city of 135,000 that juts like a crooked finger into the Atlantic is so luminous that the sun’s reflection on its whitewashed buildings nearly sears the eyes. And it’s packed with enough history to make Paris and Rome seem like urban toddlers. More than 3,000 years have passed since the Phoenicians colonized this tiny outpost, the outermost limit of the world as they knew it. Starting in approximately 1100 B.C., Cádiz became a key axis in the Phoenician silver and tin trade. After Rome, it became the second-most-populous city in the Roman Empire. Julius Caesar indeed slept here.

Under Roman rule, Cádiz grew famous for its exports of salt fish and for its dancing girls, the puellae gaditanae,who were known for performing their “wanton gestures” to the rhythm of bronze castanets. The artifacts of the Phoenicians, including two enormous and intact sarcophagi, are on display at the marvelous Museo de Cádiz (Plaza de Mina 5). But to see evidence of the Romans, you don’t have to go to a museum. Their excavated theater, on Calle Campo del Sur, is open to the public most days from 11 a.m. to 1:30 p.m. 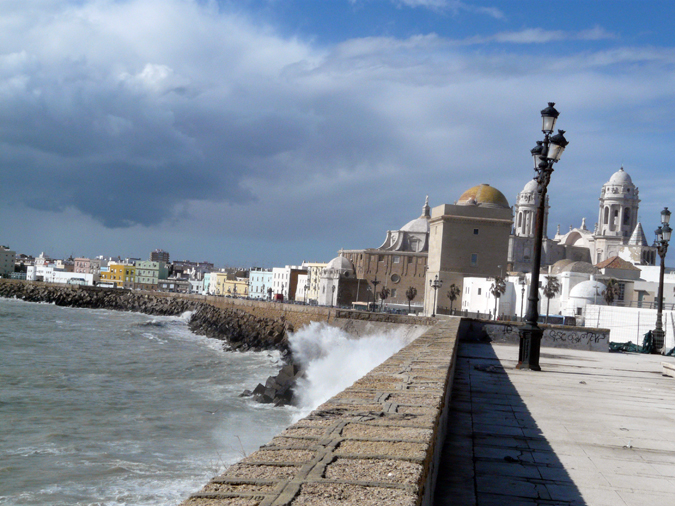 With its scenic Malecón, Cádiz is sometimes used as a stand-in for Havana in movies.

TO EXPERIENCE MORE RECENT HISTORICAL ERAS, I love wandering the labyrinthine streets of the old city, peeking into tiled courtyards as I eat tiny fried squid from a paper cone. The stone gates of Barrio del Pópulo, one of the oldest neighborhoods (and now the recipient of a major facelift), were already standing for 200 years by the time Christopher Columbus left nearby Cádiz harbor on his second voyage in 1493. Historian S.E. Morison called it the largest voyage, recounting, “Cannon roared, trumpets brayed, harps twanged, and a fleet of gay Venetian galleys escorted the Admiral from white-walled Cádiz to the open sea.” After exploring Pópulo’s weathered palaces and twisting alleyways—some so narrow I can touch the houses on both sides at once—I emerge into the wide palm-lined plaza of the massive Cathedral de Cádiz, whose construction began in 1722, supported by the money Cádiz gained from the long monopoly on Spanish trade with the Americas. A quick jaunt leads me to Calle Ancha, a fashionable shopping street (said to be the birthplace of political dialogue in Spain), and then to Gran Teatro Falla, a Moorish-style building of stunning pink brick that celebrates its 100th anniversary next year. Named after Gaditano composer Manuel de Falla, the theater hosts a series of televised contests—featuring dozens of Carnaval musical groups—in the weeks leading up to the big celebration each winter.

No matter where I wander in the old city, I’m never more than a ten-minute stroll from my afternoon’s final destination: La Caleta. Mythologized in scores of Carnaval songs, the beach features the handsome twin castles of San Sebastian and Santa Catalina with great flocks of gulls flying overhead. This is the beach where the Phoenicians buried their treasures hundreds of years B.C. It’s the same beach where, three millennia later, Halle Berry emerged from the sea in the James Bond flick Die Another Day. (In the movie, Cádiz was used as a stand-in for Havana.) Now La Caleta is the amphibious extension of Barrio de La Viña, whose residents catch briny sea urchins in its waters and jump from its high pier in an adolescent rite of passage. After a few hours’ walking, nothing relaxes me more than sitting on the pier reading, or kicking back at one of La Caleta’s seaside bars and watching the colored fishing boats rock in the breeze. 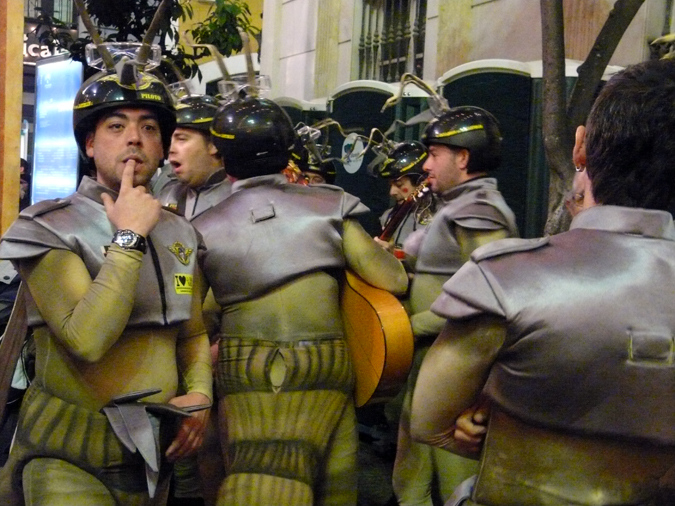 FOR ME, THOUGH, CÁDIZ’S BIGGEST LURE is not the architecture or the beach, but rather the Gaditanos themselves, a working-class people who, despite the city’s high unemployment rate, seem to wake up every morning in giddy anticipation of spending another day together. Gaditanos kiss and hug and burst into spontaneous song. They ride two-people-and-a-dog on scooters made for one. They walk through their barrios chanting affectionate off-color ditties about their city.

One Saturday night during Carnaval, I followed a band of musicians—men in their 20s and 30s dressed as floozies in fluorescent wigs—as they paraded through La Viña on their way to a singing engagement. En route, they stopped into a tiny social club where a dozen women forty years their senior were playing Bingo. “¡Que guapa!” the older women declared as young men entered. “How pretty!” Two generations danced around the room together, clapping a flamenco beat and chanting a mischievous slogan that would make my own grandmother blush. 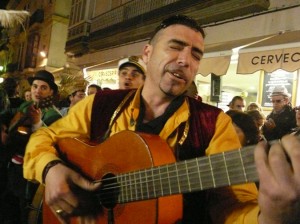 Chico Vallejo performs with his chirigota.

Several nights later, Jesús María Silva Chanivet, a Carnaval musician since he was nine, gave me his take on Cádiz’s love affair with the irreverent. “We’re in the South,” he told me. “Life here is happier, hotter, more affectionate. We can be who we want to be, and nobody tells us what to do.” Gaditanos like Silva like a good time, but they also take freedom very seriously, and for good reason. At a time when Napoleon occupied most of Spain and the cosmopolitan peninsular city became a refuge for the country’s liberals, Europe’s first democratic constitution was written in Cádiz. At Oratorio de San Felipe Neri (at Calle San José 38), a lovely cantaloupe-colored church with an unusual oval dome, delegates to the 1812 Cortes forged a constitution that guaranteed free political expression for all. It didn’t take long for King Fernando VII to quash the fledgling democracy. But in the nearly three decades since the death of Spanish dictator Francisco Franco, the spirit of Cádiz’s Cortes has finally flourished. One night, I noticed a throng of Gaditanos gathered in front of San Felipe Neri, craning their necks as eleven Carnaval musicians in white shirts and black Homburg hats sang in support of Cádiz’s striking shipyard workers. As the audience signaled its approval with cheers and applause, I thought: Here began the dream of European liberty, and here tonight it has come to fruition in the very same city. 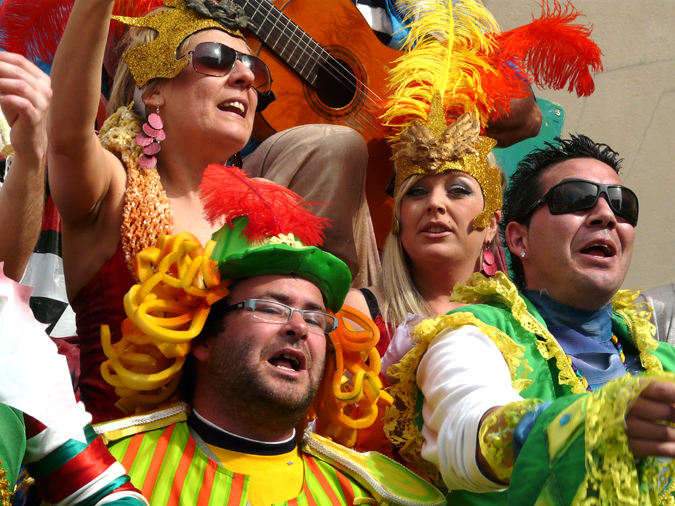 THOUGH CÁDIZ WELCOMES VISITORS WITH ENTHUSIASM, the city is not generous with amenities for guests, which is precisely why I love the place. Unlike the Andalusian cities of Sevilla and Granada, not to mention the overdeveloped Costa del Sol, there’s little tourism infrastructure in Cádiz. The old city has only two major hotels and a small number of family-run pensions. And few restaurants offer menus in English.

But Cádiz’s physical beauty rivals that of Sevilla or Granada—and if you need proof, take a stroll through the colorful Flower Market with its pink and ocher facades, or among the tiled fountains and giant ficus trees of the Alameda Apocada waterfront park. Yet it remains uncorrupted, a pure reflection of three millennia of civilization that has given Cádiz both its graceful architecture and its fun- and freedom-loving character.

I often end my visits with a walk along the stone pier at La Caleta Beach, which divides the muscular Atlantic from the more sedentary Bay of Cádiz. Having turned away from La Viña and the rest of the city, I watch the sun as it sets over San Sebastian castle. It is a jagged halo of oranges and yellows that gives way to darkness as the water surrounds me. There might be a pair of fishermen nearby, or some women with baby carriages out for an evening stroll, but more often than not, I’m left alone with the growing twilight. The Phoenicians, when they reached Cádiz, believed they had arrived at the end of the world. On nights like these, I can believe that, too. 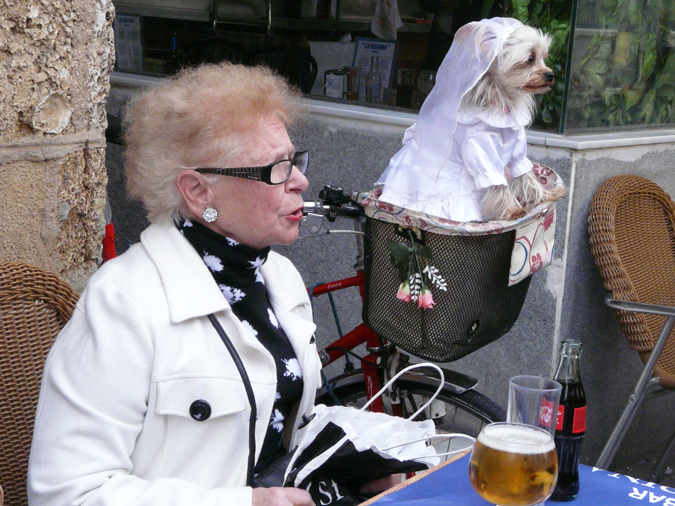 Outdoor dining near the Flower Market.