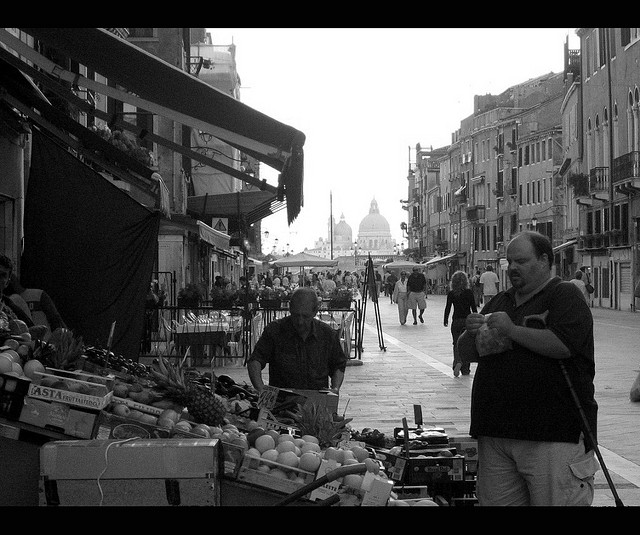 On Via Garibaldi, neighborhood shops sell more soccer balls than Carnevale masks, and there’s not an Internet cafe in sight. Photo by Jorge Fabra, published under a Creative Commons license.

THE NIGHT VAPORETTO PULLS UP AT 4:20 A.M. With a single fluid motion, the slender conductor in thick rubber gloves hitches her line to our floating pier, pulls the boat close, and slides open a metal gate. We early birds board the waterbus and begin the familiar snake run down Canal Grande, Venice’s famous aquatic thoroughfare.

In the pre-dawn light, the colors of the palazzi lining the canal—the cantaloupes and crimsons, ivories and goldenrods—have yet to distinguish themselves clearly. What greets us instead are almost a millennium’s worth of architectural forms: the ornate pointed arches, a reminder of the Byzantine influence on Venice’s early landscape; the monumental dome of Santa Maria della Salute, built in the 1600s to thank the Virgin for sparing the city from the plague; and the towering campanile at Piazza San Marco, from which Galileo showed off his telescope and Goethe first saw the Adriatic Sea. The city’s gondolas are parked and covered in blue plastic; the only other traffic on the canal comes from the occasional grocery boat or a trawling water taxi. The gulls are out in full force, though, and they greet our every turn.

Almost 30 minutes down the canal, I disembark on Venice’s easternmost flank, beyond the Arsenale shipyards. I stroll up the arboreal alley of Via Garibaldi until I reach a statue of the military hero himself, a stone lion at his feet and live turtles swimming amongst the lilies in a moat below. I turn onto Via Garibaldi and walk along the wide pedestrian street until it ends at a narrow waterway called Rio di Sant’Anna. Here, I wait for morning to arrive at my favorite spot in all of Venice.

Surely, every visitor to this city comes away with some particularly beloved place, perhaps attached to a certain time of day. Maybe it’s midnight at San Marco, when the crowds are gone and the quartet at Caffè Florian plays melodies of heartbreaking beauty. Or late afternoon on La Giudecca, with its sweeping views across a wide waterway to the facades of Dorsoduro. Or the Rialto fish market at 9 a.m., when merchants blacken their hands with squid ink and schoolchildren shriek at the live eels.

I found my own spot while exploring on my first day. Navigating the city’s half-dozen districts—called sestieri, or “sixths”—I ducked into passageways so narrow that I could touch both sides with flat palms and still form a W with my elbows. Sometimes I crossed a footbridge, only to have it end at someone’s front door. Other times it led me into a garden of climbing roses, or under an archway into a sotoportego, a covered street with a ceiling of rough-hewn wooden beams.

Not surprisingly, Venice has a wealth of names for its myriad types of streets. While the sotoportegos were often lovely, my favorites were the fondamenti, promenades running directly along the canals, where I got the clearest sense of Venice’s relationship to the water. Not only do the smaller canals serve as roadways—where Italian pop music pours from colorful motorboats with names like Elettra IV and Zéphyros—but they are also Venetians’ backyards, where young men tinker with their outboard motors while shouting from craft to craft like neighbors across a fence.

To me, the sestiere of Cannaregio, which spreads north and west from Piazza San Marco, has the most scenic promenades, some lined with outdoor cafes. Still, the corner I claimed for myself was on the other end of the city, in the sestiere of Castello, a maritime section where the 140-year-old Mutual Aid Society for Carpenters and Caulkers still operates out of two storefronts on Via Garibaldi. Here, neighborhood shops sell more soccer balls than Carnevale masks, and there’s not an Internet cafe in sight. “Everyone’s related in some way to everyone else,” says Jackie Gill, an Englishwoman who runs the nearby Trattoria dai Tosi with her Venetian husband. “It’s very local, which is becoming rare in Venice.” So at 5 a.m. I park myself where Via Garibaldi meets the foot of the canal and wait for the day to begin.

TWENTY MINUTES LATER, THE LIGHT FLICKS ON at another restaurant, Trattoria alla Rampa del Piave, illuminating the bottles of vino and grappa in the window. Located on the fondamenta where the Sant’Anna waterway abruptly ends, the eatery’s hand-lettered sign is old and faded. Still, it’s the morning’s nerve center, especially for the neighborhood men. I pull up to the bar, order a caffè espresso, and watch as the locals come in for their daily brew. Some order theirs regular—a thimble’s worth of the strong, pudding-thick liquid. Others ask the owner to “correct” theirs with Stravecchio brandy. One fellow forgoes coffee altogether, ordering a glass of ruby Port instead. 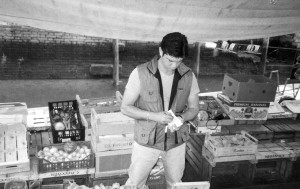 Luca Faé on the Fruit Boat. Photo by Barry Yeoman.

Luca Faé arrives moments later. Muscular and trim, with combed-back hair and an upturned nose, he runs the other corner institution: a floating vegetable stand on a large motorboat, covered with a white tent roof and docked permanently at the very foot of Rio di Sant’Anna. Other vessels come and go, delivering crates of fennel and baskets full of bottled wine to local shops. Luca’s bobbing business, which he calls the Fruit Boat, is the one constant.

For the next two hours, I watch him set up shop. Tan vest zipped over gray T-shirt, cigarette dangling precariously, he stands in the boat as his cousin Massimo tosses him crates from a handcart: giant pea pods, miniature cauliflower, gnarly Sicilian tomatoes we Americans would call “heirloom.” Luca trims the stems from tiny purple artichokes. He arranges the zucchini so the orange-green flowers all face outward, like the sun’s corona. He shows his friends a beet that looks vaguely like the Michelin man, and breaks into a grin.

By now, the green wooden shutters along Via Garibaldi have opened. The air smells like yeast from the bakery across the canal. Sparrows have descended on a pile of uncooked rice—wedding leftovers—in front of the 17th-century Church of San Francisco di Paola. And neighbors greet each other with machine-gun rapidity. “Ciao, ciao.” Four gangly street sweepers approach, jostling like schoolboys, greeting Luca and Massimo in an animated flurry. They park their homemade brooms beside the canal, then disappear inside for their morning pastries. A vegetable deliverer pulls his boat next to Luca’s. The two men are singing the same tune, and for just a moment they perform a spontaneous duet.

At 8 o’clock, the first church bells ring. Luca takes a coffee break, and I catch the vaporetto back for a nap. I’ve been up since 4, and even though I haven’t moved two blocks, I feel like I’ve seen all of Venice.

EVERY YEAR, 14 MILLION PEOPLE visit the tiny city of Venice. Most don’t spend the night, or even patronize family-owned restaurants. With few tourist dollars making their way to residents’ pockets, economic times have been tough for Venetians. This partially explains why the city’s population has dropped by almost two-thirds since 1950.

“They always say Venice lives on tourism, but we have to make it an intelligent tourism,” says Michela Scibilia, a local designer, during the thought-provoking documentary The Venetian Dilemma. One way to travel intelligently is to patronize owner-operated eateries—which are the most authentic ones anyway. Scibilia has compiled a guide to her own favorites, called Venezia Osterie & Dintorni, available in English. 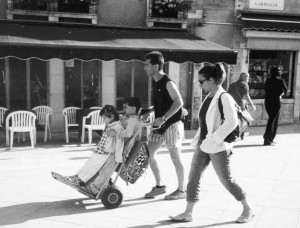 Life on Via Garibaldi. Photo by Barry Yeoman.

That night I visit one of Scibilia’s recommendations: Trattoria dai Tosi, right around the corner from the Fruit Boat. I am surprised when owner Jackie Gill urges me to make a reservation at a pizzeria. But when I arrive at 8 p.m., I understand: This is not a place to grab a slice and run, but rather a gathering spot where extended families from this corner of the sestiere of Castello come to pass the entire evening.

The decor of the dining room is unremarkable: advertising mirrors, paintings by a local artist, thick-beamed ceilings. What makes the evening rich is the human interaction: how every neck turns when a family comes in pushing a stroller; how a father nibbles joyfully on his five-month-old’s tummy; how the servers gingerly step around an alley cat that has taken up residence in the narrow aisle. Every new pizza fills the room with an elemental smell that keeps me reaching for the rosemary bread sticks until my own pie comes, its crunchy crust piled high with spinach and seafood. After I polish it off, my bilingual waiter brings me a ceramic shot glass filled with a licorice liqueur—as cold as my morning’s coffee had been hot, but it is equally thick, and just as potent.

Walking back through the neighborhood, in front of an illuminated Ave Maria shrine built in the brickwork near Rio di Sant’Anna, I pass the family with the baby again. I hear strains of jazz emanate from nowhere, then disappear. I spot Luca’s Fruit Boat, stripped of its vegetables, crates neatly stacked three-high. I don’t think it is the alcohol talking when I realize that to me Venice has never been more intoxicating.