A wander through the barris, or neighborhoods, of Barcelona. 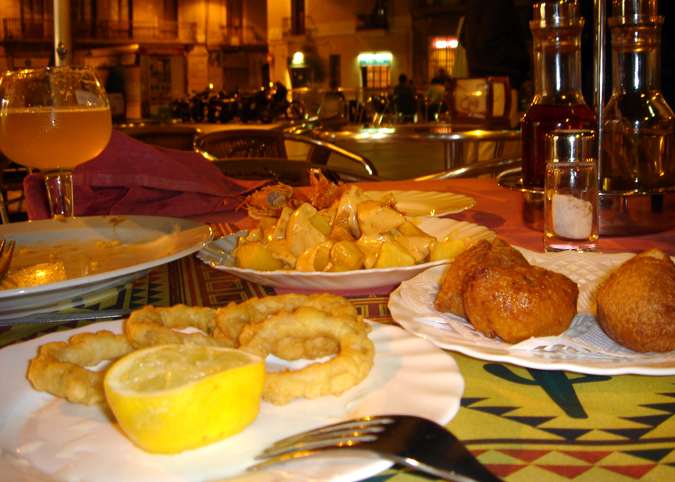 AN INDIGO DUSK IS DESCENDING on Plaça Rius i Taulet, the most atmospheric square. I am sitting under a plane tree, watching a busy Thursday evening unfold. Cafe waiters bring glasses of beer with lemon to the residents gathering at metal tables lining three sides of the plaza. Children chase soap bubbles and tussle over soccer balls. A waxing moon rises over a 19th-century brick-and-stone clock tower trimmed in bas-relief figures of the zodiac.

The clock strikes ten. Its chimes hark back to the time when Gràcia was still a separate village and the baby-blue building across the square was its town hall. In 1870, the tower took on serious symbolism, as the neighborhood erupted in rebellion against military conscription. Catalunya, the region encompassing Barcelona, was never a big supporter of the Spanish crown, and few mothers believed their sons should be forced to fight overseas. On Palm Sunday, the national army stormed Gràcia to arrest the protestors, and in the process shot out the tower’s two bells. For years, the clock’s hands remained frozen. Even after the bells were repaired by a local craftsman, they had to be struck manually every day at noon.

The so-called Draft Rebellion was one of many protests that made Gràcia what it is today: a community of freethinkers. That Catalan spirit is what draws me: I’m looking in Barcelona’s barris, or neighborhoods, for the essence of Catalan culture.

Barcelona and its surrounding region are unique in Spain. Whereas most of the country has traditionally oriented toward the monarchy and the Catholic Church, Catalunya has long prided itself on being secular and democratic. It has its own language, suppressed under the dictatorship of Francisco Franco but now flourishing again. (“Don’t bark,” said signs posted around the city during Franco’s regime. “Speak the language of the Spanish empire.”) And it’s a region that has welcomed, even embraced, outside influence. “There is a deep historical sense of belonging, of a community that understands itself as unique,” says Teresa Vilarós, a Barcelona native and professor of Romance Studies at Duke University, “but one that also understands itself as criss-crossed, and as formed and informed by many, many people.”

Today in Barcelona, Catalan culture can be found everywhere, from the newly renovated Picasso Museum in the Old City to the Sunday noontime sardana dance (once banned, too) in front of the cathedral. Before I left for Barcelona, though, Vilarós said something that stuck with me: “We are a Mediterranean culture. We like the neighborhood. We like the little stores, the plazas, the little cafés.” So the city’s barris are where I decide to look.

In the barri of L’Eixample, Modernista architects like Antoni Gaudí have put a Catalan stamp on the streetscape, creating fantastical buildings with wavy balconies and broken tiles that stress emotion over intellect, nature over structure. In seaside Barceloneta, designed in the 1700s to house the fishermen who were forced to tear down their own homes during the Bourbon invasion, yellow-and-red-striped Catalan flags hang from wires suspended across narrow alleyways. During the summer, when Barceloneta’s tiny apartments overheat, grandmotherly neighbors pull lawn chairs into the street to cool down, socialize, and watch the beachgoers walking by.

Both L’Eixample and Barceloneta are well worth exploring. But two lively neighborhoods slightly further afield really won my affection: Gràcia, which welcomed me into its cafes, and Sants, which dazzled me with devils.

BARCELONA’S BARRIS ARE BUILT AROUND their covered markets, and it comes as no surprise that Gràcia’s were originally named Liberty and Revolution. The Mercat de Llibertat has kept its name since 1840, and it remains a hive of individual stalls run, to a large degree, by women. As I amble through, a fishmonger leans across her counter, shouting to the olive vendor across the aisle. Her stall is protected by bug-eyed hake, sitting on ice and bearing their sharp teeth menacingly. A few feet down, another seafood merchant offers a tub of unfamiliar creatures that look like tiny turtle claws. “Percebes,” she tells me—goose barnacles, delicacies harvested from Spain’s rocky northwestern shores. “You boil them for five minutes. They’re delicious.”

One huevería sells basketsful of eggs, brown ones from chickens and tiny speckled ones from quail. The market spills outside, too.

As I wend my way through Gràcia’s tiny streets, I notice newsstands selling Worker Solidarity alongside Paris Vogue and handbills calling for an end to injustices near and far. But alongside the Catalan tradition of dissent is that strong sense of civic life. Handsome Modernista buildings line Carrer Gran de Gràcia, sporting colored engravings and the trademark curving balconies. All day the thoroughfare bustles with commerce. By 2 p.m., every cafe, from tapas joints to sushi bars, brims with conversation.

Still, the neighborhood comes most alive at night. After leaving Plaça Rius i Taulet, I stroll over to an outdoor restaurant in nearby Plaça de la Revolució. By daylight this was a nondescript square. After dark, though, the plaza fills with the smell of fried cod and the sound of neighbors unwinding. Behind me, on a park bench, sits a stout woman with a warm smile, who tells me she has lived in Gràcia most of her life. “This was a bomb shelter during the war,” she says, pointing to the garage below us. “When the sirens sounded, we would all go underground. It was well made, too, with stone benches where we would sit until it was safe.” When my food arrives, I dig into my paella marinera, and soak in the public life that makes Gràcia feel so alive.

INITIALLY, WHAT ATTRACTED ME TO SANTS—the barri immediately adjacent to Barcelona’s main railroad station—was its strong Catalan identity and rich history. With steam-powered textile mills once dotting the barri, this was the cradle of Barcelona’s industrial labor movement and the scene of several general strikes, including Catalunya’s first in 1856.

What brings me back, though, are the devils. My first day here, while walking through Sants’ sidestreets with their muted pastel colors and wrought-iron balconies, I had noticed a banner advertising a “Gran Espectacle de Foc”—a spectacle of fire—commemorating the 25th anniversary of Diables de Sants. Diables, it turns out, are a Catalan tradition: neighborhood groups that dress in devilish costumes and parade through the streets in a sea of fireworks. During neighborhood festivals (including Gràcia’s Festa Major in mid-August and Sants’ a few days later), they chase spectators, who douse themselves with water to keep from getting singed.

Tonight’s spectacle is being held in Parc de l’Espanya Industrial, a former factory site now converted to a park. When I arrive, workers are setting up a veritable arsenal of fireworks, anchoring them in place.

“Normally, we run through the streets,” Joan Bravos, a Diable, tells me. “Tonight, no.” Inside the park, I order a beer at at a makeshift bar, then weave through the impatient crowd to find a seat on the grass at the edge of a pond. Across the water rises an enormous dragon, jagged and black, the park’s fearsome mascot.

Just after ten, the pond explodes with noise and color. From our left, a rowboat appears, steered by a devil who ferries a young man in a black cape. His face is painted in colored swirls, and he carries a wooden torch. Haunting music blasts eerily. The boat docks across the pond, where women in sheer white gowns lure the caped man from his boat in a sirenesque dance of welcome. They disrobe him from the waist up, fit him with wings and ram’s horns, then bow at his feet as more fireworks erupt in the background. The dance moves around the pond until the dragon is shooting off dozens of red and yellow sparklers (Catalunya’s colors), its temper unleashed.

The evening climaxes in a pyrotechnic display that sends the audience into a cheering frenzy. Knowing this is just a hint of the Diables’ ritual, I want to return during the festivals where the devils race through the barri in (literal) hot pursuit of victims. It’s hard to resist a culture on fire.