As the writer noted over a century ago, the best time to visit New England’s storied coastline is the off-season. 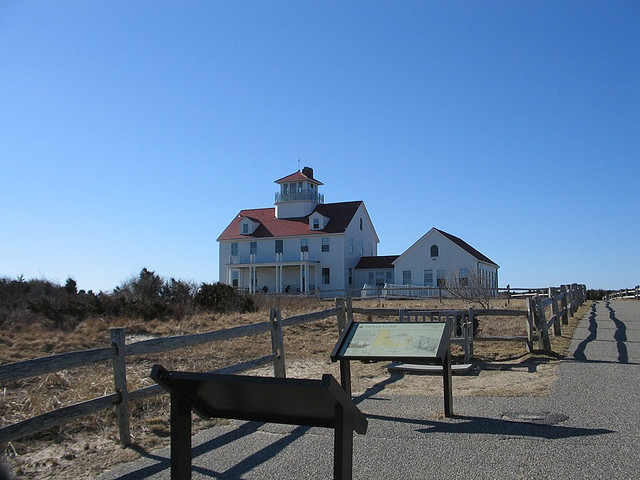 THE YOUNG TRAVELER WAS QUICK-WITTED, ACERBIC, and a bit cranky about having to venture so far from home. Arriving at Cape Cod for the first time, he was not particularly impressed by the village of Sandwich, Massachusetts. “Ours was but half a Sandwich at most, and that must have fallen on the buttered side,” he wrote. As for Provincetown, some 60 miles distant, the inhabitants seemed, well, a bit dull: “I had a little intercourse with some whom I had met in the street and was often agreeably disappointed by discovering the intelligence of rough, and what would be considered unpromising, specimens.”

Henry David Thoreau—writer, house painter, pencil maker, carpenter, abolitionist—visited Cape Cod four times beginning in October 1849. Hiking for miles, he slept in a lighthouse, befriended an oysterman, visited a shipwreck, stumbled upon beached whales, even got stopped on suspicion of bank robbery. The fruit of these adventures was the 1865 book Cape Cod, published shortly after his death at age 44. Many consider it the best book ever written about the Cape.

It’s a quirky opus, meandering from history to biology to mocking humor. Sometimes Thoreau even switches from English to Greek. “He was an odd fish, full of peculiar conceits,” writes author Paul Theroux. Despite these idiosyncrasies, it’s clear Thoreau grew to love the Cape, not because of its people, but rather for its “autumnal landscape of extraordinary brilliancy.” He especially loved the “savage ocean” with its purples, greens, and silvers: “The breakers looked like droves of a thousand wild horses of Neptune, rushing to the shore, with their white manes streaming far behind; and when at length the sun shone for a moment, their manes were rainbow-tinted.”

Thoreau focused his explorations on the Outer Cape, particularly the 25 miles between Eastham and Provincetown that now encompass the Cape Cod National Seashore. He preferred to travel during the cooler months. About travel in the summer, he wrote, “the atmosphere is wont to be thick, and the charm of the sea is to some extent lost.” When the weather turns chillier, “the atmosphere is more transparent, and it is a greater pleasure to look out over the sea.”

I’ve decided to follow Thoreau’s guidance and visit the Outer Cape during the off-season, which runs from Labor Day through Memorial Day. More than 150 years after his first visit, the advice remains sound. For sure, many restaurants and historic sites shutter their doors at this time, and the weather can be unpredictable. Still, the rewards are myriad. B&Bs lower their prices. Traffic dies down to nothing. Dog-walking locals outnumber tourists. Best of all, the beaches and hiking trails are nearly empty, allowing a visitor to experience the Cape in its natural form. As I make my way through dunes, villages, and stunning cedar swampland, I listen for Thoreau’s echoes. They are everywhere.

MY FIRST DAY DAWNS CRISP AND CLOUDLESS. At the Salt Pond Visitor Center in Eastham, I pick up Adam Gamble’s book In the Footsteps of Thoreau. Gamble has taken our hero’s 1849 walking tour and broken it into 25 manageable day hikes. I take off on a six-mile segment that starts at Salt Pond, a 40-foot-deep natural kettle formed by glaciers. Thoreau found these formations fascinating, saying they looked “as if the Cape had sunk in these places, or its sands had run out.” Today, an old wooden sign in the cordgrass warns, “Shellfishing on Sundays only,” and designates which areas are safe for clams and which for quahogs. Cormorants and great blue herons sit placidly on the water.

The hike runs through forests of black cherry, eastern red cedar, arrowwood, and pine. It was not always so lush. Though Native Americans stewarded the land well, clearing small plots for mixed crops, the Pilgrims who settled on the Cape had no such understanding of conservation. By the time Thoreau reached this area, it was nearly barren. He called it the “plains of Nauset, where in the winter the winds howl,” and it stayed that way for another century. Only since the 1950s have the woods started to regenerate.

I pass through a marsh, crossing a long footbridge where a blackbird bides its time. Finally, I reach the sea. At the old Coast Guard Station, I meet Jack Griffith, a ruddy Cape Codder with a goatee and ponytail. He’s looking at the radio tower that rises over the station, thinking about the role the Cape played in telegraph communications. (Guglielmo Marconi selected South Wellfleet, with its tall cliffs, for the first public wireless transmission across the Atlantic.)

“The Chatham radio station served the Northern Hemisphere as far as India,” Griffith tells me. He knows this firsthand: For almost two decades he served as an engineer on Merchant Marine ships that transported Costa Rican coffee, Japanese televisions, and other items around the world. Wherever he traveled, “there was a guy with the old Morse code key. That’s how we did all communication—we relayed through Chatham.” Sometimes Griffith was called upon to repair the telegraph equipment. “I liked the radio operators,” he says. “They were considered odd ducks. The rest of us would go into ports, get drunk. The radio operators would stay on the boat and read.”

We climb over the dunes onto Coast Guard Beach. The strand is wide, nearly devoid of people, and lined with quartzite and other glimmering stones. “They found a dead right whale on the beach,” Griffith says. “They think it was hit by a ship. It was a female of child-bearing age. Not a good thing.”

BACK AT THE VISITOR’S CENTER, I ASK RANGER Jenna Sammartino about the whale. She pulls out the previous day’s Cape Cod Times, which has a feature about the 48-foot creature. “Unfortunately, right whales like to congregate in shipping lanes,” she tells me. Of the 350 North Atlantic right whales remaining in the world, six recently met similar fates, leading scientists to fear they’ll soon become extinct. I tell Sammartino I’ve been reading Cape Cod and she sighs. “The more things change,” she says, “the more things stay the same.”

Indeed. During his third visit to the Cape, Thoreau encountered on the beach south of Provincetown 30 freshly slaughtered pilot whales, “simple and lumpish forms.” Whalers were keeping watch over the bodies. “As I stood there they raised the cry of ‘another school,’ and we could see their black backs and their blowing about a mile northward, as they went leaping over the sea like horses,” Thoreau recounted. “Some boats were already in pursuit, driving them toward the beach… It was an exciting race.”

I prefer my whales living. So two days later, I join a whalewatching trip narrated by a naturalist from Provincetown Center for Coastal Studies. “We are not going to a zoo here,” our guide informs us as our boat, the Dolphin VIII, leaves the harbor. “We don’t have cages here. We are going to a wild environment where whales will be doing the very same thing they’d be doing if we weren’t here.”

P-Town recedes in the distance, its towering Pilgrim Monument diminishing to toothpick size. An hour out, the boat stops. “No, we haven’t run out of gas,” the guide announces. “There has been a whale sighted. We don’t know exactly where.” Suddenly, a chorus of voices cries, “One o’clock!”—and near the front of the vessel, a mammalian body leaps out of the water. It’s a finback whale, the second-largest animal on Earth, known as the “greyhound of the sea” for its long aerodynamic body. It has distinctive gray-and-white washes behind its blowhole and above its eye. We watch as the whale, then another and another, dive and lunge and blow 30-foot spouts of water. For two hours, we marvel at the finbacks’ primal beauty. Nearby, laughing gulls circle and chuckle and fish. A harbor seal swims by, showing us its dog-like face.

We approach the whales at a close distance, though we always stay a respectful three boat-lengths away. “We’re moving these vessels in such a way so as not to endanger the whales. And we’re not changing their behavior,” the naturalist explains. Sometimes there are lulls, when the boat rocks back and forth and there are nothing but loons and gannets to be seen. Then someone yells, “Whale’s up! 9:30!” and we all run to the port side of the boat.

By afternoon’s end, we’ve seen eight, maybe ten, finbacks. I feel as if the man-made world has disappeared. Back in Provincetown, I disembark to fudge stands and surf shops, but not the tourists that flock to town on summer afternoons. In the 1800s, Thoreau predicted, “The time must come when this coast will be a place of resort for those New Englanders who really wish to visit the seaside. This shore will never be more attractive than it is now.” Thoreau had the foresight to visit Cape Cod in the off-century. I have no such opportunity, but for me, coming in the off-season is not a bad alternative.