How one moment during Carnaval in Spain turned into a lifetime of friendship. 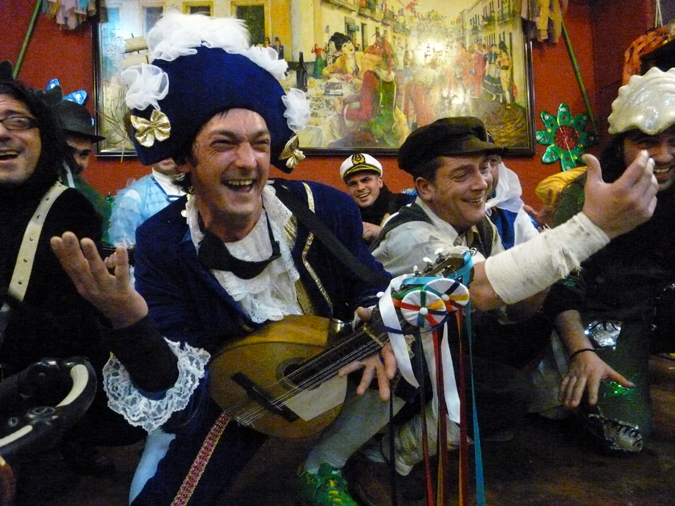 IT WAS 4 IN THE MORNING WHEN WE REACHED Campo del Sur, the road hugging the coastline in the ancient center of Cádiz, Spain. Even after eight visits, I still swoon when I turn this corner. The alley-like streets of the Old City explode into a panoramic vista: a row of pastel houses; turrets of various shapes and heights; the yellow-brick dome of the massive Cathedral. Across the street, Atlantic waves crash hard against a low-stone wall—an old-world counterpart to Havana’s Malecón. Just ahead, two 18th-century sea fortresses mark the endpoints of La Caleta, the small, crescent-shaped beach preferred by Cádiz’s locals.

I was spending the week with a dozen part-time musicians who perform during the Carnaval season in plazas and bars throughout the city. My friends, who grew up together in the old fishermen’s quarter of La Viña, were booked singing from 9 p.m. until dawn. The last gig of the night was a lucrative one: singing their satirical tunes for a high-priced dinner party at an oceanside private club.

As we waited on sofas in the club’s spacious lobby, one of the performers said, “This time, Barry, you’ll sing with us.” When I protested that I didn’t know the words, my friend Silva said he would teach me the opening lines of one song. During the rest of the 20-minute performance, he explained, I would stand in the back row of musicians and gesticulate. Silva waved me across the lobby, and we huddled together until I had memorized the Spanish lyrics.

At 5 a.m., we were herded into the dining room. We formed three rows on a postage-stamp stage. The singing began, and immediately I realized just how difficult it was to gesticulate convincingly. Then—whoosh!—came the applause and it was over.

We took our bows. I thought back to my first visit to Cádiz 12 years earlier. I realized what a miracle it was that we had become friends, and that I had become so enchanted with their city that I would return again and again. 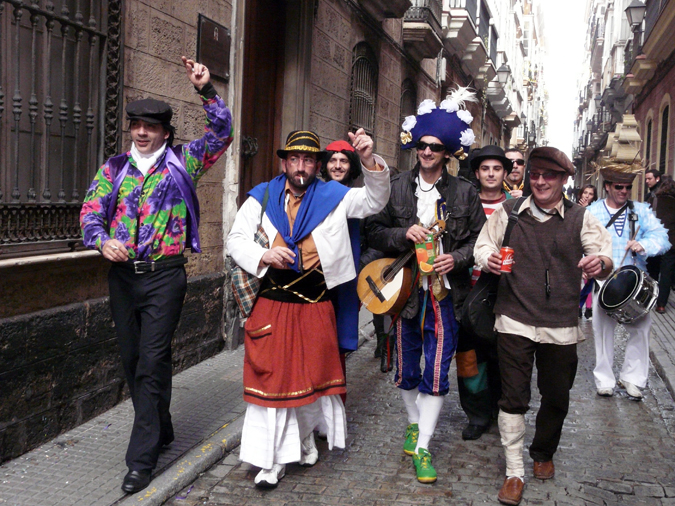 The chirigota walking through the Old City of Cádiz.

IN 1998, I WAS WALKING ALONG the jetty at the edge of La Caleta, which ends at an archway dividing the beach from the Old City. Nearby, on a stone bench, sat a dozen boisterous 20-year-old men, their gangly arms resting comfortably on one another’s shoulders and knees. I mistook their enthusiastic chanting for a call. But when I approached them to talk, my often-severe stutter paralyzed me. Feeling the stress of a foreign language, I took 10 seconds to choke out two words. When I did, they laughed—mockingly, I thought. I stormed off, but then turned around and went back. “I have a problem speaking,” I told them. “I’ve had it all my life.”

I didn’t know how they’d react. To my surprise, they admired my boldness and invited me into their fold. They offered me drinks and the briny guts of a fresh-caught sea urchin. And over the next two weeks, they brought me into the thick of Carnaval. During the afternoons, we sat on the beach and tried to make sense of one another: me educated but rootless, professionally accomplished and musically inept; them rooted for generations in La Viña, working class, largely unemployed, and musically brilliant. At night they took me into plazas where only locals go, where outdoor bars sold cold bottles of San Miguel and friends erupted into spontaneous song.

I felt so welcomed that I returned the following year. And the year after that, and then again. During my most recent visits, I’ve met my friends’ families and watched them become more proficient as entertainers. I’ve followed them through the city on countless nights, swilling sherry and listening to the crowd woot and sing along. More important, I’ve watched them grow up, get married, and start raising their own pint-sized Carnaval musicians.

I have learned the value of returning to a place. I came to Cádiz originally for its 3,000-year history, its raucous Carnaval, and the feeling of the salt spray on my shirt as I walked along Campo del Sur. I return because of my friends, and because a moment of uncomfortable laughter turned into 14 years of hospitality and grace.