Judy Shepard, whose son Matthew was murdered because he was gay, has summoned the courage to share her story.

Originally published in Us Weekly. 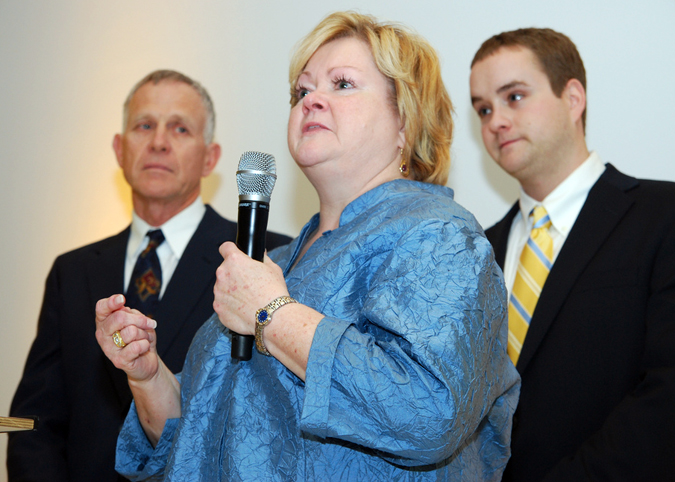 ONE DAY LAST MAY, while she was in Toronto, Judy Shepard looked up and caught a glimpse of her older son crossing the street. Wearing khakis and a blue-checked shirt that hung loosely from his slender frame, the young man cut a winsome and slightly disheveled figure. I have to tell Matthew to roll his sleeves down, Judy thought to herself.

Then she remembered: That isn’t Matthew. Her 21-year-old boy had been murdered in October 1998 by two men who pistol-whipped him, tied him to a fence post and left him to die in the frosty Laramie, Wyoming, night Six days later, in a hospital, he did. Since then, Matthew has become a symbol of the consequences of anti-gay hatred—a handsome college student whose terrible fate shocked the world.

The Matthew she saw in Toronto was actually Shane Meier, an actor who plays the title role in The Matthew Shepard Story, who was shooting a scene on the movie’s set. Although two Matthew Shepard films have already been broadcast—HBO’s recent The Laramie Project and last year’s Anatomy of a Hate Crime on MTV—this movie is the only one to be authorized by the Shepard family. It focuses on the struggle faced by Matthew’s parents, played by Stockard Channing and Sam Waterston, as they come to terms with their son’s murder while simultaneously debating whether to seek the death penalty during the trial of one of his killers (both were convicted). Matthew’s own life story is told in flashbacks. Judy Shepard’s active involvement in the production reflects her transformation from an intensely private wife and mother to a vocal, plane-hopping crusader against bigotry and hate.

Until 1998, she had lived a relatively quiet life. The daughter of two post-office employees, Judy Peck grew up in the small Wyoming town of Glenrock before attending the University of Wyoming. There, on a blind date, she met Dennis Shepard. The two fell in love and, after marrying, they moved 150 miles away to Casper, where Dennis got a job as an oil-safety engineer. The couple eventually had two sons: gregarious, sensitive Matthew and shy, athletic Logan. In 1993, the Shepards moved to Saudi Arabia for Dennis’s work, Matthew attended boarding school in Switzerland, then returned to Wyoming to study at his parents’ alma mater. It was in a Laramie bar on October 6 that he met the two men who would end his life.

Three days after her son’s attack Judy arrived in the United States to discover that Matthew’s beating had made national headlines. When he died on October 12, the family naturally wanted to grieve privately but realized they couldn’t hide. “It was an agonizing thing to do,” she says, “but we knew that at some point we were going to have to tell our story.” They did, four months later on Dateline NBC, and soon after, emails started pouring in “People said, ‘This is a perfect opportunity to try and remind people that God loves everybody.'”

The overwhelming public response led the family to start the Matthew Shepard Foundation, which teaches youths the value of diversity; Judy, 49, is the organization’s executive director. It hasn’t been an easy transition: Judy says she has always been painfully shy. “High-school speech class was my worst nightmare,” she recalls. “My voice would disappear, and I’d shake and sweat and be miserable.” Still, while Dennis continues working in Saudi Arabia, Judy tours the country, speaking about her son’s outgoing personality, his love of foreign cultures and the senselessness of his death. As tough as it is to relive Matthew’s murder night after night—and as lonely as she sometimes feels spending so much time apart from her husband—she considers it her calling to make sure other men and women don’t suffer violence because of their sexual orientation.

UNTIL NOW, JUDY AND DENNIS HAD REFUSED overtures from filmmakers who wanted to depict Matthew’s life and murder, worried that their son would be turned into a Hollywood character. (As for the MTV movie, Judy thought it “sucked” but appreciated the message it conveyed to younger viewers; she didn’t watch The Laramie Project, fearing it would be too painful.) “People kept telling me, ‘If you want the truth to be told, then you’re going to have to do it yourself,'” she says. So she spoke with an agent who then put her in touch with Goldie Hawn.

“It was wonderful to meet Goldie,” Judy says, “not because she’s a celebrity, but because she seemed so kind and committed to what we were trying to accomplish.” Hawn went on to become one of the executive producers of The Matthew Shepard story.

Judy hopes that the movie’s focus on tolerance will make a lasting impression on millions of viewers. “I want people to realize how unnecessary hate is and what it can do when it goes unchecked,” she says. “Matt didn’t have to die. The young men [who murdered him] didn’t have to feel that hate as deeply as they did. We’re losing young people right and left to violence, and it’s time to address the issue.”