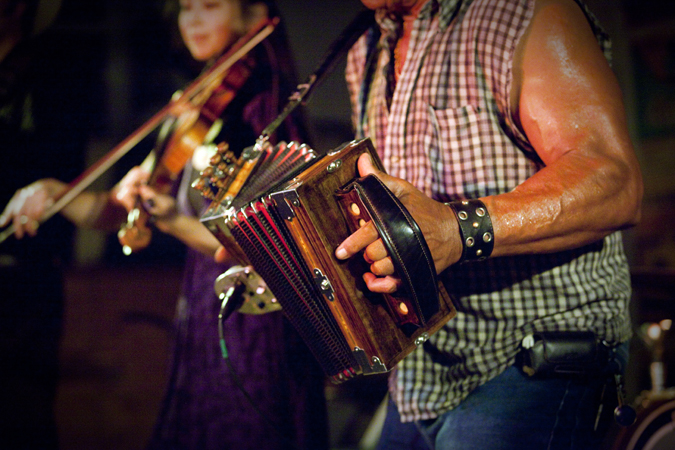 The radio documentary Zydeco Nation traces a little known branch of the Great Migration. Its web site features photos by John Noltner, including this image of accordion player Andrew Carriere.

For Some Who Stutter, Fluency is Overrated  (WHYY The Pulse, 2019)
Why we should rethink the assumption that stuttering is a defect that needs to be eradicated.

How’s Organic Faring in the Farm Bill?  (NET Nebraska and FERN, 2018)
Organic food in the United States is a $45 billion industry and growing. Its momentum could be accelerated, or slowed, by the current congressional battle. Part of the On the Table podcast series.

Baptism by Biryani  (Gravy podcast, Southern Foodways Alliance, 2017)
The story a father-son relationship transacted in the kitchen, and a tiny culinary window into the country’s most diverse major metropolitan area.

Of Hunger and Humanity  (Gravy podcast, Southern Foodways Alliance, 2017)
When Hurricane Harvey unleashed 30 trillion gallons of rain on Texas, thousands of evacuees and first responders needed to be fed. The response was extraordinary.

Reclaiming Native Ground (Gravy podcast, Southern Foodways Alliance, 2017)
Louisiana’s fertile landscape once provided the Pointe-au-Chien Indian Tribe almost everything they needed to eat. Now the land is disappearing, and the tribe is joining together with others to figure out what to do next. Plus a shorter radio version broadcast by WHYY’s The Pulse.

Zydeco Nation (Cal Humanities and Prime Time Radio, 2012)
A radio documentary that tells the story of the French Creole migration from Louisiana to California and the rise of the Bay Area’s thriving zydeco culture. Produced by Barry Yeoman and Richard Ziglar; narrated by Richard.

GulfWatch (KRVS and Louisiana Public Broadcasting, 2011)
A project launched by after the BP oil spill by public ten Gulf Coast radio and TV stations. Barry Yeoman and Richard Ziglar produced 14 radio stories for KRVS in Lafayette, Louisiana. Listen to any story by clicking on its title in the right-hand column of this page. (On mobile devices, the links will be below.)

Below: Listen to Still Singing the Blues (download here)

Elizabeth Edwards: A Political Thinker in her Own Right (Prime Time Radio, 2010)
Broadcast after Edwards’ death from breast cancer, it’s a four-minute excerpt from Barry’s 2007 interview with Edwards for O, The Oprah Magazine. Click below for the broadcast version; the link above will take you to an audio slideshow featuring a 10-minute excerpt, along with photos by Jenny Warburg.

Truckin’ My Blues Away (Prime Time Radio, 2010)
A music-rich hour-long radio documentary about four older Southern bluesmen-and the folklorist who is working to promote them on the world stage. Produced by Barry Yeoman and Richard Ziglar; narrated by Barry.

Below: Listen to Truckin’ My Blues Away (download here)

Picking Up the Pieces (Prime Time Radio, 2008)
A Gracie Award-winning radio documentary about the growing role of parents in caring for veterans who return home severely injured from Iraq and Afghanistan. Reported, co-produced, and narrated by Barry. Produced by Steve Mencher.

Voices of Katrina (Prime Time Radio, 2007)
A radio documentary reported and narrated by Barry. It was broadcast on the second anniversary of Hurricane Katrina. Produced by Rachel McCarthy.

Below: Listen to Voices of Katrina, Part 1

Below: Listen to Voices of Katrina, Part 2

Vietnamese Fishermen Search for the Monetary Value of a Lost Culture
Kenneth Feinberg, the Boston attorney in charge of reviewing claims for the BP oil spill, says he expects to start paying interim and final claims later this month. But as Louisiana’s Vietnamese-American fishing community has learned, some losses are harder to quantify than others. Narrated by Barry Yeoman. Translation and voiceover by An Nguyen.

Pointe-au-Chien Indians, Reeling from the Oil Spill, Watch as Their Land Washes Away
The 700-member Pointe-au-Chien indian tribe south of Houma, Louisiana was one of the first communities to take a direct hit from the BP oil spill. For them, the disaster is ongoing—and part of a larger threat to their ancestral home. Narrated by Richard Ziglar.

200 Ailing Pelicans Change One Man’s Life
The BP spill triggered an outpouring of volunteer energy. Americans lay boom, picked up tar balls, and performed mundane tasks like answering telephones. A few transported and cleaned oiled birds. Regardless of what they did, many volunteers found themselves transformed. Meet party-photographer-turned-bird-lover Bart Siegel. Narrated by Richard Ziglar.

Researchers Call Oil Spills and Climate Change a Devastating Combination
Most of us shudder to imagine the impact of another large oil spill in the Gulf of Mexico, and for good reason. A spill in future decades could have even more far-reaching consequences than the BP spill. The reason is the growing influence of global warming, explains Tulane University’s Torbjörn Törnqvist. Narrated by Richard Ziglar.

Oilfield Worker’s Wife Sets Off for White House—on Foot
Cherri Foytlin is an environmental activist in Rayne, Louisiana. Her husband, Forest Foytlin, worked on a deepwater rig before the BP oil spill. On March 13 she leaves on a 1,200-mile walk to Washington, D.C. Her message to President Obama is surprising and complex. Narrated by Barry Yeoman.

Grand Bayou, Self-Sufficient and Shrinking, Prepares for a Fisheries Collapse
Members of the Atakapa-Ishak tribe have found a creative use for a high-tech fencing material that has protected soldiers in Iraq and strengthened levees outside New Orleans: They’re building gardens that will keep them fed in the event of a seafood shortage sparked by the BP oil spill. Narrated by Barry Yeoman.

For One Cajun Shrimper, a Journey from Despair to Defiance
April 20 marks the one-year anniversary of the Deepwater Horizon blowout, and it’s still too early to measure the complete cost of the ensuring disaster. But we do know that the BP oil spill upended lives in ways that defy quantification. Here’s the story of shrimper Darla Rooks, who lost everything but her fighting spirit. Narrated by Barry Yeoman.

Louisiana Musician Finds His Own “Solution to Pollution”
Drew Landry’s “BP Blues” helped focus attention on the plight of fishermen and oilfield workers after the Deepwater Horizon blowout. Now Landry is collaborating with bluesman Dr. John on a CD of environmental songs. A sampler will be released April 20, the one-year anniversary of the oil spill, during a New Orleans concert. Narrated by Richard Ziglar.

Charter Boat Captain to GCCF: “I’m Not Settling”
The Gulf Coast Claims Facility has predicted that most businesses will recover from the BP oil spill by the end of 2012. Like many others, Bryce Michel isn’t so sure. Business at his company, Topwater Charters in Cocodrie, Louisiana, is down 50 percent this year. Michel worries it may never fully recuperate. Told entirely in Michel’s words.

At the Edge of the Gulf, Dulac Re-Learns Resilience
The Houma Indians and Cajuns who live in in this South Louisiana fishing village have watched its population drop by more than 50 percent since 1990. Now they’re calling upon their traditional survival skills to help them weather some 21st-century disasters. Narrated by Barry Yeoman.

In Desperation, Seafood Workers Sign Away Their Rights
For many of Louisiana’s oyster shuckers, shrimp peelers, and deckhands, survival after the BP oil spill meant accepting one-time payments of $5,000 check and signing away the rest of their rights. Meet Tam Nguyen, who shucked oysters for 30 years before the disaster. Narrated by Richard Ziglar. Translation by Julie Pham. Voiceover by Ming Tran.

Trying to Keep Sane, One Goat at a Time
A year after the sealing of the BP oil well, Louisianans are still dealing with the emotional toll of the spill. Meet Isadore “J.J.” Creppel, a shrimper and net maker who has found his own way to cope. Narrated by Richard Ziglar.