WHEN I AGREED TO WRITE about school lunches for the magazine Mother Jones, conventional wisdom tying junk food to childhood obesity was so rampant that I could have produced a serviceable story with very little research. Reading newspapers and talking with food professionals and government officials, I repeatedly heard that the nation’s biggest nutrition problem was the unhealthy food that tempts children every day: chips and sodas from hallway vending machines, along with Krispy Kreme doughnuts and Domino’s Pizza slices that schools now sell a la carte. 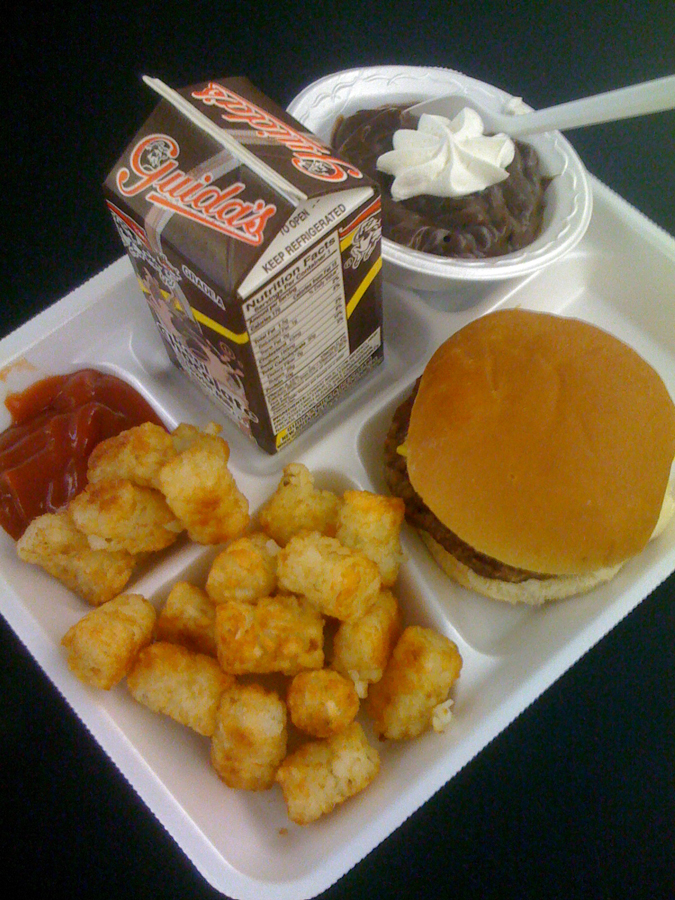 Photo by Ben W, published under a Creative Commons license.

These foods, I was told, distract kids from the nutritious offerings cooked up daily in their lunchrooms. With the National School Lunch Program up for renewal this year, we’d created an obvious panacea for childhood obesity: Eliminate vending-machine snacks and brand-name burgers, pizzas and doughnuts, I was led to conclude, and weight-related diseases will promptly start to disappear.

Defying this conventional wisdom was not easy. After all, it came from people whose opinions we tend to trust, like school dietitians—professionals whose primary interest is (or should be) children’s health. But as I tracked down other insiders, I started to follow a different reporting trail than that of most of my colleagues. And by following this trail, my story “Unhappy Meals” reached very different conclusions about what is happening with children’s nutritional health.

HAVING LITTLE EXPERIENCE COVERING children’s nutrition, I initially cast my source net wide, talking with advocacy groups, nutritionists and academics who had examined the relationship between school lunches and children’s health. One of my first finds was Suzanne Havala Hobbs, a health-policy expert at the University of North Carolina, who had researched the politics of school lunch for her doctoral dissertation. She made one referral that led to others, until I had assembled an impressive collection of sources who had participated firsthand in some of the most contentious political activity involving children’s nutritional issues. They included (among many others) Ellen Haas, a former assistant secretary in the U.S. Department of Agriculture (USDA) under President Clinton; Graydon Forrer, USDA’s former consumer affairs director, and Marshall Matz, a lobbyist whose law firm represents both school nutritionists and the food industry.

The picture these sources painted was considerably more complex than what I had read in the newspapers. The underlying problem, as I came to understand it, is that the 57-year-old National School Lunch Program has a dual mission. It’s supposed to provide healthy meals to schoolchildren, in many cases for free or at a reduced price. But it’s also an agricultural subsidy program that props up farmers’ income by buying up surplus food. And much of that food is the very stuff that clogs children’s arteries and makes them fat. Using USDA’s figures, I learned that in 2001 the department spent a total of $350 million on surplus beef and cheese for schools, compared with $161 million it spent on fruits and vegetables.

Because USDA is a farm agency—not a nutrition agency —its main constituency is agribusiness. In interviewing former department officials, I learned that the commodities program was considered sacrosanct, even though it was known to funnel unhealthy food to children. “This was never talked about publicly,” Forrer told me. “It was talked about after work, over beer: If you were designing a system for health and nutrition, you wouldn’t cordon off part of it and say, This will serve the commodities community.'” But, he added, “You’ve got to dance very lightly around the commodities people, because if you don’t, they’re going to get to the agriculture committee, and they’re going to get to the [agriculture] secretary, who’s always from a rural state. It’s understood that commodity programs exist, that commodity programs will continue to exist, and they’ve got the power.”

For a liberal magazine like Mother Jones, it would have been easy to blame the quality of school lunches solely on the meat and dairy industries and to show collusion between agribusiness and the government. But that would have told only half the story. Interviews with former government officials and others were revealing another, more surprising important player—the 55,000-member American School Food Service Association, which represents the employees who plan and prepare students’ meals. Throughout the mid-1990’s, the organization resisted attempts by USDA reformers to mandate a new menu-planning system (championed by Haas) that would have reduced the amount of unhealthy food in school meals. The association argued that implementing the new system would require expensive computer technology, which cash-strapped districts could hardly afford. To press their case, they hired the well-connected Matz, who convinced Congress to overturn the Clinton Administration’s reform efforts. Until my article ran, Matz’ efforts had received no media coverage, according to an extensive Lexis-Nexis search.

TELLING THIS STORY PROPERLY meant maintaining a level of critical thinking that is often hard to sustain when interviewing people who accept the basic assumptions of the current system. In this case, the primary assumption was that the government had a role in propping up agricultural prices when farmers were suffering. The commodities system was so deeply entrenched at USDA that even my most informed sources didn’t identify it as a problem. Ellen Haas, for example, never challenged the commodities program during her aggressive reform effort as assistant agriculture secretary.

But I consider myself a “radical” journalist, in the purest sense of that word. To me, this means that through my reporting, I try to look for the root causes of problems. The basic hypothesis I developed—that the National School Lunch Program served as a dumping ground for fatty surplus foods—was such a fundamental fact that many of my sources could no longer see the plain truth of it. Additionally, school nutrition directors whom I interviewed were so desperate for resources that they could only see the commodities as a blessing. Sometimes, after a day of interviews, I would find myself adopting my sources’ givens. It took the cool distance of my editor, Eric Bates, to bring me back to the essentialness of that truth.

I also needed to keep some distance from my own fascination with political personalities. While reporting, I heard lots of inside stories. Haas, I learned, had lost valuable allies by cultivating the friendship of gourmet chefs while dismissing the concerns of school food-service workers. Marshall Matz, the lobbyist, supposedly used his credentials as an anti-hunger activist to greenwash his current industry connections. Much of this information made it into the first draft—but my editors at Mother Jones reminded me that my political junkie’s interest was a distraction from the essence of the story.

Finally, bringing critical thinking to bear on this reporting also meant an ability to do simple arithmetic. When I interviewed current USDA officials, they maintained that school lunches were healthy, despite the department’s finding that 85 percent of American schools fail USDA’s own standard for saturated fat, a leading contributor to coronary disease. “There have been tremendous moves to reduce the fat content in school meals,” department spokeswoman Jean Daniel told me.

It required only a pocket calculator to uncover the fallacy in Daniel’s rhetoric. From the USDA’s Web site, I downloaded the nutritional statistics of the commodities served American schoolchildren. I checked the fat content of whole milk, which many schools are required to serve under federal law. Then I educated myself about how to calculate the maximum acceptable fat levels for teenagers. When I plugged in all these numbers, I discovered this: Based on USDA’s own recommendations, an adolescent girl should receive no more than 24 grams of fat, including no more than 8 grams of saturated fat, at lunch time. Yet one portion of USDA surplus chuck roast, plus a glass of the required whole milk, delivers 31 grams of fat and 14 grams of saturated fat.

These calculations made me realize that while the USDA was insisting that schools reduce the fat in their lunches, it is impossible to do so with the department’s own surplus commodities. Schools were forced to accept these commodities to qualify for federal subsidies, and few school nutrition programs could survive without these subsidies.

This Mother Jones story broke just as the nation’s attention was starting to focus on childhood obesity. A similar story ran in The New York Times about two weeks later. Whether these articles will help shift the political debate remains to be seen. After all, conventional wisdom dies hard.

In late January, I watched an interview between CNN’s Paula Zahn and U.S. Health and Human Services secretary Tommy Thompson, which put the blame for childhood obesity on individual actions—children eating too many French fries and watching too much TV instead of exercising. After having spent several weeks thinking about this problem and reporting on some of its root causes, this interview seemed preposterous. Are children supposed to make correct individual nutritional decisions when the federal government is plying them with beef and whole milk rather than fresh fruits and vegetables? Until other journalists start thinking critically about school nutrition—and asking different questions—the national debate over childhood obesity is not likely to shift, and kids will keep getting fatter and sicker as a result.