The Wadden Islands are environmental jewels—and easy to pedal. 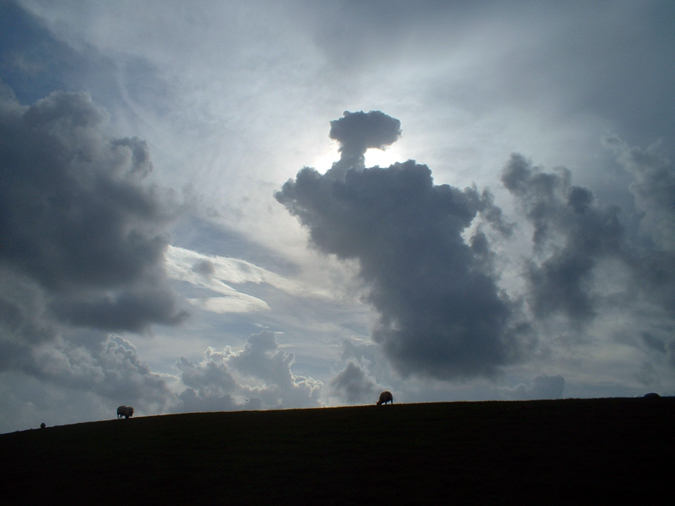 FROM WHERE I SIT ON MY BICYCLE, the dunes of Terschelling Island look less like sand structures and more like well-decorated woolly mammoths. Covered in luxurious marram grass, adorned with the orange berries of the rowan tree, and layered in the subtle purple of heather, their colors and textures animate the landscape of The Netherlands’ northernmost coast.

Arthur Oosterbaan and I pedal along the bike path that bisects the island lengthwise. To our left, we see the backside of the village of Oosterend, with its pale brick farmhouses and terra-cotta roofs. To our right unfolds the coastal landscape. Arthur, a marine ecologist, has offered to show me Terschelling through his eyes today, and as we ride, he tells me the history of this distinctive Dutch sandscape.

“These dunes were once overwhelmed by sheep and cattle, because everyone had the right to graze here,” he explains. “It was called oerol, which means ‘everywhere.'” During Nazi occupation, the Germans put an end to the practice—a good idea for the wrong reason—and afterward, the islanders planted grasses to repair the breaches in the dunes. “Now we don’t want oerol back because the dunes are so much greener and more beautiful.”

As we turn away from the coast, our ride takes us into a birch forest—where we sample a mushroom whose milky sap evokes the taste of cayenne—and then past a village cemetery dating to the Middle Ages. Soon the scenery changes again: We are atop a dike, surrounded by a cacophony of bleating sheep, looking past a salt marsh into Terschelling’s cousin islands in the Wadden Sea. 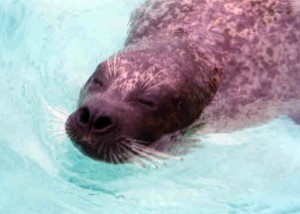 A seal pup going through rehabilitation at Ecomare.

If all this fast-changing scenery leaves me feeling a bit breathless, that’s part of the magic of the Dutch Wadden Islands, members of a larger chain of isles that stretches along the coasts of The Netherlands, Denmark, and Germany. The five islands are laced with 200 miles of bike paths connecting beaches and polders, wetlands and woodlands, plus more than a dozen sunflower-dotted villages. The islands, in turn, are connected to one another and to the mainland by a network of ferries.

Easily reachable from anywhere in Holland, the Wadden Islands have become a favorite summer destination for the Dutch. But the islands—technically located between the Wadden and North seas—are more than holiday getaways. They are environmental jewels, literal hothouses of plant and animal life. “If you walk into the tidal flats and take one square meter of soil, there’ll be more creatures than there are people in all of Europe,” says Horst Wagenfeld, a conservationist who has studied the island chain’s ecology. Shallow waters mean the sun heats up the sea with unusual efficiency, stimulating algae blooms that in turn feed the entire food chain, from worms and small crustaceans to fish, seals, and even humans. Spared from overdevelopment, the islands are a birdwatcher’s paradise. As for the flora: Although dunes form just 1 percent of The Netherlands’ land mass, they contain 75 percent of the nation’s plant species.

For all they have to offer, though, the islands remain virtually unknown in the United States. “How did you ever find out about our tiny island?” a surprised innkeeper on Vlieland asked me when I called to make reservations. On Ameland, an impromptu drinking buddy from the island announced, “You’re the only American I’ve ever seen here.” In celebration of the rare Yankee sighting, he ordered up a round of Wad Water, a local elixir, and offered a toast to the only place he’s ever wanted to live.

MY PLAN IS TO BICYCLE ALL FIVE WADDEN ISLANDS: Texel, Vlieland, Terschelling, Ameland, and Schiermonnikoog. Not all the inter-island ferries run daily, but with sufficient planning it’s possible to “wad-hop” from one island to the next. The logical starting point is Texel, the most popular of the islands and the most accessible from Amsterdam’s Schiphol Airport—just a 90-minute train ride and a 20-minute boat ride. 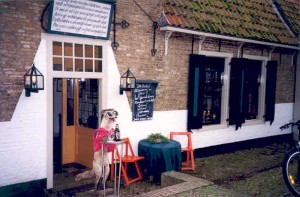 An unusual host in Vlieland.

Arriving on Texel, in the town of Den Burg, I am greeted by a troupe of dancers in costume performing 19th-century waltzes to live fiddle and accordion. The women wear floor-length skirts and headdresses of lace, gold, and silver; the men wear top hats and vests that echo their partners’ color schemes. There is a pleasing stateliness to their dance moves, but instinct tells me that Texel’s real treasures lie far from the craft shops and living-history demonstrations of its most populous village. So I unlock my bicycle and set off beyond the town limits.

For all of Texel’s reliance on tourism, it’s remarkable how quickly one can escape, peddling flat miles of farm roads and sea dikes without ever feeling like one of the crowd. The visual rewards are formidable. In front of a brick farmhouse, I pass an unattended produce stand, with pale pumpkins and giant zucchini, bouquets of sunflowers and bags of yellow beans. Prices are written on a half-hidden chalkboard, and purchases are made by the honor system—there’s a tin box to deposit coins. 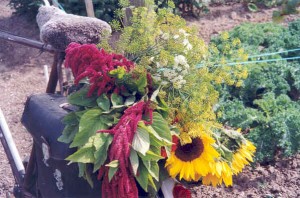 A bicycle loaded up with cut flowers from a garden in Texel.

I do find one popular attraction irresistible. On Texel’s North Sea side, I visit EcoMare, a nature center with an intelligent natural-history museum (curated by Arthur Oosterbaan) and an aquarium. EcoMare’s real draw, though, is its rehabilitation center for sick and orphaned seals. Walking amidst the center’s outdoor pools, I meet Anne, a big-eyed baby harbor seal found two weeks earlier, underweight at 17 pounds, and abandoned by her mother. Now she has gained three pounds, and the center plans to care for her, on a diet of Atlantic Ocean mackerel, until she grows large and healthy enough to return to the sea.

Texel feels like an escape from the world. But after I leave, I realize it was downright bustling compared to the four islands that follow. In Vlieland, I pedal to the end of a dirt road, then walk along a honeysuckle trail and through a field of purple asters until solid ground gives way to wetlands filled with cawing seabirds. At Terschelling, I gather blackberries and the sample fruit and flowers of the ramanas rose, which grows wild everywhere.

On Ameland, I make a circuit of four villages with streets of herringbone brick and high-peaked houses (called eilanderhuizen). Stylized wrought-iron numbers announce the year of their construction: 1619, 1744, 1850. Last, I arrive at serene Schiermonnikoog, a single village surrounded by 20 square miles of national parkland. In the marshes and mudflats, I spot Northern lapwings with their James Dean haircuts, and oystercatchers in tuxedo patterns, bills like orange needlenose pliers. At sunset, I ride to the North Sea and find a beach so wide that the people at water’s edge look no larger than cockleshells. 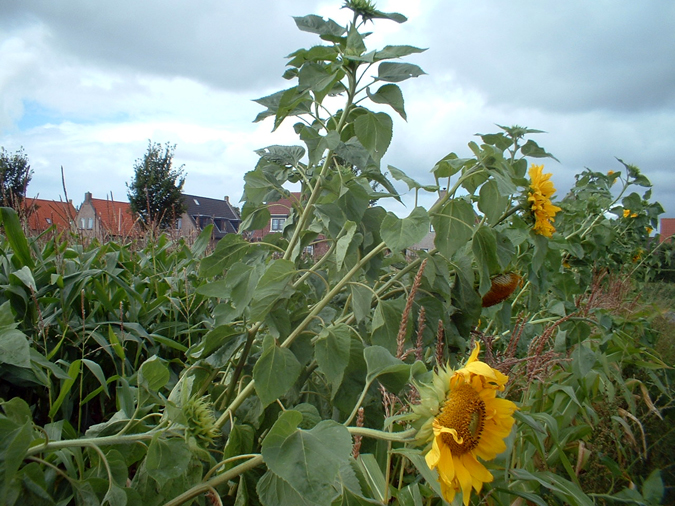 Sunflowers are everywhere on the Wadden Islands.

MY LAST MORNING ON SCHIERMONNIKOOG, a Sunday, I wake to seven chimes from a village church tower. The day has dawned brisk and clear, and I decide to squeeze in one last ride before catching the ferry back to the mainland.

There is no one outside at this hour—no one except the owls and a single rooster, whose calls sound like farewells as I pedal back toward the North Sea. The sun is so low that it makes me squint, and as I turn my head to the west, I see a rainbow—though there’s been no rain today—arcing over the island’s hydrant-red lighthouse.

This time, before I reach the beach, I veer into the Bospad bike trail, cutting through pine forest on one side and dunes on the other. Rabbits and wild pheasant scatter by the dozen. Daydreaming, I imagine an island council dominated by these critters—a coalition of the wild, demanding their habitat be forever preserved.

Birch trees start to appear, luminous in the sunshine. Then forest yields to marsh, an emerald landscape of creeks and ponds punctuated by sea lavender and clover. A hare, long-legged and regal like a tiny deer, darts in front of me; I imagine him as the island’s mayor. A flock of swallows goes synchronously airborne, startled by my appearance. At the end of the trail, cattle graze; they don’t even move from the path as I draw near. One of them, branded number 604 on its hindquarters, ambles over and licks my hand.

A single chime—8:30—marks my return to the village. Early risers drink coffee at a sidewalk tavern; two men tinker with their bicycle brakes. Parents and children emerge onto Middenstreek, Schiermonnikoog’s retail row, shuttered for the Sabbath but still eminently strollable. I lock the bike, and as I fumble for the keys to my bed-and-breakfast, the rooster returns to his diurnal crowing. It’s as if he’s trying to remind me: You might be leaving, friend, but Schiermonnikoog is just waking up.