Tourism officials promote Portugal’s capital as “the capital of cool.” That’s not what keep me returning, though. 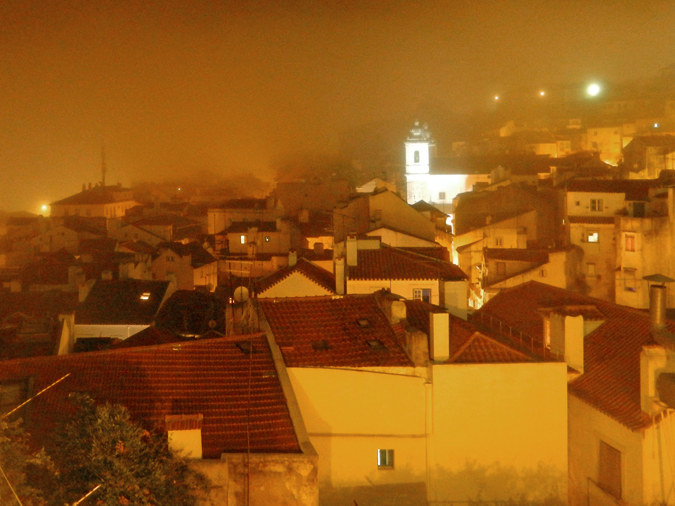 I PAUSE TO CATCH MY BREATH. I’ve just climbed the 90 steps leading from downtown Lisbon to the hillside district of Mouraria, and it feels a bit like a homecoming. With its Escher-like labyrinth of stairways and narrow lanes, this is where the capital of Portugal first cast its spell on me. Up here, neighbors call to each other from one balcony to the next. Groceries-cum-bars sell wheels of cured goat cheese alongside homemade custard pastries. Every time I climb these stairs, I feel like I’m inhaling history: In 1147, when English crusaders invaded Lisbon, they exiled the defeated Moors to these quarters outside the city walls. And in 1755, an earthquake leveled most of Lisbon, but some of Mouraria’s houses miraculously survived.

It is midnight. Passing a whitewashed church, I enter Restaurante São Cristóvão, where owner Maria do Livramento Levy has shut down the kitchen and a jam session is in full swing. In 1966, Mento (as she’s known) moved here from Cape Verde, one of Portugal’s former African colonies. Thirteen years later she opened this restaurant. She has presided regally over its small dining room ever since, with colorful aprons as her raiment and a tight bun on her crown.

When I first visited here several years ago, I wasn’t sure how to feel about Mento, who filled the restaurant with loud patter and gave my feet a sharp kick when they stuck out into the aisle. But she won me over with her mufete—oily fish grilled to a sweet char and served with stewed beans, sliced banana, and hot peppers—and the informal Afro-Portuguese music that fills her eatery every weekend. “If you write me, then I’ll write you,” three musicians sang that first night. “If you forget me, then I’ll forget you.” I couldn’t forget that evening—and now, whenever I return to Lisbon, I’m sure to stop at Mento’s place, with its green-checkered tablecloths and six-dollar dinners. 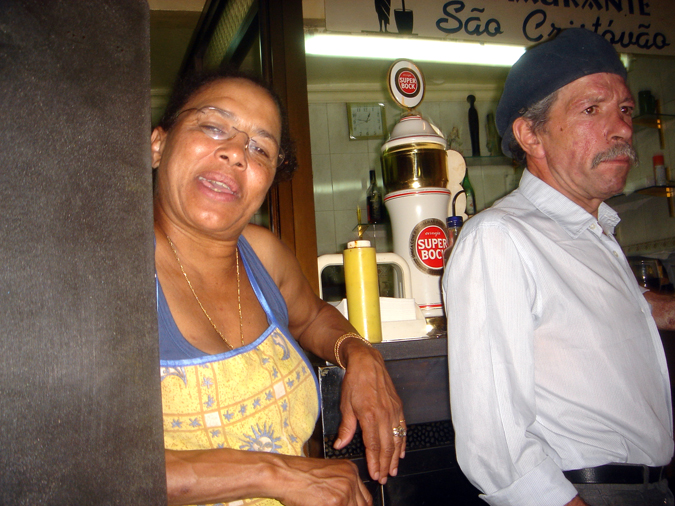 Maria do Livramento Levy has presided over Restaurante São Cristóvão since 1979.

Tonight, as customers finish their meals, Mento sits at a corner table sipping a bowl of soup. Along with two guitarists, someone strums a tiny four-stringed cavaquinho, and another plays percussion with a beer bottle and butter knife. Singing lead is a lanky young man wearing a charcoal fedora. He laughs from the pure joy of music-making, but there is also a nostalgic ache in his voice: the quintessentially Portuguese yearning known as saudade.

I nurse one beer, then another. I know that on other hills, as well as in Lisbon’s lowlands, more fashionable bars and nightclubs are starting to fill up. But on this late spring night, I’m happy to be sitting right here.

UNTIL RECENTLY, LISBON FELT LIKE A COUNTRY COUSIN to the great European capitals. Though better developed than much of the rest of Portugal, Lisbon stagnated, culturally and economically, under a dictatorship that lasted until 1974. But the past decade or so has brought an ambitious construction and modernization effort. Today, Lisbon swells with panache.

World-class chefs serve up dishes like pepper-seared fig salad with caramelized-grape vinaigrette. Former palaces have been converted to luxury hotels. Mojito bars fill the stylish Bairro Alto. The grounds of EXPO ’98, rechristened Parque das Nações, greet visitors with swooping glass architecture, waterfront dining, and Europe’s largest oceanarium. Tourism officials promote this Lisbon as an upscale destination and “the capital of cool.” These new amenities lend vibrancy to the capital and make it easier than ever to visit. Still, it’s two other Lisbons that keep me returning. 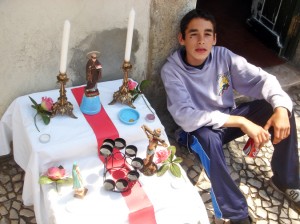 A young man next to his family’s sidewalk shrine to Santo António in Alfama.

The first is Timeless Lisbon, which is reflected in the way much of this city of tiled houses on terraced hills maintains its languid Latin charm. “In parts of Lisbon, you live like a family,” a lifelong Lisboeta told me. “You say hello to the barber, hello to the man who sells roses.” In Praça do Principe Real, old-timers gather every day under the shade of silver linden trees, spread flattened cardboard boxes on green metal tables, and wile away the afternoon in argumentative card games. Across town, in the lush Estrela Gardens, a librarian sets up his kiosk each morning for those who have time for some alfresco reading. Throughout the city, locals stop by pantry-sized ginjinha bars for shots of sour-cherry liqueur. And in medieval Alfama, where the smell of grilled sardines hangs perpetually in the air, wooden Tram No. 28 clangs its way through streets so narrow that it practically scrapes the bakeries and butcher shops along the way. Walking through Alfama, I meet a family that has built a sidewalk shrine of candles and plastic roses, beseeching Lisbon’s patron saint for a miracle. “Santo António, little Santo António,” pleads a handwritten sign, “I ask for a little coin to put in my little bank.”

My other draw is International Lisbon. In the 1400s, Portugal began laying the seeds for a far-reaching empire, fueled by slavery, that eventually came to include Mozambique, Cape Verde, Angola, São Tomé, and Brazil. Portuguese merchant ships also carried pepper, silk, perfume, and porcelain throughout the world. To guard the trade routes, the government established outposts in India’s Goa and China’s Macau. 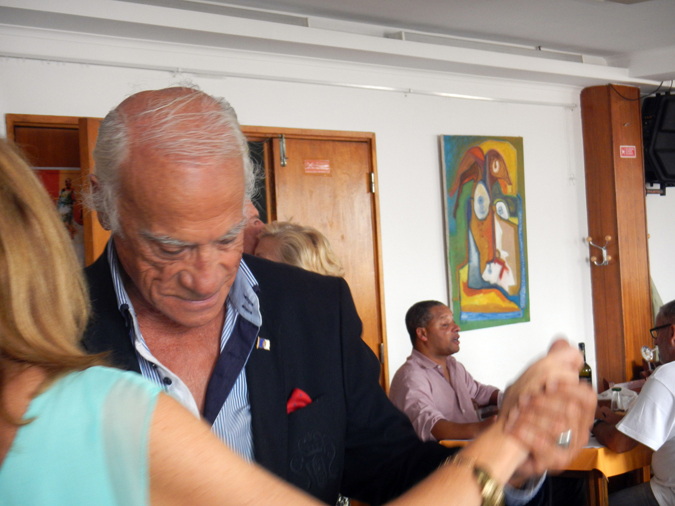 After Portugal decolonized in the 1970s, thousands of immigrants arrived from the former empire. Most settled in the capital. Now, world culture is everywhere, from the street parties outside the Mozambican restaurant O Cantinho do Aziz to the way Brazilians dance on restaurant tabletops in Parque das Nações during World Cup matches. On Tuesdays and Thursdays, black and white Lisboetas gather at the eighth-floor dining room of the Associação Cabo-verdiana de Lisboa (Cape Verdean Association of Lisbon) for long, beery lunches served at communal tables and accompanied by live West African music. Couples of all ages finish their bowls of feijão (stewed beans), then squeeze into the aisles, dancing away the afternoon as singer and guitarist Zézé Barbosa performs songs of saudade.

BOTH TIMELESS AND INTERNATIONAL LISBON are on their liveliest display as summer approaches. That’s when the city is awash in festivals: neighborhood, ethnic, musical, cultural arts, and religious celebrations that literally echo up and down the hills.

One Friday night, I take Tram No. 28 to the top of the city, where São Jorge Castle sits, illuminated by spotlights. I’ve bought a ticket to Lisbon’s Fado Festival, an outdoor concert series showcasing the full-throated Portuguese blues form that has been described as “singing until the voice hurts.” Peering over the castle’s escarpment before the show, my eye follows terra-cotta rooflines all the way down to the Rio Tejo. I pop a euro coin into a telescope and point it across the river at the monumental tower of Cristo Rei. Even from this distance, I can see the folds in Christ’s robes.

At 10 p.m., Maria da Fé glides onstage, wearing a billowing black dress. One of fado’s preeminent divas—she’s been recording since the late 1950s—da Fé has a ferocious following. As she belts out her repertoire, the couple next to me sing and bob and clap so hard I fear for their wristbones. It’s hard not to get caught up in da Fé’s recipe for overcoming life’s troubles:

Watching the feast of Santo António from a window in Alfama.

The concert is a fitting kickoff for a long weekend that will culminate in a grand celebration of native son St. Anthony of Padua (Santo António). Three nights later, on the eve of his feast day, I find myself wandering through the city’s oldest neighborhoods, which have erupted into joyful street parties. In Mouraria, Mento has set up tables on the cobblestone outside Restaurante São Cristóvão and is enthusiastically holding court. In Alfama, sardines are blackening on sidewalk grills while revelers carry potted basil plants in one hand and plastic beer cups in the other.

At 4 a.m., I pass the Church of Santo António. There, vendors sell votive candles, carnations, and religious figurines, while children and adults toss coins at a statue of the saint, trying to land them in his open Bible. Surrounding the statue’s base are so many candles that a miniature inferno has broken out. I know that tomorrow this neighborhood will be far more solemn, as the faithful parade an icon of António through the streets of Alfama. A brass band will lead the procession, which will stop at other churches along the way. It will pick up more saints and more worshipers, until there are thousands of folks in the streets, united in prayer and song.

Amid tonight’s wanderings, I am stopped by a stranger along one of Alfama’s many stairstepped walkways. “Do you know what castiço means?” he asks, using a word that almost defies definition. “It means to feel Portugal hard. To feel it in your soul. I was born here. I grew up here. I will never leave.” Portugal might not be Europe’s most affluent country, he says. “But the people…” He stops, grappling with his English. But I know precisely what he means. 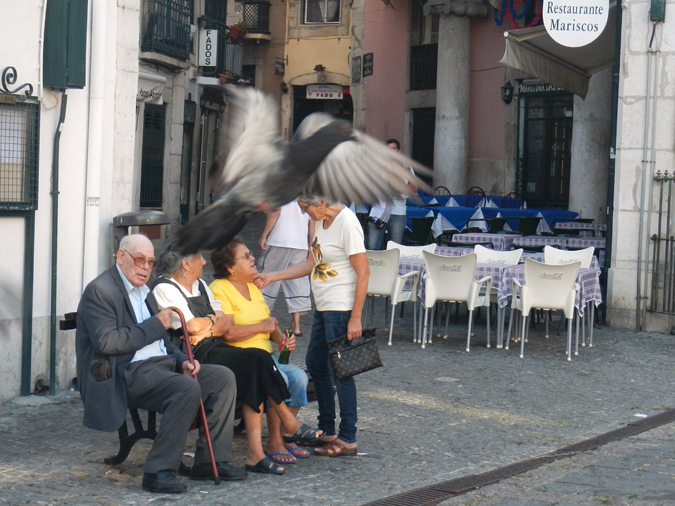 Passing the time in Alfama.