The islands dotting the Baltic waters around Sweden’s capital are fertile grounds for exploration and discovery. 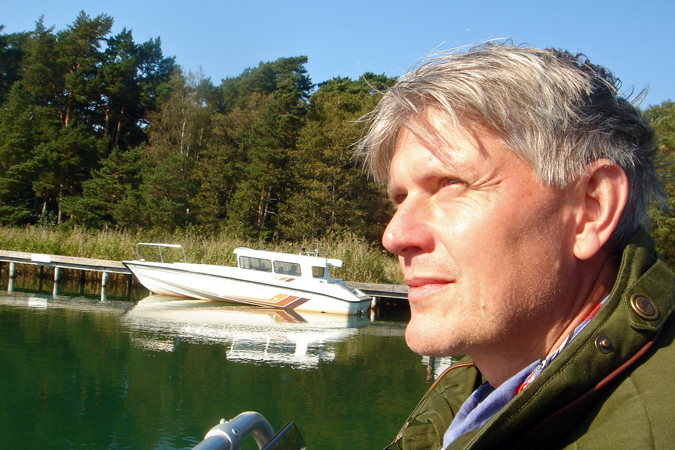 Thomas Hjelm has been promoting Scandinavian island tourism in a way that sustains both local economies and the environment. “We have a sensitive area,” he says. “We don’t want to spoil it.” Photos by Barry Yeoman.

WHEN HE WAS 12 YEARS OLD, BERTIL ROSQVIST bought a 20-foot sailboat with three other friends and spent his summers navigating the waterways of the Stockholm Archipelago, the island chain that fans out from the Swedish capital into the Baltic Sea. Unhindered by adult supervision, the four boys planned their journeys around the islands where their friends lived, hoping to score homecooked meals at the end of the day. Once a week, they’d locate a grocery store, buy postcards and stamps, and reassure their parents they were still alive. Those months, Bertil says, were the best education a boy could have. “When you sail, you can’t beat nature,” he says. “You must learn how fast the wind goes and what to do when the clouds get dark. If you try to do something against nature, you get lost.”

Fifty years later, Bertil and his wife Anna Michalowska greet me on Beckholmen, the innermost of the archipelago’s roughly 24,000 islands. Here, they live in a renovated farmhouse built in the 1600s, and Anna runs a commercial boating school. Stockholm is just a few minutes away by foot and ferry, but their home feels leagues distant from the design-conscious city. With a population of 14, Beckholmen is a working island devoted to all things nautical. The Danish schooner Constantia, built in 1908 and originally used to haul coal and manure, sits at one end of a long jetty. Under a nylon tent just a few feet away, a 19th-century steam ferry undergoes a painstaking restoration. 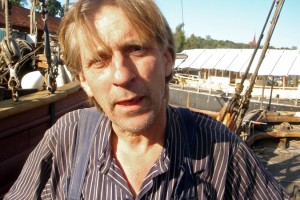 As we walk along the pier, the couple introduce me to their friend Thomas Hellström. He extends a hand to pull me aboard the Deodar, a boat that once trawled England’s Bristol Channel and the North Sea for flounder, Atlantic cod, and whiting. Like many sailing trawlers, this one eventually became a cargo ship, then a yacht. Thomas bought it in 1972 “without any knowledge of this type of boat,” he tells me. Attending shipbuilding classes and consulting old manuscripts, books, and photos, he restored the Deodar to its original 1911 appearance and deck layout. “It has been so natural to do it the old way,” he says. “The guys who sailed these vessels for work knew what they needed to function.”

The calls of sea birds and the creaking sound of rope against a wooden mast mingle with Thomas’s voice. A faint smell of tar fills my nose. This is my first day in Stockholm, but already the water is calling me.

And I’m not alone. Water is something of a national obsession here. “Every spring, Swedes migrate from their candlelit hibernation holes out into the spruce-green archipelagos in tens of thousands of boats—sailboats and motorboats of all sizes, tiny kayaks and canoes, as the entire country spreads out into the summer cottages which dot the rocky islands of both coasts,” writes Randall Williams, a U.S. musician who once lived in Stockholm. “While American blues songs whine about someone being left by a ‘no-good woman,’ Swedish ballads all inevitably return to their own common cultural denominator: the all too brief Nordic summer.”

Today, the Stockholm Archipelago retains the wildness Bertil found in the 1950s, providing breeding grounds for seals and coastal birds. But it also has a well-developed infrastructure, including comfortable inns and a ferry system with frequent departures from the city. To help preserve the islands’ ecology and culture, a group called Skärgårdsstiftelsen (Archipelago Foundation) has restored historic buildings and created nature reserves that are open to the public. Most of the other land is accessible too, thanks to Allemansrätten, the Swedish right of public access. So, the following morning, I’m standing on a Stockholm pier awaiting an adventure. 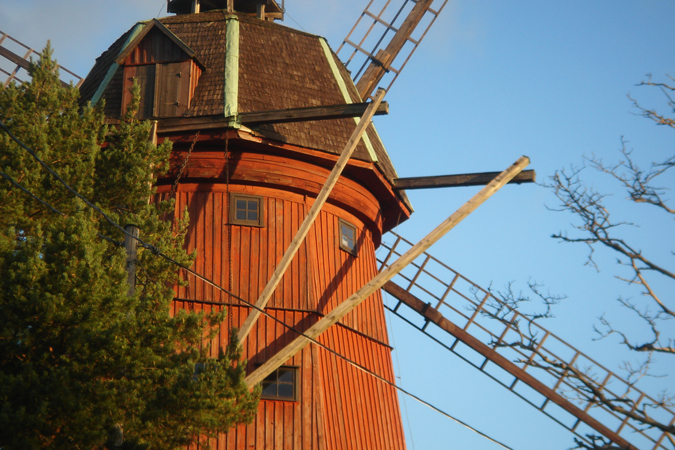 A windmill on Utö.

JUST BEFORE NOON, THOMAS HJELM pulls up in a small motorboat. A resident of Utö, on the southern end of the archipelago, Thomas has come to show me his island. He has Baltic blue eyes, and shaggy salt-and-pepper hair that looks rakish in the sea breeze.

As I climb into the seat beside him, Thomas spreads a navigation map on the dashboard and pulls away from the pier. For a while, we glide down a canal flanked by parkland. He talks enthusiastically about his latest project: He is director of a European Union-funded effort to promote Scandinavian island tourism in a way that sustains both local economies and the environment. “We have a sensitive area,” he tells me. “We don’t want to spoil it. We have gray seals living on small rocks. If you go there with 200 people on a fast boat, you don’t have a product anymore.”

Thomas holds the speed down until we hit the Baltic. It’s not exactly open water: The sea is dotted with islands, simultaneously rocky and green, some large and others mere freckles with a house or two. Swans land here and there. Sailboats rock in the distance.

Still, it’s open enough to pick up the pace. “Ready?” Thomas asks. As he pushes the throttle forward, I reflexively reach for a dashboard grip. Then I let go, giving in to the boat’s bounce and the rush of warm wind against my face. 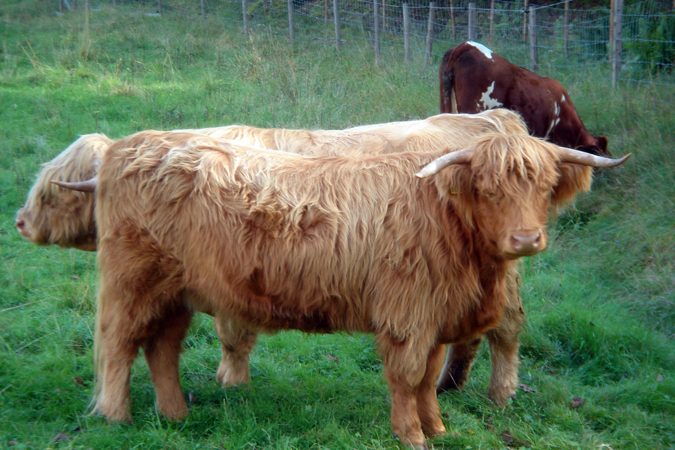 “The Swedes, we love nature,” Thomas tells me. “In the summer, sometimes we find an island where we can be alone, swim naked. We pick herbs we put in our schnapps. Nature lovers come for the smell, the light, the sound. They say it’s quiet, but it’s not really quiet. It’s a different type of sound compared to the city.”

A tiny island with an old stone fortress called Dalarö Skans comes into view; it was built to protect Stockholm from southerly invaders. Thomas cracks a devilish grin. “Now we leave the secure area,” he says. “Going into the jungle.” He reaches into his cooler, pulls out two cans of beer, and steers his motorboat toward the windmill that rises over Utö’s harbor.

UTÖ, POPULATION 240, IS HOME to the country’s oldest iron mines, which opened in the 1100s and operated for more than 700 years. One retired pit forms a canyon with striated cliffs and a deep pond below; it’s visible from a path behind the island’s historic inn, Utö Värdshus. More recently, Utö hosted society balls that attracted the likes of Greta Garbo. Now much of the island is a nature reserve. Setting out to explore, I pedal down a gravel road that cuts through fields and forest, moss and mushrooms. I scramble over rocks sporting long fissures formed by the last Ice Age. After dinner at the Värdshus, I return to the harbor to walk along the docks and admire the periwinkle sky. 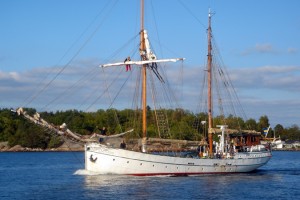 The view from Grinda.

My trip leaves me hungry to see more of the archipelago, so after returning to Stockholm—itself laced with atmospheric islands and waterways—I plan two more outings. One obvious choice is Grinda, a former farm community just over an hour away by ferry. With a permanent population of five, it is entirely a protected reserve that’s home to a handful of pastures where longhaired Highland cattle and Gute sheep graze. I have lunch with Jan Pfister, who owns Grinda Wärdshus and is part of a movement to elevate the quality of archipelago cuisine. My seafood stew is tomatoey and fresh, enriched by aioli that I swirl into my bowl.

Further out on Möja, a fishing island since the 13th century, I rent a bicycle and explore the villages that line the hard-packed gravel main road. The setting is pastoral: barn-red houses, apple trees, low-slung outbuildings, blackberry vines, and wooden piers that snake into the blueblack water. In the cemetery of an 18th-century church, the graves are covered with raised garden beds that sprout lavender, giant crocuses, and miniature roses. Fields of sunflower appear around turns.

The real lure of Möja, though, is Wikströms Fisk, a restaurant owned by the island’s last surviving commercial fisherman and his family. Each afternoon, from May through September, Rune Wikström lays out his fishing net, then sleeps in his small wooden boat until the following dawn. The overnight haul becomes the afternoon’s lunch and dinner. “When I wake up in the morning, I have no idea what I’m going to serve,” his daughter Stina tells me.

Wikströms started as a seafood store in the family home near the village of Ramsmora. “People who bought the fish placed themselves on our furniture outside,” Stina tells me. Watching these impromptu picnics, “we thought, ‘Well, we might boil some potatoes.’ ” One improvement led to another, and six years ago the family tore down the original structure and built a restaurant.

I sit under an umbrella at a wooden table on the restaurant’s garden patio. Stina recommends the herring, stuffed with mustard, fried, and served with flatbread. That’s followed by a plate of smoked whitefish and dill potatoes, washed down with a cold Pripps Blå beer.

By now, the reasons behind Stockholmers’ love of the sea are becoming obvious. I think of what Anna Michalowska told me on my first day here. “I get nervous if I don’t have a free sightline,” she said in Beckholmen. “Water gives me harmony. The main thing for me is not just to see houses and people, but to have the freedom to see far away.” 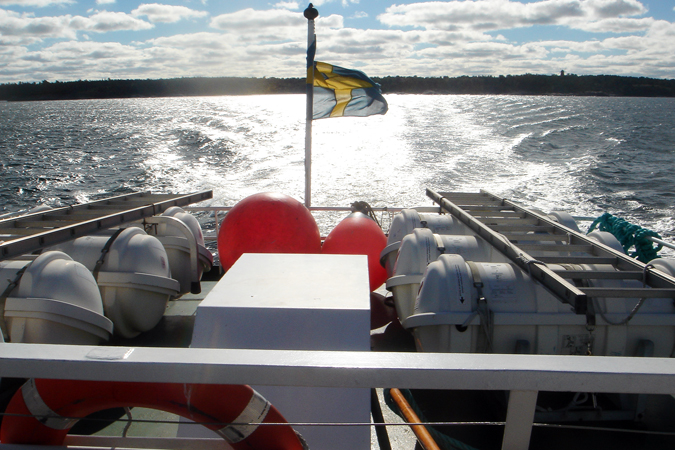 SIDEBAR: Getting around
Note: This article was published in 2006, so the information below is outdated.

Waxholmsbolaget and Cinderella Båtarna are two main ferry services that link Stockholm to the archipelago.

Fish doesn’t get fresher than at Wikströms Fisk, where the morning’s catch becomes the afternoon’s menu. Take a Möja ferry to Ramsmora and follow the signs uphill.

Where to stroll in the city

The city of Stockholm is dotted with islands that are worth exploring. Even today, Gamla Stan (Old Town), the city’s founding island, retains the gnarled street plan of the medieval city. Stuff your map into your pocket and instead meander through cobbled streets, passing houses painted countless variations of terra cotta and mustard. Dotting the facades are ankarslut, stylized anchors that hold in place the iron rods that support the buildings’ floors. During warm afternoons, parts of Gamla Stan can feel overwhelmed by tourists. But it’s easy to escape to quiet side streets—and at night, when the buses leave, the island returns to its residents. Then, you can imagine a century when the triangular Brända Tomten plaza, with its grand chestnut tree and wooden benches, served as a carriage turnaround, or when a 16th-century doorway led to something other than a beauty salon.

The hilly streets of Södermalm sport art galleries and bars. At night they emit a youthful hum. If you enjoy people-watching, find an outdoor table at one of the island’s numerous restaurants and watch the workaday parade.

Skeppsholmen, a former naval base, is now enveloped by greenery. Take in the view of the af Chapman, a retired Navy vessel, from the outdoor patio of Bar Chapman (Flaggmansvägen 8). Afterward, wander around the corner to the Moderna Museet, with its outdoor sculpture garden featuring Niki de Saint Phalle and Jean Tinguely’s Le Paradis Fantastique. A series of Rube Goldberg machines of rusted iron and steel, looking like oil rigs on psychedelic drugs, cavort with giant, colorful polyester characters. It is art in motion, literally. Fantastique indeed.