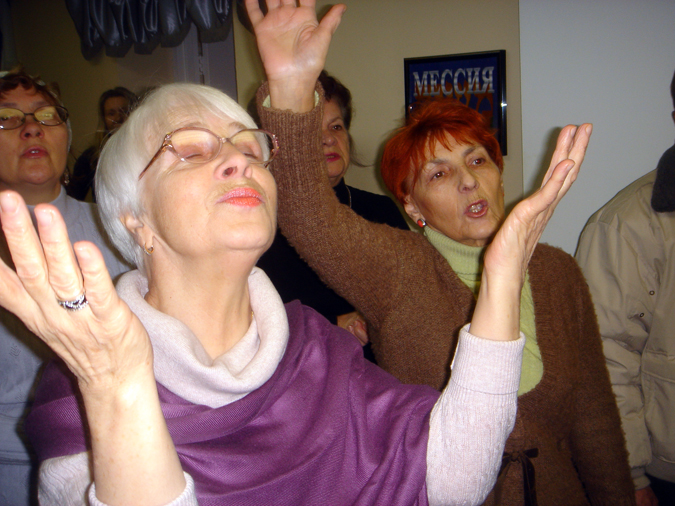 NEW YORK, N.Y.—A WINTER BLAST HAS EMPTIED the streets of the East New York neighborhood of Brooklyn, yet inside the Living Springs Family Center, a storefront Pentecostal church with stamped-tin ceilings, the space heaters are cranked up. So is the music, an upbeat gospel heavy on guitar and electric keyboard.

Thirty Caribbean immigrants belting out Psalm 113 lift and lower their arms to suggest the cycle of the day: “From the rising of the sun; Unto the going down of the same; The name of the Lord is to be praised.”

After an hour, the congregation is primed for this morning’s guest speaker. Karol Joseph, a staff member with Jews for Jesus, has come to deliver a talk on “Christ in the Passover.”

It’s one of several polished programs developed by the $20 million a year ministry to help rank-and-file evangelicals proselytize to their Jewish co-workers, employers and clients.

Joseph, 55, grew up in a Conservative synagogue in Newton, Mass., and flirted with Scientology and Buddhism before a classmate led her to Christ in the 1980s. Now she feels called to “witness,” or share her faith, “to the Jew first,” as the New Testament commands.

Standing behind a table filled with Passover symbols, Joseph describes the seder through a Christian lens.

“Some rabbis tell that the three layers of matzah represent Abraham, Isaac and Jacob,” she says. “But why would the middle matzah be broken, buried and brought back?”

To Joseph it symbolizes Christ the Son, sandwiched between the Father and Holy Spirit. Moreover, the lamb shank evokes “the sacrifice of an even greater Passover lamb, our Lord, Jesus,” she says.

Before the 10th plague, the killing of the firstborn son, “when the blood of the lambs would drip down from [Jewish] doorposts, it would form the sign of the cross,” she says.

Shouts of “amen” erupt from the pews. It’s time for Joseph’s appeal.

“A lot of you know Jewish people,” she says. “We need your help.”

“More Jewish people hear the Gospel from one of you than from one of us,” Joseph adds, explaining that lay Christians are just as important as professional evangelists at winning converts.

After a standing ovation, several people approach Joseph. Shirley Brathwaite, a home health-care aide originally from Trinidad, says she would like to share her beliefs with three elderly Jewish clients without intruding into their lives or getting fired by her agency.

“I know these people really need help,” Brathwaite says, her words lacking the sophistication of professional missionaries but every bit as passionate. “They’re lost. They’re looking for the Messiah to come, and they’re looking in the wrong direction. Some of them might die in sin and go to Hell. We should really tell them, you know?”

Brathwaite knows this will be a long-term process. Four months later she still hasn’t summoned the courage to approach her clients.

“I don’t know what to say to them,” she says in a worried tone.

Still, inspired by the Passover presentation, she plans to call Joseph and ask her how to move forward. 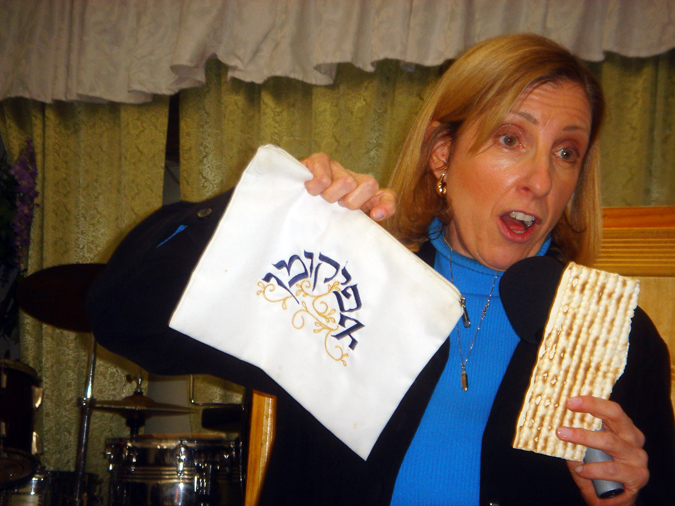 Karol Joseph of Jews for Jesus tells prospective evangelists about “Christ in the Passover.”

ANYONE WHO HAS ENCOUNTERED STREET EVANGELISTS with their cartoon broadsides knows that Christian efforts to win Jewish souls are nothing new. Yet the evangelical movement’s numbers have swelled of late, with much of its work happening off the streets.

Hundreds of organizations now exist to persuade Jews that their salvation depends on accepting Jesus as Messiah. Many of these groups are connected through a network of organizations with media- and Internet-savvy staffs, as well as well-oiled fund-raising operations.

While Catholics and mainline Protestants have eschewed the practice, some of the largest evangelical denominations—Southern Baptists, Assemblies of God, Missouri-Synod Lutherans—have stepped up their conversion efforts. Independent missions have been on the upswing, too.

Last year, Jews for Jesus completed a five-year tour called “Behold Your God” that brought its message to 53 cities worldwide. Chosen People Ministries saw its income grow by 31 percent, to $7.9 million, between 2003 and 2006. The Phoenix-based Jewish Voice Ministries International says that since 1993 it has drawn 500,000 people to festivals and concerts aimed at evangelizing Jews in Eastern Europe, South America and India.

Some call themselves synagogues and incorporate such practices as bar mitzvah and circumcision. JTA research turned up more than 300 such congregations in the United States; the Association of Messianic Congregations puts the figure at 438.

Yet there are no well-established methods to track the movement, which is diffuse and sometimes operates underground, experts say. Jews for Judaism, an anti-missionary group, follows 900 organizations in North America alone and calculates that $250 million annually is spent around the world. Estimates of the number of Jewish-born Christians and self-identified Messianic Jews worldwide range from 60,000 to 275,000.

Israel has more than 100 Messianic congregations, says Yaakov Ariel, associate professor of religious studies at the University of North Carolina and author of Evangelizing The Chosen People.

“Thousands of young Israelis—graduates of Israeli schools, graduates of the army—are in Messianic congregations,” he says, adding, “Almost all of them come from non-Orthodox homes and many from secular backgrounds.”

What’s more, evangelicals perform an increasing share of the charitable work in the Jewish state.

Last year, Chosen People Ministries brought $50,000 worth of food to southern Israel, where Jews had taken refuge from the conflict on the Lebanese border.

Mitch Glaser, the ministry’s president, says his staff was “buying food from grocery stores in Jerusalem and schlepping it seven hours to Eilat.”

“Was that evangelism? It might be,” he says. “We did talk about our love for the Lord as we did it.”

Back in the United States, as the movement has boomed, so have its educational institutions. Some of the nation’s leading evangelical schools, including Criswell College in Dallas and Western Seminary in San Jose, Calif., offer accredited programs in Jewish studies or Messianic Judaism.

Chosen People Ministries has teamed up with California’s Biola University to create a three-year master’s program in Messianic Jewish studies. The Union of Messianic Jewish Congregations has an institute—linked informally to an evangelical seminary in Florida—to ordain Christ-centered “rabbis.”

Myriad publications on how to win over Jews are readily available, including theological journals and a four-volume set titled “Answering Jewish Objections to Jesus.” An international umbrella group, the Lausanne Consultation on Jewish Evangelism, brainstormed about strategies this summer in Hungary.

Groups such as Jews for Jesus partner with large evangelical congregations, such as the McLean Bible Church in Vienna, Va., to train members in reaching Jewish neighbors and co-workers.

Only rarely does the issue attract mainstream attention, as when conservative pundit Ann Coulter told CNBC talk-show host Donnie Deutsch earlier this month, “We just want Jews to be perfected.”

Jewish leaders are far from unified about how much damage these efforts inflict.

“I am not convinced that this is a major crisis,” says Rabbi Gary Greenebaum, U.S. director of interreligious affairs for the American Jewish Committee, explaining that the number of actual conversions appears low.

Greenebaum worries, though, that when churches fund Jewish-directed missionary work, it creates an obstacle to interfaith dialogue.

“Is it an existential threat to the future of the Jewish community? No,” says Rabbi Craig Miller, education director of the anti-missionary task force at the Jewish Community Relations Council of New York. “Is it hurting Jewish individuals? Yes. The loss of any Jewish person is a tragedy for family and friends, and it’s also a loss of that person’s creativity and input to the Jewish community as a whole.” 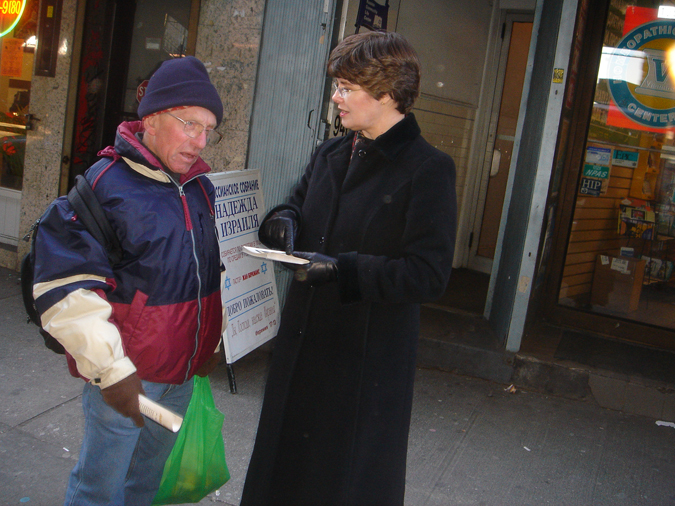 UNDER THE CLANKETY-CLANK OF AN ELEVATED TRAIN, the vertical banners lining Brooklyn’s Brighton Beach Avenue welcome visitors to “Little Russia by the Sea.” Once vibrant with working-class Jews, then suffering a period of decline, the Brighton Beach neighborhood was enlivened in the 1980s by a new wave of immigrants, many of them Jewish and from the former Soviet Union. Now pedestrians stroll past furriers, a Russian ballet school and grocery stores offering sausage, knishes and smoked herring.

Through a doorway marked with a Star of David and up a staircase is the Russian Community Life Center, a modest cluster of rooms that has become one of Brooklyn’s missionary hot spots. On a Saturday morning, 60 immigrants in black plastic folding chairs watch as center director Leslie McMillan dons a head scarf and lights a pair of Shabbat candles. She recites the traditional Hebrew blessing, but with an addition: “B’shem Yeshua,” which translates as “in the name of Jesus.”

The Shabbat candles, a worship leader explains in Russian, “is like a symbol of the light of Jesus Christ, our Savior.”

Evangelists have identified Russian Jews as particularly ripe for their message. They lived under a government that for decades suppressed worship, leaving them with few religious preconceptions.

“It’s been forbidden fruit for generations,” says Eugene Lubman, a 31-year-old computer programmer from Kiev, Ukraine, who serves as vice president of the center’s board.

“There was a spiritual hunger, an understanding that the things in the world aren’t an end in themselves. People have been gravitating to any spirituality they can find.”

Lubman, who was born Jewish, believes that Messianic congregations welcome immigrants more readily than do some religious Jews.

Perhaps this “hunger” explains why the center has attracted so much Christian interest. Chosen People Ministries helped launched the center and New York’s Redeemer Presbyterian Church provides funding. Jews for Jesus leads services for those curious about Christianity, and a Russian Baptist church holds Bible studies. Another congregation sponsors worship services for recovering drug addicts and their families.

Two summers ago, the center became a staging ground as Jews for Jesus missionaries descended on Brighton Beach en masse as part of their Behold Your God campaign.

Throughout the year, the center teaches sewing and offers citizenship assistance. But the bulk of its evangelism comes by way of inexpensive English classes—two hours of small-group instruction followed by 30 minutes of mandatory Old and New Testament study.

“We absolutely have to do this,” Lubman says. “There’s so little support for immigrants. They don’t know the language. They can’t get a job. They’re absolutely lost in the new society.” If missionaries can help newcomers acclimate, he insists, “we really deserve their ear.”

Jewish leaders offer a less charitable spin. They say symbols like the Star of David confuse older Russians, who grew up under state atheism.

“They have no radar,” says attorney Marcia Eisenberg, who works with the anti-missionary task force at the Jewish Community Relations Council of New York. “They have no context to understand this is not Jewish.”

Critics add that evangelists’ successes do not occur in a vacuum.

“I always thought missionary efforts were an early warning system,” says Jonathan Sarna, professor of American Jewish history at Brandeis University. “If you want to see where the weak parts are in Jewish communities, you look at where the missionaries are. Most recently you find missionaries focusing on immigrants, the elderly and students—all areas where the Jewish community has not done its work.”

Oleg Nemtsov, a 32-year-old massage therapist, arrived in Brooklyn from Belarus in the 1990s. A teenager at the time, he enrolled in an Orthodox yeshiva where other students “treated me like a dog,” he says. They mocked his poor eyesight, provoking scuffles that led to Nemtsov being expelled after two months.

Struggling with depression, Nemtsov met some evangelists in a Brighton Beach park. He was touched by their kindness.

“I started picturing Christ as this sweet, wonderful friend,” he says.

Nemtsov struggled with his religious beliefs for another decade, but now he is considering devoting himself to Christian evangelism.

“I don’t want anyone to burn in hellfire,” he says.

Still, Nemtsov admits, he has some doubts about his new faith.

“I’m pretty vulnerable to being misled,” he acknowledges. “I just need to relax, talk to God and see what He shows me.”

Read the rest of Messianics Rising

Part 2: Messianics are praying the “Shema” and preaching Jesus