Sometimes the best way to discover the charms of a city—even one with as glorious a history as Athens—is to avoid the obvious and start with something much smaller in mind. 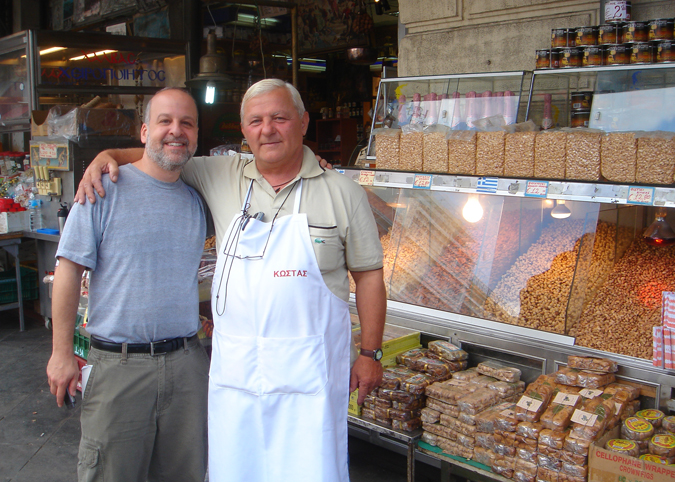 The author with pistachio seller Kostas Karakostas, who has run his shop Athenaïkon for more than 50 years. “If there’s one thing I’m ashamed of for being a Greek,” he says, “it’s that I have not managed to do one thousandth of what my ancestors did.” Photo by Efthimios Kalos.

THE FRUIT VENDORS ARE ENTICING US with a singsong pitch: “Parte ta kalitera kerassia!” (“Get the best cherries!”) Sausage salesmen hand out samples, and immigrant butchers are busy showing off their chops. It seems this morning that all of Athens has descended on the Central Market and myriad stores that fill the surrounding streets. As my friend Efthimios Kalos and I meander through this kaleidoscope of sights and sounds, a thousand diversions, from carob syrup to pet chipmunks, vie for our attention.

Today, though, we will not be distracted. Efthimios and I are on a quest. We have met in the Greek capital to search for the perfect pistachio. 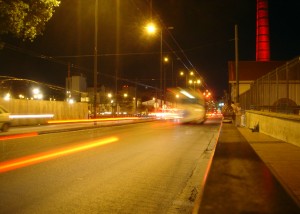 The red chimney belongs to the former gas works that give Gazi its name. Photos by Barry Yeoman unless otherwise noted.

I already know what you’re thinking. Pistachios? In the city that produced the Parthenon? Actually, that’s the point. In Athens, the monumental and mundane rub shoulders every day. The city center bustles with merchants selling shoes, old license plates, jars of thyme honey, and rough-hewn blocks of olive-oil soap. Men drink strong coffee and play backgammon outside widget shops. Motorcycles whir by incessantly. Late into the evening, nightspots in neighborhoods like Psyrri, Thiseio, and the former industrial district of Gazi fill with well-dressed locals. Yet the city’s classical grandeur is never far away. One minute, you’re outside the food market To Pantopolion, sampling organic wines from a volcanic Greek island; the next, you’re walking past an archaeological dig at the Acharnian gate of the ancient city wall. Ahead of you rises the Acropolis, its buildings the architectural embodiment of the rise of Western artistic and intellectual life.

Many words have been used to describe the monumental aspects of Athens. Considerably fewer have been penned that describe the mundane—and what could be more mundane than the humble fistiki, as the Greeks call the ubiquitous green nut? Suited to poor soil and arid climates, it flourishes in much of Greece, and is smaller and more flavorful than its American cousin. It’s sold roasted or raw, encased in honey, and cooked into nougat, baklava, brittle, and spoon sweets.

Efthimios, who grew up outside Athens and now lives in Paris, has had a playful running argument with his father about where to find the best pistachios in town. Today, we are combing Central Market in an effort to settle the dispute. 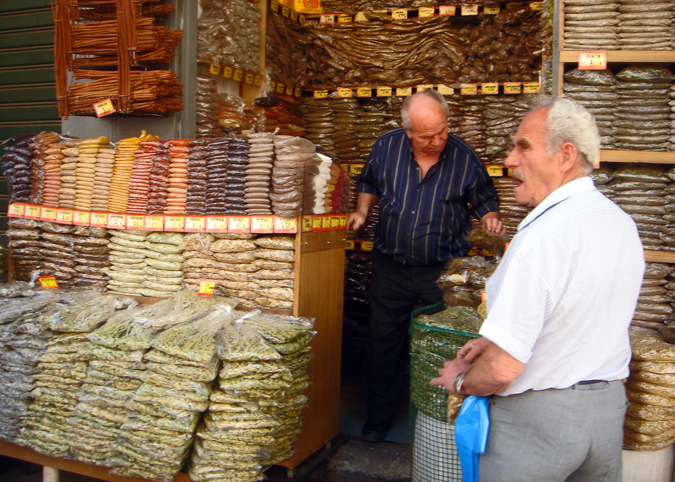 Greek entrepreneurship on display: Near the Central Market, one stall is stacked with bags of Greek mountain tea, chamomile, and ground spices sorted by color.

The heart of the marketplace is a 19th-century building with fretted iron awnings. The contrast between the ornate architecture and boisterous commerce inside could not be more striking. Butchers in stained white smocks wield fearsome cleavers. Behind their glass counters hang animal parts I never knew people ate. Tile walls resonate with the rhythmic declarations of fishmongers that their squids and clams are freska, or fresh. Across the street, in the open air, produce vendors offer up deep-red tomatoes, eggplants striped purple and white, and piles of juicy yellow loquats. Latter-day Saint Francises carry bags of dried cat food, attending to the furry and feral.

Greek culture is entrepreneurial by nature, and the sheer number of shopkeepers around Central Market is dizzying. One stall is stacked ten feet high with bags of Greek mountain tea, chamomile, and ground spices sorted by color. Cheap plastic flowers are sold across the street from pricey perfumes. And pistachio stands abound. Making our way from block to block, we sample nuts from Megara, Oropos, and Lamia, buying small bags of the ones that strike our fancy. Then, amidst our buying spree, we meet a man who can only be described as the Pistachio Sage.

Kostas Karakostas has run Athenaïkon, his shop at Athinas and Aristogeitonos streets, for more than 50 years. He has a ruddy face and crinkly eyes, and he shoulders his nation’s classical history with both respect and a bit of melancholy. “If there’s one thing I’m ashamed of for being a Greek,” he tells us, “it’s that I have not managed to do one thousandth of what my ancestors did.” Still, the man knows his nuts. Kostas rattles off the various health benefits of pistachios, which are high in the cancer-fighting nutrient selenium. He tells us fistikia have kept him financially healthy, too. “Forty years ago, in the time around Easter, I wasn’t in the best of economic situations,” he says. “I loaded a cart with a huge mound of pistachios. God helped. I sold it all in two hours, and I was able to survive for a week.”

Kostas offers us samples from Aegina, a nearby island considered to produce the nation’s tastiest pistachios. Walking away, I crack open the bag. “They’re really rich,” I say. Efthimios tries some, too, but he reserves judgment. “I’m going to give you a blind taste test later on,” he says, “because I think you’re under a spell right now.” 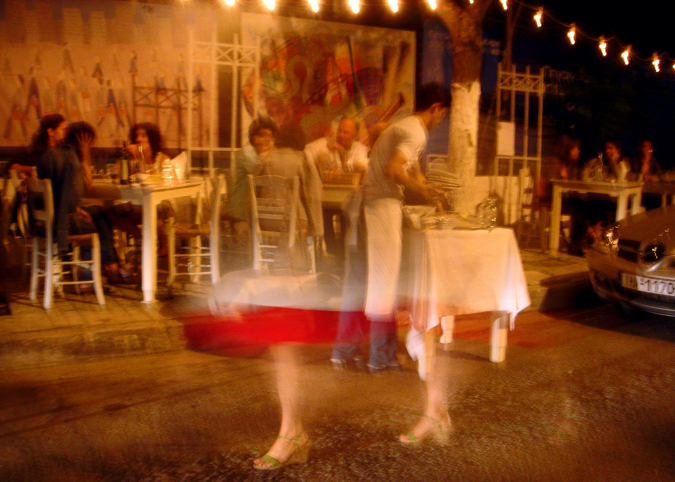 Part pf the charm of visiting Athens is dining al fresco in the former industrial district of Gazi.

JUST A FEW BLOCKS AWAY from Athenaïkon, Panepistimiou Street showcases Athens’ finest neoclassical architecture—and no example is more eye-catching than the University building, with its bright frescoes depicting 19th-century ruler King Otto flanked by a panoply of gods and heroes. Behind it rises Lykavittos Hill, the highest point in the city, its steep rock face adorned with the yellow blooms of the prickly pear. We’d climbed the 900-foot Lykavittos the night before. When we reached the treasure-filled Agios Georgios chapel at the summit, we took in a panoramic view that extended for miles. 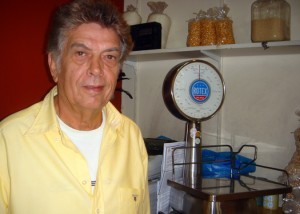 Panepistimiou is lined with bookshops, marble-floored arcades called stoas, and the fashionable department store Attica. Next to one of those bookshops, at No. 49, sits Stelios Tsaknis’ fistiki shop. Opened by his father in 1938, it’s easy to miss: a pantry-sized room filled with transparent bins and a rotary telephone mounted on the wall. But Stelios’ pistachios are gourmet: organic, processed by hand, and are guaranteed, he says, to be from Aegina. The smallest bag costs an eye-popping 13 euros (more than $19). This is millionaire’s food: Stelios fondly recalls the day Aristotle Onassis bought his 300 best friends one kilogram of fistikia apiece. “It’s the nicest memory I have of pistachios,” he says.

Outside, we loosen the ribbon securing the crinkly bag. “They have a nice light flavor,” Efthimios says. “A bit shallow, actually, but nice.” Soon we’re devouring them. “They’re addictive,” he says. “We shouldn’t have started.”

We round a corner, passing a dig of the old city fortification, and find ourselves at the Greek Parliament in time for the hourly changing of the guard. It’s a delightfully over-the-top ritual, in which evzones—specially trained soldiers in pleated skirts and tasseled caps—fan out across the plaza in synchronized goosesteps, then return to touch the pompoms on their red clogs with those of their counterparts. Afterward, as we head for the Temple of Olympian Zeus, Efthimios confiscates the pistachios. “Why don’t we put these in your pack,” he asks, “so we don’t have to walk through the Valley of Temptation?”

AFTER A FEW DAYS, WE DECIDE to travel to the source.

The fast boat to Aegina takes only 40 minutes, and we arrive at a port town whose main street is lined with date palms, waterfront restaurants, and small-scale neoclassical buildings. At the pistachio growers’ cooperative we meet Nikolaos Koundis, who tells us the history of the Aegina pistachio. It seems a Syrian diplomat introduced fistikia to the island over a century ago, and it became a favorite crop of the agricultural elite. The nut didn’t catch on popularly, though, until a crop disease caused grape production to plummet shortly after World War II. Pistachios helped transform Aegina from a fishing island to a farming one, with 120,000 trees now in production. But Nikolaos worries that development pressures on the island may threaten the crop that’s recognized by the European Union for its unique flavor. 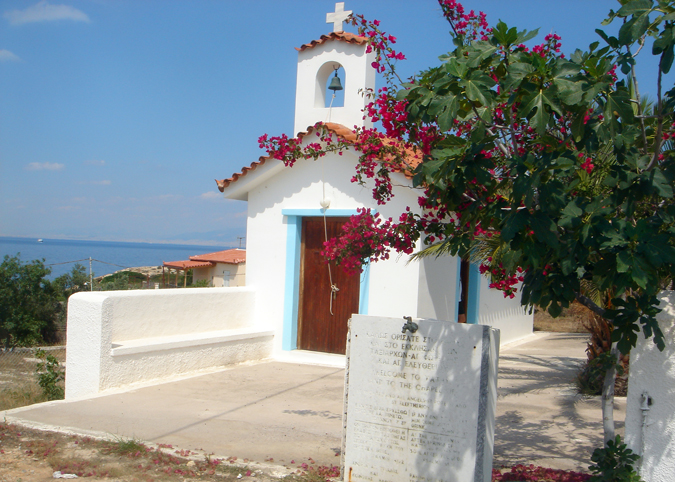 Aegina is not just the source of the best pistachios in Greece; it’s also scenic and close to Athens.

The island is lush and hilly. With the afternoon free, we rent a four-wheeled moped and go exploring. Circling the coast, we feel the wind against our faces; it carries the aromas of sage, fig, and pine. We climb a terraced hill to the Temple of Aphaia, built circa 500 B.C. to honor a nymph worshiped on the island as the daughter of Zeus. The ruins evoke Aegina’s zenith, when the island minted Greece’s first silver coinage and produced some of the region’s fleetest runners. Back then, Aegina and Athens were bitter enemies; after decades of war and a two-year siege by their powerful nemesis, the islanders surrendered in 457 B.C.

We press on, the mopeds straining as we climb to Palaiochora, an abandoned medieval city that once was home to 300 churches. Alone on the hillside, Efthimios and I explore some of the 32 churches that still remain, a few with their frescoes partially intact. The uphill footpath grows steeper and finally disappears, but we make it to the topmost structure. At the peak, we are rewarded with a view of all of Aegina, and beyond that the Saronic Gulf and Athens itself.

THE WINNER OF THE BLIND TASTE TEST? Not even close: Of the nine samples, we both chose the fistikia from the kiosk run by the growers’ cooperative at the Port of Aegina. By then, the outcome didn’t matter much. I was reminded of the Greek poet Konstantinos Kavafis, who wrote perceptively of journeys and destinations. “Pray that the road is long,” he advised in the poem Ithaca, “that the summer mornings are many, when, with such pleasure, with such joy you will enter ports seen for the first time.” The quest for the perfect pistachio brought us to ports, marketplaces, and temples, not to mention lively conversations with strangers. And that, to paraphrase Kavafis, is what an odyssey is all about.

SIDEBAR: Getting around
Note: This article was published in 2008, so the information below is outdated.

The Metro connects the airport and downtown; it also serves Piraeus, where boats depart regularly for Aegina. Buy boat tickets at any Piraeus travel agency or hsw.gr.

Eridanus
Most of the 38 rooms in this neoclassical building have hydromassage showers, and some offer Acropolis views.

Sardelles
This atmospheric seafood restaurant occupies a prime location in Gazi, across from the Technopolis cultural center (a converted gas works). Sit outside, enjoy a reasonably priced meal, and watch the parade of well-dressed young Athenians. Reservations definitely suggested.
Persefonis 15
(011) 30-210-347-8050

Arrive at To Pantopolion at the right time, and you might be offered a taste of distilled grape wine flavored with cinnamon and cloves. If not, choose from caper pâté, pickled field greens, and other upmarket Greek foods.
Sofokleous 1

At Lesvos shop, you’ll find specialty foods from that Greek island. Check out the sun-dried tomatoes, which come jarred with strawberries or ouzo.
Athinas 33