Observers from the National Lawyers Guild monitored the scene, watching for police misconduct. In the days before the march, police raided activists’ homes, along with the headquarters of several protest groups. 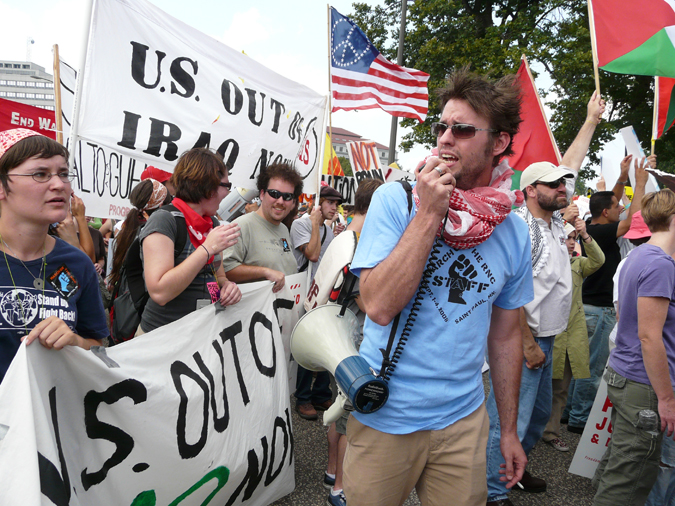 Jeremy Miller leads a chant at the 2008 RNC protest. Photos by Barry Yeoman.

GROWING UP IN MOUNT AIRY, N.C., 26-year-old Jeremy Miller was a preacher’s son for whom “standing up for what is right” meant voting for Republican candidates. He supported President Bush and shared his parents’ belief, he says, that “America is based on Christianity and the war is just.”

At 22, Miller started working at a Greensboro factory, loading boxes onto trucks. When he moved into a supervisory position, he says, he heard other managers discuss speeding up the line, or penalizing employees for not making production quotas. “They were talking about how we could squeeze every little bit out of the workers,” he says. “Like they were animals.”

That was the beginning of Miller’s political transformation. He started reading Lenin and Marx, then realized he needed to do more. “As soon as you make that break, you want to fight for what you understand is right,” he says. “Immediately, I wanted to get on the horse and do as much as I could.” He got involved with Students for a Democratic Society (SDS), a campus-based organization that calls for “revolutionary transformation” and takes its name from the group founded by Tom Hayden in the 1960s. Miller worked with the SDS chapter at UNC-Chapel Hill before moving to the mountains and becoming the regional coordinator at UNC-Asheville. Last month he helped organize a rally after U.S. Immigration and Customs Enforcement raided Mills Manufacturing, an Asheville-area defense contractor that makes parachutes, and arrested 57 immigrants on charges of using falsified IDs.

This weekend, Miller and 17 others from Asheville drove to St. Paul, Minn., for an anti-war demonstration coinciding with the first day of the Republican National Convention. They joined a crowd estimated by the media at 10,000 people, who marched spiritedly from the Minnesota State Capitol to the Xcel Energy Center, where the GOP was getting ready to hear from Laura Bush and Cindy McCain.

“People will be watching this convention,” said Kosta Harlan, an SDS leader from Carrboro who helped plan the St. Paul demonstration. “We’re marching so that, when the delegates are trying to get to the convention center, they’ll see a sea of people there to indict them for the crimes they’ve committed.”

Yesterday morning, as a steamy heat enveloped St. Paul, the war opponents gathered on the Capitol grounds. Military families and veterans assembled away from the hubbub. Scarved radicals calling themselves the Anti-Capitalist Bloc sat in a circle and discussed whether to hold their own unpermitted protests. A brass band called Rude Mechanical Orchestra, whose tuba player wore a cheesehead hat (“Torture is Cheesy”), accompanied a vocalist who sang, “Here’s to the man and his motherfuckin’ war games.” 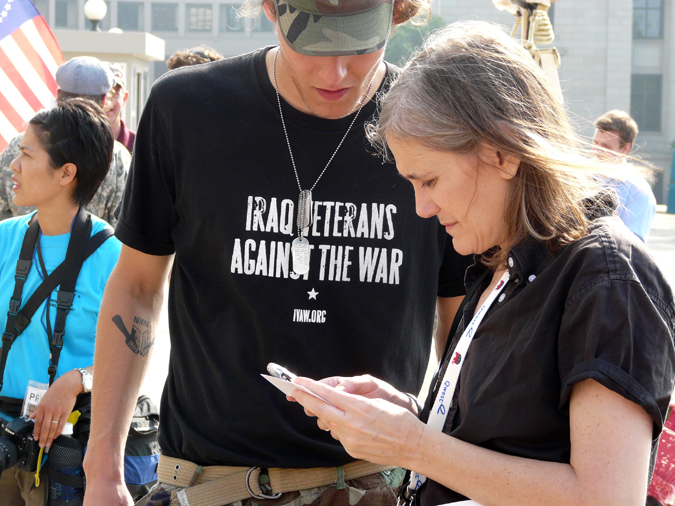 Smaller groups promoted their own agendas: advocates for immigrants, Palestinians, and welfare recipients; Somalis opposing Ethiopian military occupation; opponents of the Dalai Lama. (“For unconditional military defense of Chinese deformed workers’ state!”) A large ice sculpture spelled out the word DEMOCRACY; when part of it collapsed, a little boy ran to his parents calling, “Democracy is falling!”

Observers from the National Lawyers Guild monitored the scene, watching for police misconduct. In the days before the march, police raided activists’ homes, along with the headquarters of several protest groups. Semi-automatic rifles drawn, they ordered occupants to lie on the ground, conducted searches, and handcuffed and detained dozens of people. “The police have a history of trying to break up protest before a convention,” said Des Moines attorney Sally Frank, one of the Guild observers. “They don’t seem to be able to distinguish between protest, civil disobedience and violence. They try to make the first two into the third.”

Harlan, the Carrboro organizer, spent much of the weekend “trying to assure people it’s still going to be a safe march,” he said. For the vast majority of demonstrators, the march did proceed without incident. As it left the Capitol, many of the North Carolinians lined up with a larger student contingent. Jeremy Miller, holding a bullhorn, led them in a chant: “War and occupation / will never bring liberation! / That’s bullshit! / Get off it! / This war is for profit!” He wore a red kefiyyah, the traditional Arab men’s scarf, around his neck, and a blue march-staff T-shirt with the sleeves rolled up. His hair stuck out in all directions.

Not all was peaceful, though. Some breakaway protesters smashed windows and blocked roads. Police responded with tear gas, pepper spray and rubber bullets, and almost 300 people were arrested, including an Associated Press photographer and Democracy Now! radio host Amy Goodman. In an interview with the Minneapolis Star Tribune, Guild attorney Gina Berglund called the police response “completely out of proportion.” Some of the more confrontational activists were members of SDS, but according to Miller and Harlan, none of the North Carolina members were involved.

As the peaceful mainstream of the march neared the GOP convention, police in riot helmets lined the route, as did pro-war counterprotesters. With identical American-flag placards, they offered a uniform message: “Victory over terrorism / Let our soldiers win!” “I think they’re confused, simplistic, still living in the 1960s,” said Hannah Lieder, who rode her bike over from Minneapolis for the afternoon.

The protest turned even closer to the Xcel Center. Just before marchers were funneled through an alleyway of eight-foot temporary metal fences, another counterdemonstrator called out, “Thanks for exercising your First Amendment rights. I fought for them!” Miller’s group responded with a chant: “Tell me what democracy looks like! This is what democracy looks like!” It was a rare moment of agreement. 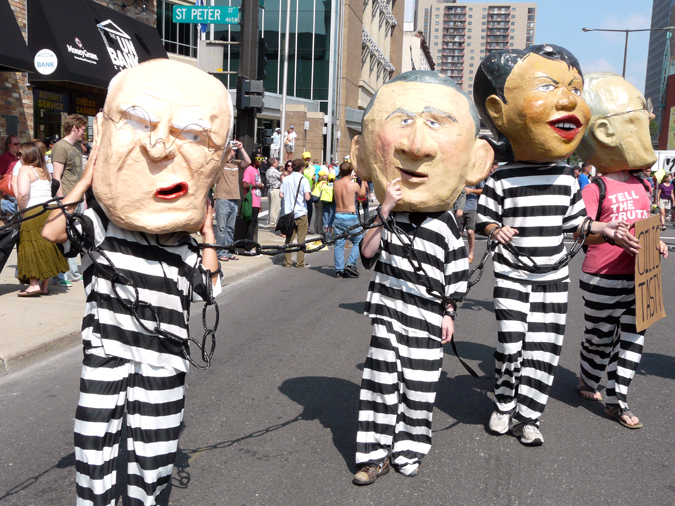 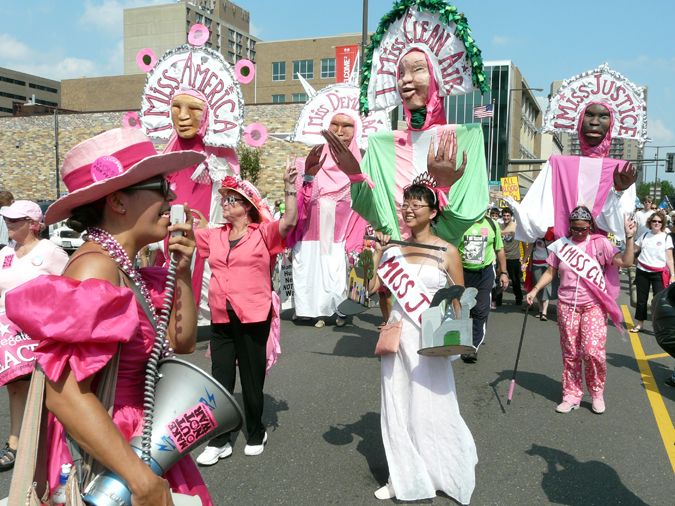 Giant puppets were some of the main attractions of the protest. 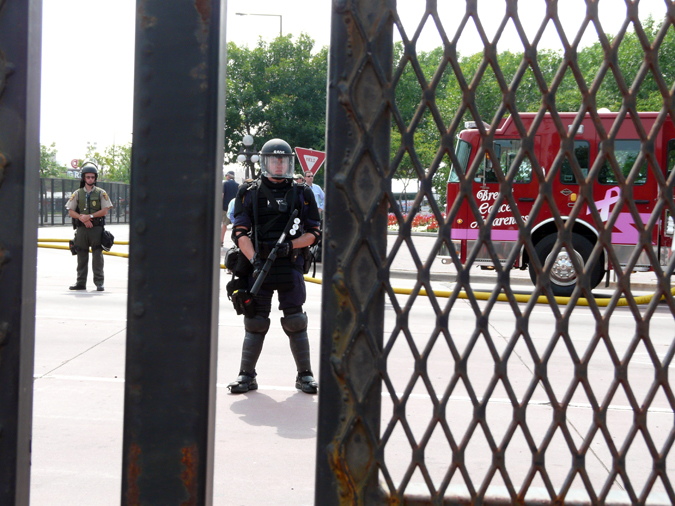