On North Carolina’s Amendment One, the fault line was not racial—it was urban-rural. 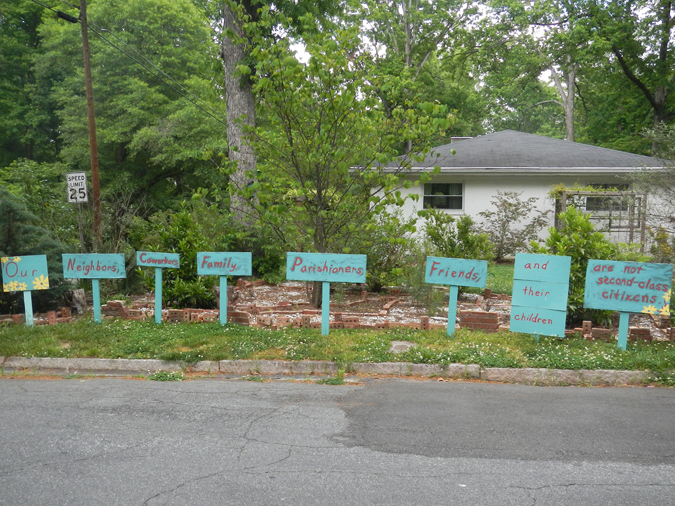 IN THE WEEK SINCE NORTH CAROLINA VOTERS adopted a constitutional amendment banning recognition of any “domestic legal union” other than heterosexual marriage, a consensus has formed among journalists about African-American complicity. According to this narrative, black voters let their Protestant traditionalism trump any sense of fairness toward lesbians and gay men—and became the critical voting bloc that gave Amendment 1 its landslide victory. Although the language has been cool this time around, it nonetheless has echoes of the widespread vilification of black voters after California passed the similar Proposition 8 in 2008.

“Citing deeply held religious objections to homosexuality, African-Americans, many of whom are evangelical Christians, have consistently voted for state bans on gay marriage, most recently in North Carolina,” reported NPR. The Charlotte Observer declared that “many conservatives and African-Americans set political differences aside to vote along spiritual lines.” An Arkansas Democrat-Gazette columnist reported overwhelming support for the measure among black voters and speculated that “perhaps they think being sold into bondage simply because of skin color commands a greater grievance than not being able to get married on account of the body type to which you are naturally attracted.” The Wilmington Journal, a black newspaper on the North Carolina coast, reported that, for African-American voters, “religious convictions won out.”

With President Obama declaring his personal support for same-sex marriage the following day, North Carolina’s vote became the springboard for a national conversation on African Americans, gay rights, and the 2012 presidential race. “I wonder if this will not create a crisis of conscience for some black voters, especially religious voters, especially older voters, who were supportive of Obama before and now have to say, ‘What is most important to me, do I need the brother to be re-elected and what we talk about on Sunday aside?'” author and cultural critic Toure said on MSNBC’s The Last Word. “Or I got my God, my Bible, my minister and we’ve been talking about this for years, and I need to focus on that and maybe I’ll stay home.”

There’s a problem with this story line: It ignores the actual results of the election, which show that the fault line in North Carolina was not racial at all, but rather urban-rural.

It’s impossible to calculate exactly how black voters came down on Amendment 1, because there was no exit polling and voting precincts are rarely single-race. What is clear is that urban voters opposed the amendment; rural ones supported it; and that division cut cleanly across the color line.

But urban black voters rejected Wooden’s warnings that homosexuality would cause “the extinction of the human race.” Not only is African-American religious belief diverse (of course)—but even conservative Christians are informed by more than just their faith. “There is this long fundamentalist tradition in big chunks of the African-American community, and that tradition tends to come down as anti-gay,” says Jim Lee, a 73-year-old black artist who spent decades doing activist work in North Carolina. When he was growing up in Durham, he says, the bullying of boys perceived to be gay was common. “But at the same time, some of the most respected and revered adult leadership and mentorship was coming from people who were either closeted-but-known gays or pretty outwardly gay. These were ministers and teachers and in one case a physician. There was this tension—and as with any conflicted population, some people wash out on one side and others wash out on the other side.”

There was much to nudge black voters toward the “no” camp. The Rev. William Barber II, president of the state NAACP, campaigned hard against the amendment, calling it a right-wing distraction from pressing issues like health care and education. “However you feel about same-sex marriage, you should always be against putting hate and division and discrimination into the very heart and framework of our Constitution,” he said in one radio spot. Prominent black officials, including Mayors Anthony Foxx of Charlotte and Bill Bell of Durham, took similar stands, as did some clergy. Those public statements reinforced the personal relationships that many urban North Carolinians, black and white, have with their gay and lesbian neighbors. “When you meet people, you work with them, you play with them, then you’re more prone to ally with them—once you get to know that the demons you’re told exist aren’t real,” says the Rev. Carl Kenney, a Durham minister.

Once you leave North Carolina’s larger cities, along with a handful of college towns and coastal resorts, the electoral map changes dramatically. Much of the state is small-town and rural, and those areas formed the backbone of the amendment’s support. Many of the strongest pro-amendment counties share isolation and low education levels. What they don’t share is race. Graham County in the Blue Ridge Mountains has one black voter out of 6,600 and voted 89 percent “yes.” Some 450 miles away, Bertie County on the coastal plains is 60 percent black and voted 73 percent “yes.”

Yes, even rural North Carolina had islands of resistance. The amendment failed 2-to-1 on the African-American side of Scotland Neck, a village that has witnessed forty years of civil-rights struggles stretching from a landmark school-desegregation case in the 1970s to the recent stun-gun death of a black bicyclist. The result, says former Mayor James Mills, is an “organized and sophisticated” black electorate. “We were able to communicate that this really had nothing to do with same-sex marriage,” he says. “What this has to do with is hate.” The measure also failed, albeit narrowly, in a black precinct of nearby Warren County, where in the 1980s hundreds were arrested during protests against a PCB landfill that sparked some of the earliest discussions about environmental racism. (Warren County was also home to Soul City, an unsuccessful effort to build an Afrocentric utopian community amidst the tobacco fields.) “This was Ground Zero for not just civil rights but also the environmental-justice movement,” says Stella Adams, a fair-housing advocate who grew up in Warren County and now lives in Durham. “There were Freedom Schools when I was a kid. We learned our history. We learned to fight. We learned to stand up.” Adams, an evangelical Christian whose home-church pastor supported the amendment, says those social-justice lessons helped forge her political beliefs. She voted no.

Clearly, many black voters supported Amendment 1. So did many whites. But for all the attention given to African Americans and gay marriage—particularly since President Obama announced his own personal support last week—North Carolina’s recent election might be the first in state history where race was not a significant factor.