The average public school in this country is more than 40 years old—and showing its age. Roofs leak, walls are ridden with termites and lead paint, and rooms are chronically overcrowded. Parade looks at two communities that rebuilt their schools—and the lessons they can teach all of us. 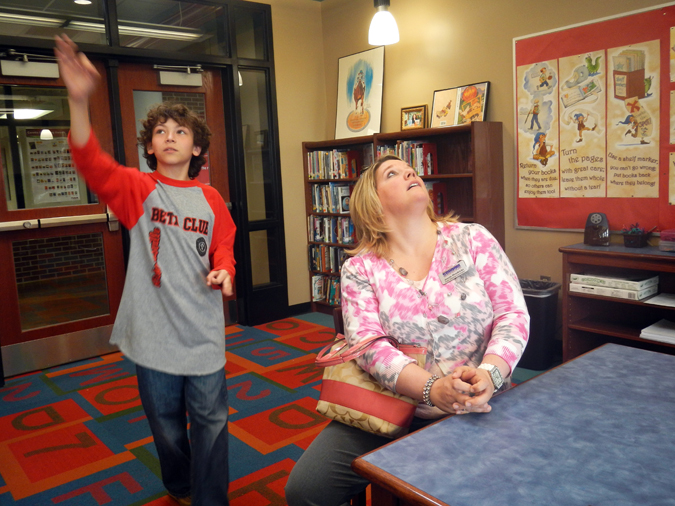 JUST A FEW YEARS AGO, CALIFORNIA’S Santa Ana High School looked like it had long outlived its Art Deco grandeur. The 1935 building was dilapidated, overcrowded, and scarred with graffiti. Roofs leaked. Sewage backed up in pipes. Some buildings had no mechanical ventilation. The wiring was in “various levels of dysfunction,” says assistant superintendent Joe Dixon. “Computers would go down. Lighting would go down. In the few places where we had air-conditioning, that would go down.” In one building, makeshift classroom partitions forced teachers to shout over one another’s lessons. Between the noise and the heat, “it was hard to focus on my work,” says Elvis Carranza, 16, an incoming senior at Santa Ana. “It made me not want to go to school at all.” What’s more, 34 portable buildings (i.e., trailers) had turned parts of the campus into a labyrinth—surrounded by chain-link fencing that, in Dixon’s words, “made it look like if you could get in, you were never going to get out.”

The sad truth is, Santa Ana High was like thousands of other schools across the United States. Talk of fixing American education tends to focus on teacher retention, test scores, and graduation rates—but we often overlook an equally serious problem: crumbling, antiquated facilities that are hostile to learning and depressing to the children and teachers who spend many of their waking hours there.

An estimated 40 percent of the nation’s 100,000 public schools are in “bad to poor condition,” according to Glen Earthman, Ed.D., a professor emeritus of educational administration at Virginia Tech in Blacksburg, Va. Today, the average U.S. public school is over 40 years old. The 21st Century School Fund, a nonprofit based in Washington, D.C., that advocates for healthy and safe learning environments, calculates that it would take $271 billion to bring all of those buildings up to a decent standard. But some communities have taken matters into their own hands to fund the improvements their kids need. Here are two such success stories.

FOR PEOPLE IN SANTA ANA, a city of more than 300,000 located 30 miles south of Los Angeles, the second-rate school facilities were unacceptable. Many residents are immigrants; they often work multiple jobs and share bedrooms in overcrowded apartments. Twenty-eight percent of the city’s children live in poverty. Yet Santa Ana’s parents have ambitious dreams for their kids.

“They want us to do better,” says Carranza, one of five children of a Mexican-born seamstress. His mother, who as a child often walked past the schoolhouse in her village near Santa María del Oro, Jalisco, but never set foot inside, vowed that her own children would have more opportunity. “My mama always told me that the reason she came here,” he says, “was so we could make something of ourselves.”

Raising taxes would not be easy in a city that in 2004 was ranked No. 1 for “urban hardship” by the Rockefeller Institute of Government. But in 2008, Santa Ana residents voted two to one for a $200 million bond issue that would improve the city’s 56 public schools. The resulting property-tax increase—less than $100 per year for a modest house—meant collective belt tightening. “We saw parents picking up recyclables just to make ends meet,” says Maria Cante, the high school’s community and family outreach liaison. But relatively few complained, she says—they knew that better schools would give their children a surer shot at higher education. 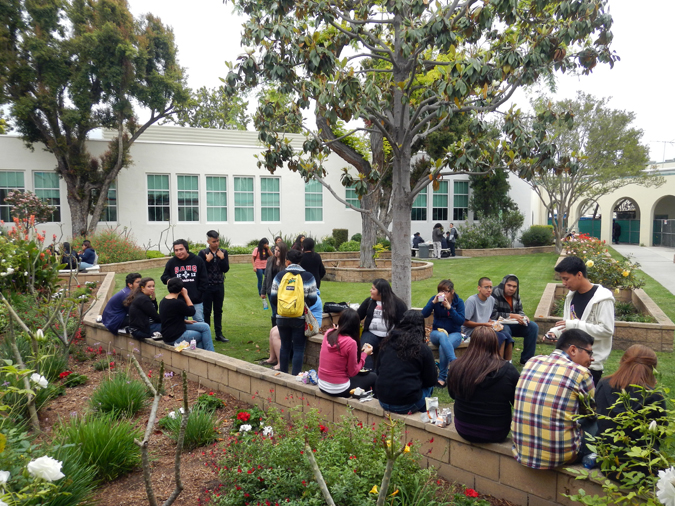 More than $40 million went to overhauling Santa Ana High, one of the district’s neediest schools, an effort that was completed over the past three years. Among many improvements, the auditorium was renovated seat by seat, with high-tech lighting and sound added. (Community groups now use the auditorium and other school facilities year-round.) Workers tore down fences and laid an elegant promenade to help make the ­entrance more inviting. Assistant superintendent Dixon secured an additional $41 million from the state, including an overcrowding-relief grant to help replace the trailers with a two-story classroom building. With more than an acre reclaimed, Santa Ana High once again resembled a true campus.

Since the modernization, vandalism has virtually ceased and attendance has inched up. Eighty-nine percent of seniors had passed the California High School Exit Exam by this past March, compared with 82 percent in 2011. Teachers say students have grown more ­engaged. “If you feel valued, it inspires you to pay more attention and work harder,” Carranza says.

THE PROBLEMS FACING AMERICA’S SCHOOL BUILDINGS are not always visible ones. Poor ventilation causes asthma, headaches, fatigue, and nausea, making it harder to concentrate and boosting absenteeism. Hot and cold classrooms, external noise, and insufficient light all undermine teaching. “We know that when the heat gets up to 78, 80 degrees, the learning curve drops precipitously,” says Earthman. “When a student can’t see the writing surface, when a student can’t hear the teacher, there is a measurable effect.”

Earthman, who has studied the link between infrastructure and student performance since 1993, has found that children attending schools in subpar condition score up to 10 percentile points lower on standardized tests, even after controlling for poverty. Outmoded facilities not only inhibit learning but also drive away good teachers, who would rather work in schools where the thermostats function and the air doesn’t sicken them.

Of course, there are beautifully designed schools that boast every amenity a student could desire, notes Mary Filardo, director of the 21st Century School Fund. But, not surprisingly, they tend to be located in the most affluent ­communities. Elsewhere—in cities, older suburbs, and rural areas—many schools remain “unhealthy, unsafe, depressing places,” she says.

Take a look across the United States and it becomes obvious that when it comes to infrastructure, equality in education remains an unrealized ideal. When it rains in Reading, Pa., “we have classrooms in which there is actually a waterfall coming over the lights,” says Bryan ­Sanguinito, president of the Reading Education Association. At Youth’s Benefit Elementary School in Fallston, Md., some water fountains are off-limits because of lead in the plumbing. In Beloit, Wis., “we’ve shut down certain wings of buildings [because] of air-quality issues,” says superintendent Steve McNeal. Geronimo Road Elementary School, on Oklahoma’s Fort Sill military base, has termite-ridden walls and ceiling tiles that dangle “by threads of glue,” according to the Center for Public Integrity. The Arizona Republic recently revealed that the school fire alarm at ­Arizona’s ­Fredonia High can’t be heard in certain classrooms. And the faulty air­conditioning at J.D. Smith Middle School in North Las Vegas sometimes forces administrators to cool off students by distributing ice pops, reports The Las Vegas Sun.

Much of the disparity between school districts is a function of how educational facilities are funded. It’s typically a local responsibility, and communities have wildly varying tax bases; those with the highest household incomes spend almost three times as much on school construction as the poorest ones.

Struggling districts know they need better buildings. But their leaders say they can’t fix what they can’t afford to, particularly in a stalled economy. According to state and local authorities, the aging schools in New Bedford, Mass.—some more than a century old—have suffered mold infestation and registered alarming carbon dioxide levels. Many have “no facilities for computer labs, for music, for special needs,” says school committee member John Fletcher. But with state funding slashed, the district has laid off most of its custodial staff and put building improvements on hold to avoid massive teacher cuts. “Keeping class size small is the first priority,” Fletcher says.

Until state and federal governments fill the gap, inequalities will persist. Filardo, who thinks about these issues full time in her post at the 21st Century School Fund, knows the obstacles are huge. “But the American people, in their communities, have been willing to tackle major initiatives,” Filardo says. She is encouraged by districts like Santa Ana that have found creative solutions despite their modest means.

Of course, not every old school can be renovated like Santa Ana High. Some need to be rebuilt from scratch. But even new construction can be made more affordable. One way is to go green.

“RIGHT HERE WE CAN SHOW OFF THE SOLAR TUBES,” says Carter Ford as he leads two guests through Richardsville Elementary School in Kentucky’s Warren County. He’s demonstrating a technology that dramatically cuts lighting costs at this rural school. “They’re aluminum cylinders, and on the top there’s a little dome. It collects the sunlight and reflects it a bunch of times. Then, with the glass, it’s able to magnify it and spread it out through the room.” Ford looks up at his visitors and beams with pride. He is lanky, mop-topped—and just 12 years old.

Richardsville Elementary sits across from a cattle pasture nine miles north of Bowling Green. More than three-quarters of its students qualify for free or reduced-price lunch. Until 2010, classes were held in a beloved but obsolete 60-year-old building with dismal l­ighting and no handicapped access. “We had mice in the walls ­eating the wiring,” recalls one teacher, who requested anonymity. “We had mold problems, habitual bronchitis, allergies, sinus infections—teachers and kids.”

Clearly, the old school needed to be replaced. By district policy, that meant building green, which typically doesn’t cost more up front but can yield big returns. Since 2003, Warren County’s school system has focused on conserving energy in construction and operations and calculates that it has saved $7 million and avoided teacher layoffs as a result. That has helped secure bipartisan political support. “When you build high-performance facilities, you save money,” says State Rep. Jim DeCesare, a local Republican (and construction firm executive) who cochairs the Kentucky Green Schools Caucus.

For the new Richardson Elementary, school officials asked Louisville architect Kenny Stanfield to design the nation’s first public school to produce more energy than it consumes. “We had to rethink everything,” says Stanfield—from the placement of classrooms to how bathroom sinks turned on.

The building that resulted uses a quarter of the energy of an average school. Geothermal pumps, which rely on the earth’s steady underground temperatures, supply the heating and cooling. Solar tubes reduce the need for artificial lights. Sensors detect when a room is occupied (and by how many people) and adjust lighting and ventilation accordingly. The kitchen uses steam convection ovens rather than deep-fat fryers, which saves electricity and results in healthier food. And 2,700 rooftop solar panels produce enough power to allow the district to sell excess energy back to the grid.

But what really makes Richardsville Elementary stand out—beyond the sunlit corridors and cutting-edge technology—is how conservation is woven into the fabric of everyday learning. Geothermal temperature gauges are exposed for children to monitor. So is a pipe that collects rainwater for nourishing a garden. There are hallway displays about solar power and recycling, and even first graders can explain how renewable energy works. Warren County is doing more than saving money and keeping kids healthy—it’s producing students who are literate about environmental issues before reaching puberty. That’s a lesson many communities can learn: Building first-class schools is a massive undertaking, but there are creative ways to do it affordably. Once a district makes the commitment, it might discover that better buildings not only help students learn—they help them dream. Last school year, in the evenings, Carter Ford would build Lego cities in his bedroom, with restaurants and airports and curving glass windows. He turned to his own school for ideas—creating a skylight, for example, modeled after the solar tubes in the classrooms. He’d walk through the halls of Richardsville Elementary, gleaning ways to make his own cities more energy-efficient. Then Ford would go home and fine-tune his creation. “It’s amazing,” he says, “how much this building can inspire you.”

Read Caitlin Johnston’s analysis of this article on the Poynter Institute web site.