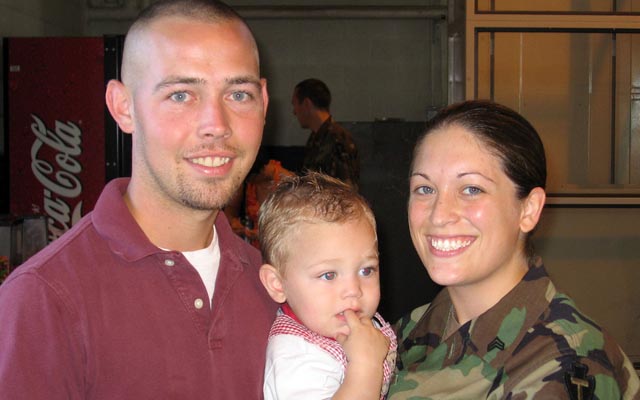 Stacy Keyte with husband Charles and infant Caleb before she deployed in 2005. Photo courtesy of Stacy Keyte.

WHEN STACY KEYTE WAS DEPLOYED Iraq in 2005, her life as a young wife and mother had just begun to take shape. She had a 15-month-old son, Caleb, a happy boy who loved dancing around the living room with his mom; and Keyte and her husband, Charles, both members of the Texas Army National Guard, had started looking for a new home. But the day after closing on a house in Waxahachie, Tex., Charles was called up, too, to train other guardsmen to patrol the U.S.-Mexico border. Putting their family life on hold, the young parents entrusted Caleb to his father’s best friend’s mother as they went off separately to serve their country.

Keyte belonged to a military that was in the process of dismantling the barriers faced by women. Today 357,000 serve in the nation’s armed forces, making up 16 percent of its strength. Over the past decade, more than 280,000 women have been deployed in support of the wars in Iraq and Afghanistan. “We simply could not have accomplished the mission without them,” says Pentagon spokesman Nathan Christensen.

Stationed near Tikrit, Keyte handed out mail, organized awards ceremonies, and prepared hometown news releases. It wasn’t technically combat, but that didn’t keep her safe. Within a few hours of her arrival, Keyte was walking from the bathroom to her living quarters when incoming artillery shook the ground around her. The attack was followed by two weeks of sustained rocket assaults on the base, with few places to take shelter. “I always felt like a sitting duck,” she says. “You just didn’t know where it would land if it came in.”

For any young soldier, these attacks would have been stressful. What complicated Keyte’s experience was that she didn’t always feel respected by the men around her. “We were definitely considered the weaker gender and they had no problems with saying that,” says Keyte, now 32. “There was one noncommissioned officer who would not hesitate to tell me, ‘You should be barefoot, pregnant, and in the kitchen.’ ”

When she returned from Iraq, Keyte realized how much had changed in 16 months. “I came home to boxes and an almost-3-year-old I didn’t know anymore,” she says. Caleb didn’t understand his mother’s disappearance and developed self-destructive tantrums and other behavioral problems. One night they went out for dinner and the host asked if Caleb needed a high chair or a booster seat. Keyte, who had missed many of his early milestones, didn’t know. “I felt so guilty,” she says. “You have so many expectations as a first-time mom, and sometimes life gets in the way.”

Keyte also suffered from the inevitable psychic wounds of battle. “I didn’t want to answer the phone,” she says. “I didn’t want to talk, because that took a lot of emotions.” When a friend tried to hug her, she had such a strong startle response that she slapped away the woman’s arm. “I was trying to make myself a hermit and stay inside my little shell,” she says.

But she couldn’t. There was a child who needed her. Keyte developed migraines, but waited a year to seek treatment at the Department of Veterans Affairs (VA) hospital. “I was still struggling so much with what my son was dealing with,” she says, “that I wasn’t getting help for me.” 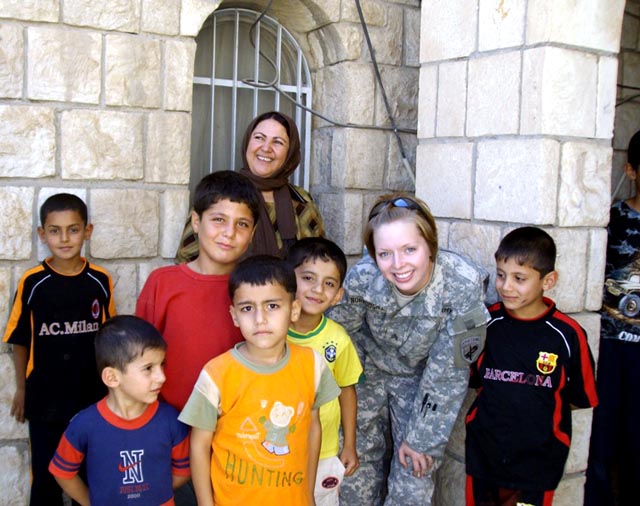 Eryn Sepp at a humanitarian aid drop in Iraq in 2007. Photo courtesy of Eryn Sepp.

WITH THE MILITARY POISED TO LIFT its last sex-based restrictions by 2016, women are now the fastest-growing group of veterans. Even as the number of male veterans decreases, the number of female vets is climbing. It now exceeds 2.2 million. “The nature of warfare places women in hostile battle space in ever-increasing numbers,” says a 2012 VA report—even for those who don’t serve in combat roles. “There is no front line anymore,” says Amanda Mata, 32, who endured sniper fire while working as an army operations sergeant in Iraq.

Female troops face the same problems as their male counterparts, including traumatic brain injuries and post-traumatic stress disorder (PTSD). But they also deal with problems unique to their sex. According to the VA, between October 2011 and September 2012, more than 20 percent of its female patients who’d served during Iraq or Afghanistan operations reported having experienced military sexual trauma—defined as sexual assault or repeated threatening sexual harassment. Women are also more likely to be single parents, the Institute of Medicine found, making it harder to juggle their military and family obligations. And their marriages are more than twice as likely as men’s to end in divorce. Yet women often feel pressure to bear those stresses without complaint. “You don’t want to be the girl in the army that looks weak,” says Mata, “because they already think that you’re weak.”

Just as distressing is the effect of war on female fighters’ lives when they return to civilian life. Women veterans make up the fastest-growing segment of the homeless. They’re diagnosed with mental-health problems more often than male vets. And women vets who have served since 2001 had, at press time, an unemployment rate of 10.3 percent—higher than the rates for both male vets and female non-vets.

Mothers—who make up about 40 percent of active-duty women, according to a 2009 report—can find reentry particularly unsettling. “From the time they get off the bus or plane, instantly they have to go into mommy mode,” says Jil Hinds, director of veteran services for the Coalition to Salute America’s Heroes, a Virginia-based nonprofit. Men might be allowed the time to adjust during their first months home. “With a female, she’s got to hit the ground running,” Hinds says. “There’s no time to sit and grieve.”

Sara Romeo, executive director of Tampa Crossroads, a Florida nonprofit that runs a transitional home for female veterans, says these problems are interconnected. “PTSD and military sexual trauma are [often] the drivers,” she says. “Many of the women come back home to no job market, foreclosed homes, a lack of affordable housing. Grandma has the two kids. Now Mom’s back home and Grandma’s washing her hands of it, and you’re in charge of two children and you can’t find an apartment that you can afford and you’re working a part-time job. At this point, what do you do?” Some women react by drinking, she says, which “continues that down-slide” toward homelessness.

Assistance geared toward female veterans can be hard to come by. Women who seek help through the VA medical system sometimes encounter a male-oriented culture. “The VA has taken major steps,” says Kate O’Gorman, political director for Iraq and Afghanistan Veterans of America. “But if a woman veteran walks in and is immediately asked, ‘Does your husband have an appointment?’—which happens frequently—that starts to erode that sense that the VA is there for me.” The VA is addressing this issue on many fronts, from professional training to automatic screening for military sexual trauma. “We are very much trying to improve the language, practice, and culture of the VA to make it more welcoming,” says Sally Haskell, M.D., the agency’s director of comprehensive women’s health.

THE TWIN TRAUMAS OF WAR AND HARASSMENT can take a deep toll, as army reservist Eryn Sepp learned when she deployed to Iraq in 2007 as a civil-affairs sergeant. Sepp, now 28, had wanted to serve her country ever since the attacks of Sept. 11, 2001. “This was my way of earning my citizenship,” she says.

Three weeks after Sepp’s arrival in the northern city of Erbil, a truck bomb exploded at the Kurdish Interior Ministry, killing at least 15 people. “I had never seen or experienced death in my whole life,” she says. “All of a sudden, we were digging through rubble and pulling bodies out.” Eight months later, Sepp was part of a convoy in which a Humvee overturned at 55 miles per hour, killing her best friend, 20-year-old Michael Sturdivant.

Sepp was fortunate to win the respect of most of the men on her team. But she still had to contend with catcalls from other soldiers, along with “weeks of inappropriate comments” from a superior. “Oddly enough, the thing that got me wasn’t the sexual comments,” says Sepp, a skilled markswoman. “What got me was people thinking that my capabilities—at shooting, or driving, or being a soldier—were any less just because I’m a woman.”

Returning home to Southern California with $24,000 in savings, Sepp eventually found a job at a gun range and applied to a junior college. But she was haunted by nightmares, and unexpected door knocks set her heart pounding. “Sometimes it was all I could do to get up and get dressed,” she says. For four months she couldn’t keep food down, even when she had an appetite, and her weight dropped from 150 to 115 pounds. “I ended up becoming this sallow skeleton of myself,” she says. Recovery would take every ounce of resilience she possessed.

THERE’S NO FOOLPROOF FORMULA  for a successful homecoming from the battlefield. For Keyte, healing came from assisting other vets. In 2011 she became an outreach coordinator for Grace After Fire, a Texas-based nonprofit that runs peer support groups for women veterans and helps them find the resources they need. “There’s nothing more rewarding than to watch these women come out of their shells,” she says.

Sepp’s salve came from tapping into the skills she developed in the army—“my moxie, my ability to work long hours”—along with “that unbridled sense of self-confidence and stick-to-itiveness” that she gained, in part, from making sergeant at age 21. From the military’s emphasis on teamwork, Sepp also learned to ask for help when she needed it. With the support of her mother and veteran stepfather, Gail and Jim McFarland, and from the Pentagon-funded counseling program Military OneSource, Sepp found her way back. She made straight A’s at the junior college, transferred to UCLA, and graduated in 2012 with a degree in political science. She worked through her pain by writing songs and playing guitar. After school, she married Marine First Lt. Yuri Sepp and started a rewarding job at a Washington, D.C., think tank.

Sepp knows that not every veteran is lucky enough to have such a supportive family and educational and job opportunities. She feels extraordinarily grateful. “It’s nice to be in a place in my life where finally it’s not, ‘What’s the next thing I have to protect myself from?’ ” she says. “It’s weird, because after Iraq I thought I’d never be happy again. I didn’t know that this is what ‘absolutely happy’ looks like.”