The Moral Monday movement entered its second year with a bang on Saturday. But can it channel that upbeat energy to reverse a conservative tide?

Originally published in The American Prospect.
All photos © 2014 by Jenny Warburg. 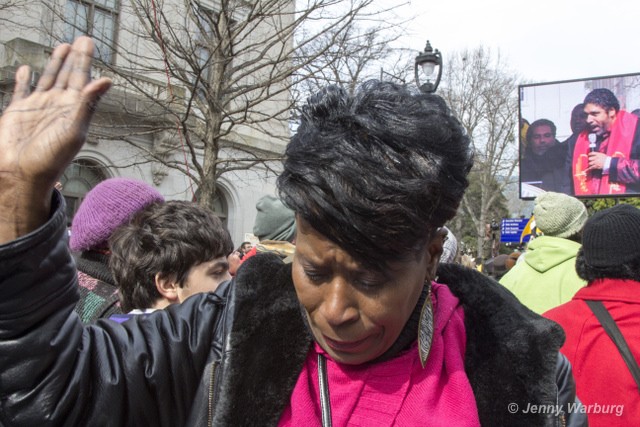 GEOFFREY ZEGER DIDN’T ATTEND last year’s Moral Mondays, the series of civil-disobedience events at which more than 900 people were arrested at the North Carolina legislature. The weekday occupations, coordinated by the North Carolina NAACP to protest the state’s sharp-right policy turn, conflicted with Zeger’s work schedule. But when he learned that tens of thousands of demonstrators planned to descend on Raleigh last weekend, the private-practice social worker from Durham couldn’t stay away.

“Every day I work with people whose unemployment benefits have been cut, and who are trying to get food stamps,” he told me at Saturday’s Moral March on Raleigh. “And a mother who’s working three and four jobs, and who has her children being watched by their grandparents. And they’re struggling. Ten hours a day, I’m working with people who are affected by a GOP legislature.” Zeger’s clients battle anxiety and depression, he says, as their family budgets grow ever more precarious. Yet Republican governor Pat McCrory and his legislative allies have cut jobless benefits and rejected a federally funded Medicaid expansion. “How do these policies help North Carolinians get better jobs and contribute to the tax base?” Zeger said. “They don’t. It’s a negative feedback loop.” 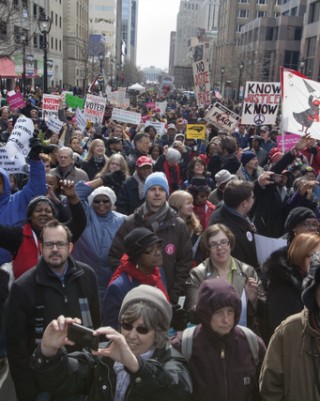 So on a cloudy morning, Zeger joined a contingent of social workers that was gathering on the downtown campus of Shaw University. They were surrounded by hundreds of other human clusters, bundled against the cold but enlivened by their sheer numbers. Women’s health advocates sported pink toboggans. Fast-food workers carried signs demanding a higher minimum wage. Student activists, dressed as Dr. Seuss characters, rehearsed a piece of political theater. Farmworker allies carried a colorful magical-realist banner. There were sorority sisters, military veterans, and a dog wearing a sign that said, “Huskies for Choice.”

As the multiracial crowd assembled for a march to the old Capitol building, the Rev. William Barber II, the NAACP’s state president, stood on a podium with some of North Carolina’s civil-rights elders and called for a “pro-justice” policy agenda: equitable and well-funded education; universal health care; better environmental protection; strengthened voting rights; a concerted effort to reduce poverty; fairness for minorities and the poor in criminal sentencing; and equality for women, immigrants, and LGBT North Carolinians.

When he finished, a series of clergy members offered benedictions, each ending with the same crowd chant: “Lift up the light; hear our hearts, oh, God; and let it be so.” And with that, the faith leaders kicked off a march that—depending on whose estimate you believe—might have rivaled or even surpassed the 25,000 activists who traveled part of the route from Selma to Montgomery in 1965 to demand equal voting rights for African Americans in what was then a record-breaking protest for the South.

The Moral March on Raleigh was the largest uprising to date against the dramatic reversal in North Carolina’s tradition of moderate governance. For most of the time since 1960—when Democrat Terry Sanford, a former Army paratrooper with a pro-education agenda, defeated segregationist attorney I. Beverly Lake to become governor—policymakers from both parties have agreed that public-school and social-welfare spending, along with coolheaded race relations, were essential to maintaining a stable New South business environment. 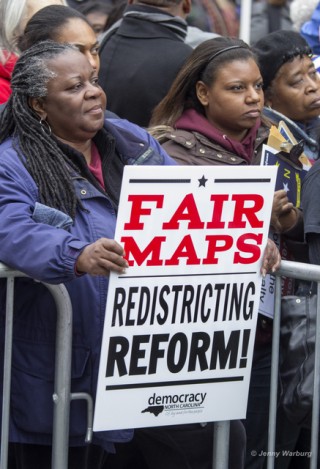 But the 2010 election of Republican majorities in both legislative chambers, followed by McCrory’s election two years later, set the stage for a radical overhaul in state policy. (Before this, the GOP had not controlled North Carolina’s government since 1870.) In addition to cutting social spending, the new majority shifted the tax burden away from the most affluent; made it easier to carry a concealed weapon but harder to obtain an abortion; and reduced ballot access with new limits on registration and early voting. It repealed a law giving death-row inmates the opportunity to challenge their sentences on the basis of racial bias. And it made deep cuts in education spending, to the dismay of teachers and administrators.

“I want to continue to do the job I love, and it’s looking less and less likely that this is going to be a sustainable profession for me,” Adriana Pardo, a fourth-grade teacher at Raleigh’s Joyner Elementary Magnet School, told me at the march. Five years into her career, Pardo said, “I haven’t had a raise, and there’s nothing that says eventually I’ll get any more money. If things don’t change, we’re going to lose some very valuable teachers.”

WITH THE ENTIRE LEGISLATURE UP for re-election in November, the state NAACP and its allies call 2014 a critical organizing year. They’re hoping to build on 2013’s Moral Mondays, which attracted national attention partly because of the weekly arrests of religious leaders, physicians, educators, and elected officials who peacefully protested in a public building.

Saturday’s event was the opening volley of what Barber called a renewed challenge to the “extremism” of North Carolina’s current leadership. This will almost surely include more civil disobedience, and more arrests, when the legislature reconvenes in May. “This Moral March inaugurates a fresh year of grassroots empowerment, voter education, litigation, and non-violent direct action,” he said during the afternoon rally. “We will defend the ballot. We will defend the Constitution. We will encourage voter turnout regardless of party. And we will sue to restore voting rights … ” The rest of that sentence was drowned out by cheers. “We are calling on all people to get on board: There’s a train coming and it’s heading toward justice.” 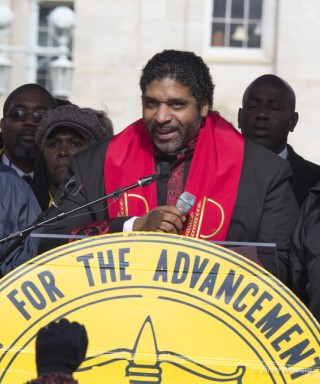 Progressives will be watching this train with numerous questions. Can the energy from Saturday’s turnout be channeled into something more enduring? Will this multi-pronged strategy make a tangible impact on policy? Will it translate into electoral gains, particularly after Republican lawmakers have redrawn their own district maps? Will it succeed in other parts of the South? (Similar efforts are brewing in South Carolina and Georgia.) And will a movement steeped in the language of the Civil Rights Era, including the deep tropes of African-American Protestant churches, attract and sustain new activists, particularly young adults who didn’t live through that history and have been underrepresented in the Moral Monday arrests?

The answers will unfold slowly over the coming year. For many, the upbeat energy of the Moral March offered inspiration to persevere. The large buildings that line downtown Raleigh’s Fayetteville Street cast a shadow that, along with the overcast weather, kept demonstrators shivering for much of the rally. But at the very end—during the last verse of “We Shall Overcome”—the clouds parted for the first time all day. “Give a mighty shout!” Barber declared. “Give a mighty shout! The sun has come out.”