How two friends came to rest side by side at Arlington National Cemetery. 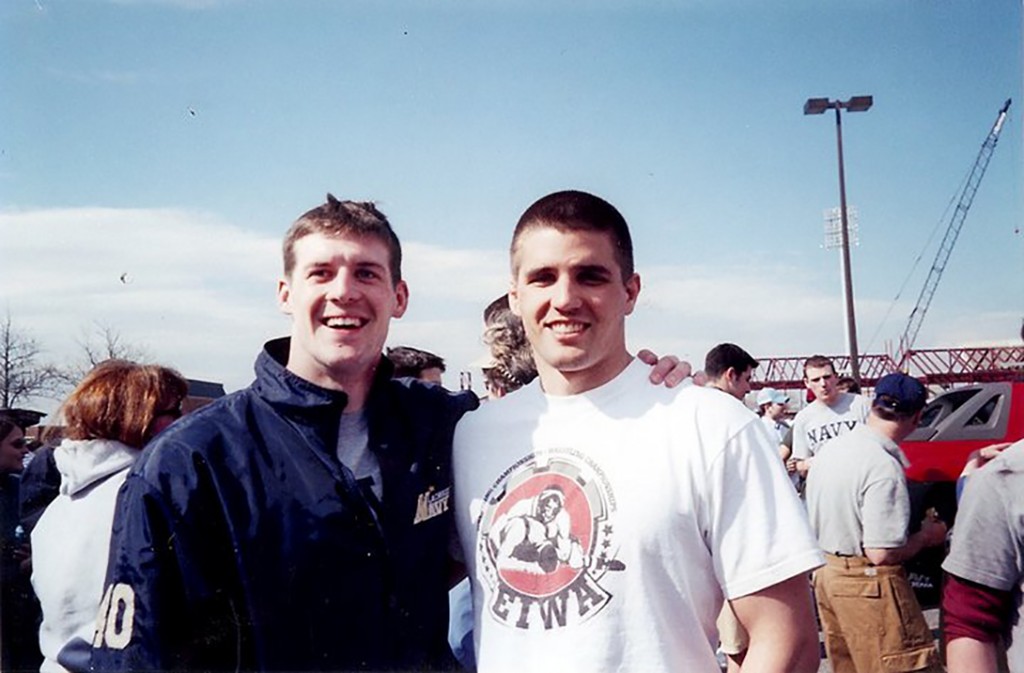 ON MEMORIAL DAY 2004, TRAVIS MANION, a newly commissioned Marine officer, went to cheer on his roommate and best friend, Brendan Looney, at the national lacrosse championship in Baltimore. It was an emotional afternoon. Three days earlier, both men had graduated from the United States Naval Academy, and now they expected to be deployed to Iraq or Afghanistan. “You will face many enormous challenges,” Air Force general Richard Myers, then chairman of the Joint Chiefs of Staff, told their class. “You will go into harm’s way. The sacrifice, [which] you have learned by now, is part of the job description.”

Then, as today, we were a nation at war. That made Navy the sentimental favorite in the final against Syracuse University. Travis sat with his classmates. His parents sat with Brendan’s parents. Rain pounded the field as the lead flipped back and forth, with Navy’s fans chanting “U-S-A.” The teams were tied with five minutes to go. Then Syracuse pulled ahead and won, 14–13.

While most of Navy’s players hit the bars of nearby Annapolis, the two close friends—along with Brendan’s brother Steve and future wife Amy—retreated to a house that Travis’s parents owned near campus. Brendan and Travis weren’t the type of guys who talked openly about their feelings. But Brendan privately confessed how gloomy he felt about the loss, and Travis knew his buddy needed a boost. So he put on a cowboy hat and a camouflage poncho and cranked up a Michael Jackson tune. Looking ridiculous, he and Brendan’s brother began break-dancing in the kitchen.

“Brendan and I were laughing,” recalls Amy Looney. “Travis was putting on his extra charm. He was trying to do what he could to cheer up his best friend.” Everyone’s spirits rose until they were ready to join the rest of the team for a night of carousing in town.

Taking over the back of a downtown bar, they celebrated having made it to the national championship for the first time in decades—and, for the graduates among them, surviving the rigors of the Naval Academy. Though it was unspoken, they knew that much of their class would soon be going off to war. That night in Annapolis, remembers Amy, “was the last hurrah.” 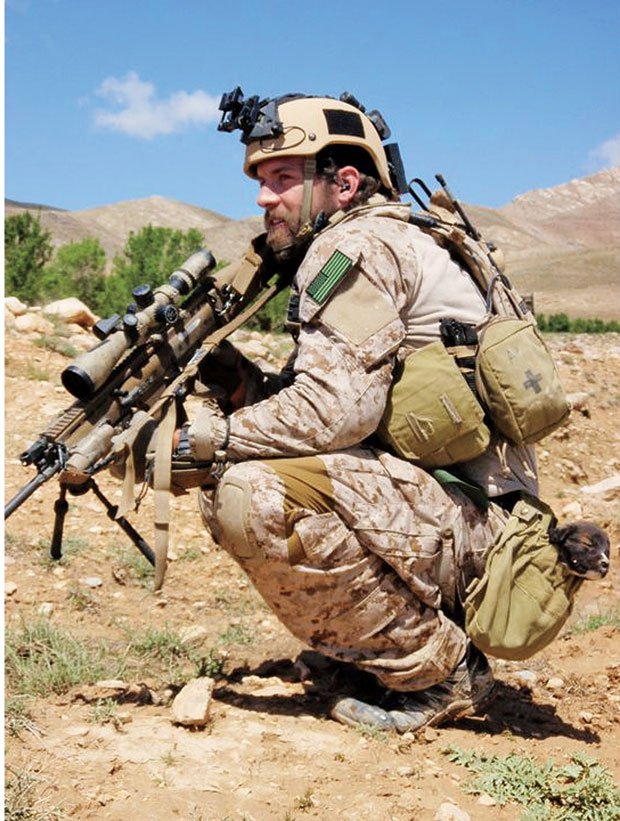 THE FRIENDSHIP THAT FORMED at the Naval Academy between Brendan and Travis surprised nobody. Both were accomplished athletes: Travis wrestled and Brendan played football before switching to lacrosse. Both had wicked comic sides. And both loved their country and believed in sacrifice.

Brendan came from a large, close-knit Catholic family from Owings, Md. Of the six siblings, all three brothers attended the Naval Academy and even played on the lacrosse team at the same time. The oldest, Brendan was a hulk: 200 muscular pounds and “chiseled like a Greek god,” says Ben Mathews, who played football with him there. And driven, always, to excel. “He did not spend a whole lot of time talking about things. He spent most of [his] time trying to outplay and outmuscle everybody. Brendan never, ever wanted to look like he was outperformed.”

Travis grew up Catholic, too. His father, Tom Manion, a retired colonel, spent 30 years in the Marine Corps, and Travis and his older sister Ryan were born at Camp Lejeune, N.C. The family moved around before settling in Doylestown, Pa. Travis was a “warrior-poet,” says Mathews. He kept on his desk a box of note cards on which he copied inspirational lines. “There were quotes from books, quotes from movies, about teamwork and leadership.” When Mathews asked about the cards, Manion said, “I take a little bit of everything that I read and try to incorporate that in my life.” 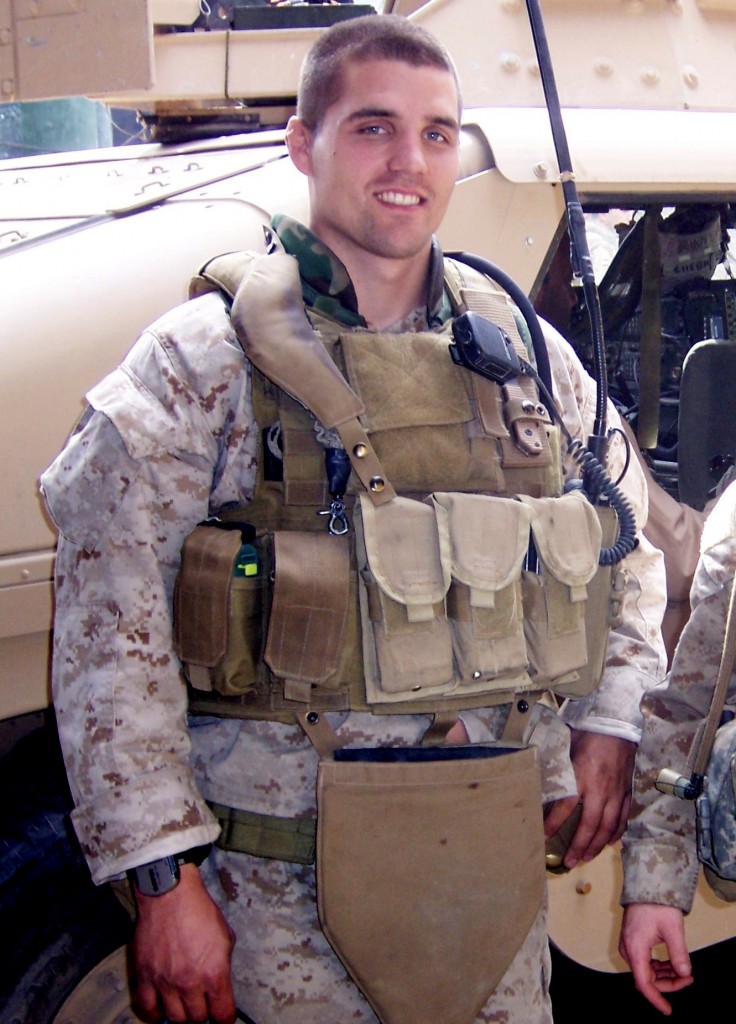 The duo didn’t gush about their friendship. “Alpha males don’t talk about how close they are,” says classmate Brian Stann. But they gave nonverbal cues—like the way they’d break into simultaneous laughter even if no one had said anything funny.

Once Travis and Brendan became friends, they did almost everything together. Naval Academy roommates live in such cramped quarters, often they want to be apart during free time. Not Travis and Brendan. They spent weekends together at the Manions’ Annapolis house. Travis visited the Looneys for Thanksgiving, then described to his parents the happy cacophony of a large family dinner. Both sets of parents celebrated Brendan’s lacrosse victories at postgame tailgate parties. Travis even joined Brendan on some of his dates—as when Brendan took Amy to see the movie Mean Girls. Amy enjoyed listening to two grown men laugh through a chick flick: “They weren’t too cool to watch a girls’ movie,” she says.

They often expressed their bond through “japing,” or teasing. “Every time I walked into that room, some prank was going on,” Mathews says. Travis would good-naturedly taunt Brendan, for example, when his younger brothers outshone him on the lacrosse field. “Both were textbook ‘guy’s guys’: the ribbing, the constant making fun of each other,” Mathews says. “That’s the way they shared affection.”

And always they competed, whether in sports or playing video games. Just before Travis left for Marine officer training in Quantico, Va., a summer-afternoon bike ride turned into a frenzied race down a mountain trail that left another friend, a star lacrosse player, behind. (Brendan declared victory; Travis accused him of cheating.) Underneath the boyish competition, their loved ones saw something deeper: Each was tacitly encouraging the other to improve. “They pushed each other,” says Travis’s sister, Ryan Manion Borek. “When you look back, you see the development of them becoming men.” 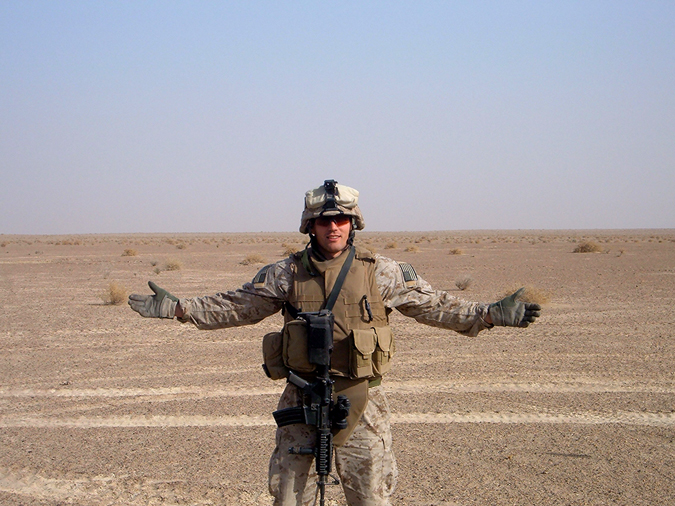 THE FIRST TO DEPLOY WAS TRAVIS. His first tour, which began in 2005 in Iraq, kept him mostly on the base. “He would get so frustrated,” says Stann. “He had all these friends from the Naval Academy taking casualties and getting wounded. He wanted to be a war fighter.”

Travis got his wish during his second tour, when he joined a team that helped train Iraqi fighters. Assigned to the insurgent hotbed of Fallujah, he crawled through rubble after a bombing to free two trapped Iraqi soldiers—and then, 10 days later, raced through chlorine gas to the roof of a crumbling barracks to relieve his fellow Marines after a chemical attack. “Travis was always willing to go to where the fire was most intense,” says Eric Greitens, who served with him.

In April 2007, while patrolling Fallujah’s Andaloos district, Travis’s U.S. team found themselves separated from their Iraqi allies and surrounded by the enemy. After two Marines were shot, Travis moved into harm’s way to draw fire away from the injured as they received treatment. As he loaded his grenade launcher, a sniper’s bullet pierced his side. His fellow Marines administered first aid but couldn’t save his life. He was 26.

Brendan was beginning Navy SEAL training in San Diego when he learned of Travis’s death. The task of breaking the news fell to classmate and fellow SEAL Rob Sarver. “Brendan walked away, interlaced his fingers in back of his head, and took a deep breath,” Sarver says. “He was overwhelmed with grief. When he got on my phone with his family and Amy, he was having trouble getting words out.”

Unable to attend Travis’s funeral, Brendan threw himself harder into his military preparation. “It suddenly became very defined for Brendan,” says Sarver. “It wasn’t just a four-mile run anymore, or a two-mile swim, or any of the physical or academic challenges that we had to go through during SEAL training. Everything was, ‘I’m doing this because I lost Travis.’ ” 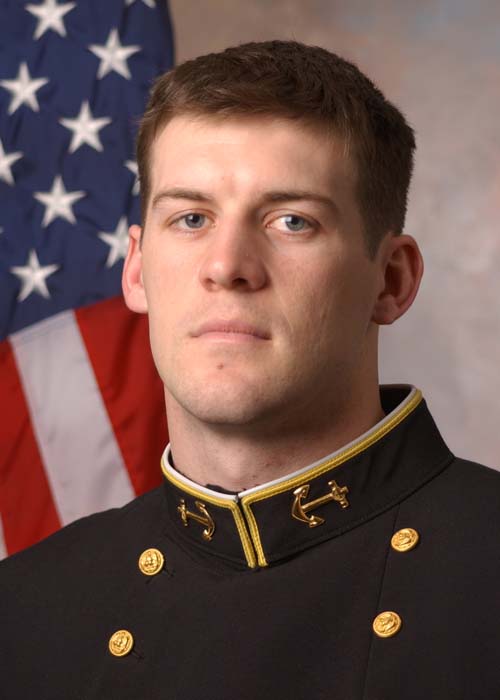 Partway through his training, Amy visited Brendan in California. On their second night together, he knelt on the beach and proposed. “Life is short,” he said. “Just look at what happened to Trav. I don’t want us to have any regrets.” When they wed in July 2008, during a portrait session with his groomsmen, Brendan asked Tom Manion to stand in for his son.

Six months after Manion’s death, Brendan flew to Washington, D.C., to run the Marine Corps Marathon in his friend’s honor. Speaking at a banquet the night before, he called Travis “another brother to me” and told a story about a trip they took to Texas. His lip quivered and his voice cracked. By the end, he stopped trying to hold back the tears. “He was a great friend,” Brendan said. “I miss him.”

IN JUNE 2008, BRENDAN FINISHED SEAL TRAINING. Two days after his wedding he was deployed to Iraq, then Afghanistan. He wore a bracelet bearing Travis’s name and tried to live up to his legacy. “I can’t think of anyone you’d want more next to you in a fight,” Sarver says.

In Afghanistan, Brendan was assigned to the Taliban stronghold of Zabul Province, where he went on 58 combat missions. His Bronze Star Medal citation describes four occasions when he faced “a blistering hail of rocket-propelled grenades and automatic weapons fire” and notes that Brendan’s leadership helped weaken the local insurgency.

In September 2010, Brendan had one more mission: observing the village of Ayatalah from above as an operation was carried out. “Can’t wait to get home,” he wrote Amy. But en route to Ayatalah, his helicopter crashed, killing him and eight other service members.

As the reality of her husband’s death slowly sunk in, Amy was plagued by an insistent thought: Brendan needed to be reunited with Travis at Arlington National Cemetery. “I didn’t want Brendan to be alone,” she says.

Travis’s family had buried him near their Pennsylvania home. But he had once told his sister that he wanted to be buried in Arlington if he died in combat. “Amy is right,” Travis’s mother, Janet, told her husband. “We can bring Brendan and Travis back together.” 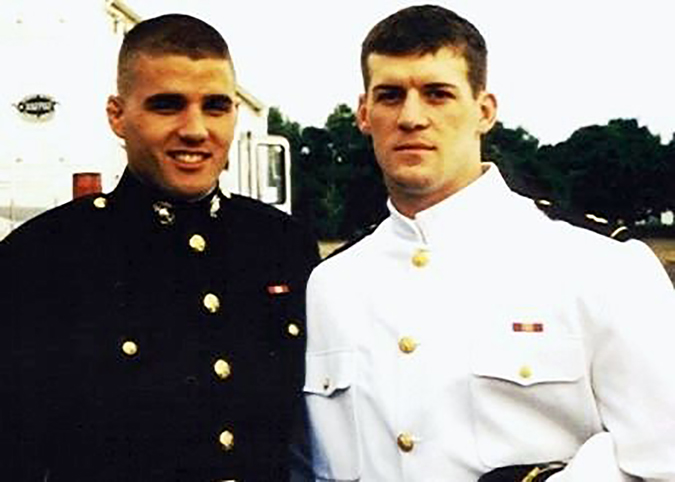 Travis Manion and Brendan Looney at their Naval Academy graduation.

And they did. On Sept. 27, three days before Brendan was laid to rest, Travis’s body was disinterred and moved 150 miles to Arlington National Cemetery. The following May, President Obama singled them out in his Memorial Day address. “The friendship between 1st Lt. Travis Manion and Lt. Brendan Looney reflects the meaning of Memorial Day,” he said during a visit to their graves. “Brotherhood. Sacrifice. Love of country.”

Today their relationship continues through their families. Amy works for the Travis Manion Foundation, which is run by Travis’s sister Ryan Manion Borek and helps returning vets acclimate to life back home through mentorship programs. The two women have become close. Travis’s mother died of lung cancer in 2012, but his father, Tom, sees Brendan’s parents several times a year. This month, a book coauthored by Tom about Travis and Brendan’s friendship was published. It is appropriately titled Brothers Forever.

Even today, friends and family have trouble grasping the fact that the two are gone. Still, they take comfort in knowing they will rest forever side by side. “I’m grateful,” says their classmate Mathews, “that these two guys, who challenged themselves and each other—now they can jape each other for eternity.”