As the North Carolina state legislature reopens on May 14 with no ideological reversal in sight, the Monday takeovers of the rotunda will resume. So, likely, will the arrests. 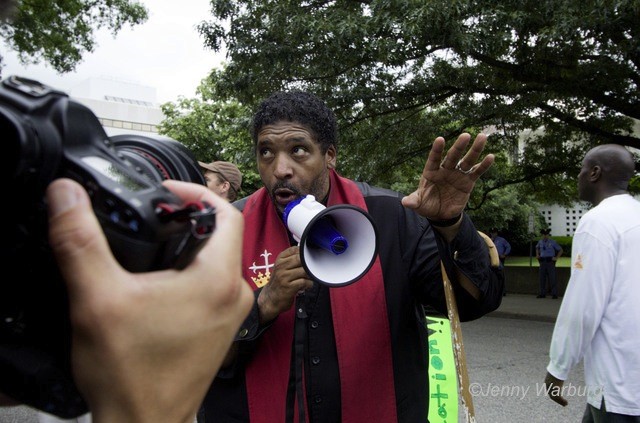 The Rev. William J. Barber II, president of the North Carolina conference of the NAACP, leads a Moral Monday protest in Raleigh, N.C., in 2013. Photo © 2013 by Jenny Warburg.

ON WEDNESDAY AFTERNOON, THE NORTH CAROLINA legislature will open its 2014 session. It will be hard for the Republican majority to top last year’s performance, which shattered the final vestiges of the state’s 50-year reputation for moderate governance. With the help of newly elected GOP Gov. Pat McCrory, lawmakers in 2013 slashed both public education and unemployment benefits. They rejected an expansion of Medicaid, paid for almost entirely by the federal government, that would have covered at least 300,000 low-income North Carolinians. They cut corporate taxes and eliminated the earned-income credit for low-wage workers. And they rewrote the state’s election laws in a way that will make registration and voting harder, particularly for African-American, blue-collar, and younger voters.

They might have done this without attracting national attention if not for the emergence of a political counterweight: a coalition of clergy, health professionals, educators, and other activists who took over the marble rotunda of the legislative building in Raleigh on twelve Mondays during the session—holding hands, praying, singing “We Shall Not Be Moved”—to protest what they viewed as an assault on the state’s most vulnerable residents.

Many refused to leave until police escorted them away in plastic handcuffs. The Moral Monday demonstrations, spearheaded by the state NAACP and supported by dozens of other groups, produced 945 arrests and garnered international headlines. Activists in states from Florida to New York have borrowed the North Carolina model to organize similar protests.

Now, with legislators returning—and all 170 seats up for grabs in November—Moral Monday organizers are getting ready for a more comprehensive and strategic Round 2.

It’s hard to predict exactly what new laws the 2014 session will produce. North Carolina makes most of its big policy changes during odd-numbered years, and House Speaker Thom Tillis, who needs moderate support in his race against Democratic U.S. Senator Kay Hagan, may try to rein in GOP radicals.

Still, Republicans have promised to press on—starting with the repeal of the “Common Core,” a set of national academic standards that teachers generally embrace, and replacing it with benchmarks drawn up by state political appointees. Critics worry about entrusting learning standards to an administration that, for example, has failed to embrace modern climate science. GOP lawmakers might also make another run at private-school voucher legislation; their 2013 law is tangled up in court.

With no ideological reversal in sight, the Monday takeovers of the rotunda will resume next week. So, likely, will the arrests.

“We want to shine a bright light on the cruel and crazy stuff that this legislature has been doing and will no doubt continue to do,” says Duke University historian Tim Tyson, who was arrested during one of last year’s protests. “You don’t have to tell people this stuff is bad; all you need to do is tell them what is happening.”

As in 2013, the Moral Mondays will have a uniquely Southern tone, evoking the civil-rights movement of the 1960s. While the Rev. William Barber II, president of the state NAACP, has stressed the ecumenism of the protests—embracing Catholics, Jews, Muslims, and non-believers—they will nonetheless be steeped in the language and cadences of African-American Protestantism. This reflects a deliberate calculation to wrest the religious high ground away from conservatives.

“We’re taking the Bible back from the extremists,” says the Rev. Curtis Gatewood, a state NAACP community organizer, who quotes from the Old Testament, Isaiah 1:10: “Woe to those who make unjust laws… to deprive the poor of their rights.”

Leaders stress that the Monday demonstrations will be the most visible edge of a larger campaign that also includes litigation and community organizing. The state NAACP has filed a lawsuit to overturn the restrictive new voter election law, contending that it “will cause the denial, dilution, and abridgement of African-Americans’ fundamental right to vote,” according to the complaint. The case is scheduled for a preliminary-injunction hearing in July, followed by a full trial in 2015.

The NAACP also plans to train dozens of young activists and place them in counties across North Carolina for a “Moral Freedom Summer” focused on voter registration and education. (This year is the 50th anniversary of Mississippi Freedom Summer.) NAACP officials say this will be the first step in creating a more permanent organizing presence throughout the state.

A striking trait of the North Carolina movement, and a key to its potential success, is its deliberate ideological and geographic breadth. The NAACP has tightened its alliances with environmental, women’s, LGBT, labor, immigrant, and religious organizations, some of which have historically been at odds over social issues. Barber himself has modeled this line-crossing approach.

He took a strong stand in 2012 against North Carolina’s constitutional ban on same-sex marriages and civil unions, and more recently showed up at Duke Energy’s May 1 shareholder meeting to protest a devastating coal-ash spill into the Dan River. Likewise, the NAACP has pushed into traditionally conservative regions of North Carolina—including Mitchell County in the Appalachian Mountains, where an overwhelmingly white crowd packed an Episcopal church last fall to listen to Barber’s message and interrupt with the occasional “amen.”

“It is unbelievable,” Gatewood says of these allies in places like Mitchell County. “They’re exemplifying enthusiasm that’s moving faster than some of our traditional NAACP leaders. When you’re coming against teachers, [people in conservative strongholds] have got relatives who are teachers. When you’re coming against people who are unemployed, some of them lost jobs at no fault of their own.”

Gatewood says he doesn’t expect this ground-level outpouring to change lawmakers’ minds. “We are not discouraged if we do not receive an answer right away,” he says. “But we do expect to see [a change in] the way people view the governor’s performance or the legislative decisions—the way people are paying attention and getting involved.”