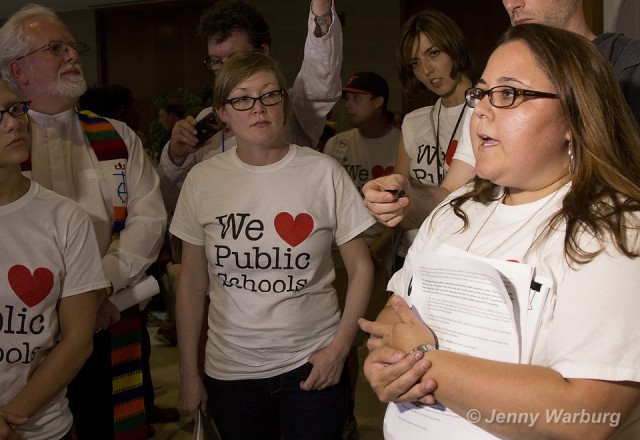 Kristin Beller, an elementary-school teacher from Raleigh, N.C., addresses her colleagues during this week’s Moral Monday teach-in. Beller must work a second job to pay off her student-loan debt. Photo © 2014 by Jenny Warburg.

BRYAN PROFFIT KNOCKED ON the door of North Carolina Senate President Pro Tempore Phil Berger’s office. It was locked and no one responded, which seemed odd considering that the Senate was about to open its Monday night session. “Maybe nobody’s home,” said the lanky 35-year-old high-school history teacher from Durham.

He turned to Joy Boothe, a soft-spoken former chamber of commerce board president from the mountain town of Burnsville. “Do you want to try?” he asked her. “Maybe I didn’t get it right.”

That call went unanswered too. So Boothe, Proffitt, and 13 others—educators, students, parents, a minister, and recent university graduates—settled into the hallway in front of Berger’s second-floor office for what would turn out to be a breakthrough night.

North Carolina’s 2014 legislative session, which began May 14, is now in full swing. So is the Moral Monday movement, the NAACP-led, faith-based opposition to the state’s recent dismantling of voting rights, civil liberties, and the social safety net. The movement, now in its second year, has built a solid foundation of support from a wide array of churches and issue-based organizations, including labor, immigrant, and women’s groups. This spring, as legislators have tried to limit protests and sometimes even avoid the building on Mondays, organizers have grown adept at surprising lawmakers with unannounced, targeted, and sometimes colorful actions.

When a legislative committee passed new restrictions on assemblies within the building last month, protesters covered their mouths with tape and staged a silent vigil. The following week, 15 people, many of them fast-food workers and clergy, occupied House Speaker (and U.S. Senate candidate) Thom Tillis’ office and demanded to speak with him about the state’s cuts to unemployment benefits and its refusal to accept federal Medicaid expansion money. When Tillis failed to appear, they defied police orders to leave until 14 were arrested at 1:45 a.m. The fifteenth left early to meet her parenting reponsibilities.

This week’s action focused on the grievance that most fully unites the Moral Monday coalition: Republican efforts to cut resources for public education, both to save money and to “reform” the system. This is a reversal of a 50-year bipartisan consensus, originally championed by Democratic Gov. Terry Sanford in the 1960s, that viewed public-school investments as critical to North Carolina’s economic development.

In 2013, GOP budgeting eliminated thousands of instructional positions while keeping in effect a longstanding freeze on teacher salaries. Legislators also passed a new tax-funded voucher program for private schools. This year’s Senate budget, passed by that chamber May 31, offers salary increases averaging 11 percent to teachers, but with two caveats. First, individual teachers would have to waive the job security and academic-freedom protections that come with tenure. Second, freeing up the money would mean deep cuts in other school services and personnel.

“The message is: You can have a big pay raise as long as you throw your teacher assistants under the bus, and the school nurses under the bus,” says Page McCullough, outreach director for Public Schools First NC, a non-profit founded last year in response to what it viewed as efforts to dismantle public education. “And the bus might not run. And you don’t have any textbooks. P.S., you’re going to have to give up your tenure.”

The House’s budget, which is currently under debate, offers smaller raises without the threat to tenure or teacher assistants.

On the lawn behind the legislative building, more than 1,000 people gathered for an hour-long public rally that featured clergy, educators, and students as speakers. More quietly, the core group of 15, including Proffitt and Boothe, were discreetly huddling on a nearby terrace and planning a peaceful ambush on one of their political adversaries.

PHIL BERGER, A FOUR-TERM senator from the former textile-manufacturing town of Eden, rose to leadership when the Republican Party took over both chambers of the legislature in 2011. He’s been an architect and defender of his party’s education policies, including this year’s move to cut up to 7,400 teacher assistants (TAs). Berger cites studies that, in his view, question the effectiveness of TAs in the classroom. The author of one of those studies, University of London researcher Rob Webster, has disavowed Berger’s interpretation. “Getting rid of TAs is actually going to cause schools far more problems than it will solve,” Webster told Raleigh’s News & Observer last week.

Meeting with activists before Monday’s protest, the movement’s founder took aim at Berger’s plans to cut TAs. “There’s a Scripture in the Bible that says, ‘Learn to do right,’” said the Rev. William Barber II, president of the state NAACP. “Mr. Berger cites research about teacher assistants. He wasn’t learning. He was just trying to justify a presupposition. In theology, we call that eisegesis: when you already know what you want to say and you just try to find a Scripture that agrees with you. You make a lot of mistakes like that.”

The teachers who gathered on Monday had stories to tell about how insufficient funding impacts them directly. Kristin Beller, a fourth-grade teacher in Raleigh, earned her master’s degree just as the pay freeze began and has had to work a second job at a community center to pay back her student loans. Her brother David Beller, who teaches high-school social studies nearby, has fewer textbooks than he does students, and the ones he does have are missing covers or bound with duct tape. “We’re not getting new books any time soon,” he said. “And we have a big freshman class coming soon. So I want to ask Phil Berger, where are we getting new textbooks?”

With no sign of the Senate leader, the protesters staged a “teach-in” outside his office door, miked and audible to those who had wandered in from the rally and had gathered in an atrium one floor below. One by one, they took discussing a range of educational issues: the value of TAs and school nurses; the disparate ways that white and minority students get disciplined; the chilling effect of tuition increases at North Carolina’s public universities. Several discussed the importance of tenure, not just for teachers who speak out politically but also for lesbian and gay teachers who would otherwise have no protection from discrimination. Occasionally they led chants that echoed through both the second floor and the atrium.

At 7:45 p.m., 90 minutes into the teach-in, a police officer started making rounds. “We’re clearing the building,” he told the protesters, warning that anyone who remained would face arrest. Those who had come inside from the rally left, but the 15 core activists huddled against Berger’s door and prepared for a night of civil disobedience. Instead of making arrests, though, the legislature’s police chief, Jeff Weaver, came back with an offer: “If you were to meet with Pro Tem Berger, would you be willing to leave after that meeting?”

“We’d like to have a meeting,” said Proffitt, the Durham teacher. “And then we’d like to hear his responses to this, and then have an opportunity to check in with each other and decide what’s next from there.”

“Let me make that presentation to him,” Weaver said.

A few minutes later, Berger agreed to those terms.

THE DISCUSSION BETWEEN THE SENATE LEADER and the activists, tense but civil, was the first of its kind since the Moral Monday movement began in 2013. Sitting in a hastily assembled circle of sofas in the hallway, with the media hovering behind them, the educators and their allies listened as Berger defended the proposed school cuts as necessary to increase their salaries. “I, quite frankly, am sick and tired of hearing about North Carolina being 47th in public-school teacher pay,” he said. “We made some hard choices because we couldn’t fund that level of raise and still have money to do some other things.” Even as it cuts teacher assistants and other support services, Berger insisted, “the overall funding” for K-12 education “has been going up” under GOP leadership.

“I don’t want to be rude,” said Proffitt. “When you account for the increase in student population in North Carolina, the per-pupil expenditure has continued to stay at the bottom… What we’re seeing in the classroom is not more resources. We’re actually seeing considerably less.” (The state’s Department of Public Instruction, led by a Democrat, agrees that last year’s budget made deep cuts.)

“Where would the money come from?” Berger asked.

The protesters suggested restoring the GOP’s 2013 tax cuts, which provided relief primarily to corporations and wealthy individuals. Berger dismissed the idea, saying his party would not raise taxes. (It did, however, increase the tax burden on low-wage workers last year by eliminating the state’s earned-income tax credit.)

Berger touted one of his own innovations, a high-stakes testing and remediation program designed to improve the literacy skills of third graders. The teachers told the senator that he was missing the bigger picture. “Third grade is way too late,” said Kristin Beller. Seventy percent of the children at her school come from families poor enough to qualify for free or reduced lunches. “These students come in light-years behind where they should be because of the cycle of poverty. Their parents aren’t able to spend time with them at home… because they’re working so hard at these minimum-wage jobs, second and third shifts, repeatedly. They have baby sitters and cousins taking care of them. So when they come into kindergarten, we are working like mad trying to get them to a point where they will not be forever behind. And it’s just an impossible task when you don’t have an assistant in the room.”

The protesters presented three demands to Berger: restore the TAs to the budget; decouple the pay raises from the waiver of tenure protection; and meet again with stakeholders later this month. The senator dismissed the first two ideas but agreed to the third—and the promise of another conversation convinced the fifteen advocates to leave the building without getting arrested.