“It was, bar none, the worst legislative process I’ve ever been through,” Rep. Rick Glazier told the U.S. District Court. 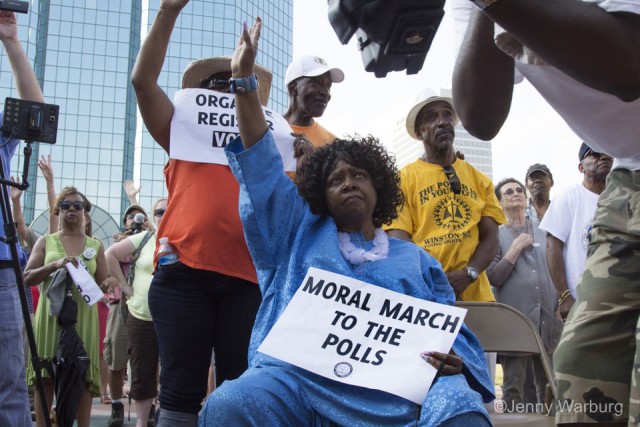 Norma Corley (center, in blue) of Winston-Salem was among several hundred people who attended a “March to the Polls” rally on July 7, 2014, after the first day of the preliminary-injunction hearing challenging North Carolina’s new voting law. Photo © 2014 by Jenny Warburg.

AT THE U.S. DISTRICT COURT IN WINSTON-SALEM, Rick Glazier, a Democratic state legislator, took the witness stand on Tuesday, the second morning of a hearing on North Carolina’s restrictive new voting law, the enforcement of which the U.S. Department of Justice, the NAACP, and the League of Women Voters are seeking to halt.

Glazier’s testimony, unflinching but emotional, offered a vivid look at the cavalier manner by which some in a torrent of new state laws have been enacted. In particular, Glazier laid out how his Republican colleagues—with almost no study or debate—stripped away more than a decade’s worth of reforms that had dramatically increased ballot access for African Americans.

Voting rights have been a volatile issue in North Carolina, where Republicans recently took control of both the legislature and the governor’s office. Of all the far-reaching policy changes that have given rise to the state’s Moral Monday protest movement, none cuts deeper into the psyches of many progressives than the recent election-law overhaul. “I can’t believe we are seeing this day again,” says Rosanell Eaton, a 93-year-old African-American co-plaintiff, who recalls enduring a literacy test when she first registered to vote. “Dr. [Martin Luther] King would be having a fit.”

The 49-page act, passed in July 2013, eviscerated a suite of recent reforms that had pumped up voter turnout in North Carolina. Early-voting days—which allowed voting on weekends, facilitating votes by people with rigid work schedules and church programs that bring “souls to the polls” after Sunday services—were cut by 40 percent. New voters could no longer register and cast their first ballots at the same time. Nor could 16- and 17-year-olds “preregister” at their high schools to ensure they’d be on the rolls when they turned 18. Voters who showed up at the wrong precincts, either by accident or because of time constraints, lost the flexibility to vote in certain races. The new law also requires voters to show government-issued photo IDs starting in 2016. Student IDs, even from state schools, won’t count.

State lawmakers passed the bill just a month after the U.S. Supreme Court’s Shelby County vs. Holder decision, which invalidated a section of the 1965 Voting Rights Act requiring some jurisdictions—including forty North Carolina counties with histories of racial discrimination—to get federal approval for new election policies. The timing was no coincidence: Republican officials said they were awaiting the Shelby decision before unveiling their planned revamp. They described their measure as an effort to reduce fraud and ensure consistency. Civil-rights leaders call those arguments smokescreens, noting in particular that documented impersonation fraud has been virtually non-existent in North Carolina. 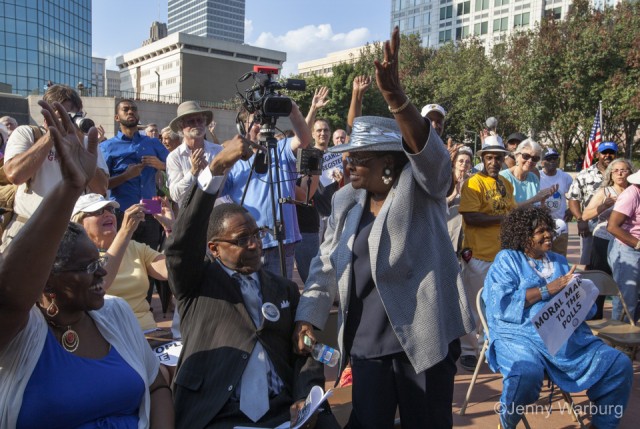 Mary Perry, 84, of Wendell, North Carolina, stands and waves to the crowd at a Moral Monday demonstration on July 7, 2014, near the U.S. District Court building in downtown Winston-Salem as she is acknowledged for her role as a plaintiff in the NAACP’s voting-rights lawsuit. Photo © 2014 by Jenny Warburg.

“The fact that they were able to get this bill together and passed within days of theShelby opinion certainly suggests a design to make it more difficult for African Americans and racial minorities to exercise their right to vote,” says Irving Joyner, a law professor at North Carolina Central University who is active in the NAACP. “The courts were our last resort.”

Last August, the North Carolina NAACP sued state officials to the overturn portions of the law. Additional lawsuits were filed by the state’s League of Women Voters and the Justice Department, both of which called the law discriminatory against African Americans. The cases won’t go to trial until 2015. But this week in Winston-Salem, U.S. District Court Judge Thomas Schroeder is listening to arguments about whether he should temporarily block the new voting restrictions until the case can be fully argued.

“House Bill 589 was enacted with a discriminatory purpose,” Catherine Meza, a Justice Department attorney, declared during one of several opening statements. Members of the state legislature who supported the bill had requested and received statistics that showed how the bill would decrease voter participation and enacted it anyway, she said, through “a series of departures from the normal legislative process.” In response, North Carolina Deputy Attorney General Alexander Peters called the harm “hypothetical,” claiming that turnout during the 2014 primaries had not suffered.

At the hearing, testimony was heard from state and local election officials, voting-rights activists, and a social scientist. Some of the most stirring testimony, though, came from Glazier, who as a lawmaker watched the measure unfold up close. “It was, bar none, the worst legislative process I’ve ever been through,” said the white Fayetteville attorney, who has served in the House since 2001. “This is in a league by itself.”

IT DIDN’T START OUT THAT WAY. When House Bill 589 was first introduced in April 2013, it was a short and narrowly focused voter-ID bill. David Lewis, the Republican chair of the House Elections Committee, invited legislators from both parties to weigh in. Democrats offered suggestions to soften some requirements—for example, allowing the use of student ID cards from state universities and community colleges—and those ideas were initially accepted, Glazier said. There were public forums, testimony from experts invited by both Democrats and Republicans, and opportunity for amendments. The events surrounding the bill’s introduction amounted to “the best process I have ever seen,” Glazier testified in court Tuesday.

The bill passed the House 81-36, then sat for three months in the Senate until after the Shelby  decision. But the new version that emerged bore little resemblance to the original. “It was a 90-percent different bill,” Glazier testified. All the compromises were stripped out, and instead it was filled with provisions that would harm black voter participation. The bill sailed through the state Senate and was immediately sent to the House by special messenger.

There was no time to review the new proposals, Glazier said. No committee hearings. No opportunity for “scholarly understanding” of the implications. No fiscal-impact report from the non-partisan legislative staff. When the measure reached the House floor, debate was limited to about two hours. Such a process might have been appropriate to a bill regulating golf carts, Glazier said, but not to a major policy bill with significant civil-rights implications.

“It was the most emotional two hours I ever spent in public office,” Glazier said about the House debate. “This was, for many members, a feeling like their life’s work was being rolled back.” Winning poll access for African Americans was a pivotal goal of the civil rights movement, paid for with retaliatory assassinations, bombings, and arrests of activists in the 1960s. Among the Democrats reviewing the new bill, “most of us felt it was an ambush on the people of North Carolina.”

Rep. H.M. “Mickey” Michaux, Jr., a Durham Democrat who in 1977 became the South’s first African-American U.S. Attorney since Reconstruction, stood on the House floor with tears in his eyes, Glazier said. All forty-one Democratic legislators asked to speak in opposition to the bill. 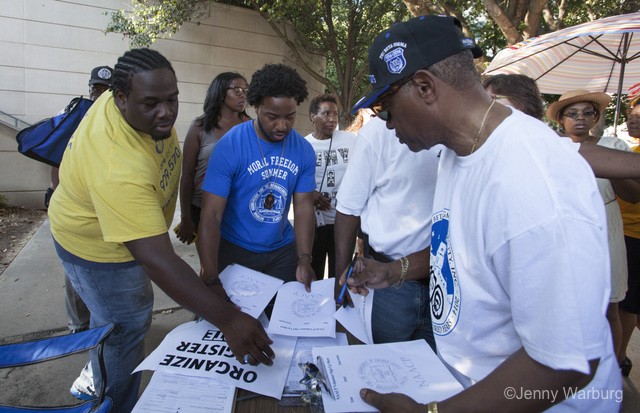 Organizers at a July 7, 2014, Moral Monday demonstration near the U.S. District Court building in Winston-Salem, North Carolina, sign up volunteers for the movement’s Moral Freedom Summer, a voter-registration and mobilization effort. Photo © 2014 by Jenny Warburg.

By contrast, only Lewis, the Republican committee chair, spoke in favor. As Democrats pleaded for the bill’s defeat, “there was hardly a person on the other side looking up from their notes or their computer,” Glazier said. “I knew what that meant… It was clear to me that directions were given that only Rep. Lewis was to speak.”

At the end of the speeches, the Democrats broke protocol and stood up to vote “no” in unison. The bill passed on a party-line vote. Some Democratic lawmakers prayed aloud in the House chamber, hands on one another’s shoulders. A Republican friend walked over to Glazier to apologize.

“I had never been through anything like it in public life, and doubt I will again,” Glazier said. “If you were writing a textbook on how to write a bill and how to govern a legislature, this would be the textbook example of how not to do it.”

The federal court hearing in Winston-Salem is expected to continue for another day or two. Legal observers are not expecting Judge Schroeder, who was appointed by President George W. Bush, to rule immediately from the bench.