Originally published in The American Prospect.
All photos © 2014 by Jenny Warburg. 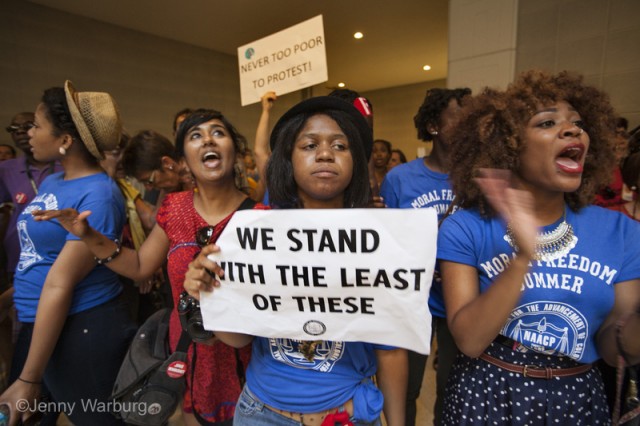 The North Carolina NAACP’s Moral Freedom Summer organizers, shown here at a Raleigh protest, fanned out across the state to register and educate voters in advance of the November 2014 elections.

“I NORMALLY WEAR CUFF LINKS,” the Rev. William Barber II told the 75 activists, black and white, who filled the pews at Davie Street Presbyterian Church in downtown Raleigh Monday night. “But it’s time to roll up our sleeves.”

With those words, the president of the North Carolina NAACP launched the next phase of the Moral Monday movement, the broad faith-based response to the state’s recent sharp-right policy turn.

The movement, founded by Barber in 2013 and backed by dozens of church and advocacy groups, is temporarily shifting its attention away from the civil-disobedience protests that yielded more than 1,000 arrests. Between now and Election Day in November, Moral Monday leaders plan to concentrate on local communities and a federal courtroom, confronting what Barber calls “the most regressive voter-suppression law passed by any state in this country since Jim Crow.”

Until last year, North Carolina boasted a national reputation for improving access to the ballot, particularly for young voters and members of minority groups. Starting in 2000, spurred by grassroots lobbying, the state incrementally removed obstacles to registration and turnout. Early voting—paired with same-day registration—enabled churches to run buses to the polls after Sunday services and blue-collar workers to vote on weekends. Preregistration made it possible for 16- and 17-year-olds to sign up in advance of their 18th birthdays at their high schools (so that on the day they were eligible to vote for the first time, they would already be on the rolls). “Out of precinct” voting counted the ballots of those who accidentally showed up at the wrong polling stations within their counties. 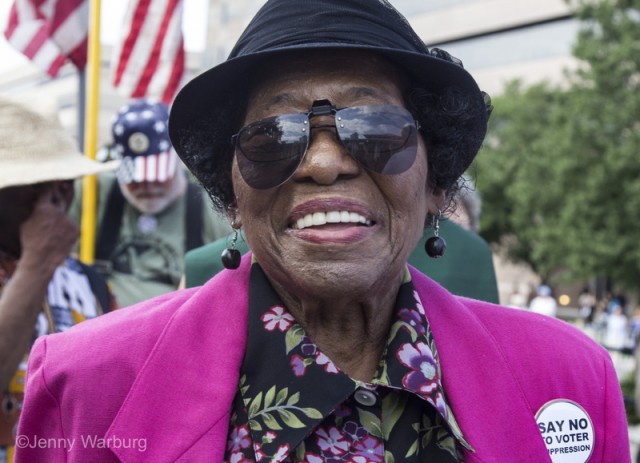 Rosanell Eaton, 93, recalls being forced to recite the preamble to the Constitution as a test for voter registraton in the 1940s. She’s now a plaintiff in the NAACP lawsuit to overturn North Carolina’s restrictive new voting law.

The results of these reforms were dramatic. In 2012, North Carolina ranked 11th among the states in turnout among voter-eligible adults, according to the United States Elections Project at George Mason University. In 1996, the state had ranked 43rd. The new laws  helped Barack Obama carry the state in the 2008 presidential election.

“Part of the reason the Obama folks put so many resources into North Carolina was same-day registration,” says Bob Hall, executive director of Democracy North Carolina, a non-partisan group that advocated for many of the reforms. Hall notes that Obama carried early voters in 2008 but lost among Election Day voters to Republican John McCain. Blacks have used Sunday voting, in particular, in much higher proportions than whites.

“We were more progressive than most Northern states,” Carolyn Coleman, state NAACP vice president, said at Monday’s meeting. “Same-day registration? That was unheard-of in the South.”

In 2011, Republicans, with the help of free-spending non-profit advocacy groups, seized both chambers of the legislature, also called the General Assembly, from the Democrats. Republican Pat McCrory won the governor’s mansion two years later, giving his party its first lock on North Carolina’s government since 1870. That set the stage for last year’s overhaul of the state’s election laws: In a single bill, lawmakers eliminated same-day registration, youth preregistration and out-of-precinct voting, and reduced the number of days of early voting. They required voters to show government-issued photo identification starting in 2016; student ID cards from state universities won’t be honored. Republicans say the law was aimed at creating consistency and eliminating fraud. State statistics show almost no documented cases of impersonation fraud at the polls.

“All the things that some of us have worked so hard for—all of that’s been eliminated,” Coleman said. “Eradicated.” 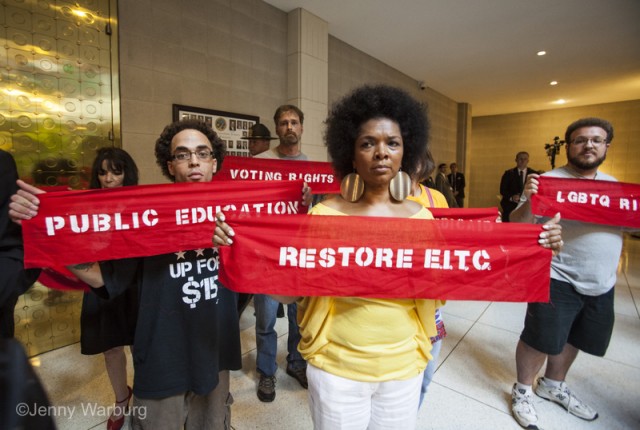 MANY OF THOSE GATHERED AT DAVIE Street Presbyterian Church were veterans of the civil-rights movement of the 1960s, or at least old enough to remember it. Even for those a generation younger—Barber was born two days after the 1963 March on Washington—the current voting-rights struggle evokes memories of an era when organizers lost their lives trying to secure the vote for African Americans. Last month marked the fiftieth anniversary of the triple-murder of James Chaney, Michael Schwerner, and Andrew Goodman in Philadelphia, Mississippi, during the voter-registration push known as Freedom Summer. Other civil-rights activists that summer suffered beatings, arsons, and fire bombings, not to mention arrests.

“The ink in the pens that President Johnson used to sign the Civil Rights Act and the Voting Rights Act were mixed with blood,” Barber said from the pulpit, drawing the word blood into about four syllables. “Every taste of freedom we have came through the blood. Every ounce of equality came through the blood. And in the name of the blood of those who sacrificed, we ought to be fired up, and we ought to organize. We ought to register, and we ought to vote like never before.” The entire sanctuary jumped to its feet.

In addition to the Raleigh protests, the state NAACP and its partners have mounted a two-fold response to new voter law. The organization has sued the state to overturn the measure, saying in a legal brief that it “severely impairs access to the franchise of all North Carolinians—but especially African-American and young voters.” The lead individual plaintiff is 93-year-old Rosanell Eaton, an African-American NAACP member who says that, as a young woman, she was forced to recite the preamble to the Constitution before she could register. According to the legal complaint, Eaton would need to change the name on her identification documents to maintain her eligibility to vote.

A full trial is scheduled for 2015. Next week, though, a federal judge in Winston-Salem will hear arguments about whether to block the law until then.

The second part of the coalition’s response is a massive effort to register and mobilize voters. Some of this will happen informally: in churches, barber shops, retirement homes, and fraternal organizations. The NAACP has also hired and trained 34 young community organizers, who have fanned out across North Carolina as part of what’s called Moral Freedom Summer. Like the original 1964 Freedom Summer in Mississippi, this one will focus largely on access to the polls. Barber says his organization hopes to register 50,000 new North Carolinians.

Monday’s meeting, live-streamed to listening parties across the state, was designed to inspire local efforts—in part by tying voting rights to the other issues embraced by the NAACP’s coalition partners. By making it harder for black, Latino, working-class, and young North Carolinians to vote, Barber said, the GOP majority will be able to keep in place its new policies, including tax cuts for large businesses and the wealthy; a refusal to expand Medicaid; restrictions on abortion and same-sex partner recognition; looser environmental regulations; and cuts to public education and unemployment benefits. “Voting isn’t just about the ballot,” Barber said. “It’s about your life.”

And, in keeping with the Moral Monday theme, the battle for ballot access was cast in religious terms Monday night.

“Voting rights are a spiritual right,” said the Rev. Jimmie Hawkins, a Presbyterian minister in Durham, in a speech directed at legislators. “You can’t impede my right to vote and then tell me to go to church and…ask God that everything’s going to be all right. Well, I did that. And God told me to tell them that I can vote and I don’t need a voter ID because God knows who I am. God knows that I am a citizen of the State North Carolina. God told me to tell the General Assembly that early voting should be expanded and not cut. God told me to tell the General Assembly that I should be able to register and vote at the same time…

“And God is saying to us today that the purpose of these limitations on the right to vote are to prevent, to discourage, and disenfranchise citizens of the state of North Carolina,” Hawkins continued. “And our God says no—no way, not on His watch and not on our watch.”