Since taking control of state government in 2011, Republicans rolled back North Carolina’s progressive voting laws. A new regime of fewer voting days and voter ID requirements will be in place for November’s legislative and congressional elections.

Originally published in The American Prospect 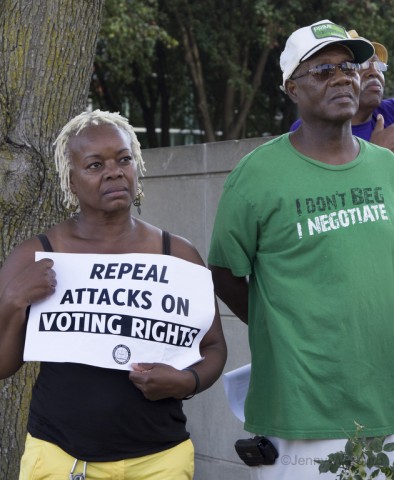 While a federal judge in Winston-Salem heard testimony about North Carolina’s new voting restrictions last month, activists gathered at a nearby plaza to protest the law. Photo © 2014 by Jenny Warburg.

A FEDERAL JUDGE HAS TEMPORARILY authorized North Carolina to implement a sweeping new law that threatens to reduce access to the polls, particularly for African-American, Latino, and young voters. The ruling by U.S. District Judge Thomas Schroeder, a George W. Bush appointee, is an early test of the Supreme Court’s Shelby County v. Holder decision, which overturned key parts of the Voting Rights Act.

In 2000, North Carolina started rolling out efforts to make it easier to register and vote, only to yank those efforts back thirteen years later. When the state legislature was controlled by Democrats, it authorized counties to conduct up to seventeen days of early voting, including Sunday voting, which enabled black churches to transport parishioners to the polls. It also allowed citizens to register and vote on the same day. Sixteen- and seventeen-year-olds could preregister, often at their high schools, ensuring they’d be on the rolls when they turned eighteen. And voters who showed up at the wrong precinct could still cast ballots in certain races. From 1996 to 2012, the state’s ranking in turnout among voter-eligible adults shot up from 43rd to 11th, according to the United States Elections Project at George Mason University. African-American participation pulled even with white participation.

When Republicans took over the legislature in 2011—and the governor’s mansion in 2013—one of their goals was to roll back these reforms. With the high court’s Shelby decision, which eliminated the Voting Rights Act’s “preclearance” requirement, they saw an opportunity to do just that. Before Shelby, places with histories of racial discrimination, including forty North Carolina counties, needed federal approval before changing election policies.

Less than seven weeks after Shelby, Governor Pat McCrory signed a bill cutting early voting to ten days and eliminating same-day registration, as well as out-of-precinct voting and youth preregistration. Starting in 2016, voters will also have to show state-issued photo identification; poll workers will not be allowed to accept student ID cards, even from state institutions. The forty-eight-page law creates a particular hardship for voters without vehicles, workers without flexible schedules, and those who are less educated and more transient.

Republicans insisted they had legitimate reasons for the changes: to prevent fraud, guarantee statewide uniformity, and give county election boards more time to verify new registrations. Democrats called these reasons smokescreens for depressing the turnout among black, Hispanic, and younger North Carolinians.

“Our anger tonight is palpable,” Representative Rick Glazier, a white Democrat from Fayetteville, said during the House debate. “Passing of this bill is a political call to arms.”

Shortly after the vote passed along party lines, the state chapters of the NAACP and League of Women Voters, along with the U.S. Department of Justice, filed three separate federal lawsuits seeking to overturn the law. The case goes to trial in 2015. But last month, Judge Schroeder held a hearing in Winston-Salem to consider temporarily restoring the seventeen days of early voting, same-day registration (SDR), teenage preregistration, and out-of-precinct voting. The NAACP invited supporters to pack the courtroom and also held a voting-rights rally that drew about 800 people.

DURING THE FOUR-DAY HEARING, attorneys for the plaintiffs called eleven witnesses to the stand. One of them, University of Wisconsin-Madison political scientist Barry Burden, testified that poll taxes and literacy tests, implemented in the late 1800s, suppressed black participation for more than a century, continuing to discourage voters long after they were struck down or repealed.

“Only in the last two presidential elections, 2008 and 2012, does black turnout reach the levels of white turnout,” Burden testified. “To me, that implies that black turnout has reached this fragile precipice. It is not a robust pattern of voter participation, one that is likely to withstand changes in election law.”

The state called no witnesses. Instead, it argued that lawmakers had the right to change the law, as well as legitimate non-racial reasons. “While they were certainly shown participation rates in early voting and SDR by minorities, there was no information presented that said, oh, and by the way, if you get rid of these, then, by necessity, that’s going to mean that minorities will not be able to vote and register at the same rate,” said Phil Strach, a private-practice attorney representing the state.

Last Friday, Judge Schroeder issued a 125-page decision in which he declined to block any of the new law until the 2015 trial. The NAACP and other plaintiffs have “plausible claims,” he wrote. “However, a preliminary injunction is an extraordinary remedy to be granted in this circuit only upon a ‘clear showing’ of entitlement.”

“In light of the historical struggle for African-Americans’ voting rights,” Schroeder admitted, “North Carolinians have reason to be wary of changes to voting laws.” But, he added, the state has made racial progress since the days of Jim Crow.

Schroeder focused much of his opinion on same-day registration and voting, which voters from minority groups use disproportionately. He agreed that eliminating SDR “will bear more heavily on African Americans than whites.” But he added that there was a legitimate reason to abolish the practice: Allowing registrations so close to Election Day, he said, creates a burden for local election officials, who then must scramble to verify voter eligibility before the results are finalized.

The judge hedged on the question of whether GOP lawmakers were intentionally trying to suppress the African-American vote. During the legislative debate, Schroeder wrote, there were no overtly “racial” comments by supporters of the new law. And, according testimony by MIT political scientist Charles Stewart, eliminating SDR “would have affected just 3 percent of black voters (and 1.5 percent of whites) in 2012.” (That was the judge’s language, not Stewart’s.) “Thus, the disproportionate impact of [the law’s] elimination of SDR supports a finding of discriminatory intent, but only moderately so.”

If there was one comfort for voting-rights activists, it was that Schroeder also denied the state’s motion to dismiss the lawsuits—setting the stage for next year’s full trial. Attorneys for the plaintiffs say they’ll present a stronger case in 2015. They’ve been fighting to force legislators to release their internal correspondence, which could reveal whether Republicans intended to deter African-Americans from voting. Meanwhile, the state NAACP has sent young organizers across the state this summer to register and educate voters in an attempt to counteract the new law’s potential effect. “This opinion,” says Irving Joyner, a North Carolina Central University law professor and member of the NAACP legal team, “is not fatal to our efforts.”