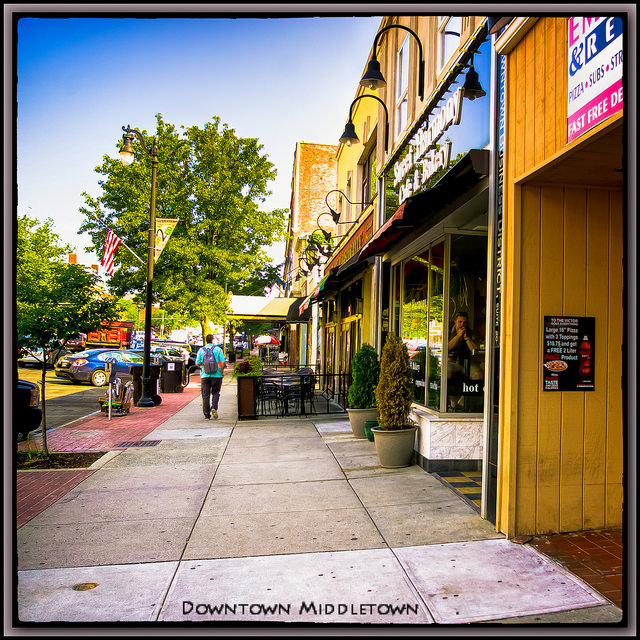 Downtown Middletown, Connecticut, is thriving, partly because it has opted for inclusion.
Photo by Marcus Balcher; republished under a Creative Commons license.

THE SECOND HALF OF THE 20TH century was not kind to America’s Main Streets. Once the hearts of our towns and small cities, many fell victim to the appeal of suburbia. We found what we needed along the edges: quiet cul-de-sacs, indoor malls, the convenience of big-box stores. Mail-­order catalogs and then the Internet allowed us to shop from home. But something was lost in the process: the sense of community ­created by a space where people could watch parades, meet for dinner or drinks, or enjoy an outdoor concert.

Today, we’re rediscovering the value of healthy downtowns, which offer history and culture, unique local businesses, and the pleasure of walking along lively streets. “In the past several years, any number of communities have successfully revitalized their downtowns,” says Patrice Frey, president of the National Main Street Center, a subsidiary of the National Trust for Historic Preservation.

Still, reviving Main Street requires residents, businesses, and governments to work together, one step at a time. Every town’s recovery looks different, but here are some of the ways passionate citizens have reinvigor­ated the communities they love.

In 2006, a pioneering couple opened the Cafe on Broadway in downtown Siloam Springs, Ark. (pop. 15,856, and one of our nominees for Amer­ica’s Best Main Street), and had the foresight to build apartments upstairs. Then a ­developer turned a nearby 19th-century building into five residential loft units. “Once there were locals living downtown, it added an around-the-clock vibrancy,” says Meredith Bergstrom, executive director of Main Street Siloam Springs. Soon businesses appealing to the new residents opened: a pizzeria, a hair salon, a clothing boutique, a flower shop. More living spaces followed. “If a Main Street is only commercial, by 5 or 6 p.m., it’s dead,” says Miles Orvell, author of The Death and Life of Main Street.

“I could list 100 criteria that make up a good downtown,” says Donovan Rypkema, principal of PlaceEconomics, a real estate and economic development firm in Washington, D.C. “But if I were limited to one, it would be this: Are there people on the street?” Littleton, N.H. (pop. 5,935), encourages walking with raised “bump-outs” in the road that slow car traffic, and with a covered pedestrian bridge that spans the Ammonoosuc River. The town has also worked to make strolling fun, by placing pianos on the street for anyone to play and creating an alleyway covered with hanging umbrellas. As a result, says National Main Street Center’s director of coordinating program services, Kathy La Plante, “Littleton is a community where you park once and spend hours walking.”

Preserve the Best Of What Makes a Town Special

Whether it’s Victorian architecture, industrial history, or a mountain view, every town has something distinctive to build upon. For Astoria, Ore. (pop. 9,516), revitalization means developing an old waterfront along the Columbia River that was once crammed with warehouses and canneries—maintaining the “gritty character” of the buildings while finding new purposes for them, says Rypkema. Now there are restaurants, retail shops, galleries, a historic trolley, and a five-mile-long Riverwalk. “You walk the street and you can still imagine the tough-talkin’ sailors,” he says. “They are building on that in a positive way: ‘This might not be a storybook version, but it’s our town.’ ”

By the 1980s, the historic buildings of Sheboygan Falls, Wis. (pop. 7,773), had deteriorated so much that “a lot of people were ready to bring in the wrecking ball,” says Joe Lawniczak, downtown design specialist at the Wisconsin Economic Development Corporation. But instead of demolishing the buildings, a local volunteer crew called the Falls Facelifters began removing inappropriate alterations—like the redwood siding and aluminum awning that covered the cream brick ­facade of an old retail space. The free labor from committed residents made it cheaper for owners to complete the restorations, and with the additional help of grants and low-­interest loans, the structures regained their ­splendor, one by one. The cosmetic improvements, in turn, lured new businesses.

Over 10 years ago in Emporia, Kan. (pop. 24,799), leaders of the city’s nonprofit downtown-revitalization group began talking with the owners of both healthy and struggling local businesses and discovered three pressing needs: training, financing, and ­logistical support. In ­response, the organization partnered with two local colleges to create a “Start Your Own Business” class. Over the past eight years, that class has helped launch or expand 42 enterprises. In addition, the group developed zero-interest small-business loans, in part ­using grants from a local foundation. And it created a program that allows new business owners to meet with several government agencies at once. “Instead of an entrepreneur getting frustrated as they’re bouncing between [building and fire] code departments and engineering and health, we have all those individuals meet together,” says executive director Casey Woods.

A town that facilitates everyone’s participation—from energetic young adults to retirees looking to downsize—is more likely to thrive. Immigrants can be a key part of the mix, too. According to Michael Burayidi, a professor of ­urban planning at Ball State University in Indiana, immigrants tend to be ­“enterprising” business owners whose brick-and-mortar establishments attract ­customers downtown. Burayidi points to Middletown, Conn. (pop. 47,333), where immigrant entrepreneurs have proven resilient even during hard times. “We appreciate every ­opportunity that America offers,” says Chu Ngo, a Vietnamese-born former research scientist who last year opened a restaurant called Lan Chi’s. “Here the door is open to us—and we’re going to make it work.”