Originally published in The American Prospect 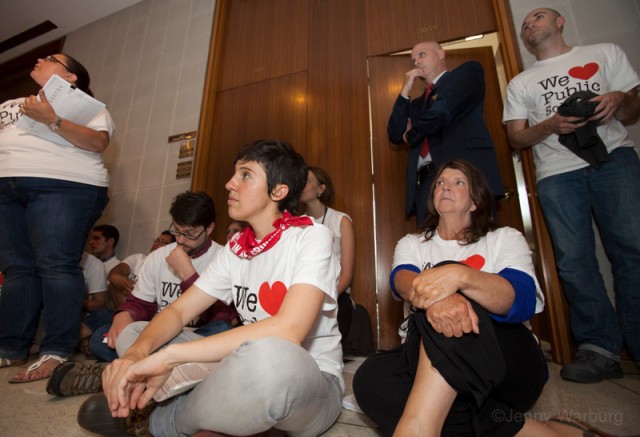 WHEN JOY BOOTHE SHOWED UP at last week’s Moral Monday rally in her hometown of Burnsville, North Carolina, she was fighting both sleep- and sun-deprivation. Boothe had just driven in from Asheville, 35 miles away, where her husband was recovering from a double knee replacement.

Boothe, a vice president of the local NAACP branch, was referring to the ongoing political upheaval in Raleigh, the state capital, four hours east of this small mountain town. There, an emboldened Republican legislative majority had cut unemployment benefits, turned away federal Medicaid funds, slashed education budgets, and rolled back voting reforms. In response, the state NAACP launched the Moral Monday movement, a faith-based pushback that has gained traction among a broad array of religious and political organizations.

The most visible protests have happened at the state legislature, where about 1,000 people have been arrested for civil disobedience since 2013. (All but a handful of cases were dismissed last month.) But the movement has also spread to unlikely corners of North Carolina. Boothe’s NAACP chapter, composed almost entirely of white members like herself, covers Yancey and Mitchell counties, which are less than 1 percent African American. The two counties combined gave Republican Mitt Romney 64 percent of their votes in the 2012 presidential race.

While the Moral Monday events here have been dwarfed by the mass protests in larger cities—last week’s Burnsville rally attracted 175 people—they nonetheless signal a progressive awakening in some of the state’s most remote and conservative Blue Ridge mountain hollows. In Burnsville, population 1,700, that turnout is equivalent to more than 10 percent of the town’s residents, although some came from the surrounding area.

Community ties are strong in Burnsville, the Yancey County seat, and challenging authority takes considerable more courage than in a larger city. Activists like Boothe, a 62-year-old former Chamber of Commerce president and “recovering people-pleaser,” say the decisions to raise their voices have come at the cost of alienating neighbors and loved ones. Those decisions have also been the product of some deeply personal journeys.

Boothe is not a North Carolina native. She was born into a South Alabama farming and sharecropping family that, during her childhood, still plowed behind mules. One grandmother died of an infection at the age of 17, six weeks after childbirth, for lack of medical care. Her parents, teens when she was born, were the first in their families to graduate from high school. When Alabama’s changing farm economy drove her family off the land during the 1950s, her father’s side of the family packed their hoes, shovels, and home-stuffed cotton mattresses into a farm truck and crossed the border into Florida.

Boothe’s father found work as the glue foreman at a plywood mill. It was a big metal building with a concrete floor and a predominantly black work force. “There was no ventilation, no safety, no mask,” she recalls. Perhaps because of the chemical fumes, her father started to hallucinate, she says, and his behavior grew erratic. In 1963, when Boothe was 11, the family was getting ready for Wednesday evening prayer services when her father snapped. He shot her mother fatally in the heart, asked his daughter if she loved him, then turned the rifle on himself.

“My dad was the most gentle of his brothers,” Boothe says. “He didn’t like to hunt. He was a song leader and deacon at the church.” After the crushing grief came an epiphany for the orphaned daughter: “When terrible things happen, it isn’t always just the perpetrator that’s responsible. There’s a whole societal, economic underpinning. While I hold my daddy accountable for what he did when he picked up the rifle, I’ve come to believe that there were many fingers pulling the trigger.”

Returning to the care of her grandparents, Boothe was taught never to touch a dark-skinned hand. Relatives used racial epithets and blamed African Americans who worked at nearby farms for their own poverty. Boothe had picked butter beans and crowder peas herself and knew how low the wages were—even for white workers, but especially for blacks. An “electrifying jolt” of insight, she says, had come when Boothe worked alongside an African-American woman who carried a baby on her back and kept another child under a nearby shade tree, sedated with opium tincture. With a ten-year-old’s simplicity, Boothe realized that another childhood message—that blacks don’t feel pain—was simply untrue. “I know how hot the sun is, how hard this is for me,” she remembers thinking. “It’s just as hard for her.”

Imbued with that nascent political understanding, Boothe graduated high school in 1970. She moved to North Carolina two years later, lured by a newspaper ad for an abandoned farm in Yancey County. She planned to spend only a year in the mountains. Instead she settled down and continued the journey that would eventually lead her to Moral Monday.

BOOTHE CLEANED HOUSES, CLEARED BRUSH, taught outdoor skills like hiking. She sewed belt loops at a jeans factory and transcribed notes for an author. She met her husband and they built a home from salvaged lumber, including the wood from three military barracks they had torn down themselves. Building the house, sometimes during frigid weather, was a slog: Boothe was sanding floors and hauling roof shingles when she was pregnant with her oldest son. “I was so determined to create what I had lost,” she says. She became an active community member, working to establish safe homes for domestic-violence victims and even housing some of them herself. She spent the last fourteen years of her career as a supervisor at a hospital fitness and rehabilitation center.

After the 2010 elections flipped control of the state legislature to the GOP—and particularly after the 2012 election of Republican Governor Pat McCrory—Boothe read about the gutting of the state’s safety net. Her own county had long suffered from factory closures, along with the disappearance of family farms, and she knew the cuts would directly harm her neighbors. “With all the resources we have, people should be able to live their lives with dignity: to have work, to have food, to have health care,” she says. She also began reading about the Moral Monday movement and its magnetic leader, the Rev. William Barber II, president of the North Carolina NAACP.

In August 2013, Barber spoke at an Episcopal church in Spruce Pine, just down the road in Mitchell County, the most Republican of all North Carolina’s counties. Boothe attended his talk, which was characteristically filled with Biblical references. “Isaiah 58 says if you want to be a repairer of the breach, you have to care for the hurting and the poor and loose the bands of wickedness,” Barber told the packed room. “And in Hebrew, the phrase ‘loose the bands of wickedness’ actually means pay people what they deserve for a day’s work.”

Boothe was impressed by Barber’s “deep listening” skills and his abilities to educate and to inspire hope. “I never see anyone as a guru–ever,” she says. “But that sealed the deal for me.” As the mother of a gay man, she was also moved by how the movement, with its religious undertones, still included LGBT rights in its mission. “If he wasn’t included in this movement,” she says of her son, “I wouldn’t be working for it.”

Two documentary filmmakers she met at the Episcopal church invited her to travel to Selma, Alabama, with some other Moral Monday activists. There they met with survivors of 1965’s Bloody Sunday, when police used whips, billy clubs, and tear gas to attack civil-rights marchers trying to cross Selma’s Edmund Pettus Bridge.

Since then, Boothe has left her job, in part to spend more time working on Moral Monday actions and establishing the local chapter. In June she joined 14 other activists who sat outside the Raleigh office of Senate President Pro Tempore Phil Berger to protest education cuts made and proposed by the Republican majority, refusing to leave until the lawmaker had met with them. Back at home, building support in the mountains has been slow and frustrating. But Boothe, who built her house by hand, says she understands the value of the slog, even as she sometimes grows impatient. Change is slow but it happens: Many of her own relatives have moved beyond the venal racial attitudes of her childhood. That gives her hope.

“Whether the Moral Monday movement is successful, I have no choice but to keep going,” she says. She thinks about the tragedies and privations of her childhood—and how epiphanies after her parents’ death inspired her to fight for justice at a structural level. “Honestly,” she says, “a lot of what we do in our life journey is to heal ourselves.”