Tar Heel progressives may not have loved their senator, but they worked hard to re-elect her—and thought they would. 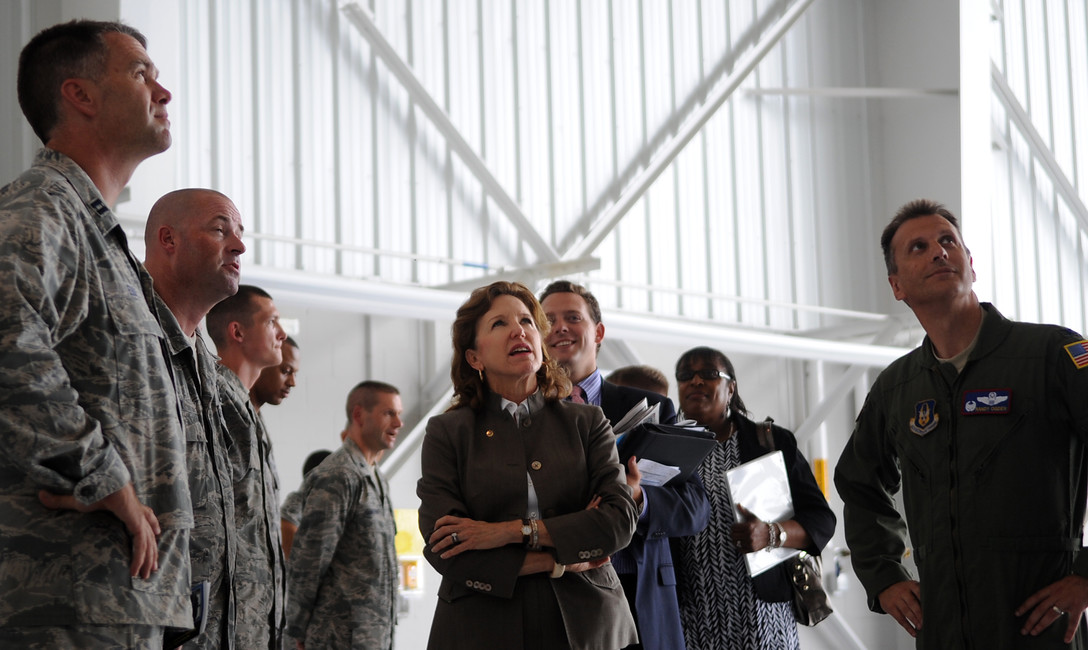 U.S. Senator Kay Hagan was defeated by Thom Tillis, who had relentlessly linked her to President Obama. Photo courtesy of U.S. Department of Defense.

“We’re really hoping to clinch that,” she told the bar’s patrons. “We may have different feelings about Kay Hagan”—whose lackluster first Senate term and middle-of-the-road campaign failed to electrify voters. “But it’s good to know we all have a person we absolutely agree cannot be in the Senate. We cannot let the extreme right take over North Carolina.”

It was the last moment of optimism for Bull City liberals.

The evening started with hope. The Durham People’s Alliance, a progressive watchdog group, had set up a large video screen at 106 Main and flanked it with the North Carolina and U.S. flags. As members drifted in and ordered drinks, they told stories of long, multiracial voting lines at the precincts where they had volunteered.

This seemed like a good omen for Hagan, who had maintained a sliver of a lead in most recent opinion polls. In 2013, the GOP-led state legislature had passed a raft of measures making it harder to vote, particularly for members of minority groups—for example, shortening the early voting period that African-American churches use to transport “souls to the polls” after Sunday services. Durham’s strong turnout seemed like a snub to lawmakers.

The early returns, viewed on the Internet, indeed showed Hagan running ahead of Tillis. Democrats were also winning back some key seats in the state House, which had flipped to Republican control in 2010. Asheville Republican Timothy Moffitt, a board member of the American Legislative Exchange Council (ALEC), which works with state lawmakers to pass pro-corporate legislation, was headed toward defeat. Moffitt had been a favorite to succeed Tillis as Speaker. Also going down was Tom Murry, a Raleigh-area Republican who sponsored the 2011 law barring the state from enforcing the Affordable Care Act’s individual mandate. That bill was based on model legislation written by ALEC.

On a television at the rear of the bar, MSNBC was announcing one Republican U.S. Senate victory after another: Kentucky, West Virginia, Arkansas. It looked, for the moment, like North Carolina might buck the Southern trend.

But then the numbers broke for Tillis, who—during a campaign that topped $100 million between the two candidates—had relentlessly linked his opponent to President Barack Obama. The prospect of a Tillis victory seemed unimaginable in Durham, where the House Speaker’s name was unfavorably linked to a legislature that had cut education funds and jobless benefits, turned away federal Medicare dollars, and made it harder for women to get abortions. A Democratic stronghold with two universities and no majority race, Durham had given Hagan 77 percent of its vote.

Patrons of 106 Main stared at the Internet display as Tillis locked in his two-point lead. “I thought we were doing so well,” said former city council member Lorisa Seibel. “But we’re in the Durham bubble.”

Behind Seibel, a woman turned to her companion. “That’s sickening,” she said of the results, and motioned toward the door. “Let’s go.”

By the time Mike Woodard, a Democratic state senator from a safe district, arrived at 106 Main, the crowd had thinned out considerably. By then, even the state legislative gains looked less impressive. Yes, Democrats had picked up a few seats in the state House of Representatives. But the North Carolina Senate had become slightly more Republican.

Woodard looked up the results of a state Senate district on the South Carolina border. There, a conservative Democrat named Gene McLaurin—a popular ex-mayor who runs a company that sells motor fuels and farm lubricants—lost to Republican auctioneer Tom McInnis. In one 30-second McInnis ad, McLaurin’s face morphed into Obama’s and then back again. The North Carolina Republican Party also linked McLaurin to Obama in a flier that falsely accused the Democrat of voting “to make it easier for illegal immigrants to work.”

“He was doing everything right,” Woodard said of McLaurin. “They turned him into an Obama liberal.” It was an echo of what Tillis had done to Hagan in the U.S. Senate race.

A People’s Alliance leader took down and carefully folded the flags. Most of the remaining customers went home. It would be almost midnight before Tillis’ victory—and with it the GOP’s control of the U.S. Senate—would be confirmed by the national media. By then, the party at 106 Main would be long over.