Originally published in Popular Science as part of its New Faces Of Energy feature. 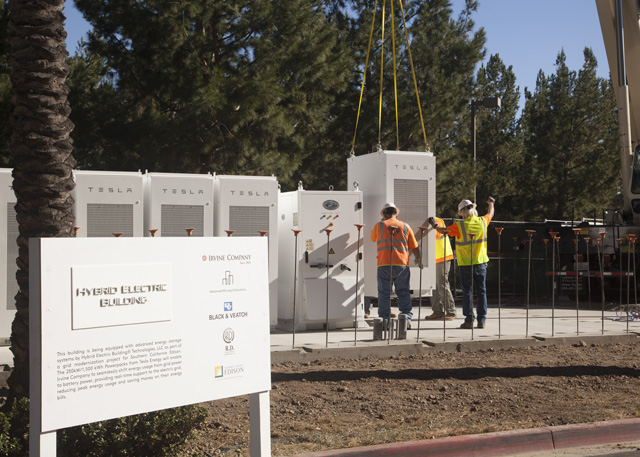 An advanced storage system at the Irvine Company in Southern California. One energy consultant calls the technology a “tectonic shift for utilities.” Photos courtesy of AMS.

SUSAN KENNEDY PULLS HER BLACK BMW into a winery in California’s Sonoma County. She steps out, strides past the stainless-steel fermenting vats, and stops at a concrete pad. There, contractors are installing what appears to be a large metal cabinet—the kind that might store museum specimens. In fact, it’s a 200-kilowatt lithium-ion battery made by the electric-car company Tesla. Its job is to charge from on-site solar panels during the day and from the grid at night. The winery will draw on this battery power when electric rates spike.

“What I like is the modularity,” Kennedy says, eyeing the eight-foot cube. That isn’t a casual observation; Kennedy is shopping. Her San Francisco start-up, Advanced Microgrid Solutions (AMS), needs batteries to fit into parking lots where space is at a premium. That’s how the company plans to revolutionize the electricity grid. Kennedy glances up. “You’re looking at the future,” she says.

Fast-moving and sinewy, Kennedy has spent more than 15 years in the crucible of California energy policy. She has a reputation for speaking bluntly and thinking big. AMS doesn’t just plan to power individual buildings; it intends to turn office complexes and industrial facilities into tools that make the grid more efficient and resilient. 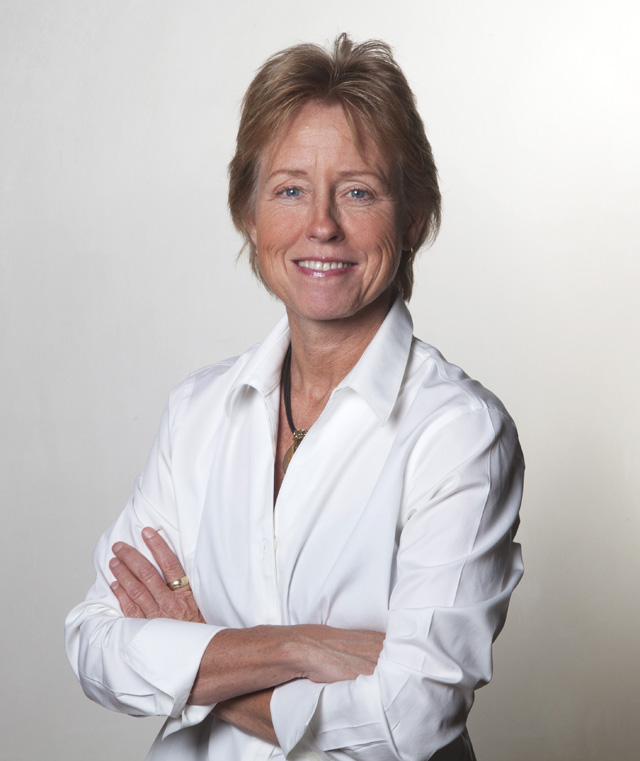 By 2018, AMS will have outfitted 75 to 100 buildings with stationary energy systems. Then on summer days, when everyone is running their pool pumps and air conditioners, these so-called hybrid-electric buildings could shift seamlessly to battery power at the utility’s request. Typically, a utility copes with high demand by bringing an additional power plant online; instead AMS will reduce the utility’s load by up to 50 megawatts—enough to power 20,000 homes. “Susan and her team are unlocking the notion of using customer-side resources as capacity,” says Julie Blunden, an energy consultant who chairs the governing body for the public-private consortium CalCharge. “That is an absolutely tectonic shift for utilities.”

Kennedy felt pressure building along that fault line as far back as 1999. She had just been named cabinet secretary for California’s then-governor, Gray Davis, when she learned that power shortages and high wholesale prices were pushing the state toward an energy crisis. A colleague warned that Californians might soon face brownouts and rolling blackouts.

“Brownouts? That’s third-world,” she remembers thinking. “It was so anathema to everything we understood about our electricity grid that we couldn’t even grok it.” As the governor’s point person for policy issues, Kennedy was charged with keeping the lights on. She did this, in part, with an emergency conservation program that asked corporate and residential customers to scale back their usage. Californians lost power at times in 2000 and 2001, but researchers at Lawrence Berkeley National Laboratory estimate that the belt-tightening prevented 50 to 160 hours of blackouts.

The problem with such a strategy is that it demands sacrifice, such as reducing air conditioning or shutting down production lines. True grid stability would require a painless way to unplug. That seemed like an impossibility during the next decade of Kennedy’s career—first as cabinet secretary, then as a member of the California Public Utilities Commission, and later as chief of staff for Davis’s successor, Arnold Schwarzenegger. Then, batteries matured. “Because of the electric-vehicle market and the cellular market, lithium-ion is now a very advanced technology,” she says. “It is compact, dense, scalable, and the price point is coming down.”

Kennedy pondered how to take maximum advantage. “I was trying to think: How do I use this technology and make it into something grid-scale?” She began talking with Jackalyne Pfannenstiel, a former assistant Navy secretary in charge of energy programs. The two had worked together when both held state energy-policy jobs. “Susan’s project just rang my bell,” says Pfannenstiel, who started her career in the 1970s by studying whether utility customers would shift their consumption from peak to off-peak hours. In 2012, Kennedy and Pfannenstiel founded AMS.

At the same time, California officials were seeing energy storage as critical to achieving a major goal: the transition away from fossil fuels. The year before, state lawmakers had mandated that utilities generate one-third of their energy from renewable sources like solar and wind by 2020. (Governor Jerry Brown wants the figure to hit 50 percent by 2030.) But these resources are not available 24/7. The sun goes down. The wind stops blowing. “We have to match supply to demand all the time,” says Carla Peterman, a public utilities commissioner. “The idea of storage is very natural: We have our closets. We have our pantries. We have our fat cells.”

Furthermore, although the state was soon awash in renewable energy, its antiquated transmission and distribution systems lacked the capacity to move that energy to where it was needed most. Instead of extensive new power lines, Kennedy and others believed, the solution would come in the form of small, flexible power sources near where customers lived. Southern California Edison (SCE) requested proposals to replace 2,221 megawatts of lost capacity. By November 2014, AMS had landed a contract.

The company’s first project, a cluster of about 22 office buildings in Irvine, California, will come online with batteries totaling 10 megawatts by mid-2017. The second phase, in West Los Angeles, will be ready to store 40 megawatts by the following year. SCE will pay AMS, which in turn will provide the buildings with services like energy-management software and energy audits. AMS also plans to supply more battery capacity than SCE needs. Building managers would be able to draw on the extra kilowatts during peak hours to avoid the highest rates. Kennedy estimates that this will reduce electricity costs by 10 to 20 percent.

These “virtual power plants,” to Kennedy, make up the grid of the future: nimble, decentralized, and less reliant on fossil fuels. “Our entire grid was built as a dumb system, where central power stations pushed out electrons and consumers just burned them,” she says. “Storage is the alchemy of turning the customers’ load into something they can control.”