Don’t blame the recent flooding along the Mississippi River on the rain. We created this mess. 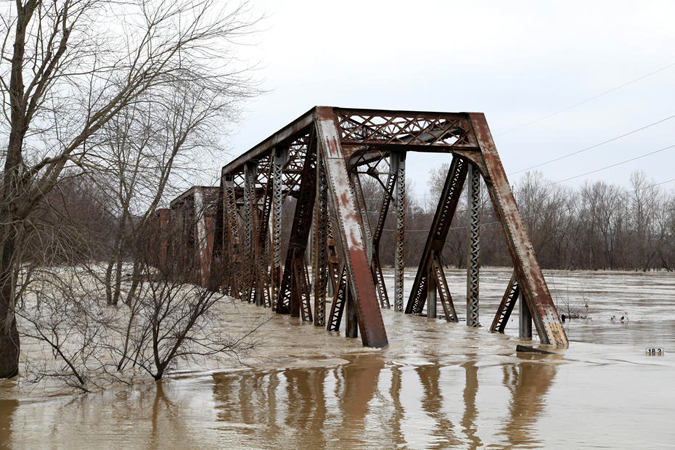 A flooded bridge after the recent deluge in the Midwest. Photo courtesy of Army Corps of Engineers.

TWO DAYS AFTER CHRISTMAS, Jamie Nash-Mayberry received a text message from one of her students during a rare out-of-town vacation. “When u get time,” it said, “check out the river stages.”

After heavy rainfall, the Mississippi River had been steadily rising, and by early January, the floodwaters would ultimately kill 25 people in Illinois and Missouri. The student had texted from Wolf Lake, Illinois, where Nash-Mayberry teaches social studies at Shawnee High School. The farm community butts up against the Mississippi 100 miles south of St. Louis, and residents have long worried about what might happen if its earthen levee gave way.

Back in 2010, after reading a newspaper article about the region’s aging levees, Nash-Mayberry began teaching her students about flood risks in their community. This real-life lesson energized the kids, many of whose families have lived in Wolf Lake for generations. They wrote to elected officials and to Oprah Winfrey. They hosted a summit that attracted levee-board members and Army Corps of Engineers commanders. It was a palpable lesson in citizenship, and each class passed its learning on to the next.

Now, with the river levels rising, Nash-Mayberry’s classroom lessons were playing out in real time. Wolf Lake sits in a vulnerable spot: Not only are its levees dilapidated, but that stretch of the Mississippi is thick with hardware like wing dikes, which are rock jetties that jut perpendicularly into the river from the banks. Structures like these are designed to help barges navigate by concentrating the river’s flow. But as I wrote in this 2014 cover story for onEarth, wing dikes also make floodwaters more turbulent, slowing them down and raising them higher.

As her vacation wound down, Nash-Mayberry continued to receive texts and emails from current and former students, some wondering whether to evacuate. She arrived home to a community mobilizing to stave off disaster. On the 30th, she rustled up meals for fifty farmers hauling their crops to higher ground—they had been stored in grain bins in the floodplain—so their 2015 harvest wouldn’t be lost. The following day, she went down to the bottoms near the river, where she (along with her husband and father) helped farm families load their most precious belongings into trailers.

“The homeowners were flustered,” she says. “When you would ask, ‘Do you want to save this?’ or ‘What’s the plan?’ they really couldn’t answer you. They would say, ‘I don’t know. I don’t know. Ask so-and-so.’”

Then, on January 2, came the sand boils: eruptions of river water into Wolf Lake’s corn and soybean fields, carrying sand stolen from the levees as the water tunneled underground. Boils threaten the structural integrity of the levee, and the eruptions need to be ringed by sandbags to equalize the upward water pressure with a downward force. Hands were needed to fill those bags, so Nash-Mayberry posted a plea on Facebook and made one call after another. About 40 people showed up, she says: teachers, students, parents, and grandparents. “It was a community effort,” recalls Nash-Mayberry. “It made me feel like the [teaching] project has helped give the younger people a sense of Hey, we can make a difference.” 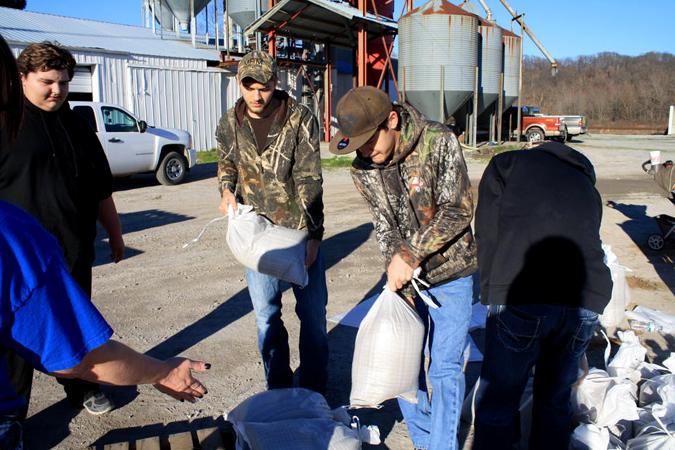 Wolf Lake’s levee stayed intact, and damage was kept to a minimum. With river levels dropping, the county’s voluntary evacuation order was lifted on January 6, and teachers returned to school on the 8th to move computers downstairs from storage. “But all you’ve got to do—to realize how it could have been—is look directly to our south,” Nash-Mayberry says.

There, in Alexander County, a levee protecting 500 people breached twice beginning on New Year’s Day. Videos posted by the Illinois Emergency Management Agency show a torrent of water funneling through a gap in the Len Small Levee and houses and silos poking through what looks like a deep river. After the same levee broke in 2011, inundating the community of Olive Branch, residents there considered moving to higher ground. But FEMA buyout funds were so slow to arrive that the energy to relocate dissipated. A $5 million state buyout in Olive Branch last year was suspended because of a budget impasse.

Almost three hours north of Wolf Lake, Grafton, Illinois, suffered a landslide that blocked the main road through town. Across the river, Missouri suffered considerable damage, too. The floodwaters shut down highways and forced wastewater treatment plants offline. Raw sewage poured into nearby rivers and streams. In West Alton, just above the juncture of the Mississippi and Missouri, some houses sat fully under water that was trapped between the levees designed to protect the town from the two rivers. Missouri Governor Jay Nixon estimated 7,100 structures were damaged in four counties in the St. Louis area.

Scientists point out that the floods, which followed a 10-inch rainfall over three days, were not natural disasters. “The historical Mississippi River would not have responded in such a profound way to this storm,” says Robert Criss, a hydrologist and geochemist at Washington University. But along with the wing dikes and other navigation structures, we’ve seen local governments continue to approve real estate development inside floodplains. To protect the new buildings, they build higher and stronger levees, which give the river ever less room to expand when the rains come.

“The modern river, highly channelized and almost completely walled off from its floodplain, exhibited a sharp response because the water had nowhere to go but up,” Criss says.

After the historic Midwest flood of 1993, Illinois encouraged the removal of vulnerable buildings from floodplains. In Grafton, FEMA funded a voluntary buyout of 70 homes and 18 commercial buildings, and town officials steered development uphill. As a result, except for the landslide, damage in Grafton—which has no levee—was minimized. Even Bobbie Amburg, one of the few residents living in the floodplain (her house is elevated), was unfazed. “The water is surrounding our house right now and we are coming and going by boat,” Amburg, a member of the Board of Aldermen, wrote me January 1. “[But] we are all doing well.”

Missouri, by contrast, has tended to be more permissive about floodplain development.

As a result, “a serious problem has been aggravated,” Criss says. “We have just seen another example that we should not have needed. The Show Me State has been repeatedly shown, yet numerous decision makers blunder on in denial.”

Evan Webb, a graduate of Shawnee High School, shot this video in Alexander County, Illinois, where he grew up, and published it Jan. 1, during the most recent floods.