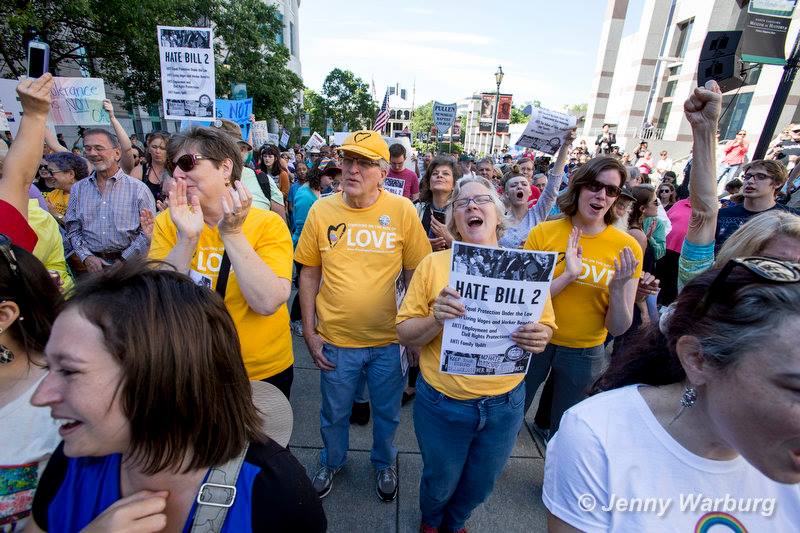 I LOST A COUPLE OF HOURS yesterday in front of my computer, watching North Carolina’s culture wars unfold in real time. The state legislature had convened a one-day “emergency” session with the explicit purpose of stripping local governments of the right to pass their own antidiscrimination measures. WRAL’s web site was live streaming the entire process, and the video feed was like meth for political junkies like me.

The target of yesterday’s session was LGBT—and particularly transgender—people, along with their allies in local governments. In February, Charlotte’s city council had passed an ordinance extending civil-rights protections to cover sexual orientation, gender identity, and family status. The measure applied to businesses that serve the public, including restaurants and taxi services. It also allowed residents and visitors to use restrooms corresponding to the gender with which they identify—a reflection of the contemporary understanding that for a trans person, using the bathroom of his or her original assigned sex can be both humiliating and potentially dangerous.

It was the restroom provision that riled some conservatives, who seemed to believe the ordinance would allow “deviant” men to sneak into women’s bathrooms with ill intent. Decrying the “folly of rogue city councils,” Representative Dan Bishop, a Charlotte Republican who is running for the state Senate, introduced House Bill 2, which limited the rights of local governments to protect their residents from discrimination. The bill also mandated that bathroom use in government buildings and public schools be determined by “biological sex.”

The bill, Bishop said in a statement, “will clarify that cities are not authorized to do radical social engineering as agents of the radical left.”

As I watched the bill zip through the legislative process—it was signed into law last night by Governor McCrory—I couldn’t help but think about an earlier Charlotte-area battle over morals and sexuality. Back then, the roles were different: local officials weren’t protecting their LGBT constituents but rather targeting them for scorn.

IN NOVEMBER 1996, VOTERS IN Mecklenburg County, which includes Charlotte, elected five moral-issue traditionalists to their nine-member Board of Commissioners. The Gang of Five, as they were called, immediately took on Charlotte Repertory Theater, which had recently staged Tony Kushner’s Angels in America, a Pulitzer-winning two-part production about the AIDS epidemic and its impact on gay men.

Angels in America piqued Charlotte’s Religious Right. “This is a play filled with vulgarity, filled with explicit scenes, filled with unsafe sex,” said the Rev. Joseph Chambers, a Pentecostal minister and founder of Concerned Charlotteans, who had not actually seen or read the whole play. Chambers found allies in the Gang of Five, who in 1997 voted to strip the theater of the entire $2.5 million it received from the county.

“The homosexual agenda is part of a broad cultural transformation which seeks to make Charlotte the Sodom and Gomorrah capital of the east coast,” wrote Hoyle Martin, the only Democratic member of the Gang of Five. When I interviewed him at the time, he explained that gay people tried to “seduce and have sex with young children” in order to replenish their numbers. He also told The Charlotte Observer, “If I had my way, we’d shove these people off the face of the earth.”

His colleague Bill James, a Republican, took a more personal tack, calling Charlotte Repertory producer and managing director Keith Martin both gay and a “flaming liberal for the avant-garde.” The theater official was, in fact, married to a woman. (James is still a commissioner and still uses coarse language. On Twitter yesterday, he referred to Charlotte’s measure as the “Tranny bathroom ordinance.”)

One might suppose that the rhetoric would have cooled down since the nineties. This is a new generation, after all, and the legal and social gains have been significant. Same-sex couples can now marry. Lesbian and gay Americans can serve in the military. There are gay and lesbian mayors,transgender judges, and role models on television and in the business world. Conservative politicians elsewhere have tamped down their homo- and transphobic rhetoric, knowing it’s not a winning strategy—and maybe no longer believing it themselves.

But yesterday’s hearings were a distinct throwback. While transgender witnesses shared real-life experiences—software engineer Madeline Goss described being “bullied and tortured” in men’s rooms as a youngster—their opponents turned to religious dogma and counterfactual fears.

“Charlotte’s bathroom ordinance allows men complete access to private places reserved for women,” Chloe Jefferson, a junior at Greenville Christian Academy, incorrectly told the House Judiciary IV Committee. “Changing in front of my girl peers is already intimidating enough. … Girls like me should never be forced to undress or shower in the presence of boys.”

Ten minutes later came a soaring sermon by John Amanchukwu, executive director of Raleigh’s Upper Line Christian Academy. “When there’s no such thing as right and wrong, man is left with flawed ideologies and philosophies,” said the former N.C. State football player, a formidable presence at six feet six and 280 pounds. “When virtues are smothered through party platforms, man becomes confident in legalizing anarchy. This ordinance is the corrupt fruit of treason. It is an inside job of the hearts of traitors.”

“How do you spell traitor?” Amanchukwu continued. “How do you spell treason? Today you spell it R-O-Y C-O-O-P-E-R.” (Cooper, the state attorney general and Democratic gubernatorial candidate, opposed House Bill 2.) He ended by quoting Genesis and calling Charlotte’s ordinance “a passive form of child abuse.”

THESE WERE THE TYPES OF WORDS we also heard in Charlotte in 1997. But the truth is that, until I checked my notes, I couldn’t recall the exact language used to target gays and lesbians in Mecklenburg County. What I did remember distinctly, though, was the response that came from one courageous business leader.

Joe Martin was an executive at NationsBank, which was undergoing a merger and about to become Bank of America. He was a prominent Charlottean and the brother of former North Carolina governor Jim Martin. He was an elder in his Presbyterian church. And he had been suffering from Lou Gehrig’s Disease for three years—longer than his doctors had predicted he’d live after his diagnosis.

In April 1997, in front of seven hundred of his neighbors, Martin stood before the commissioners and spoke like a man whose values were crystallized by his reckoning with mortality. “Hear me: I am afraid of you,” he told the officials. “My family has been down this path, with governments of moral arrogance before. The English burned us out of our thatched roof cottages because we refused to obey their king or their Bible. The French burned our bodies at the stake because our religious beliefs were in conflict with the official interpretation of the Bible. And then we formed a government that allowed us to burn the skin of human beings with hot branding irons to make them our property—and our government found justification for that in the Bible. So you may hide behind the Bible if you like, but I know you. I have seen you before.”

The end of Martin’s speech could have been delivered in 2016, with the word Charlotte removed and Raleigh substituted in its place.

“It is the smell of government rotting in the abuse of its power, all in the name of religion.”