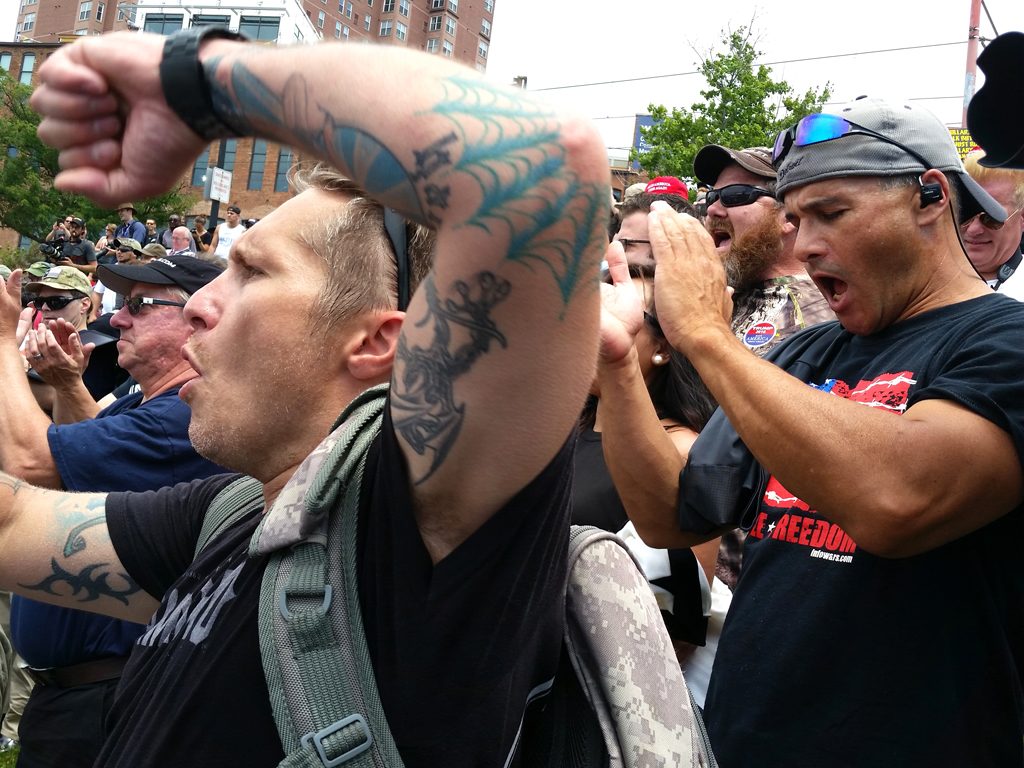 ALEX JONES, PRESUMABLY, ISN’T USED TO LOSING control of the stage. The syndicated radio host, dubbed “the most prolific conspiracy theorist in contemporary America” by the Southern Poverty Law Center, has a gift for energizing crowds. Before he spoke a single word at Monday’s America First Unity Rally—an unofficial Donald Trump lovefest on the first day of the Republican National Convention—the several hundred people spread loosely across Cleveland’s Settlers Landing Park were on their feet, pumping their fists, and packing considerably tighter than they had been moments earlier.

The crowd was solidly anti-Clinton—the most popular T-shirt read, “Hillary for Prison 2016.” They were equally anti-McCain, anti-Bush, anti-Romney, anti-any-Republican perceived as a compromiser. Jones’s job was to stoke the bikers and evangelicals and gun owners and “illegal alien” haters who had gathered on the riverfront: newly energized voters who had carried Trump to the edge of the GOP nomination. Jones—a professional anger artist who has called 9/11 an inside job and suggested that the man who shot Congresswoman Gabrielle Giffords suffered from a government “mind-control operation”—was the perfect messenger to offer Trump as the redeemer for a world gone mad. He shouted his entire speech within an inch of his throat’s capacity.

“As the globalists try to implement their world government, it is dead on arrival!” Jones declared, pausing for whoops and applause. “People are finding out foreign, multinational, anti-free-market corporations that are funding gun control here domestically and open borders—these are the people are conquering us. And once we force this into the consciousness, it’s over.”

“We’re coming for George Soros!” a man called from the audience, referring to the pro-democracy philanthropist who survived the Nazi occupation of Hungary. “We’re coming for him!” another responded.

Jones piled onto his own plotline. “Hillary is a foreign agent of the communist Chinese, the Saudi Arabians, and others. No news carried that because it was absolute truth and would destroy her. But it doesn’t matter. We got the info out. You got the info out.” But, Jones warned, there are people stifling the truth—by trying, for example, to restrict where he could fly airplanes towing anti-Clinton banners during the national party conventions. “These are not liberals,” he said. “These are anti-free speech, anti-freedom scum who need to get their ass to North Korea.”

If the inside of the RNC was choreographed for the conservative mainstream—tapping into primal fears of immigrants, refugees, and left-wing activists, but stopping shy of the most inflammatory rhetoric—the America First Unity Rally offered the Trump message raw and unplugged. It was a seamless message, until Jones spotted a lanky mixed-race man in an ill-fitting gray suit being shoved by some of his supporters. “Hey, let’s bring the Daily Show guy up here!” Jones said. “Just bring the agitator in here.”

Except it wasn’t “the Daily Show guy”—it was comedian Eric Andre, primed for a punking.
“They kept pushing me,” Andre said, climbing onto the stage. “But I just wanted to sign up for the open mic.”

“I want you to have sex with my wife,” Andre replied. His amplified voice carried across the park.

Jones seemed unnerved. “So, just trying to be shocking.”

“Not at all,” Andre replied, reaching into his pocket. “Here’s my hotel key. I want you to have sex with my wife.”

“Sir, I know you’re trying to be shocking …”

“I’m super into Trump,” Andre said, then broke into a growl. “Trump all day, baby! Right? Trump, bay-beeee!” Jones started to say something, but Andre interrupted: “Why does my pee-pee come out yellow?”

“This is an agitator who doesn’t even want us to even have speech,” Jones told his fans. “He wants to shut down our speech.” The radio host pivoted back to Andre. “You talk about sex. Talk about pee-pee. That’s not fair. We have children …”

“Well, I’ve exposed all that,” Jones said. “You said something legitimate.” 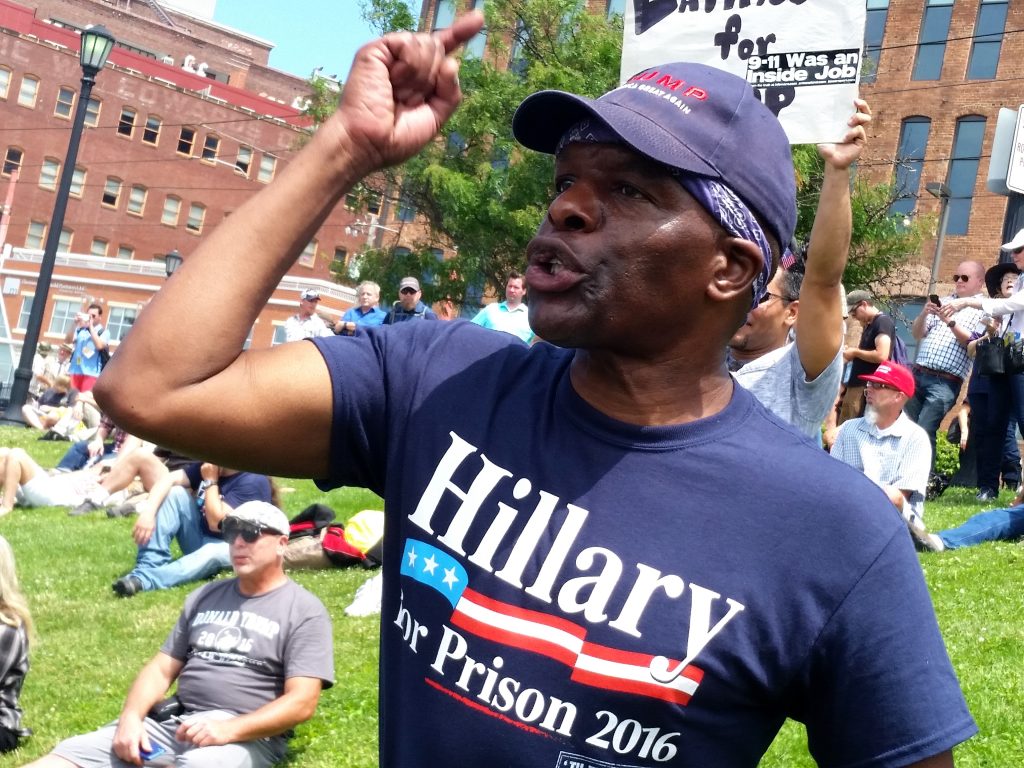 Kenneth Lane sports the most popular T-shirt of the day.

UNHINGED AS THE MOMENT WAS, it seemed oddly in keeping with the rest of the rally. One of the other popular speakers was Kelli Ward, a former Arizona state legislator who is challenging U.S. Senator John McCain in the Republican primary.

“Everyone here knows that guy John McCain …” (Boo!) “The ultimate establishment insider. The incumbent of all incumbents. The champion of compromise. The maverick of mediocrity. That is John McCain.”

“He supported ISIS!” shouted Kenneth Lane, a New Yorker wearing one of those “Hillary for Prison” T-shirts.

“I’m getting to that,” Ward responded, before accusing McCain and his “minions” of “stabbing me in the back” with political ads.

“Who wants to keep America safe?” the candidate asked.  “Who wouldn’t?” responded Lane, the New Yorker.

Ward: “And you know how we do that? We secure the border. We built the wall.”

Lane: “We get Trump in there!”

Ward: “I, for one, am ready to mix the mortar to fix the border!” 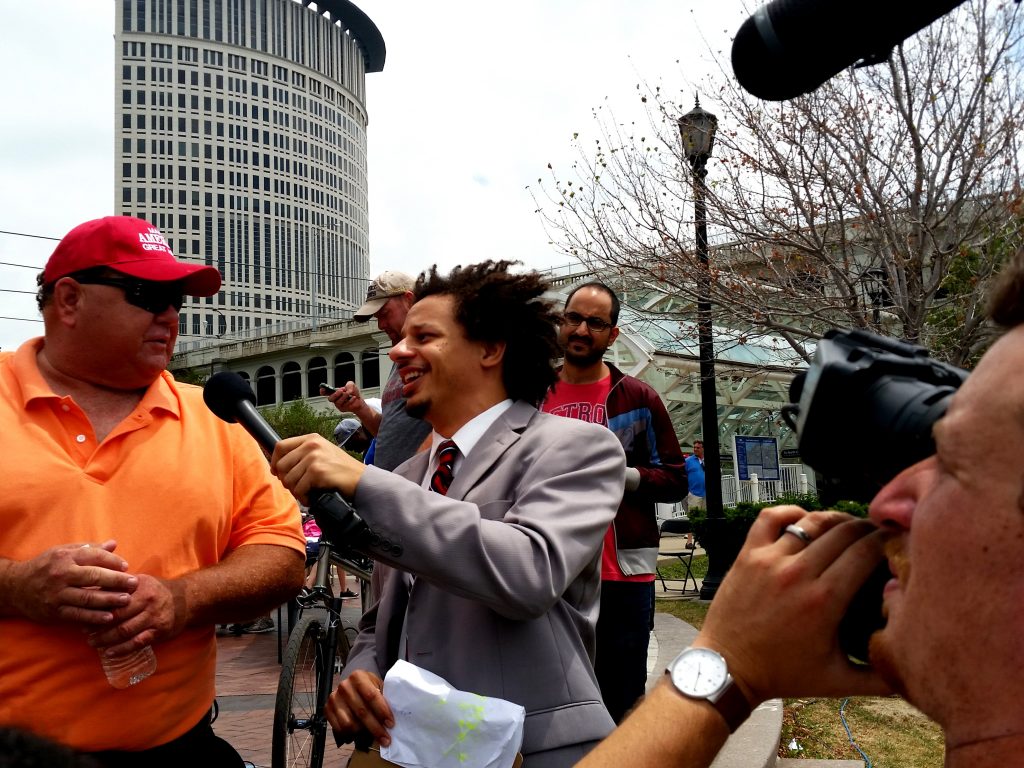 Eric Andre turns the microphone on an unsuspecting Trump supporter.

I WANDERED TO THE EDGE OF THE PARK, where various groups had set up tables. Manning one of them was Tom Ertl, a homebuilder from Tallahassee, Florida, and national media director of Christians for Donald Trump. Ertl told me that the “evangelical rank and file” has been “starving” for “an America-first nationalist” like Trump—and also starving for a candidate with Trump’s masculinity.

“Trump has got tremendous character qualities of what a man is intended to be—and how God created men to be,” Ertl told me. “He’s got the ability to stand alone when everybody’s against him. He doesn’t care about the pressure of the press. He will not waver when he takes a stand. He will not buckle down. And, when attacked, he will attack back. I look as a Christian: that’s a virtue and a leader, that he doesn’t cower.

“Trump’s boldness, his courage: all of these things are what men are created to be like. But, the issue is, for two generations, men have been feminized. And men have gotten soft. And Trump comes on the scene and he offends so many because he’s so alpha male. But alpha male is part of our Christian heritage.”

I left Settlers Landing before author and political operative Roger Stone arrived at the rally and implicated Hillary Clinton in the 1993 death of Deputy White House Counsel Vince Foster. As I hopped on the train, Eric Andre, the comedian, was wandering around the park, entourage in tow, sticking a microphone in random faces and asking, “How many times do you think I’m going to be called the N-word today?”