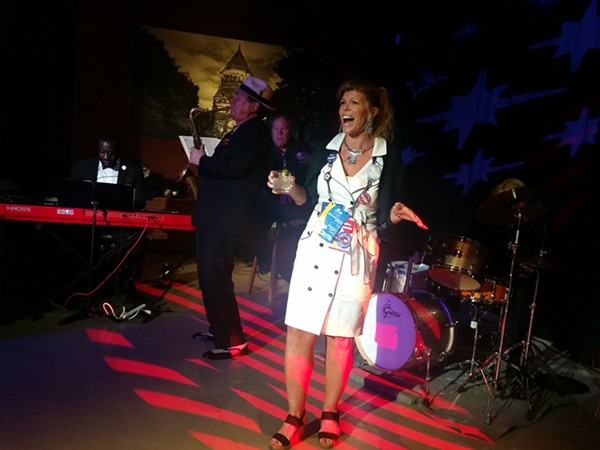 Kim Coley, a convention guest from Raleigh, at the McClatchy event. Photo by Barry Yeoman.

LIKE EVERY DAY AT THE REPUBLICAN National Convention, this afternoon members of the North Carolina delegation are eating and drinking well. The social schedule is so heavy that state party director Dallas Woodhouse called it “the Bataan death march.”

And all sponsored by the liberal media.

Today’s multi-delegation party is underwritten by McClatchy, the newspaper chain that owns both Raleigh’s News & Observer and The Charlotte Observer. What’s striking about this, of course, is that the state’s two major dailies have been the subject of numerous punchlines at North Carolina delegation meetings.

“How many of you believe The News & Observer and The Charlotte Observer?” U.S. Senator Thom Tillis asked delegates at yesterday’s breakfast meeting. Exactly zero hands went up.

Then, this morning, Woodhouse urged the delegation to attend today’s shindig. “You need to eat and drink them out of publication,” he said.

This mirrors the tone at the convention itself, which suggests the “mainstream media” is conspiring to twist or paper over the truth. “To all my friends, they’re way up there I the press, I see you,” conservative radio and TV host Laura Ingraham said in last night’s speech. “You all know, in your heart, why Donald Trump won the Republican nomination. You know it. Because he dared to call out the phonies, the frauds, and the corruption that has gone unexposed and uncovered for too long. Do your job.”

Later, Senator Ted Cruz said, “[Republicans] passed the Civil Rights Act and fought to eliminate Jim Crow laws,” in last night’s speech. “That’s our collective legacy, although the media will never share it with you.”

So what gives with the McClatchy party?

Woodhouse, himself a former TV reporter, told me that some delegates refused to come to an event sponsored by the newspaper company, believing that “Republican have a hard time getting a fair shake. … That’s their right.” He added that—even though journalism tends to attract liberals—the two North Carolina McClatchy papers have covered the convention fairly.

“I have always lived by a couple of principles in politics,” Woodhouse said. “Number one: you don’t let politics get in the way of food. Number two: [a gathering like this] is an opportunity to get to know each other. Sometimes the newspaper can’t understand why Republicans do what they do.”

Then he retired outside for a smoke. Inside, a server made the rounds, saying, “Welcome to Cleveland. Would anyone care for a glass of wine?” Another made sure the dessert table was continuously replenished.