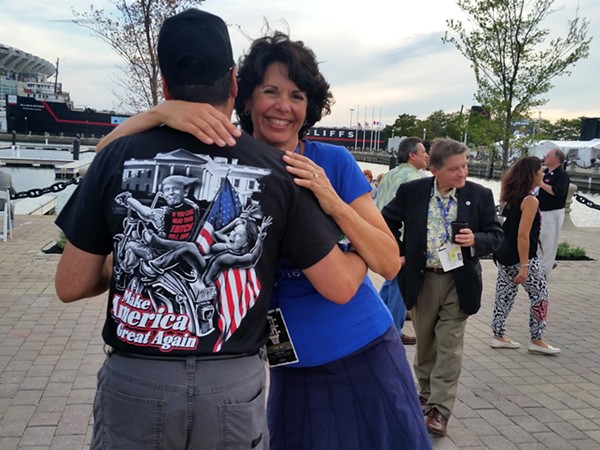 ON THE EVE OF THE REPUBLICAN National Convention, the Cleveland 2016 Host Committee threw a welcoming party for several thousand delegates and guests. It was held at the North Coast Harbor, a recreation area—closed to the public for the evening and heavily secured—between downtown and Lake Erie. The Rock and Roll Hall of Fame threw open its doors, and local businesses supplied an abundance of shrimp ceviche, smoked lake perch, and beer. Delegates danced to a live performance by Three Dog Night of the anti-racism anthem “Black and White.” A waxing moon rose over the skyline. There were stilt walkers and a trash-can drum corps and—was that Stephen Colbert? Why, yes it was.

The star attraction, though, was not Colbert or Three Dog Night, but rather Lake Erie itself, shimmering blue-gold, and later pink, under a setting sun, its fingers creeping past the Steamship William G. Mather to the edge of the Hall of Fame. The party was just out of sight from where the Cuyahoga River flows into the lake, a mile to the southwest.

The Cuyahoga is most famous, of course, for catching fire in June 1969 and helping awaken the nation to the dangers of unchecked industrial pollution. By then the river “was no longer the vital freshwater artery nourishing Lake Erie that nature designed it to be,” wrote journalist Dan Egan in the Milwaukee Journal Sentinel two years ago. It was a repository, instead, for “everything from floating cow carcasses to acetylene tanks. … It had become Cleveland’s colon, and the lake was a toilet.”

Time published a photo of the river in flames, but failed to mention that the picture was taken during a more dramatic fire in 1952. Johnny Carson told jokes with burning-river punchlines. The images and comic monologues had their effect: Along with the 1969 Santa Barbara oil spill and Rachel Carson’s 1962 book Silent Spring, the Cuyahoga fire helped stoke the modern environmental movement. President Richard Nixon, a Republican, created the Environmental Protection Agency in 1970, shortly after he signed the National Environmental Policy Act. Two years later, Congress passed the Clean Water Act.

“Clean air is not free, and neither is clean water,” Nixon said in his 1970 State of the Union address. “The price tag on pollution control is high. Through our years of past carelessness we incurred a debt to nature, and now that debt is being called.”

Nixon was no chlorophyll-bleeding radical; the Clean Water Act passed over his veto, and he privately complained to automobile executives about environmentalists who wanted to “go back and live like a bunch of damned animals.” But he did respond to the growing public demand for action.

I thought of this history as I stood in line for a vegan slider from the Betty’s Bomb Ass Burgers food truck (not the most popular offering among delegates). In front of me stood a man wearing a vintage button with Nixon’s face and the words, “Now More Than Ever.” He turned out to be a Republican Party activist from Zionsville, Indiana, named Jim Kirkpatrick, attending the convention with his delegate sister.

“Nixon had a great legacy as a conservationist,” Kirkpatrick told me—but added that, more than four decades after the EPA’s creation, he wasn’t so sweet on the agency. “Too many regulations,” he said. “Government can do some good things, but there’s so many times it overreaches. You know the saying? The path to Hades is paved with good intentions.”

That was the upshot of several short conversations I had at the welcoming party: environmental stewardship is important, but only up to a point. This squares with the 2012 GOP platform, which has a section called Reining in the EPA: “Since 2009, the EPA has moved forward with expansive regulations that will impose tens of billions of dollars in new costs on American businesses and consumers. Many of these new rules are creating regulatory uncertainty, preventing new projects from going forward, discouraging new investment, and stifling job creation.”

“Everyone is for clean water. Clean water is good,” Jason Lemons, an affable Trump delegate and pharmaceutical consultant from Fuquay-Varina, told me at the welcome party. “The Clean Water Act was so restrictive it made it almost impossible for businesses to survive.” He talked about bureaucracy, inconsistent fines, and dual penalties from federal and state enforcers. And he cited Alcoa, which this month sold four North Carolina dams that once powered an aluminum smelter on the Yadkin River. That smelter, which has since closed, was linked to pollutants like cyanide and PCBs, although Alcoa disputed its culpability.

I didn’t want to detain Lemons for long; after all, this was a party. “Now it’s time for a snack,” he said, then made a recommendation: “The sushi over there—really worth the line.”

Before I could find the sushi, I fell in behind a couple holding hands. I couldn’t stop staring at the back of the husband’s T-shirt. It had an illustration of Donald Trump looking backward from the helm of a motorcycle. The cartoonish Trump smiled as a wide-eyed Hillary Clinton tumbled off the back of the bike. “If you can read this,” Trump’s muscle shirt said, “the bitch fell off.”

The couple asked me to take their picture, and introduced themselves as Ben and Laura Soussan. They run a small IT services company in Hampton, New Hampshire, and are attending the GOP convention as guests. We talked about the beauty of the lake, and I mentioned Nixon’s environmental legacy.

“I’m a conservative with a heart,” Laura told me. “What are we going to do, come to earth and trash it?” People like her “care about the environment,” she explained, “but not in such a radical way that you have extremist action.”

What does extremist mean? I asked. 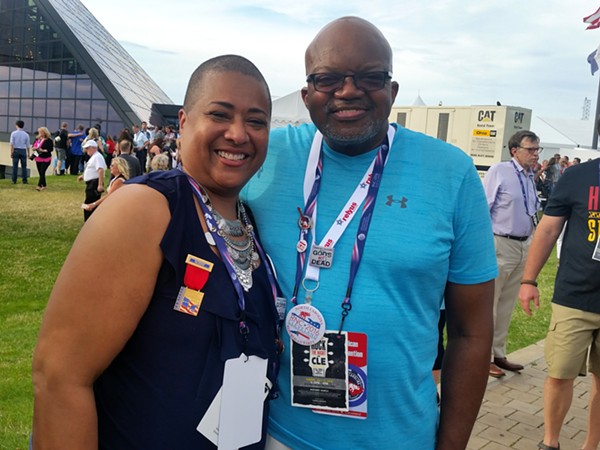 Miriam and Norris Aikens: “God told us to have dominion.”

It’s not often that I find myself wrapped in a hug at a national Republican gathering. But then I ran into Miriam Aikens, a minister from Reidsville, north of Greensboro, whom I interviewed in 2012. This year she’s back as an alternate delegate supporting Senator Ted Cruz. We spotted each other on high ground with a particularly nice view of the lake. I asked her about environmental regulation in the 1960s and now.

“All the agencies now—even those that were good—have shifted a bit to liberal thinking,” she said.

Meaning what? I asked.

“Just like Al Gore’s theory that the earth is going to burn up and the icebergs are going to melt—I don’t think the climate change theory is accurate at all. God created the heavens and the earth, and God told us to have dominion and subdue it.”

Her husband and co-pastor, Norris, jumped in. “There will be an end to the earth,” he said. “But God’s gonna do it. Man’s not.”