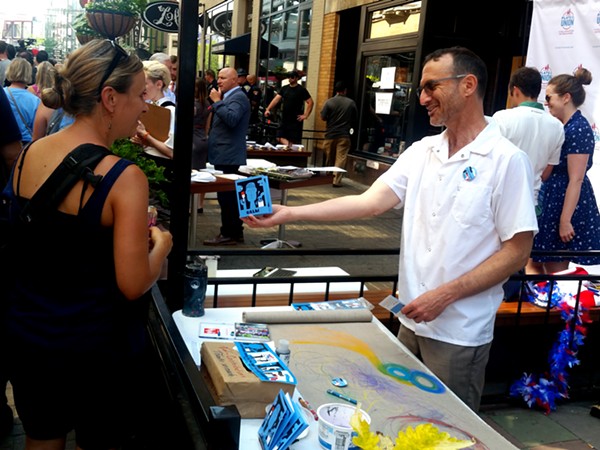 “If we’re too upset, we can’t have a conversation,” says artist and psychotherapist Andrew Purchin. Photo by Barry Yeoman.

IF THERE’S A CARNIVALESQUE CENTER to downtown Cleveland this week, it’s the five hundred feet of East Fourth Street leading to the Republican National Convention’s perimeter fence. The narrow brick street is thick with delegates, journalists, musicians, souvenir vendors, obscure-issue protesters, and police officers imported from around the country. MSNBC has set up two makeshift outdoor studios. Zoltan Istvan, a presidential write-in candidate with the Transhumanist Party, carries an orange banner depicting his own face. Two stone-faced men hand out slender books titled Sharia: The Threat to America. A Donald Trump impersonator works the crowd. Members of the activist group Code Pink toss around tennis balls in protest of security restrictions that ban balls and canned goods, but not firearms, near the convention site.

On one end of the block, a vendor selling right-wing parodies of Dr. Seuss books (“The Gorax by Dr. Truth”) shouts, “Socialism sucks! We love the Cleveland police!”

Across the street, a guy with a bowl haircut and an Architects & Engineers for 9/11 Truth T-shirt calls out: “9/11: Israel did it.”

Dr. Truth responds, “Oh, you, anti-Semitic!” And then comes a procession of evangelists carrying placards that say, “Ye Must Be Born Again” and “Beware of False Prophets.”

Amidst the cacophony, in front of a craft cocktail bar, there’s a tiny zone of calm. At its center stands a fifty-four-year-old artist and psychotherapist named Andrew Purchin. “Take a break,” he says to passersby. “Get calm. Get curious. Relax with some art supplies.”

Purchin has traveled from Santa Cruz, California, to Cleveland—he’ll also be at next week’s Democratic convention in Philadelphia—with a project called “The Curious End to the War Against Ourselves.” He’s brought with him 144 linear feet of linen fabric that will be assembled into a scroll and exhibited with a video installation. And he’s inviting anyone who needs a respite from the partisan hubbub to pause for a “guided art-making meditation.”

“Close your eyes and take some deep soothing breaths,” he tells a young man with a punky haircut and paisley shirt cuffs, who just finished an interview with a television reporter. The man holds a blue crayon and faces a small upright segment of the scroll, open like a Torah.

Next door, a country singer in a leather vest croons, “Donald Trump can make us great again.”

“Let your body become the crayon by holding your hand, wrists, and arms steady while using gravity to pivot on your feet,” Purchin says to the man in paisley. “Pivoting forward, backward, sideways, just feeling yourself here on this planet. Sometimes it makes sense to be more percussive and sometimes more smooth, to express however you’re feeling. There could be a critical voice saying maybe you’re not doing good enough, or this is silly or child play. We want to invite all the parts of us here, so even your inner critic is invited.”