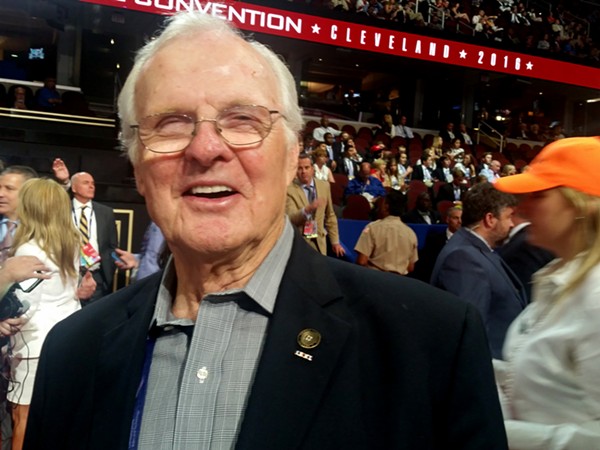 RONALD RABIN, A DONALD TRUMP DELEGATE from North Carolina, is tired of the GOP’s internal critics. He’s annoyed at the anti-Trump delegates who wanted to change the rules at the Republican National Convention so they could vote their consciences rather than being bound to candidates they might personally oppose. He has no patience for the ruckus they raised on the convention floor Monday afternoon, chanting and booing, when their effort to force a roll-call vote on the proposed rules was rebuffed.

“Malcontents,” he called them in a News & Observer interview. He accused Trump’s opponents of causing “a false vision of disunity, when in fact we’re very unified.”

The Republicans who have descended on Cleveland are anything but unified. The schism between those who adore Trump (or at least have made their peace with him) and those who consider him divisive and ideologically unpalatable is open and bitter. It surfaces at every official meeting, every social event, even in conversations among delegates on public transit.

Yet party leaders are pushing former Cruz, Rubio, and Kasich supporters to back the nominee, arguing that a 2016 win—regardless of the candidate—is critical to the GOP’s long-term health. At a North Carolina delegation breakfast yesterday, U.S. House Speaker Paul Ryan practically pleaded for delegates to get behind Trump this fall, just as they would get behind any North Carolina college team that made it to a national championship. (Ryan evidently doesn’t grasp the Duke-UNC rivalry.)

I wanted to understand why Trump supporters felt such an urgency about presenting a unified front. So after the breakfast, I sat down with Rabin in the lobby of the delegation’s hotel.

Rabin is an eighty-four-year-old state senator from Harnett County, south of Raleigh. He’s a decorated Vietnam vet who worked in the defense industry for thirty years. In the legislature, he’s been a culture warrior, comparing “political correctness” to Nazi book burnings and blaming “Jihadists,” rather than freely available weapons, for the Pulse nightclub massacre in Orlando. He was one of the first North Carolina state officials to endorse Trump. And he feels abandoned—literally abandoned this week—by mainstream GOP leaders, including some he has voted for in the past.

“The Bushes, [John] Kasich, any of the wannabe leaders of the Republican Party who did not show up at this convention put their own personal agenda before the United States of America,” he said. “They lack patriotism. They lack party enthusiasm. And they create the aura of disunity when I don’t think it exists at the level that the media portrays.”

I agreed with Rabin that the scarcity of mainstream GOP leaders here was striking. “It feels kind of unprecedented to have so many lions of the party stay away,” I said.

“Self-proclaimed lions of the party,” Rabin said, correcting me. “As far as I’m concerned, if they’re not here, they’re not part of the party. And I’ll tell them to their face every time.”

Rabin called Trump’s ascendancy “a political revolution. The lions of the party, to me, are the establishment against whom this revolution is aimed.” By not coming to Cleveland, “they’re telling me they don’t want to be part of the great America.”

This presumes, of course, that it’s incumbent on party stalwarts to embrace an insurgent candidate no matter how offensive they find his viewpoints, his business ethics, or his style. It presumes that dissent weakens us. Rabin talked about being a teenager during the Allies’ World War II victory and later realizing that America’s wartime strength was fueled by political conformity.

“National power is fully dependent on national will,” he said. “In World War II, there was no dissent. If you were a dissenter, you were ostracized. The entertainment was one hundred percent in the military or doing something for the war effort. There was none of this nonsense of ‘we shouldn’t do this’ or ‘we shouldn’t do that.’ You can’t fight a war any other way.”

By contrast, he said, the country is now divided—a condition he blames on the “secular progressive” ideology of Democrats like President Obama.

We need a president, Rabin insisted, who can bring us closer to the America he remembers from his childhood. “Of all the candidates,” he said, referring to the entire GOP primary field, “the one who has the best chance of bringing people closer together is Trump.”

This seemed to me like a tenuous argument for a candidate who is polling zero percent among African-American voters in the battleground states of Ohio and Pennsylvania. It seems a preposterous argument for someone whose rallies have erupted into violence and who has offered to pay the legal fees of those who assault protesters.

“Could I share with you what I’m hearing from those who don’t support Trump?” I asked Rabin. “They see Mr. Trump as divisive.” I mentioned the candidate’s statements about Mexican immigrants, Muslim refugees, and even women.

“He has no problem with Mexican immigrants as long as they’re legal,” Rabin said, then offered a more detailed accounting of the candidate’s views.

This wasn’t just about specific positions, I told Rabin. “Trump’s opponents have suggested that, even when they agree with the policies—I think most Republicans and Democrats support secure borders—a lot of what they’ve objected to is the tone, the rhetoric. Saying many Mexicans are rapists, for example.”

“The term ‘many’ is nebulous,” Rabin responded. He cited the three Monday night convention speakers whose children were killed by undocumented immigrants, one in a shooting and two in motor-vehicle accidents.

Thirty minutes into our conversation, the upshot of what I was hearing from Rabin was that the twenty-first century is too perilous to factor the suffering of non-Americans into our policy decisions. That’s true whether the issue is Mexican border security or the refugee crisis in countries like Syria.

“We have got to learn to live in this dangerous world,” he said. “We have to put it on a footing of national security, not national benevolence. You can afford to be benevolent when everything is cool in the world. You can’t afford it now.”