A bid by North Carolina’s GOP-controlled legislature to strip power from the state’s incoming Democratic governor has prompted another round of progressive protests and civil disobedience. 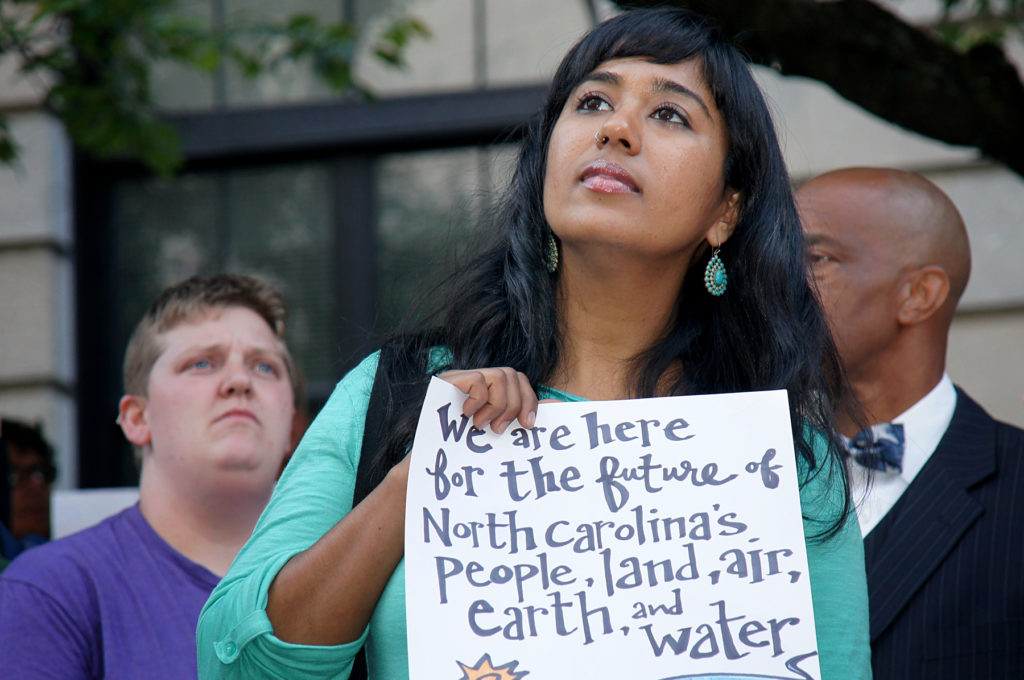 WHEN COMMUNITY EDUCATOR MANJU RAJENDRAN and her eight-month-old daughter arrived at the North Carolina Legislative Building in Raleigh on December 15, the House visitors’ gallery had just been cleared of spectators and the chamber was doing its work behind closed doors. Seventeen people had been arrested, most of them for interrupting a hastily called special session designed by Republicans to seize power from Democratic Governor-elect Roy Cooper and the new Democratic majority on the state Supreme Court. A reporter covering the session for the progressive NC Policy Watch news site had been arrested, too, for trying to cover the protests.

Rajendran walked into a tense scene. Some demonstrators were holding signs against the glass walls of the gallery, which overlooks the House floor from above. Others had their ears pressed to their phones, trying to listen to the House’s audio feed, which was breaking up and delayed. Activists talked among themselves about their frustrations with a Republican-controlled legislature that — after a few key GOP electoral losses — was trying to consolidate its power by rewriting the laws governing the executive and judicial branches.

The anti-democratic impulses of North Carolina’s lawmakers were familiar to Rajendran, who lives in Durham and works for a social-justice training cooperative. (She also helps run a family restaurant in Chapel Hill.) Since the GOP won control of both legislative chambers in 2010, it has gerrymandered its own district lines — illegally, says a federal court that last month ordered a prompt redrawing — and tried to restrict voting access for African Americans and young adults. In July, the U.S. Court of Appeals for the Fourth Circuit blocked most of the voting restrictions, on the grounds that they “target African Americans with almost surgical precision.”

Despite a GOP push to make voting more difficult, Cooper, the state’s attorney general, narrowly won the gubernatorial race against Republican incumbent Pat McCrory. And Mike Morgan won a nominally nonpartisan Supreme Court race, flipping the court’s balance toward the Democrats. In response, Republican lawmakers, who were in Raleigh to pass an aid package for victims of Hurricane Matthew, called an additional special session on the heels of the storm-relief session to claw back power from the Democrats.

One bill, which has since become law, dispenses with the long-standing practice of giving the governor’s party a one-vote majority on the state and county election boards. It instead gives those boards a 50-50 split, with the Republicans assuming the chairmanship during even-numbered years when state and federal elections take place. The same bill restores partisan labels to the state Supreme Court races and restructures the judicial process to shift power from the Democratic-majority Supreme Court to the Republican-majority Court of Appeals.

A second bill, which McCrory plans to sign, strips the governor’s powers over public education and the university system, transferring them to the state’s Republican schools chief and the legislature. It also allows the state Senate to confirm or veto Cooper’s cabinet picks and cuts the number of employees he can hire and fire from 1,200 to 425. Cooper has noted that the bills have real-world consequences in areas ranging from education policy to environmental protection.

“We’ve never seen this kind of hubris on the part of the legislators,” says Rajendran. “They took advantage of a session which gave much-needed hurricane relief to folks in the eastern part of the state, and they unrolled a plan to steal power from the governor [and judges] we elected. People didn’t even have a chance to understand what was being done to us, much less to voice our concern.”

In recent years, North Carolina has developed a counterweight to its legislative majority: the Moral Monday protest coalition, led by the state’s NAACP chapter, with support from a wide swath of religious and political organizations. Activists have staked their ground inside the Legislative Building, and risked arrest, since 2013, in response to lawmakers’ assaults on public education, social-welfare programs, voting rights, and other civil rights. Last week was no different: Hundreds filled the building, to the chagrin of GOP lawmakers. State Representative Michael Speciale, who chairs the House Committee on Homeland Security, Military, and Veterans Affairs, described the protesters on Facebook as “a group of malcontent thugs who are likely paid and bused in to disrupt the business of those who represent the people.” In fact, those who showed up did so on their own volition and represented a cross-section of races, ages, and ideologies.

“Fundamentally, the purpose of government is to pass laws to help people. That is not what happened,” says Mark Zachmann, a self-described “Republican one-percenter” who visited the legislature with his Chapel Hill neighbors. “They took advantage of the fact that they have a supermajority and they passed laws to help themselves. That is not why we have a government.”

THE FOLLOWING DAY, AS THE SPECIAL session continued, Rajendran returned to the Legislative Building with her daughter. She met up with her brother and sister-in-law, who also had a baby in tow. The two cousins said hello.

Outside the chambers, protesters were chanting. Rajendran, who has done community organizing for most of her 35 years, started singing the call portion of a call-and-response “We Shall Not Be Moved.” She noticed how protesters looked away from chant leaders to make it harder for police to identify them. Some wore blue tape over their mouths to symbolize the silencing of their voices.

When the Senate went into session, Rajendran and others filed into the visitors’ gallery. She was bouncing and breastfeeding her daughter during the debate over the bill that would diminish the governor’s influence over public education and the university system.

She was shaking, she would later recall, but her own voice carried her over her fears. Police officers approached her and she passed her daughter to a friend.

“Forward together,” she said aloud, starting a chant familiar to those who have attended Moral Monday events.

“Not one step back,” the crowd responded. 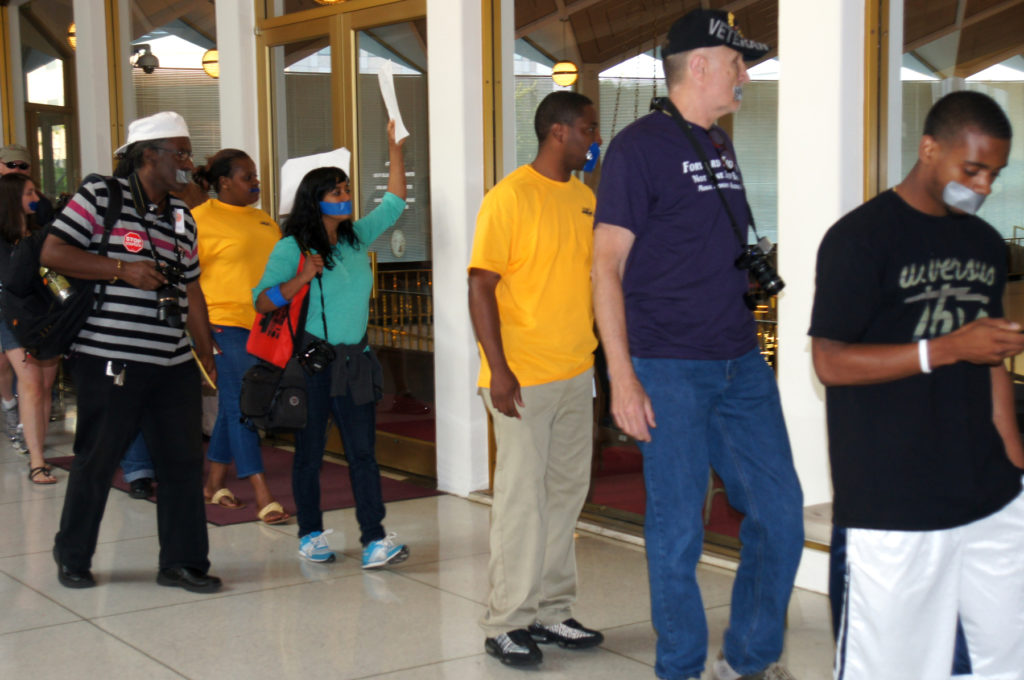 Manju Ranjendran and other activists tape their mouths shut to protest new decorum rules at the North Carolina legislature. Photo © 2019 by Phil Fonville.

Senate leaders emptied the visitors’ gallery. As Rajendran was led away in zip-tie handcuffs, she chanted all the way to the elevator. She sang en route to the jail, where she was held (though not in a cell) for about six hours. It was the longest she had ever been away from her daughter, whom her sister-in-law nursed in her absence. Rajendran was one of at least 39 people arrested that day.

Republican officials have defended the legislature’s actions as the inevitable partisan tussling that takes place no matter who’s in charge. “This is what happens when you have divided power in a state that, since King George’s time, loathes executive power,” the state GOP’s executive director, Dallas Woodhouse, said Friday on Meet the Press. “Wrong is always in the eye of the beholder of whose ox is getting gored.” Woodhouse noted that “just a few years ago, the Democrat legislature stripped the lieutenant governor of every power they had.” He was referring to Jim Gardner, who was denied the right to preside over the Senate in 1989.

Even some prominent Republicans — including former Governor Jim Martin and longtime strategist Carter Wrenn — have criticized their party for its excesses. “I thought the Republicans played right into the image of the nasty politician,” Wrenn, who was closely linked to the late U.S. Senator Jesse Helms, told a reporter for television station WRAL.

North Carolina could become a model for how national Republicans consolidate power. If that happens, Rajendran says she hopes it also becomes a model for how activists respond.

“I hope people are talking about North Carolina all over the country,” she says. “With Trump coming to power, we can expect the terrain to become much more treacherous for democracy. I’m glad to know we’re going to fight back.”