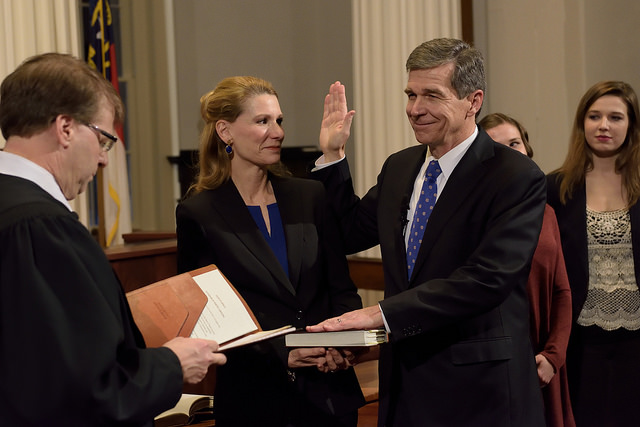 Roy Cooper at his swearing-in. As a young legislator, he voted against one-party rule. Photo courtesy of Cooper; in the public domain.

ONE OF THE MOST SURREAL moments during last week’s fracas at the North Carolina legislature came during a news conference called by the state NAACP. The civil rights organization was blasting the Republican legislative majority for its brazen efforts to strip authority from the incoming Democratic governor, Roy Cooper, and a state Supreme Court that tilted Democratic in last month’s elections.

From the back of the room came the voice of an uninvited guest: Dallas Woodhouse, executive director of the state Republican Party. “I’m just wondering,” Woodhouse said, as others tried to shush him, “what about when Jim Hunt tried to fire all the Republicans in the Christmas massacre? . . . What about the Democrats stripping the lieutenant governor, a Republican, of all his power? Was that right?”

Woodhouse had a point: North Carolina’s Democrats have hardly been strangers to the rough-and-tumble of governance. After Hunt was elected governor in 1976, he demanded the resignation of 169 policymakers hired during the previous Republican administration and fired those who didn’t comply. (That was the “massacre.”) Then in 1989, after Republican Jim Gardner took office as lieutenant governor, Senate Democrats denied him the right to lead their chamber.

Last week, as Republican lawmakers passed a wholesale shift in the state’s balance of political power — during a special session called without public notice — they justified it with various refrains of they-did-it-first. “History matters,” Woodhouse said in a statement.

Indeed, it does. That’s why it’s worthwhile to recall how Democrats ran the legislature during Woodhouse’s adolescence and why politicians of both parties worked together to bring that roughshod rule to an end.

I became a statehouse reporter in Raleigh in 1986, in an era when the North Carolina budget was assembled in secret by eight legislators, all of them white Democratic men. Informally they were called the “Gang of Eight,” or the “super-subcommittee” — “supersub” for short.

Because it wasn’t a formal body, the supersub could meet without the constraints of the state’s open-meetings law. Once its budget was released — sometimes larded with favors for friends of the eight — it flew through the approval process with little time for study, much less debate. Lawmakers knew that defiance would cost them both plum assignments and pork-barrel funds for their districts. Democratic dissenters might also find their own bills bottled up permanently in committee. Republicans had less to lose; they were disregarded entirely.

“To get along, you have to go along,” Democratic lawmaker J. Ray Sparrow told me during the first session I covered. “There have been some definite threats.”

By then, there was already a movement afoot for more open, less vindictive government. Bumper stickers saying “Sink the Supersub! Vote Republican” began showing up around North Carolina. GOP lawmaker Coy Privette declared that if politicians in his county “operated as the Gang of Eight does, they’d be indicted and be put in jail.” In a symbolic showdown, a group of House members from both parties voted for a tax-reform measure that Democratic leaders opposed. Few people cared about the tax issue; this was a protest against autocracy.

Then, in 1989 — the same year Senate Democrats defanged the incoming lieutenant governor — something entirely different happened in the House. Twenty Democrats teamed up with Republicans to oust Democratic Speaker Liston Ramsey. (Among the Democrats was Cooper, now the governor-elect.) It was a rare moment of substantive bipartisanship: a declaration that the hoarding of power is incompatible with democracy. “The people of North Carolina were voting for two parties,” Alex Warner, a Democratic House member, said at the time. “That meant representation for all.”

Since then, the best of North Carolina’s legislative leaders, though not all, have presided over its chambers with an eye toward good government. But last week’s session was a reversion to the strong-arm rule that Republicans decried in the 1980s. The sweep of the power seizure is spectacular: a weakening of the governor’s control over the state and county election boards; a slashing of his hiring and firing powers; a Senate veto over his Cabinet picks; the transfer of authority over public education and the university system to agencies controlled by Republicans; a shift from nonpartisan to partisan Supreme Court elections; and a judicial restructuring that favors the Republican-leaning Court of Appeals over the Democratic-leaning Supreme Court.

These measures are more blatant than the abuses that provoked calls for more inclusive governance 30 years ago. It’s no surprise that old-timers including former GOP governor Jim Martin have scolded their party for going too far: History matters, and the Republicans of the 1980s wouldn’t recognize their 21st-century successors.