At ground zero in the fight over LGBTQ rights, a special legislative session to repeal the state’s House Bill 2 devolved into name-calling and hostile stalemate. 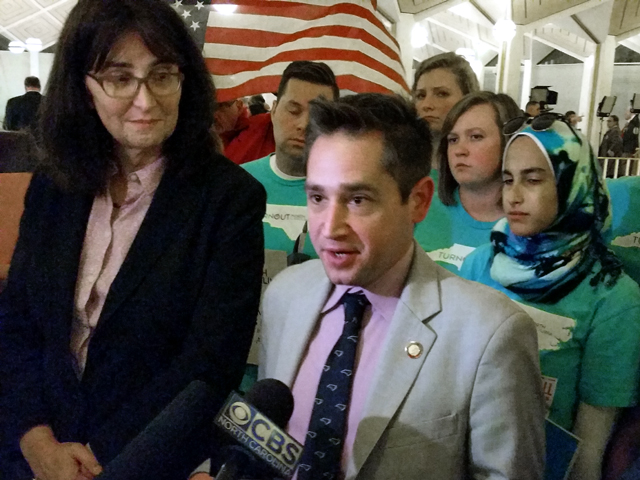 State Representative Chris Sgro, who is openly gay, speaks to the media after an HB 2 repeal attempt fails. Mara Keisling of the National Center for Transgender Equality looks on. Photos by Barry Yeoman

DURING THE LONGEST NIGHT of the year—after what had felt like the longest day—North Carolina Governor-elect Roy Cooper walked into a Raleigh news conference and made no effort to hide his anger. The Democrat had helped broker a deal for the repeal of House Bill 2, the anti-LGBTQ, anti-labor legislation that had cost the state jobs, championship games, and convention business. Leaders of both political parties had signed off on the agreement. So had advocates for business, athletic, and LGBTQ interests. The Charlotte City Council, whose protections for transgender residents had originally sparked HB2, had agreed to rescind the anti-bias ordinance it had passed last February. Outgoing Governor Pat McCrory, a Republican, had called the legislature into a December 21 special session.

It seemed like the productive, if imperfect, breaking of a logjam.

Then, after nine hours of wrangling, mostly behind closed doors, the legislature had adjourned its session without debating, much less passing, a full repeal of the bill.

As a result, transgender visitors to public buildings will continue to be forced into the restrooms corresponding to their birth certificates, at the risk of harassment and sexual assault. Cities and counties will still be prevented from outlawing discrimination. They will also still be barred from imposing wage and other employment rules on their contractors. The boycotts that have cost North Carolina hundreds of millions of dollars will continue.

“Today the legislature had a chance to the right thing for North Carolina, and they failed,” Cooper said at a 9 p.m. press briefing on Wednesday night, his jaw tight. “I’m disappointed that we have yet to remove the stain on the reputation of our great state that is around this country and around the world.”

THE DAY OF THE SPECIAL SESSION started off badly. The City Council had upheld its end of the deal, reluctantly rescinding its civil-rights ordinance, which (among other things) required businesses to allow transgender people to use restrooms consistent with their gender identities, regardless what appears on their birth certificates. But the rescission had come incrementally through the week, and wasn’t completed until that morning. Republican legislators claimed that Charlotte was playing games by waiting until the 11th hour. “There is a huge problem we have with trust,” Senate President Pro Tempore Phil Berger explained to reporters.

Moreover, some GOP hardliners had no interest in compromising on what has become a hot-button civil-rights issue. Some claimed, with no factual basis, that giving transgender people full restroom access would increase the likelihood of sexual attacks. “Many members were convinced of the merits of House Bill 2,” House Speaker Pro Tempore Paul Stam told me curtly.

Those tensions broke out as soon as the House convened. One representative moved for adjournment; he was ruled out of order. Another, Jeff Collins, said he would oppose every vote, including the rules governing the House, because he believed the entire day was “unconstitutional.” The state constitution allows special sessions under “extraordinary” circumstances, and Collins insisted the repeal of HB2 didn’t qualify. “The only thing extraordinary thing that has happened,” he said, “is we had the extraordinary hubris of [Charlotte] City Council.” (Collins did not oppose the rules when the legislature convened last week to strip Cooper of many of his powers.) 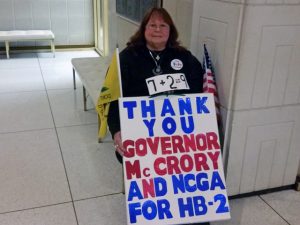 From there, the day dissolved into an interminable series of brief public sessions and long recesses for closed-door party caucuses. Although Cooper later said there were enough votes to repeal House Bill 2, Republicans were sufficiently divided that their leaders never offered them a chance to vote on a full repeal.

Instead, Berger offered a watered-down version of the measure: a repeal that would be contingent on a six-month moratorium during which cities and counties would be prohibited from regulating discrimination, employment practices, or restroom access. Berger described it as “cooling-off period” that “gives everyone an opportunity to start over.” Other Republicans said they wanted to prevent other cities from passing the exact same ordinance that Charlotte had rescinded.

Democrats pointed out that a moratorium would accomplish the same goals as House Bill 2, just with different language. “It’s HB2.2,” said Democratic Representative Chris Sgro, who is openly gay. “It does nothing to open North Carolina for business.”

What’s more, Democrats said, all parties had agreed to a clean repeal of House Bill 2 once Charlotte rescinded its own ordinance. “This wasn’t the deal,” Senator Jeff Jackson, a Democrat from Charlotte, told his colleagues during a debate over Berger’s bill. “Charlotte would not have repealed its ordinance if this had been the deal. Charlotte acted in good faith”—at this point, Republican senators began jeering—“that we would keep our end of the bargain, and it looks like you’re not going to. [The] city met you halfway, only to have you give it one last shove.”

By then, all decorum had broken down on the Senate floor.

Senator Floyd McKissick, Jr., a Democrat who is African American and whose family has deep roots in the civil-rights movement, stood to explain the historic role that North Carolina cities have played in safeguarding minority rights. “You might say, what relevance does that have to this?” he said. “I can remember a time when the city of Durham, the city of Asheville, passed anti-discrimination ordinances so that people that looked like me didn’t have to worry about … what restrooms they might use.”

At that point, Lieutenant Governor Dan Forest, who was presiding over the Senate, interrupted McKissick to inform him that his “history lesson” wasn’t “germane to House Bill 2.”

Senator Buck Newton, a Republican who lost a race for attorney general last month, stood up and described HB2 opponents as the “lunatic left” and the “hateful crowd from California and elsewhere.”

“And yes, I did use the word ‘lunatic left,’” he added. “I hope that’s printed in the [Raleigh] News & Observer tomorrow.”

After sunset, with exasperation running high, the legislature adjourned without taking action at all. Pro-LGBT spectators broke into cries of “Shame!”

“What a disgrace,” said Mara Keisling, executive director of the Washington, D.C.-based National Center for Transgender Equality, who was watching from the visitors’ gallery. “[The legislature] had one job to do. They cut a deal so they could come in and repeal House Bill 2. They controlled the process and they screwed it up. They controlled the substance and they screwed it up.”

Just before the senators adjourned, McKissick spoke again. “The worst part of this is that we’re worse off now than we were when we arrived,” he said. “I’m afraid the public perception of North Carolina, rather than being enhanced, it appears that we doubled down and we failed. … The damage that we’ve done to our brand, our name, our reputation are insurmountable. Every day that we let HB2 remain on the books is a scar on the name and reputation of North Carolina.”

Berger, the Republican leader, was having none of it. He insisted that the governor-elect was to blame by demanding a clean repeal without the moratorium attached. He scolded the Democrats: “Roy Cooper called every one of you and said, ‘Don’t vote for that,’ even after I had conversations with several of you that said, ‘That sounds reasonable. Makes sense. We ought to do that.’”

Berger paused. “I cannot believe this,” he said. He hurled his microphone onto his desk and fell silent.