The liberal city wanted it down; the GOP state legislature forbade that; activists found a way to end that impasse. 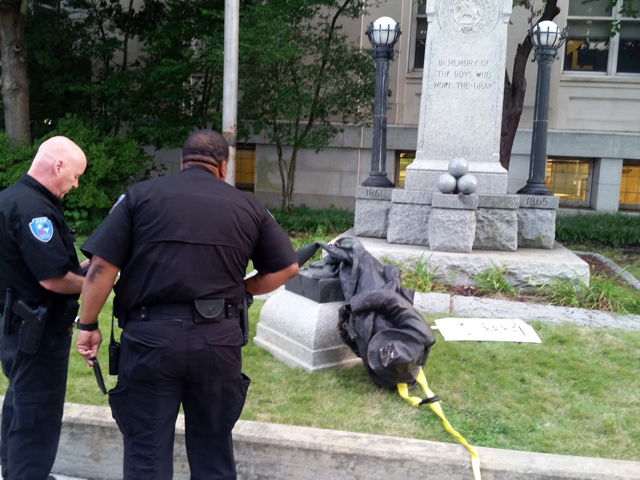 A toppled and crumpled Confederate statue lies on the ground in Durham, North Carolina. Photo by Barry Yeoman.

JILLIAN JOHNSON WAS OUT of town Monday night, as a group of young activists were yanking the Confederate soldier statue off its granite pedestal in downtown Durham, North Carolina. She learned the news from a text message, which included a photo of the toppled monument. The metal figure had crumpled upon impact. It lay shoulder-down on the old courthouse lawn, collared by a yellow nylon strap.

Johnson, who is African American and sits on Durham City Council, had occasionally walked along Main Street, craned her neck at the statue dedicated to “the boys who wore the gray,” and felt upset by its presence on public land. Like many Confederate monuments, it was not an immediate reaction to the Civil War. Rather, it was dedicated in 1924, during a time of night rides and lynchings—the year before tens of thousands of Klansmen descended on Washington, D.C., for a silent but fearsome show of power. The Durham monument was built “not to venerate the war dead,” Johnson says, “but as a very explicit tool of racial animus and white supremacy.” It was intended, she says, to intimidate African Americans.

Yet Johnson had no jurisdiction over the statue. Nor did any local official. A 2015 law, enacted by the Republican-controlled state legislature and signed by then-Governor Pat McCrory, bars municipal governments from permanently moving historic monuments from public property without state permission. The law makes no mention of the Civil War, but it passed less than a month after filmmaker Bree Newsome scaled the flagpole outside the South Carolina Capitol and lowered the rebel battle flag. Ten days before that, in Charleston, white supremacist Dylann Roof had mowed down nine worshippers at an African American church.

Restrained as an elected leader by her own state government, Johnson felt sympathetic toward the Durham protesters, especially after the weekend’s bloodshed in Charlottesville, Virginia. “I understand why people felt this was the most expedient way,” she says. “There was no legal way to make it happen.” That night, she posted a photo of the wreckage to Twitter, adding the words, “Our residents took care of it instead.”

The blowback began promptly. “How is this different than ISIS destroying 1,200-year-old buildings?” asked a software engineer from Raleigh—one of dozens of replies to Johnson’s tweet.

Johnson shot back: “This reminds me of when my eight-year-old asked me what the difference was between a person and a comet.”

AS A DURHAMITE FOR more than 30 years, I’m struck by how benign the reactions to the guerilla toppling have generally been—how many community leaders have praised, defended, or conspicuously overlooked the act. On social media, locals have countered the ISIS analogy by invoking the 2003 downing of a Saddam Hussein statue in central Baghdad.

Admittedly, this response hasn’t been universal. Floyd McKissick Jr., a Democratic state senator whose father led the Congress of Racial Equality in the 1960s, chastised the protesters in a Facebook video Monday night. “We cannot have mobs, regardless of how well-intended they may be, what their social conscience and priorities may be, decide to personally engage to violently take down these Confederate statues,” he said. “There’s a right and a wrong way to deal with this issue.”

The following day, the county sheriff’s office arrested Takiyah Thompson, the North Carolina Central University student and Workers World Party member who climbed a metal ladder to the top of the monument before it fell. Among the charges were two felonies, both involving “property damage in excess of $1,500.” Three others were arrested Wednesday on the same charges.

Other leaders, though, took more generous stances toward the activists. City Council member Charlie Reece tried to intervene with the sheriff to prevent the felony arrests. “Here’s what I told him,” Reece says: “If you believe these folks should be charged at all, please don’t charge them with felonies. There’s no way on earth that hunk of mass-produced junk metal was worth over $1,500.” (The sheriff’s office says that that one replacement estimate exceeded $130,000.)

Mayoral candidate Pierce Freelon, the 33-year-old son of the architect who designed the National Museum of African American History and Culture, compared the Durham topplers to the Greensboro Four, whose 1960 sit-in at a Woolworth’s lunch counter helped accelerate the struggle against legalized segregation, and to Montgomery bus-boycott hero Rosa Parks.

“Make no mistake—this monument was not simply a metaphor for racial injustice, it was a perpetuation of it,” Freelon wrote to supporters. “Its presence in front of Durham’s courthouse was a dark cloud, forecasting the impending racial disparities that have stormed this city, and this country, for centuries.”

TO UNDERSTAND WHAT HAPPENED on Main Street, it helps to know about the disconnect between liberal Durham and North Carolina’s state government, which since 2011 has been dominated by a compromise-averse GOP legislative majority. Until this past January, Republican McCrory sat in the governor’s mansion for four years, giving Republicans a lock on policymaking. They slashed education funding, turned away federal Medicaid dollars, and restricted ballot access for minority voters. They also passed a series of measures to rein in liberal and even moderate city governments.

Among those efforts was House Bill 2, which stripped municipalities of the right to enact certain civil-rights and worker protections. (The most notorious provision, barring some transgender people from using restrooms in public buildings corresponding to their gender identities, has since been repealed. A moratorium on local anti-discrimination ordinances remains.)

When the Democrats ruled, they also preempted local policies, including smoking and gun restrictions. But since the 2011 GOP takeover, the legislature has grabbed even more power from localities, trying to wrest control of Asheville’s water system, Charlotte’s airport, and Durham’s right to protect its watershed. That’s the context in which Republican legislators took away the right of local governments to move Confederate monuments.

No city has bristled as hard against North Carolina’s—and the nation’s—rightward currents than Durham, population 263,000, which has no majority race and has a long history of political power-sharing between African Americans and whites. It votes solidly Democratic: Hillary Clinton carried the county, which includes some rural areas, with 78 percent of the vote. City Council members, several of whom have roots in grassroots activism, recently passed resolutions against Islamophobia, House Bill 2, and immigration raids, and in favor of more liberal refugee resettlement.

Durhamites have been well represented in the Moral Monday movement, which has brought peaceful but noisy protests to the legislature since 2013, provoking hundreds of arrests. They often fill the downtown plaza to protest world events. And they’ve grappled with their own city’s fault lines earnestly, if imperfectly—through projects like Storymakers, in which residents have talked about race, class, faith, and immigration, and produced radio and podcast stories on those issues.

For all the good efforts, the fault lines remain stark. African Americans, who make up 40 percent of Durham’s population, account for 80 percent of its misdemeanor marijuana charges, according to a 2015 report by the Self-Help Credit Union. Four-fifths of those searched during police traffic stops are African American, says an analysis of 2009–2013 data by the Southern Coalition for Social Justice.

What’s more, the Confederate monument sits in a once-moribund downtown that, since 2010, has pulsed with restaurants, galleries, microbreweries, and boutique hotels. At its center, a 27-story mixed-use tower is rising, with condominiums topping out above $1 million. The result of these enlivened streets is a spike in real-estate prices that has displaced people of color. Some black-owned businesses have closed, and the ring of neighborhoods immediately surrounding downtown has become noticeably whiter. The statue honoring “the boys who wore the gray” was a daily reminder, right on Main Street, that the long arm of white supremacy has 21st-century reverberations in even the most liberal of cities.

Given this confluence—an activist community, a gentrifying city, a hostile state government, glaring racial disparities, and an emboldened national white-supremacist movement—it’s unlikely Durham will quiet down any time soon. On Thursday, several dozen activists lined up at the entrance to the county jail, volunteering to be arrested in solidarity with the original four. (Deputies declined to arrest those without outstanding warrants.) Some, like the Reverend Joe Stapleton, had not been present at the original toppling.

“We are all guilty here of fighting white supremacy,” said Stapleton, who works at Durham’s Cornerstone Community Church. “Taking down the statue was necessary, needed, long overdue.” He mentioned the state law and added, “Let’s be real: No one else was going to do it. I think, as a pastor, if you are not fighting white supremacy and racial capitalism, then you’re not really a minister.”