Since Republicans gained control of the North Carolina legislature in 2011, judges have emerged as some of their staunchest adversaries. Now lawmakers want to curb state court powers. 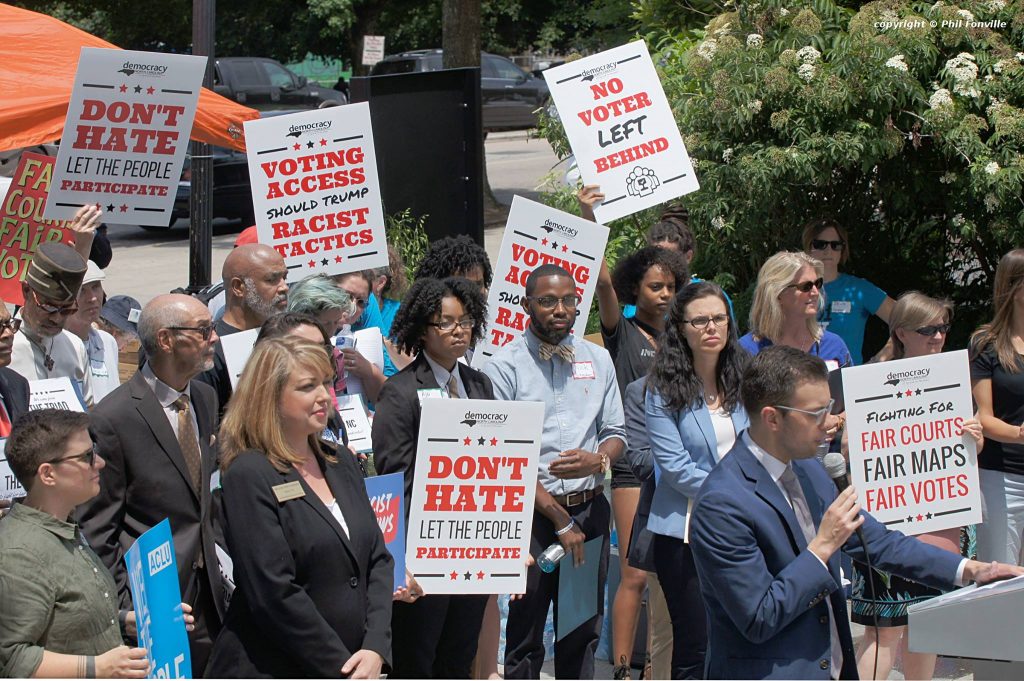 THIS FALL, IN A DISPUTE OVER GERRYMANDERING, federal judges stripped North Carolina lawmakers of the power to draw their own state district lines. The decision was just the latest setback for the state’s Republican legislative leaders: Federal courts have overturned restrictions on abortion and same-sex marriage, and in 2016, halted a voting-law overhaul that, judges said, targeted African Americans “with almost surgical precision.” State judges, who are elected, have also restrained legislators: Last year, North Carolina’s Supreme Court overturned a law canceling tenure for veteran schoolteachers.

Now state lawmakers are striking back with an all-guns-blazing strategy that could serve as a national template for neutralizing the courts.

Republicans haven’t hidden their displeasure with what they call judicial activism. Last February, Senate Leader Phil Berger and House Speaker Tim Moore lashed out at three state judges who sided with Democratic Governor Roy Cooper in a dispute over his appointment powers. “If these three men want to make laws, they should hang up their robes and run for a legislative seat,” the duo said in a statement.

If those rulings weren’t frustrating enough for Republicans, they also lost their majority on the state Supreme Court in 2016. In a race where candidates appeared on the ballot without party labels, voters elected Mike Morgan, a Democrat who, in 1964, desegregated an all-white elementary school. Since Morgan’s victory over a Republican incumbent, lawmakers have introduced a slew of measures to revamp how state judges are chosen and to limit their powers.

Some of those ideas, like restoring partisan races, have already passed into law. Others, including a de facto nullification of the last round of judicial elections, are under consideration. The most extreme, a constitutional amendment that essentially lets legislators name judges, will likely be introduced during a special legislative session that begins on January 10.

None of this is happening with the deliberation one might expect when one branch of government gets a complete overhaul. The current process bears no resemblance to the Bell Commission, which the North Carolina Bar Association established in 1955 at the request of Democratic Governor Luther Hodges to set up a unified state-court system that was not fully implemented until 1970.

“They have firebombed the courthouses across the state, creating chaos, and I think it’s all to gain partisan advantage,” says State Representative Marcia Morey, a Democrat who spent almost two decades as a judge. “They have not liked case decisions, and they need to get friendly judges in there.”

This phenomenon is not limited to North Carolina. “We’ve been tracking legislative efforts across the country to politicize courts or otherwise weaken courts’ independence,” says Alicia Bannon, senior counsel at New York University’s Brennan Center for Justice. “What we’ve seen in North Carolina is consistent with trends around the country, but a more extreme version.”

Six weeks after Mike Morgan’s victory, the legislature voted to make Supreme Court elections partisan, as they had been until 2004. Last March, they extended that system to all state judicial races, overriding Cooper’s veto.

Republicans hold up Morgan’s win as Exhibit A for partisan elections: Without party labels, his race drew about 450,000 fewer voters (out of 4.8 million ballots cast) than other down-ballot races. “Clearly the voters prefer [to have] more information on the ballot,” says State Representative Justin Burr, a Republican sponsor of the March bill. “And perhaps it would have resulted in a different outcome.”

The problem with partisan judicial races is that they inject the political rough-and-tumble into what’s supposed to be most independent, most contemplative branch of government.Safeguarding that autonomy becomes harder when political parties and their donors get involved.

“Campaign contributions appear to affect the outcome of cases in states where judges are elected in a partisan contests (Michigan and Texas) but not where they are elected on a nonpartisan ballot (Nevada),” argued political scientists Chris Bonneau of University of Pittsburgh and Damon Cann of Utah State University in a 2009 paper that examined the highest courts in those three states.

North Carolina’s new partisan-election system also bucks a national trend awayfrom party labels, according to data from the National Center for State Courts. What’s more, other researchers have found that party labels do not necessarily help voters make more informed choices. In a 39-state study, Cornell University economist Claire Lim and Harvard University political scientist James Snyder Jr. discovered that, in states with partisan general elections, the quality of judicial candidates matters less to the outcome than in states with nonpartisan systems because some voters pull the lever based entirely on party affiliation, without researching the candidates’ qualifications.

Meanwhile, North Carolina lawmakers continue to make changes to the courts. In April, legislators reduced the number of Court of Appeals judges from 15 to 12, which prevented Cooper, the Democratic governor, from replacing retiring judges. In June, they made it harder for judges to waive fines and court costs for indigent defendants.

Then, in October, they canceled the 2018 spring judicial primaries altogether, claiming they needed time to reform the system and redraw district lines. (The proposed House map has been criticized as a pro-Republican gerrymander.) All three measures required the Republican supermajority to override Cooper’s vetoes.

“The legislature is angry that their bad laws continue to be overturned by the courts,” Cooper said in a statement about the canceled primary. “This is the first step toward a constitutional amendment that will rig the system by moving to partisan, legislative selection of judges.”

Rabon declined an interview request, but one of his colleagues has called the bill a reaction to judicial activism. “If you’re going to act like a legislator,” Republican State Representative David Lewis told public-radio station WUNC, “perhaps you should run like one.”

Rabon’s measure is so over-the-top that many North Carolina state house watchers think that it is designed to force another solution: the abolition of judicial elections altogether. A Senate committee is studying the issue and will likely introduce a constitutional amendment during the January 10 session.

One proposal would authorize legislators to nominate three or more candidates for every vacant seat and would require the governor to choose from the lawmakers’ lists. Though the selection powers would be shared—and a commission would first vet potential candidates—lawmakers could screen out anyone who didn’t share the majority party’s political views.

There are good reasons to abolish judicial elections, which are often tainted by attack ads and dark-money campaign donations. But the Brennan Center notes that legislative appointments are problematic too. State lawmakers name judges in only two states: Virginia and South Carolina; and, in both states, lawmakers have appointed their relatives and colleagues to the bench.

What’s more, judges might be reluctant to rule against the very officials who appointed them. “If a judge is hearing a case on a signature legislative initiative,” says the Brennan Center’s Bannon, “the pressure can have an impact on how the judge rules.”

No one outside North Carolina’s Republican leadership knows exactly what will happen on January 10. Whatever measure passes, one thing is certain: The Democrats will have little influence on the legislation. At the Senate committee’s last meeting on December 13, co-chair Dan Bishop refused to let Cooper’s invited representative speak, explaining that the governor should not have sent a retired judge as his envoy.

“There’s no reason why that voice shouldn’t be heard,” said State Senator Floyd McKissick Jr., one of three Democrats who walked out of the meeting in protest. “The only thing they do is erode the integrity of anything that comes out of this process.” (Bishop did not respond to a message seeking comment.)

North Carolina’s civil-rights and good-government groups are preparing for the special session. In recent years, they’ve been tested by battles over gerrymandering and the voting-law overhaul. Now they’re focusing on the courts and will hold a rally and lobbying day—on January 10.