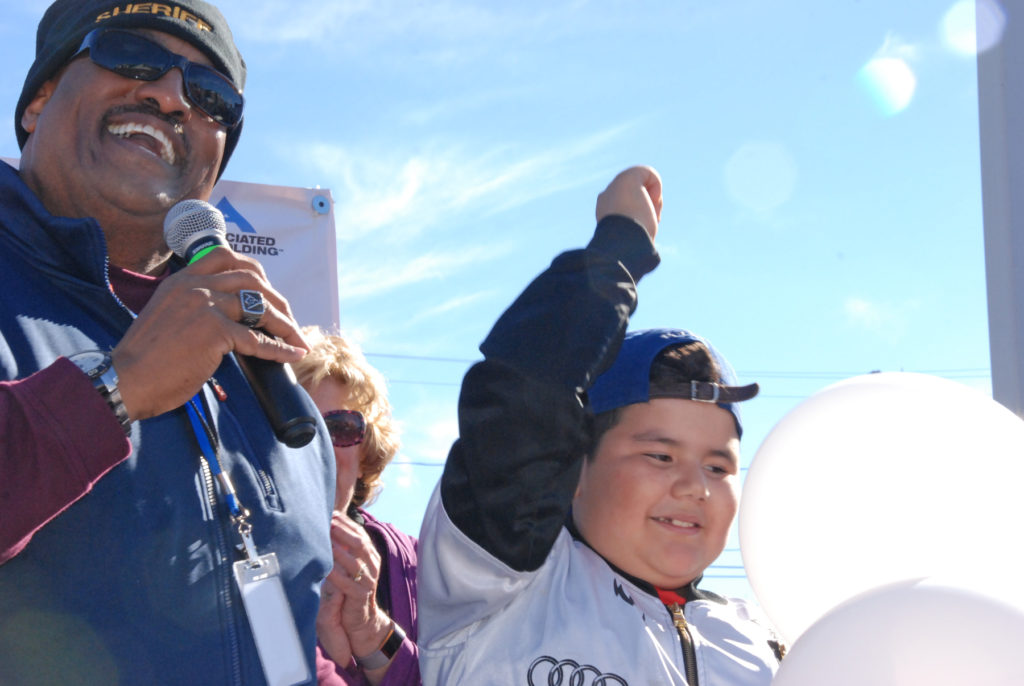 Durham’s Clarence Birkhead cast himself as a representative of the county’s inclusive values. Photo courtesy of Durham County Sheriff’s Office.

DURHAM, N. C. — THREE DAYS AFTER HE WAS SWORN IN as Durham County’s new sheriff last month, Clarence Birkhead ended his department’s cooperative relationship with U.S. Immigration and Customs Enforcement. Within a week, his staff rebuffed ICE 11 times, releasing immigrants from the county jail rather than holding them for the federal agency to pick up as a first step toward deportation.

Other new sheriffs were doing much the same. In Mecklenburg and Wake counties, North Carolina’s largest jurisdictions, they notified ICE that their offices would no longer participate in the federal program that delegates immigration enforcement to local agencies.

The collective snub was the first move in a looming upheaval in how the state’s urban sheriffs do their job. In the fall, all seven of the most populous counties elected African Americans as their top law enforcement officer — not only a reflection of the shifting dynamics here, but a sharp break from the nation’s historical pattern of picking white men for the position and then keeping them there in perpetuity.

All seven counties have white majorities. Buncombe County, which includes Asheville, is 91 percent white. Yet five of the new sheriffs defeated white incumbents. Another beat the retiring sheriff’s white heir apparent. The seventh, Cumberland County’s Ennis Wright, was appointed in 2017 to fill a vacancy and faced voters for the first time.

An additional historic mark in November was the election of Paula Dance in Pitt County in the eastern part of the state. She is North Carolina’s first black female sheriff.

“It’s wild,” said Mirya Holman, a political scientist at Tulane University who co-authored a 2015 report that found that 95 percent of sheriffs in the country were white. That figure, she argued, is no accident.

“There’s a lot of history of sheriffs being key upholders of racist institutions,” Holman noted recently. “Sheriffs played key roles in Jim Crow, in enforcing racist laws in the South. They played key roles in instigating race riots in the American Northeast and Midwest, on the West Coast.”

Still, urban voters have long overlooked the office. In many states, she said, it was only during the 2018 election cycle that “organizations that are interested in electing people of color started paying attention to sheriffs.”

Part of the shift can be traced to the contentious national conversation about how law enforcement treats communities of color — from the Trump administration’s policy of deporting immigrants without criminal records to high-profile police beatings and killings of African Americans. In North Carolina, those issues were at the core of several urban sheriffs’ races.

In Mecklenburg County, which includes Charlotte, an immigrant-led revolt against the 287(g) immigration enforcement program helped elect Sheriff Garry McFadden. The longtime homicide detective promised to withdraw from the program.

“It doesn’t keep the community safe,” said Oliver Merino, co-founder of the advocacy group Comunidad Colectiva, who helped organize the resistance and campaigned independently for McFadden. Studies by the University of North Carolina’s Latino Migration Project and the libertarian Cato Institute have concluded 287(g) erodes trust between immigrants and law enforcement, with little to no evidence the program reduces crime.

In Buncombe County, the political mood was reinforced by the videotaped beating in 2017 of an African American jaywalker by Asheville city police. “What I heard at the community level is people wanting leaders and law enforcement engaging honestly [and] coming up with concrete solutions around use-of-force issues,” said the Rev. Jasmine Beach-Ferrara, a Democratic county commissioner.

Buncombe voters rejected the retiring sheriff’s endorsed candidate. They instead chose Quentin Miller, a retired police sergeant who embraced the findings of President Barack Obama’s Task Force on 21st Century Policing. Its report emphasized de-escalation training and urged officers to adopt “a guardian — rather than a warrior — mind-set.”

But beyond the law-enforcement issues, the sheriff races signal North Carolina’s changing demographics. The state has long been purple politically; the governor is a Democrat, but Republicans control the legislature. Assessing the recent electoral outcomes — with the defeat of three Republicans, all seven urban sheriffs are now Democrats — Duke University political scientist Kerry Haynie sees a “blue tint” in the future.

“Blacks and Latinos are becoming an increasingly larger share of the population and the electorate, and that’s beginning to have a political effect,” he said. “This may be a precursor for North Carolina being a battleground in 2020.”

Durham County was the scene of one of the most lopsided upsets. Long a cigarette-manufacturing hub, its morning air for decades had a thick, sweet tobacco scent. But the Liggett & Myers factory closed in 2000, and now the county of about 312,000 has a tech-and-health-care economy, two universities and a reputation for liberal activism. Political discussions in Durham, from the courthouse to the coffee shops, often center on racial justice.

Until last month, the sheriff was a white veteran lawman named Mike Andrews, 60. His performance was the topic of many of those discussions.

Andrews faced protests over conditions at the county jail, where nine inmates died since he took office in 2012. (All but one were African American.) Detractors also accused him of grandstanding after he tried to slap felony charges on 12 activists who toppled a Confederate statue in 2017, days after the deadly “Unite the Right” rally in Charlottesville.

Andrews did not respond to several interview requests.

As in other North Carolina sheriff’s races, immigration played a central role here. Andrews routinely honored “ICE detainers,” requests that inmates be held for up to 48 hours beyond their scheduled releases. “I’d rather [ICE] come to a single location than to be in our community, causing fear and panic times 10,” he told a television reporter in May.

His office released 87 inmates to ICE last year. That cooperation left many immigrants fearful, particularly in light of the Trump administration’s stepped-up enforcement.

Enter Birkhead, a 58-year-old former semipro football player who had headed the police forces of Duke University and the nearby town of Hillsborough. He cast himself as a representative of the county’s inclusive values — a protector of “everyone who’s here, regardless of their immigration status” — and he pledged not to cooperate with ICE unless legally compelled. Winning the trust of Durham’s Latinos, he said, meant distancing himself from a federal agency known for tearing families apart.

“If I’m over here cooperating with ICE and facilitating the deportation process,” he said in an interview, pointing in one direction before pivoting his body, “that’s not going to play well when I’m over here trying to build relationships.”

Birkhead links his views on immigration to a larger philosophy of encouraging “second chances” for small-time offenders and concentrating on serious threats to public safety rather than marijuana misdemeanors, for example. “There are other issues that need to be addressed, [like] the presence of guns in our neighborhoods,” he said.

Birkhead built strong relationships before and during his campaign with advocates of criminal justice restructuring and minority communities. He promised regular meetings with immigrant leaders. “He would come to every single event that we organized,” said Ivan Almonte, a co-founder of the local group Acción Política Latina. “He was eating our food. He was sitting with us.”

In the end, the challenger won endorsements from across the political spectrum. He crushed Andrews in the May Democratic primary with 69 percent of the vote, then racked up 92 percent in November against two write-in candidates.

Immigrant leaders say it is a relief to have a sheriff who will not voluntarily cooperate with ICE. Some undocumented immigrants have faced deportation after minor traffic violations, when the officers ticketing them discovered they were driving illegally. North Carolina does not issue licenses to residents without Social Security numbers.

The groups still plan to remain vigilant. “We trust him,” Almonte said of Birkhead. “But he knows that, if he does something with [ICE], we’ll keep him accountable.”