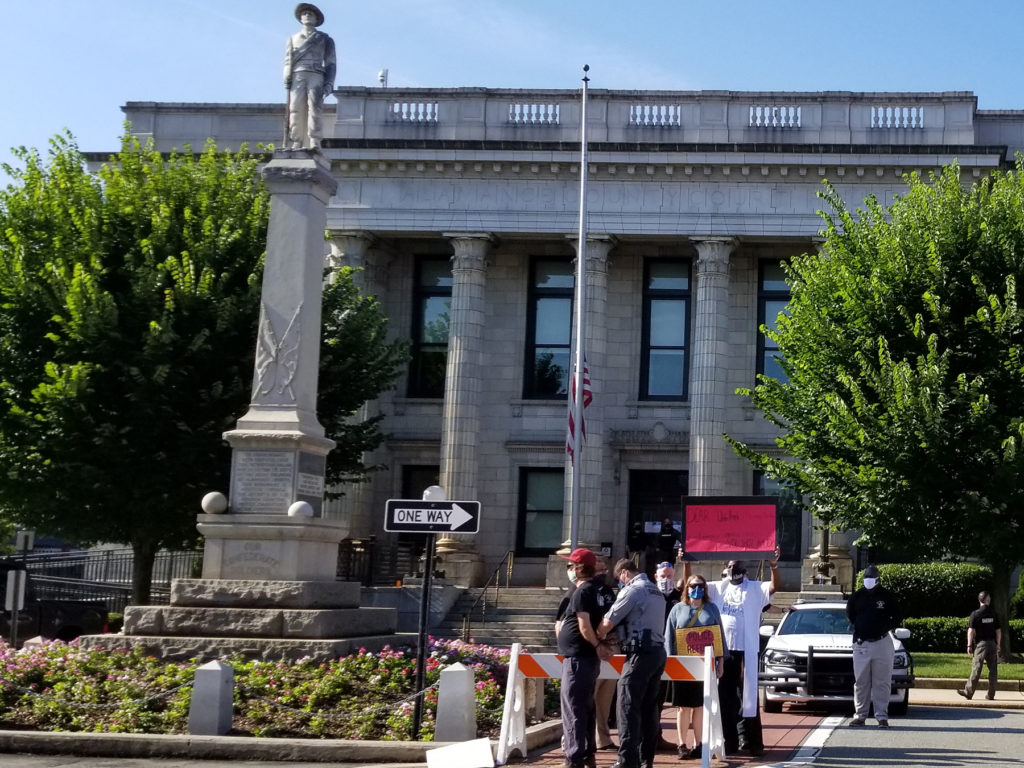 A deputy sheriff arrests Noah Read, a member of the Alamance County Board of Elections, for protesting racism beside the Confederate monument in Graham, N.C. Trina Harrison and the Rev. Walter Allison, holding signs, also were arrested. Photos by Barry Yeoman.

Brown, the president of the NAACP’s area branch, grabbed a cardboard poster and slipped across the line of orange cones that demarcated the legal protest zone. He crossed a traffic circle and stood silently next to the Confederate monument in front of the Alamance County Courthouse.

One of the 12 deputy sheriffs guarding the 30-foot-tall monument, a marble statue of a Confederate soldier atop a granite column, directed Brown to leave. When he refused, the deputy handcuffed him and charged him with resisting an officer and impeding traffic. Three more protesters, including a member of the Alamance County Board of Elections, were arrested a few minutes later on the same charges.

Civil rights activists in this former textile-manufacturing city have been sparring for weeks with elected officials over limits on protests and what constitutes free speech. In addition to the ban on protests at the monument and courthouse, Graham Mayor Jerry Peterman has also declared five states of emergency, citing the potential for “civil unrest” or “severe damage” in this city of 15,600. Most of his emergency orders imposed curfews, and one temporarily suspended all demonstration permits. “Any group(s) attempting to protest without a permit, will be in violation and subject to arrest,” the Alamance County Sheriff’s Office posted on Facebook June 26.

Brown felt frustrated by these restrictions. Cordoning off the monument, he said, glorifies the “Lost Cause,” a nostalgic view that bathes the antebellum South in “magnolia and moonlight” and downplays slavery. “I’m tired of people telling me what I can do, and where I can stand, and where I can go,” he said, “and having to accommodate a system that’s not trying to accommodate us at all.”

Earlier this month, the NAACP branch and eight individuals sued Graham and Alamance County’s top officials in U.S. District Court. The plaintiffs claim the leaders have abridged their First Amendment rights to free speech and free assembly and their Fourteenth Amendment rights to due process.

“Proximity and symbolism matter when we think about speech,” said Kristi Graunke, legal director of the American Civil Liberties Union of North Carolina, one of several groups representing the plaintiffs. “When you want to challenge white supremacy, when you want to challenge the way that the Lost Cause myth has been perpetuated by public institutions and public systems, where would you go other than the Confederate monument?”

The lawsuit also says that neo-Confederate demonstrators long gathered at the monument without interference.

The police killing of George Floyd on May 25 in Minneapolis sparked nationwide protests, from cities to suburbs to small towns. The events unfolding in Graham lack the drama of cities such as Portland, where federal forces have used tear gas and flash bang grenades to disperse anti-racism protesters. But they raise similar questions about how much municipal officials can limit free speech to avoid unrest. 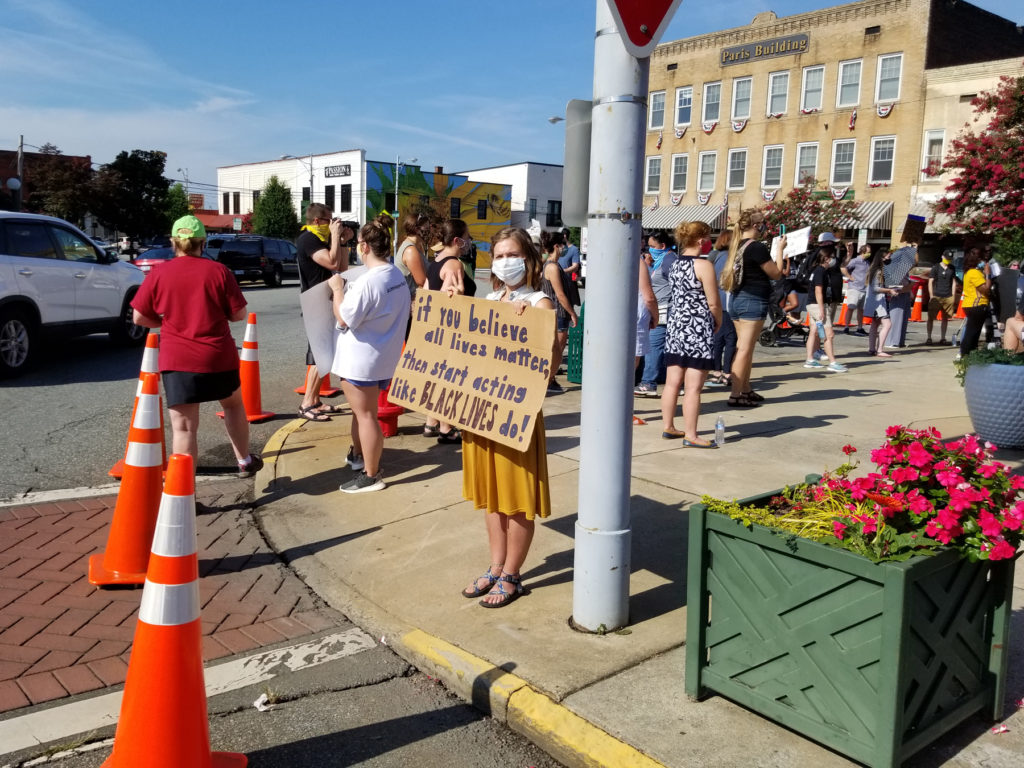 Anti-racism protesters rally July 25 at Sesquicentennial Park, across the street from the Alamance County Courthouse and Confederate monument.

“The courts have traditionally recognized that local officials dealing with the situations are in the best position to judge how imminent the threat is,” says Norma Houston, an emergency-management-law expert at the University of North Carolina School of Government. “[But] there has to be some factual basis. The threat has to be imminent or actual.”

Law enforcement has shut down even small, quiet protests in Graham. In late June, a Facebook video shows, at least 10 city and county officers responded to a one-man sunrise vigil at the monument. Colin Dodd, now one of the plaintiffs, said he left before he could be arrested.

None of the 14 defendants agreed to be interviewed about the lawsuit. Peterman and six others said they could not discuss pending litigation.

In a June 27 news release, the Graham Police Department explained that City Hall had suspended protest permits because of a “clear and imminent threat to public safety.” Police said they had received “viable intelligence” that Graham had been targeted by a group that “had been involved with other protests in the state that had turned violent.”

A few days later, Peterman suggested that he was trying to safeguard civil rights activists by limiting protests. Downtown Graham has been a gathering spot for self-described “Southern rights” advocates who display Confederate flags and sometimes carry weapons. In June, two Elon University professors, one protesting racism and the other taking photos, were assaulted on camera.

“[W]e are being sued by some of the very people we set out to protect,” the mayor wrote on Facebook. He later deleted the post.

After the lawsuit was filed, the two sides reached an agreement on one issue. The Graham City Council repealed a 1978 ordinance requiring permits for any assembly of “two or more persons for the purpose of protesting any matter.” The ordinance also allowed police to limit gatherings on busy streets to six people.

Still unresolved are the mayor’s emergency orders and the ban on protests at the courthouse and Confederate monument. On Tuesday, the plaintiffs asked the court for a temporary restraining order that would, in effect, prevent a repeat of last Saturday’s arrests. The new motion said Graham’s emergency orders are “unsupported by actual or imminent emergencies.”

The history of Graham’s courthouse square makes the access issue particularly charged. In 1870, during an outbreak of white-supremacist violence, members of the Ku Klux Klan kidnapped a Black town commissioner named Wyatt Outlaw. They dragged him to the courthouse and hanged him from a tree. According to a news report, witnesses found a card pinned to his body that said, “Beware! you guilty parties — both white and black.”

One of those implicated in the murder, but never convicted, was Jacob Long, the leader of two local Klan chapters. In 1914, Long helped unveil the Confederate monument. “It is well for us . . . to recall the achievements of the great and good of our own race and blood,” he said that day.

Race relations here remain tense. In 2016, Alamance Sheriff Terry Johnson signed a settlement with the U.S. Justice Department to dismiss an appeal of a federal lawsuit accusing him of targeting Latinos. (A lower court had found in Johnson’s favor.) In May, at an Alamance County Board of Commissioners meeting, commissioner William Lashley, a former police officer, said of today’s law enforcement standards: “You can’t do now what we could do when I was on. We used to beat the hell out of them.” He later apologized.

In June, a video circulated on social media of someone showing off a gun at a downtown store and saying, “No looting in Graham.” According to the Burlington Times-News, the business is co-owned by Jennifer Talley, a city council member. Talley did not respond to interview requests but told the Times-News that she had not authorized the display of firearms.

“There’s a pall over the city,” said the Rev. Tamara Kersey, associate pastor at Graham’s Wayman Chapel AME Church and a plaintiff in the lawsuit. “There’s like this cloud.”

Graham city manager Frankie Maness, a defendant, said City Hall is working to improve the racial climate by talking with residents, recruiting minority job candidates and adopting policing policies like a ban on chokeholds. “People of color are certainly welcome [in Graham],” he said. “If you experience anything contrary to that, I would like to know about it. I would like to address it.”

As the lawsuit awaits a hearing, more than 300 elected officials, faith leaders, business owners and others have called for the relocation of the Confederate statue. The list includes the mayor of nearby Burlington and the president of Elon University.

A 2015 state law makes it difficult to remove monuments from public land absent a “threat to public safety.” In an email to county commissioners advocating for relocation, Bryan Hagood, the Alamance County manager, raised the specter of a violent confrontation between law enforcement and protesters. “I believe this would be a terrible thing for Alamance County,” he wrote, “to have someone seriously injured or killed by one of our deputies or a Graham Police Officer in an altercation that began as protecting the memorial.”

At Saturday’s rally, speakers took comfort in the mounting calls for relocation. After leading a round of chants, emcee Azurre Walker-Roberson pointed across the traffic circle to the deputies guarding the monument. “If we weren’t close to winning,” she said, “I promise you, they wouldn’t be over there.”