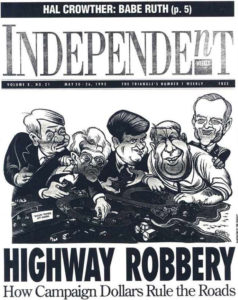 The series ran in five parts, followed by an epilogue four months later. Below are links to PDFs of the each part.

The Independent | Paving Under the Influence (May 20, 1992)
In Part 1 of the series, we introduced our central finding: The people who donate big dollars to political causes maintain a tight grip on the N.C. Department of Transportation (DOT), steering millions of dollars to help themselves and their friends. We tracked three road projects that were influenced by insider deals and political connections. In a sidebar, we used a long-suppressed study to debunk the myth that highway construction is a sure-fire tool for economic development.

The Independent | The Road to Ruin (May 27, 1992)
In Part 2, we showed how the DOT bends and breaks environmental rules to build its roads, sometimes to help big-money contributors. In a companion piece, we documented an inside deal between DOT and a North Carolina developer. The deal helped DOT avoid the most basic environmental regulations while building a road on fragile North Topsail Islands, while at the same time helping to pour more than $15,000 into then-Gov. Jim Martin’s campaign coffers.

The Independent | Colliding With Community (June 3, 1992)
In Part 3, we documented how road construction by DOT runs over human communities. We focused on two examples: a road rerouted through a black working-class community at the behest of two influential campaign contributors, and a freeway that threatens to wipe out the oldest black farming community in North Carolina.

The Independent | Wheels and Deals (June 10, 1992)
In Part 4, we examined the ways political money helps keep North Carolina’s aggressive highway program on course—even as social programs are cut. We focused on the power of the state Board of Transportation, whose members since 1985 have raised more than $3.5 million to the Republican cause. We also looked at the power of the highway lobby, as well as the special “slush funds” that DOT uses to keep the support of the state legislature.

The Independent | Alternate Routes (June 17, 1992)
In Part 5, we focused on reform. We offered six major changes that must take place on a state level, both to reform transportation policy and to increase the influence of ordinary citizens. In a companion piece, we profiled a group of citizens in Asheville who were trying to wrest decisionmaking away from big-money political donors.

The Independent | Action and Inaction (Oct. 7, 1992)
Four months after the series ran, we examined its mixed impact—and showed how the struggle for reform continues in remote North Carolina communities.