Even before the BP disaster, Louisiana was a coast in crisis due to rising sea levels, lost marshes, and the manacled Mississippi.

Part 1 of Losing Louisiana, a series originally published in onEarth. 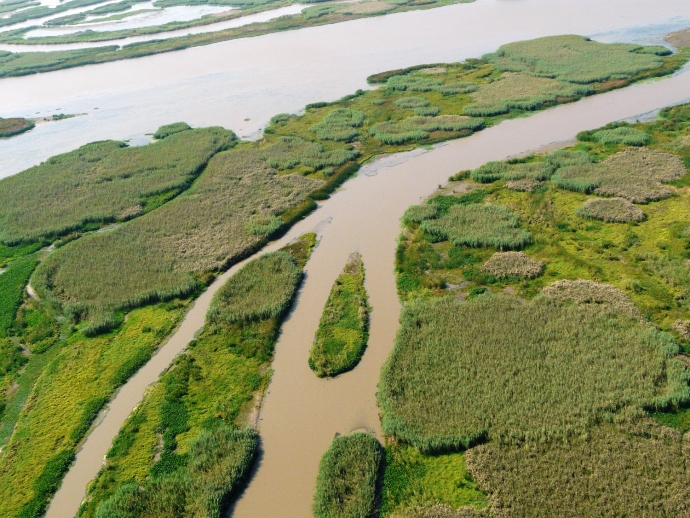 Louisiana’s marshes are disappearing faster than coastal wetlands anywhere else in the country. Photos by Barry Yeoman.

ON THE SIX-MONTH ANNIVERSARY of the Deepwater Horizon blowout, I flew 500 feet over the Mississippi River Delta in an open-sided Black Hawk helicopter. The sky on this Wednesday afternoon was blue beyond imagination. We took off from New Orleans Lakefront Airport; within moments we had cleared the populated area and were flying over terrain that was flat and primordial, neither fully water nor fully land. Natural channels snaked through marshland that was green like moss against the sparkling water. Other channels were long and straight, built by the oil and gas industry for navigation and exploration. Three roseate spoonbills —  which our guide, biologist Windell Curole, playfully described as “Cajun flamingos” — flew even with our helicopter, maybe 75 feet away. Below us, a flock of egrets took off in unison.

Curole, a seventh-generation Louisianan and the first in his family not to speak French as a first language, kept up a running commentary through our noise-blunting headphones. He noted the approach of Barataria Bay, a hotspot for pelican rookeries and one of the hardest-hit sites after the oil spill. He pointed out the place where Jean Lafitte, the leader of Barataria Bay’s pirates, had his Louisiana headquarters. And he waxed eloquent about the Delta’s importance to the energy, seafood, and shipping industries. “Louisiana is a working coast. These are not condos on the beach,” he said as we passed over the oil-and-fishing town of Venice. “Jefferson bought this area because he knew that the United States could never be great if it didn’t own the mouth of the Mississippi River. It’s no less important now than when Jefferson bought it.”

But looking down from the helicopter, Curole also saw a Delta in the throes of what he called a “heart attack.” Signs of its ill health were everywhere. And from a distance of 500 feet, none of those symptoms were the direct result of the oil spill.

“Fifty years ago, all this open water you see was marsh,” said Curole, who manages the South Lafourche Levee District, 75 miles south of New Orleans. “Where you see broken marsh, that marsh is falling apart. The open water looked like that five, ten years ago. There’s still fishing here, but the less marsh we have, the less productivity.” That’s true too, Curole said, of land species: “You would not believe how (well) the deer survive in marsh. Now, in this broken marsh, you’re not going to see any.” Curole pointed out an 18th-century Spanish fort built on land but now surrounded by water. Below us, we could see fishing camps that had suffered the same fate. 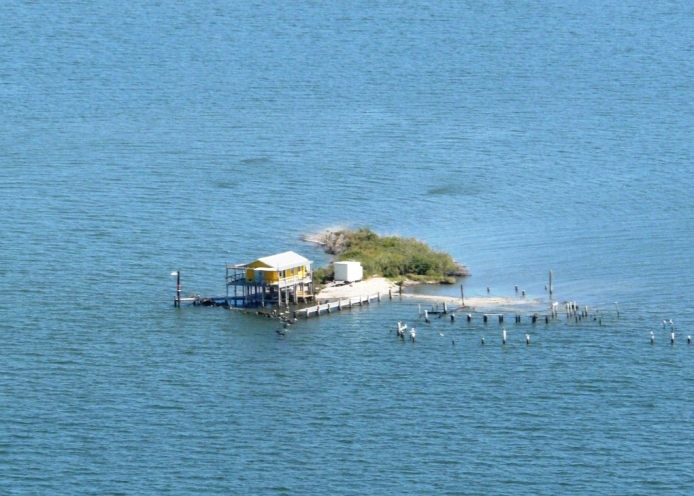 A fishing camp in the Mississippi River Delta, originally built on land, is now completely surrounded by water.

Louisiana has 30 percent of the total coastal marsh in the continental United States and accounts for 90 percent of the coastal marsh loss. It loses a football field’s worth of wetlands every 45 to 60 minutes, depending on whom you ask. I had been learning statistics like these over the past few days. This flyover was co-organized by America’s Wetland Foundation, which this week sponsored a four-day gathering in New Orleans of scientists, economists, environmentalists, engineers, and policy experts from several of the world’s deltas. There I met Matt Rota, water resources program director at the Gulf Restoration Network. Rota laid out some of the modern history of the delta.

“After the Great Flood of 1927, we started walling off the Mississippi River,” he told me. “It used to be that it could flow into the wetlands and renourish the sediment and the fresh water, keeping up with sea-level rise and actually building land. But now we’ve strangled off the lifeblood of the coastal wetlands. Just imagine if you took a tight rubber band and wrapped it around your wrist. Eventually, your hand wouldn’t have enough blood and it would start to die. That’s what’s happening to our wetlands.” In addition, Rota said, the channels dug by the oil and gas industry have allowed saltwater to flow into the brackish and freshwater areas at lethal rates.

The effects of this human engineering harm more than wildlife populations. “Because of the degradation that we’ve had in coastal Louisiana, because of this land loss, it exacerbated the oil spill,” William “Kirk” Rhinehart, an administrator with Louisiana’s Office of Coastal Protection and Restoration, told us in a briefing before the flyover. Losing the outer rim of marshland enabled the oil to seep more easily into the center, where fragmentation of the wetlands made it harder to contain. The ecosystem was already stressed and therefore less resilient. “It took a crisis situation and added a catastrophe on top of it,” Rhinehart said.

Then there are the storm impacts. Two hours before the helicopter tour, America’s Wetland Foundation and the electric utility Entergy released a study forecasting that, with fewer wetlands to serve as buffers against hurricanes like Katrina and Rita, the economic damage along the Gulf (from Alabama to Texas) could total $700 billion between now and 2030. The study’s model didn’t even factor in global warming and the resulting increase in sea levels. 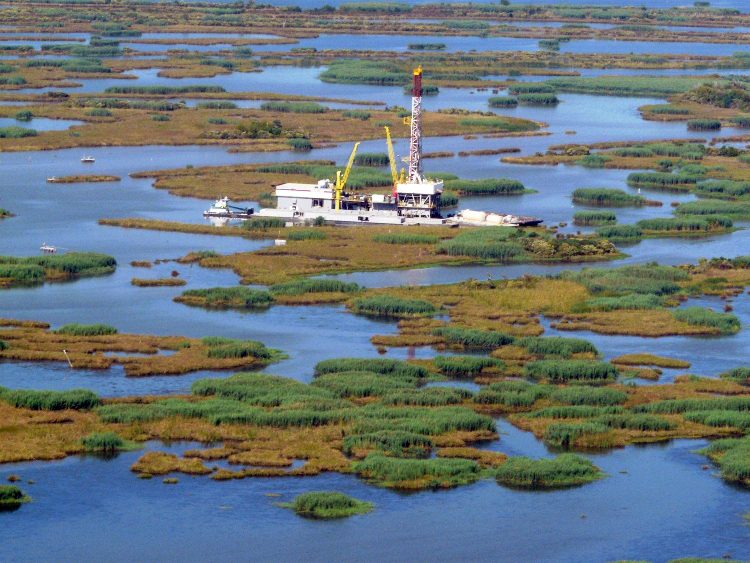 An oil-drilling barge in the Mississippi River Delta.

After the press conference, I asked Entergy’s CEO, Wayne Leonard, what would happen to Louisiana’s coastal communities without decisive action on climate change. “Absent a miracle, they don’t exist,” he told me. “It’s just that simple. When you look at sea-level rise, the subsidence, and the melting that’s occurring in Greenland right now, half of Louisiana will be gone.” Keep in mind, that’s the CEO of an energy company expressing no doubt whatsoever about the potentially devastating impacts of global warming.

Of course, solving this problem is unfathomably complex, and much of the conference was spent hashing through solutions. For inspiration, many delegates looked to the Netherlands, which has been shifting its national policy toward working with nature rather than against it. In one project in the Dutch town of Workendam — where residents opposed the construction of a towering and unsightly flood-control dike — the research institute Deltares is helping develop a plan to combine a less-obtrusive dike with a carefully managed willow forest that would protect against storm surge. “We have a lot of water in the Netherlands, but if we are not careful, we don’t get to see it anymore,” says Deltares ecologist Bregje van Wesenbeeck. “We want to move toward an approach which is more living with water and integrating it in our design.” (In the audio below, Dale Morris, senior economist with the Netherlands Embassy in Washington, D.C., talks about living with sea rise.)

Amidst all the technical discussions, Larry Schweiger, president of the National Wildlife Federation, a keynote speaker at the conference, reminded delegates that no local solution will work without definitive action to address global warming. “The Gulf Coast does not live in isolation from the rest of the planet,” Schweiger said. “Back home, where I grew up, when the pot was boiling over on the stove, you turned the stove down. In order to save our deltas, we need to save our climate.”