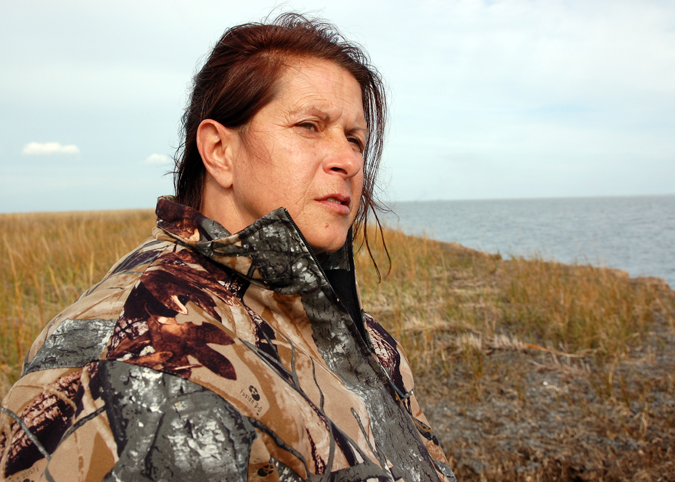 Shrimper Darla Rooks stands on a small island in Louisiana’s Bay Jimmy, which has fallen prey to both the BP oil spill and decades of land loss. Read her story here. Photo by Barry Yeoman.

The BP blowout caused months of pain and suffering for the people and environment of the Gulf Coast. But Louisiana was in trouble long before the Deepwater Horizon disaster. Its wetlands are disappearing at the rate of a football field every hour due to rising sea level, storm damage, and the re-engineering of the Mississippi River. Vanishing wetlands means the loss of wildlife, jobs, and a way of life. In this special online series, contributor Barry Yeoman explores the Gulf Coast’s ongoing environmental, economic, and cultural crisis.

Are We Losing Louisiana? The View from 500 Feet
October 22, 2010: Even before the BP disaster, Louisiana was in trouble due to rising sea levels, lost marshes, and the manacled Mississippi. Our new series explores the environmental, economic, and cultural crisis on the Gulf Coast.

Louisiana Oystermen: Out of Work, Out of Options
October 28, 2010: They’ve suffered through Katrina, the Gulf spill, and what some see as systemic racism (or at the very least, economic inequality). Now this tight-knit community is worried for its future.

The Louisiana Paradox: Loving Wildlife and Oil Drilling
October 29, 2010: It’s something those outside of the state might struggle to understand: How can you be outraged by the BP spill but want to keep drilling for oil? Without clean-energy investments, what’s the alternative?

Where the Oil Went: Gulf Scientists Find Layer of “Slime Snot” on Sea Floor
November 4, 2010: Researchers taking samples of the ocean floor near the Deepwater Horizon well site find a thick layer of oily goo that could affect the Gulf ecosystem.

Gulf Shrimpers Wonder: “Are We Next on the Extinction List?”
November 8, 2010: During a long night on the bayou, husband-and-wife shrimpers wonder whether their livelihood can continue as shrinking wetlands reduce their catch and make the region more vulnerable to hurricanes and oil spills.

These Men Don’t Cry: Hard Times for Gulf Coast Vietnamese
December 1, 2010: Gulf Coast residents are suffering the deep emotional distress that comes with a protracted crisis that has no clear end, and some communities have no safety net.

‘The Land is Washing Back to the Sea’
December 6, 2010: According to GPS, they’re shrimping on dry land. But in South Louisiana’s disappearing marshes, a French-speaking Indian tribe is watching its home literally sink beneath the water.

Louisiana’s Great Wet Hope
December 17, 2010: While the Mississippi was walled off, the Atchafalaya River remained mostly natural. Now its cypress swamps show that commerce and wetlands protection can co-exist.

Restoring the Marsh, One Hated Tree at a Time
December 22, 2010: Refilling manmade canals and fighting back an invasive species might be the only restoration project everyone can agree on in coastal Louisiana’s disappearing wetlands.

Saving Louisiana: What Can We Do?
January 7, 2011: We conclude our Losing Louisiana series by examining some of the ways to put the brakes on a national calamity. Spoiler alert: There are no easy answers.