A tight-knit group of oystermen on the bayou are struggling to survive after the oil spill shut down the oyster beds. Will a way of life die out?

Part 2 of Losing Louisiana, a series originally published in onEarth. 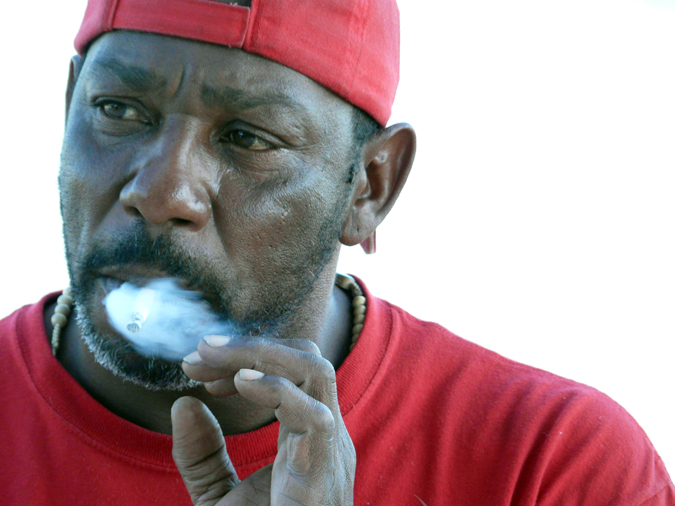 Elton “Hambone” Encalade and other oystermen in Pointe-a-la-Hache, Louisiana, have been living primarily on one $6,000 check from BP for the last six months. Photos by Barry Yeoman.

ELTON “HAMBONE” ENCALADE IS ONE OF THE FIRST oystermen to greet me as I pull into Beshel’s Boat Launch in Pointe-a-la-Hache, Louisiana. He’s sitting on a plastic milk crate that seems too flimsy to support his muscular frame. Hambone has high cheekbones, a beard flecked with gray, and a gaze that is unrelenting. He wears his red baseball cap backward and a tight matching T-shirt. When I arrive at 1 p.m., he and his friends have already emptied a considerable number of beer cans, which lie crushed on the ground amid the oyster shells.

This is not where you’d normally find the African-American oystermen of Pointe-a-la-Hache on a Friday afternoon in October. Depending on the dates of oyster season, they’d either be on their boats, pulling 12-hour shifts that on decent days earn them $100 each, or preparing for the season’s imminent opening. Hambone, who turns 53 next month, dropped out of high school to dredge oysters when he was 16 or 17. There was never any question about what he’d do for a living.

“It goes down through the family,” he says. “All of us around here, we all from across the levees in them little villages. Basically everyone’s forefathers, grandfathers, that’s what they did, and it was passed on from generation to generation. That’s how we learned to do what we do.”

Like the others here, Hambone wonders how many more generations will have the chance to carry on the tradition. Louisiana’s small seafood harvesters have been hit hard — by the oil spill and Hurricane Katrina, for sure, but also by larger changes in the state’s coastal environment. Add to that the vulnerability of oysters (which can’t migrate by themselves) to pollution and environmental factors, and the economic and political marginality of many of Louisiana’s black oystermen, and Pointe-a-la-Hache finds its future in particular jeopardy.

Oystering is highly physical work. The days run from 5 a.m. to 5 p.m., rain or shine, and are fast-paced — “like working on an assembly line,” says 56-year-old oystermen and seafood hauler Byron Encalade (not related to Elton — or if so, distantly). The oysters are dredged with giant rakes and lifted onto the boat with hydraulic winches. They arrive in clusters, which crew members must separate into individual bivalves, keeping the mature, edible ones and throwing the rest overboard. Workers load the oysters into 100-pound sacks, which they stack on the boat, 50 to 100 per day. At the end of its shift, the crew unloads the sacks from the boat and restacks them on seafood trucks.

Oystering takes more than brute force, though: it also requires an intimacy with underwater geography. “Them oysters don’t jump on that boat,” Hambone says. “You’ve got to have a captain with a knowledge enough to know where to go find something, and whether we can make a day’s work there instead of shuffling around here and there. If he don’t find them, I don’t make nothing. And I hate to be looking in his face all day frowning.”

Thanks in part to the bonds that come with hard work, the men of Pointe-a-la-Hache are a tight group of friends. They often spend evenings with one another instead of at home, even when not working. “Sometimes we come in here late at night,” says Byron Encalade. “We live right out there. We might not go home for a week to see our families. We sleep on the boats, look at TV, kick back.” 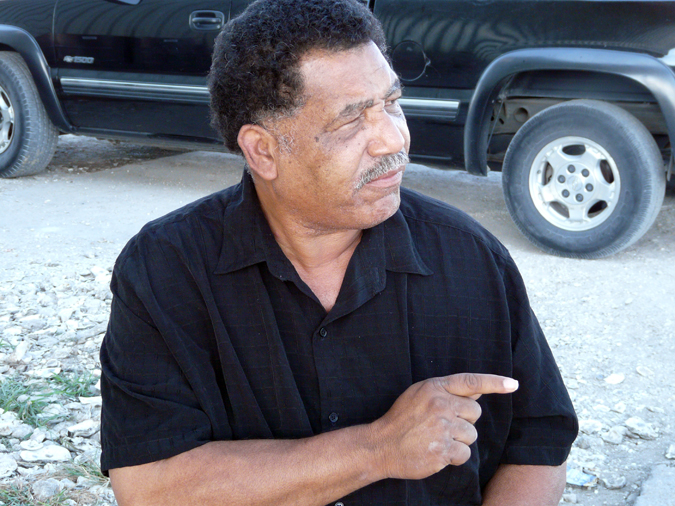 Byron Encalade: “We live with our boats. That’s our life.”

But there’s been no harvesting here since the Deepwater Horizon blowout contaminated Louisiana’s oyster beds six months ago. The beds east of the river remain closed, a decision the oystermen collectively support. Many have received nothing from BP beyond their initial $6,000 compensation checks, which they’ve had to stretch for six months. This, notes Byron Encalade, means living below the poverty line. “We don’t have no need for Mercedes Benzes or Cadillacs,” says Byron, who also heads the Louisiana Oystermen’s Association, which represents blacks and other minority oystermen. “We live with our boats. That’s our life. We’re millionaires as far as we’re concerned. Now you’ve come in and you’ve destroyed that, and you want to replace it with below-poverty income? No way.”

What’s more, the Pointe-a-la-Hache oystermen say they’ve been overlooked by BP’s Vessels of Opportunity program, which deploys fishermen and boaters to help clean up the spill. (BP has denied any racial bias.) For Byron, the spill has been a double whammy: He was also forced to idle his seafood-hauling business and sell one of his two trucks. “I don’t see no way, shape, or form I could even attempt to start them up back up no time soon,” he says. “The business is just not there. When you elect to be a seafood transporter, you can’t haul [other] food products because of cross-contamination.”

The worry and anger here at the boat launch is palpable. “What can we do?” says Norman Reddick, a sharp-tongued 61-year-old who has dredged oysters for 26 of those years and is the quickest among the men to use dark humor to deal with their situation. “You think they got a bank down there that we can rob?” (Reddick and the others make it very clear that they don’t want me to pull punches when writing about what they have say — they’ve had enough of outsiders censoring them.)

Equally palpable is the sense that the BP spill was only the latest in a series of misfortunes that have hit black oystermen with particular force. The 1991 Caernarvon Freshwater Diversion project, designed to undo the effects of saltwater intrusion and coastal erosion in the Mississippi Delta, ended up destroying many of the beds African Americans harvested. Hurricane Katrina walloped Pointe-a-la-Hache, and recovery funds took forever to arrive. Institutional barriers — including a now-repealed ban on dredging by hand, a technique used mainly by blacks and Native Americans — lead many local oystermen to wonder whether they’re being singled out. “You’ve got to be crazy to sit here and tell me it’s not racial,” says Stanley Encalade, Byron’s 50-year-old brother. “From day one for me, it was about race; it was about control; keep the small people out of the business. Everything done in this business was done to hurt the poor black fishermen.”

Byron is less eager to cast the struggle in racial terms. Oystering policies, he says, have always favored larger operators. “We can never say ‘racial’ without saying ‘economics,'” he explains. “We have people who feel the only way to stay wealthy is to keep us poor. We have a lot of white people suffering too.” But suspicions of systemic racism are not without historical roots. Pointe-a-la-Hache sits on the east bank of the Mississippi River, in Plaquemines Parish south of New Orleans. For many years, the kingpin of politics in this delta parish was judge and district attorney Leander Perez, a hardcore segregationist who converted an abandoned fort in the tidal swamps — infested with mosquitoes, rattlesnakes, and water moccasins — into a jail for civil-rights activists. Though Perez has been dead for four decades, his legacy is not forgotten here. What’s more, while the west bank of the Mississippi burgeons with oil and gas operations, the east side has a quieter, left-behind feel. “This little town, it looks like a back-burner place,” says Hambone. “It doesn’t get the recognition it deserves.” 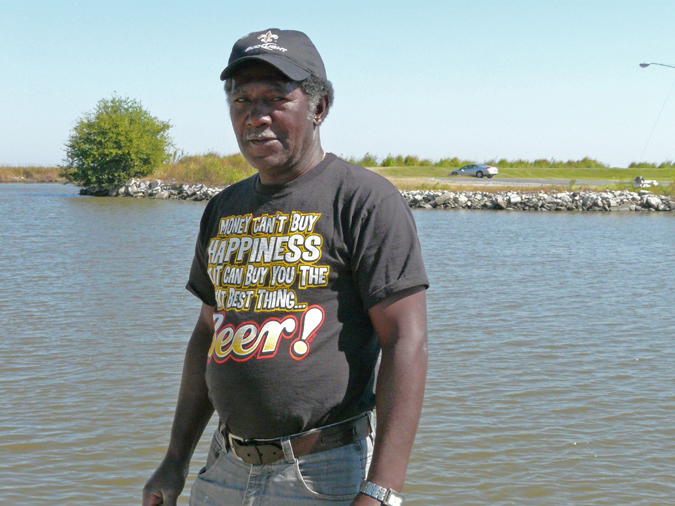 Norman Reddick: “You think they got a bank down there that we can rob?”

What keeps these men from both poverty and despair is their shared history and generosity. “If you ain’t got help from your family and friends, you’d be in a pickle,” Hambone tells me. “Good thing we’re close-knit people. If he got some, he’s going to give. He might have a job at a chemical plant. Maybe one of the crabbers might be short a man and say, ‘Come, make a hundred bucks.’ That’s how we floatin’, bro.'”

Just as Hambone says this, a boat pulls up to the marina, and a friend offers up a fresh-caught six-pound gar, a long, slender fish with an almost dolphin-like face. The oystermen set it on a table lined with cardboard from a beer case and covered with a burlap sack. One man runs into the store to borrow a frying pan. With a knife and pliers, Hambone and a friend begin hacking away at the thick scaly skin. Alligator comparisons are inevitable. “You can make a belt out of that,” says one guy, who then turns to me. “Tell them we make our shoes with it.”

“That’s all white meat,” says Kelly Jacobs, a refinery worker who calls the oystermen his family. “I want some of it.”

“You ever see a fish with black meat?” asks Norman Reddick.

“They’re treating these guys like black meat,” says Kelly, reflecting on the raw deals these oystermen feel like they‘re getting from the government and BP. “They’re f–king with the brothers.”

As the fish comes out of the frying pan — cooked outdoors on a propane stove — the men grab pieces with paper towels. They won’t let my hands stay empty; they keep filling them with gar, beer (from a case I had bought), even a bag of locally grown Satsuma mandarins. This camaraderie, along with the local harvest, is what has always made Pointe-a-la-Hache livable, says Byron Encalade. “As long as we got our bayous, we’re going to eat,” he says. “Take the bayous away, then we’re in trouble. And that’s what they did: took the bayous away from us.”