A family forced onto food stamps by the deepwater moratorium wants drilling to resume — but also laments the American dependence on oil.

Part 3 of Losing Louisiana, a series originally published in onEarth. 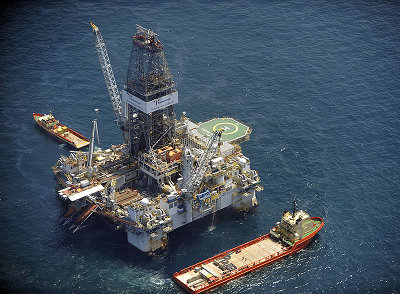 Many Louisiana residents make a living from offshore drilling but are angrier than the rest of the country at BP’s negligence. Photo courtesy of U.S. Coast Guard.

FOREST FOYTLIN WAS WORKING on a deepwater drilling rig in the Gulf of Mexico when the radio crackled news of the blowout on the Deepwater Horizon, 100 miles away. It was the kind of nightmare he had often played out in his head. “When the blowout happens, there’s really nowhere to run,” says Forest, who is 36 and lives in Rayne, Louisiana, west of Lafayette. Foytlin imagined himself in the same situation, with no choice but to jump into the dark water and start swimming. Listening to the news, “I felt helpless: I couldn’t do nothing for these guys.”

I met Forest and his wife Cherri at Bourque’s Social Club in Scott, Louisiana, which is owned by their mutual friend Drew Landry. Drew is a songwriter and former crawfisherman who gained overnight attention when he stood before the National Commission on the BP Deepwater Horizon Oil Spill and Offshore Drilling in New Orleans and played a tune he had written called “BP Blues.” The video of Drew’s room-silencing performance went viral, turning the shy Cajun into a shaggy-haired spokesman for the oil workers, fishermen, and pelicans along the coast. (In the audio below, Landry sings about health problems facing clean-up workers.)

Drew had agreed to meet with me, but insisted I was chasing the wrong story. Instead of interviewing him, he said, I should talk with those directly affected by the spill — people like Forest and Cherri Foytlin. The couple had received some news coverage before, most notably a July interview on CNN, but never with much depth. As I talked with the Foytlins, I was struck by how much they embody what I’ve come to think of as the Louisiana Paradox: down here in the Pelican State, people support wildlife preservation and oil-industry jobs, and are equally angry at BP (for polluting the Gulf) and President Obama (for imposing a moratorium on deepwater drilling).

In an ABC News-Washington Post poll last summer, 79 percent of Gulf Coast residents called the spill a “major disaster,” compared to 68 percent nationwide. Sixty-one wanted criminal charges filed against BP, five points over the national average. At the same time, 60 percent of Gulf residents opposed President Obama’s six-month moratorium on exploratory deepwater drilling, compared to only 39 percent nationally. Knowing this, I wanted to put aside my own knee-jerk reactions and listen to what folks like Forest and Cherri had to say. 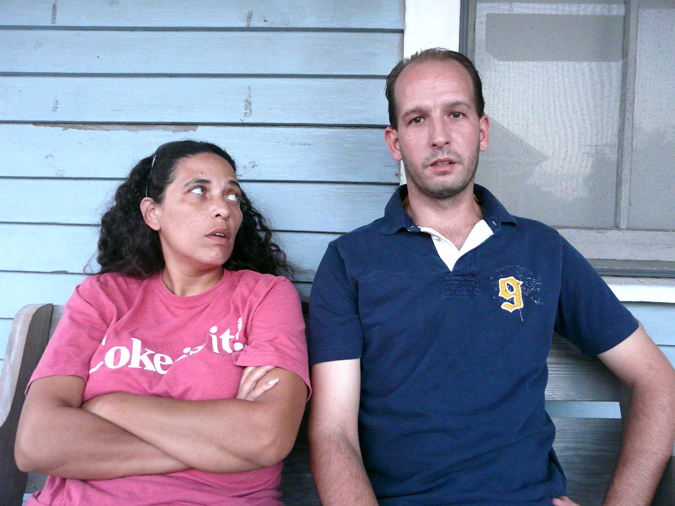 Forest Foytlin with his wife Chrri: “”When I’m in the shop, I hear people say, ‘Oh, Mr. Big Money. Look at you now.'” Photo by Barry Yeoman.

The Foytlins, who have six children, moved to Louisiana from Oklahoma in 2005; it was homecoming for him. Their Oklahoma house had just been foreclosed; Cherri had lost her job, and Forest’s salary driving a street sweeper couldn’t cover the mortgage. Forest’s brother assured him that the oil industry paid its workers well, and indeed it did; by the time of the BP spill, Forest was bringing home $3,000 every two weeks. He worked 14 days on and 14 days off for an oilfield service company.

It was lonely being away from Cherri and the children for two weeks at a stretch. And oilpatch life was hardly romantic. “For the amount of money I was making, I didn’t care if I slept in a truck. I could eat bologna sandwiches,” he says. “As long as my wife and my children had a cool place to live, or a warm place, beds and food of their own, to where I didn’t have to worry about them, it wouldn’t matter.”

When President Obama froze new off-shore drilling permits in May, pending the results of a 30-day safety review, Forest thought that was a reasonable short-term response to the tragedy. But when Obama imposed the six-month moratorium, it seemed to Forest arbitrary and draconian. The deepwater rig where Forest had worked had a strict safety ethos, he says — unlike some land rigs where he has seen workers smoke cigarettes within six feet of open wells. “There’s certain safety guidelines that people have to be aware of to even be near me while I’m operating my machine,” he says. “While I do all this stuff, and some guy tells me he’s taking my job away because I’m not doing my job safely, it’s aggravating.”

Even more, the moratorium meant a return to the poverty that the Foytlins thought they had escaped in Oklahoma. Forest’s company transferred him from the rig to its shop, where he sweeps floors and picks up parts for $10 an hour. On weekends he takes painting and handyman jobs. Cherri works half-time writing features for the weekly Scott Connection, occasionally baby-sits, and home-schools their children.Now that Obama has lifted the moratorium, Forest is itching to get back to the Gulf. But it could be months before the deepwater rigs will clear the regulatory hurdles required to resume drilling.

In the meantime, the Foytlins are hemorrhaging financially. They’ve sold a car and cut expenses like sports leagues for their children. Until they started receiving food stamps, Forest and Cherri skipped meals so their children didn’t have to. “There were times when I was literally sitting in the Dollar General store, and this little child” — she points to her two-year-old, who is nuzzled beside her — “was sick, and I had to pick between getting Tylenol for his fever or bologna to feed the other kids.”

Their 14-year-old worries that her parents will lose their house, as they did once before. (Cherri is proud that she’s only been late once with the mortgage.) Their 13-year-old has asked his father to borrow the lawnmower to earn money for a haircut. Friends who were making less than the Foytlins are now dropping off food at the family’s house. It’s hard for them to accept this generosity, but not as hard as it was to apply for social services. “I cried that day — just to have to ask,” Cherri says. “We’re working people down here. We like to work and make a living.”

Forest wakes up at 4 a.m. feeling aggravated that he can’t support his children. He goes off to work, where coworkers (“basically, grown kids”) tease him for his reversal of fortunes. “When I’m in the shop, I hear people say, ‘Oh, Mr. Big Money. Look at you now.’ It’s like being bullied at your own company, but what can I do, quit?” When he comes home, “I can’t just shut it off,” he says. “I’ll snap at my kids, and I know it’s not their fault.”

So that’s half their story. It’s the other half that provides the complexity that many of us outside Louisiana struggle to understand.

In May, Cherri and some other reporters were invited on a tour of the Gulf. She went, then returned a week later on her own and convinced a fisherman who was laying boom to take her out on his boat. “We found a pelican that was in the marsh, and it was just covered with oil everywhere,” she recalls. The man pulled the bird onto the boat, with hopes of getting it to the Fort Jackson Oiled Wildlife Rehabilitation Center. But the bird was already convulsing and died shortly after they rescued it. “I wish there was a way to say you’re sorry in Pelican,” says Cherri, who is 38. “He just kept looking at me. I felt guilty — not because my husband works in the oilfield, because we have to make our money — but because I realized all the things we as a people waste.”

Shortly after her trip, Cherri met Drew Landry, and the two became fast allies. Both spoke at the meeting of the national oil spill commission, where Landry sang, and together they have planned various events to bring together coastal residents affected by the spill. This Saturday, they’re organizing a rally at the Louisiana State Capitol in Baton Rouge, followed by a town-hall meeting and concert.

What strikes me, listening to Cherri’s public speeches, is that she doesn’t create a dichotomy between environmental and economic concerns. In a stirring address during the Spill into Washington D.C. Labor Day Rally, Cherri compared America’s oil dependency to heroin addiction. “We have not been living right on this Earth for a very long time,” she said. But she also described the moratorium as a “punch in the stomach to the people of our area. The story never told about South Louisiana is that the fishermen, crabbers, oystermen, and oil workers are the same. Many of our fishermen work the season doing what they love, and they go back to the oilfields to make a living. All of us live to serve and be served from the Gulf of Mexico.”

At Bourque’s Social Club, I ask Cherri to help me reconcile what many non-Louisianans don’t understand: how someone can be outraged by the spill and simultaneously criticize the moratorium. “I would gladly not be drilling if it wasn’t for the fact that all of America requires this oil to keep going, and my husband requires a job,” she says. “But I think the real power of the oil companies comes from the people of America. All we have to do is stop consuming and move toward cleaner energy alternatives. I mean, put my husband out of a job, will you, please? I would love for him to build solar cells down the street.

“I know it’s a Catch-22, saying that you love the environment but you want your husband to keep working in the oilfield. Put him out of a job. Change the way we do things here. And provide other alternatives for us. That’s one of the things that bothered me: They can cut your legs out from under you, but they gave us no retraining for our oil workers. We have no clean-energy options down here. So give us a way to take care of that, and we’ll gladly do that.”

Forest, for his part, says he’s calling a moratorium of his own. “I’m putting a moratorium on my vote,” he says. “Until I have my job back, and my family’s secure, I’m not voting for anybody.”