Part 4 of Losing Louisiana, a series originally published in onEarth. 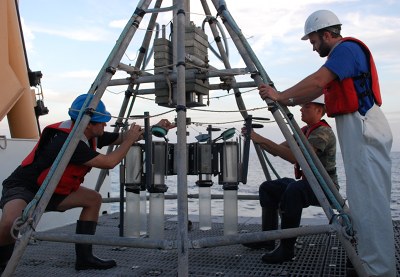 Using a multicoring drill like this one, researchers have found a gooey “slime snot” on the bottom of the Gulf of Mexico. Photo courtesy of NOAA.

VERNON ASPER CLICKS A BUTTON in a darkened room. Up comes a slide showing three transparent cylinders, each containing soil from the bottom of the Gulf of Mexico. We are sitting around a polished conference table — six state legislators, a local BP official, and myself — at NASA’s John C. Stennis Space Center in Kiln, Mississippi, just over the state line from Louisiana. Asper, a professor of marine sciences at the University of Southern Mississippi, is unveiling some of the latest research into the question: What happened to the oil from the Deepwater Horizon disaster?

To hear some tell it, the pollution is gone. Two weeks ago, the New Orleans Times-Picayune quoted federal officials saying there was little recoverable oil left in the Gulf of Mexico, either on the surface, in the water column, or in the sediment at the bottom. Asper, who works out of the NASA facility, agrees that bacteria are doing their job and consuming much of the crude released by the spill.

“Oil, in proper doses, is actually a nutrient in the Gulf of Mexico,” he tells us. “It feeds the ecosystem.”

The sea floor is a different story.

Asper specializes in particle dynamics in the ocean. Observations of the Gulf after the spill showed that some oil was sinking, so he and his colleagues wanted to find out whether it was reaching the sea floor. They used BP funds to buy a “multicorer,” which Asper called “the ultimate device” for obtaining underwater soil samples. “You get the best samples you can imagine,” Asper says.

The samples we’re viewing were taken by Asper’s colleague Samantha “Mandy” Joye, a professor of marine sciences at the University of Georgia. In the first cylinder, taken 140 nautical miles from the Macondo well (the site of the blowout), the soil looks uniform in color. “What you see is mud,” Asper says. The second sample, removed from an intermediate location near Gulfport, Mississippi, has a thin dark layer that tested positive for oil. But it’s the third, taken just 16 nautical miles from the site, that looks most dramatically striped. At the bottom is old mud. In the middle is “presumably” a layer of oil. And on top sits a two-inch-thick layer of what Asper calls “slime snot” made up (again, presumably) of oil and the bacteria feeding on it.

“Anywhere you go within about 50 miles of the well, you find this,” Asper tells us. “We’re getting this analyzed to see exactly what kind of products are in there. Until we know that, we can’t absolutely say that it’s oil. But it sure looks like oil, it smells like oil, and it is not found great distances from the well site.”

It also appears to be unique. Asper shows another slide, this one from a natural seep in the Gulf of Mexico’s Green Canyon. The “flocculent, gooey, whatever-it-is” so visible in the Macondo sample is not present in the Green Canyon one. This two-inch layer, he says, “is something we have not seen before.

“The question is: Where did the oil go? At least some of it went down here. Was it a lot? We don’t know yet.” The analyses of Joye’s samples should be back “any minute,” he says, and the University of Southern Mississippi has collected additional underwater soil of its own. But the tests cost $1,000 per sample, and there are issues with funding and laboratory backlogs.

What do these preliminary findings mean for underwater life? “Let’s suppose you’re a worm down here, and you make a living sticking your head up through the mud and feeding,” Asper says. “Now you’ve got two inches of goo on top of you. You’re going to have a real hard time surviving. And not only that: the worms help to oxygenate this sediment. With this stuff, whatever it is, on top, it’s going to be really hard to get oxygen into the sediments. So this could be potentially a large area of very serious impact.”

That worm’s fate could have ripple effects up the food chain, too, starving “the deep-diving things that feed on deep organisms. Sperm whales dive really, really deep, and they’re eating squid and whatnot. All kinds of fish dive way down there and graze. Any time you affect part of the ecosystem, it’s definitely going to have an effect throughout the ecosystem.”

It will still take time, though, to find out exactly what that effect might be. Asper’s willing to devote the next part of his professional life to studying “slime snot” — he just needs the funding. “In my opinion,” Asper says, “this is what we desperately need to be studying: finding out how that got there, what’s going to become of it, and what impact there is.”

“We can’t absolutely say that it’s oil,” Asper told us. “But it sure looks like oil, it smells like oil, and it is not found great distances from the well site.”

Now, according to a prominent geochemist, there’s substantial evidence that the sediment beneath the Gulf is indeed contaminated with oil from the BP disaster — a finding that has put the somewhat forgotten spill back in the news again.

Yesterday I talked by phone with David Hollander, an associate professor of chemical oceanography at the University of South Florida. Hollander was speaking from aboard the R/V Weatherbird II, a research vessel that is exploring the northern Gulf looking for contamination from the spill. Hollander’s crew has been taking sediment-core samples 20 to 26 nautical miles north and east of BP’s Macondo well, in the region of DeSoto Canyon, a nutrient-rich erosional valley off the Florida coast. His research zone is located farther from the well than Joye and Asper’s, and in the opposite direction.

Last August Hollander used an oil-patch trick from the 1930s: He shone an ultraviolet light on the sediment. “It reflected back at us like a constellation of stars,” he says — an observation he calls “consistent with the settling of a fine mist of oil microdroplets.”

A molecular analysis showed that the fluorescing particles were indeed petroleum hydrocarbons. But did they come from the Macondo well?

To find this out, Hollander performed a test called compound-specific isotope analysis. “We can measure the concentration of different types of carbon atoms to develop a fingerprint on over eight separate compounds,” he explained. Earlier, he had used this method to determine that the chemical signature of the oil in the Gulf’s underwater plumes matched that of the oil from the BP spill. This time he applied the analysis to the sediment goo.

“Geochemists are very prudent,” he said. Without molecular proof, “we were very reluctant to say it was BP oil.” But when Hollander performed the analysis — the results have just come back, he says — “it was a perfect match. Probability-wise, for one to match that kind of fingerprint by chance would be miraculous.”

Hollander described the layer as “rubbery, almost gelatinous” — a mixture of oil and bacteria feeding on it. “There’s no doubt the microbes are working their way through the oil,” he said. “That doesn’t mean the material isn’t toxic.” Even if it’s below government toxcity standards, he says, it can have debilitating effects — weakening fish, for example, so they’re more vulnerable to predation. Length of exposure matters too: “If you’re contaminated by these chemicals for a long time, even if the concentrations are low, they can have an effect.”

Exactly what that effect is. scientists don’t know yet. Hollander is particularly anxious about small organisms at the bottom of the food chain, including fish eggs and fish larvae. Already a marine bacteria and a one-celled marine dinoflaggellate east of Macondo have shown “very, very repressed” photosynthesis, he says.

Hollander also worries because 2010 has been a year of strong “upwelling” — movement of water away from the coast — “which will dose the upper continental slope and shelf with hydrocarbon contaminants.” Hollander plans to keep monitoring the damage; he will be making research trips into the Gulf for the next 16 months.