Gulf Coast residents are suffering the deep emotional distress that comes with a protracted crisis that has no clear end, and some communities have no safety net.

Part 6 of Losing Louisiana, a series originally published in onEarth. 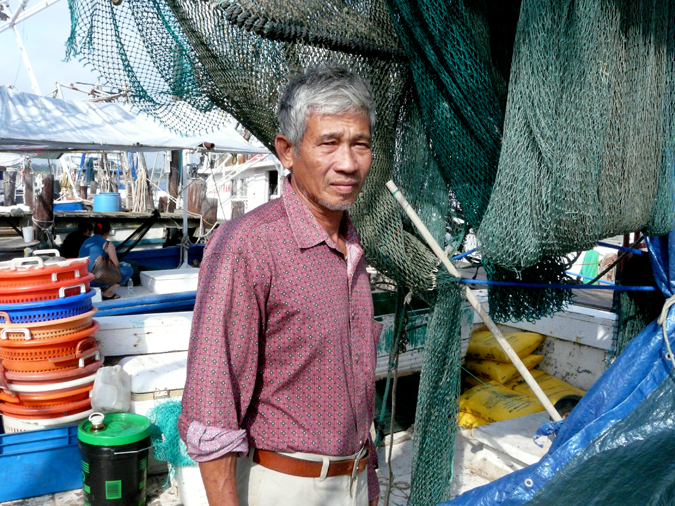 Sung Van Nguyen, a shrimper and former South Vietnamese soldier, has barely returned to the waters since the spill. Photo by Barry Yeoman.

IN THE SEVEN MONTHS SINCE the Deepwater Horizon blowout upended life on the Gulf Coast, the environmental and economic fallout has been quantified every which way. But during my travels throughout southern Louisiana and Mississippi, I keep encountering another type of toll that’s harder to define: the deep emotional distress that comes with a protracted crisis that has no clear end.

Gulf Coast residents are a resilient lot. They rebuild after hurricanes and relocate when the land around them disappears. But with the BP spill, “everyone’s balloon just deflated,” David Baria, a state senator from Bay St. Louis, Mississippi, told me. I’ve seen and heard a lot about that deflation over the past month. Baria calls it a “funk,” but what he’s describing is often a deeper sense of fear and hopelessness that reduces men to tears and occasionally spills over into antisocial behavior. And in some communities, the impact may be worse than others.

“It is, in an instant, taking from someone their whole livelihood,” says May Nguyen, a consultant who works with the Mary Queen of Vietnam Community Development Corporation, which was initially formed to help New Orleans’ Vietnamese-Americans after Hurricane Katrina. She tells me about a series of focus groups she helped organize, facilitated by a forensic psychologist, in which residents impacted by the oil spill talked about their lives. “There was someone who admitted to planning their suicide,” she says. “There were plenty of women who talked about domestic disharmony. For Vietnamese people, harmony in the household is sacred. There was everything you see in America because of the recession, but worse, because there was no real hope for future skills or opportunities or jobs.”

A few weeks earlier, I had seen this sense of hopelessness first-hand in Biloxi, Mississippi. I was visiting with Boat People SOS (BPSOS), an organization that serves Southeast Asian communities across the United States, including three on the Gulf Coast. (The other two are in Gretna, Louisiana, and Bayou La Batre, Alabama.) By BPSOS’s estimates, 8,500 Vietnamese-Americans live in the Biloxi area; many of them are refugees who left Vietnam after the war ended in 1975 and communists reclaimed the country’s south. The immigrants settled along the Gulf Coast because the climate and fishing economy mirrored the places they left behind. Members of the same village often rebuilt their social ties from back home.

Fishing and working at seafood processing plants allowed Biloxi’s Vietnamese to continue in familiar professions that don’t require English proficiency. Many lost their boats, their homes, and their savings in Katrina, and were rebuilding their lives when the oil spill hit. Only about 30 percent were hired by BP’s Vessels of Opportunity clean-up program, according to Daniel Le, BPSOS’s Biloxi branch manager.

Le told me that he has seen an uptick in alcoholism and domestic violence since the spill and has noticed unemployed fishermen isolating themselves rather than turning to their loved ones for support. “They want to go to their boat, whether to drink or just to be away from everyone else, rather than stay home,” he said.

After our conversation, Le took me to a rickety plywood dock on Biloxi’s Back Bay, next to (but hidden away from) the Boomtown Casino. There we met 60-year-old Sung Van Nguyen, a former South Vietnamese soldier who fled the country after the war. He now catches shrimp, and (at the time of my October visit) had only made one seven-day harvesting trip since the waters reopened. During the shrimping moratorium, money was so tight that he cut back on his food intake, eating just as much as he needed to survive. He spoke in Vietnamese, with Le translating.

Adding to Sung Van Nguyen’s hardship was the fact that the Federal Emergency Management Agency (FEMA) has demanded he pay back $8,000 in benefits he received immediately after Hurricane Katrina because he couldn’t prove his address. Even after the spill, he said, FEMA required him to keep repaying $140 a month. (FEMA spokeswoman Rachel Racusen says the agency will work with individuals suffering hardships.)

As he talked, Sung Van Nguyen’s eyes began to glisten. Then he wept openly. “It was an accident,” he said of the spill. “We have to look at it as an act of God. I’m not blaming anybody. I just don’t know much longer I can take these traumas.” He pat his face dry, and as he talked he crumpled the moistened tissue in his weathered hands. “I’m a simple man. I don’t need much. I just need the opportunity to earn a living one day at a time. I have no idea how long the environmental impact of the oil spill will last, but I’m going to ride it out. This is the only thing I know.”

May Nguyen says that tears coming from a male Vietnamese fisherman is no small distress signal — and she, too, has seen it since the BP spill. “I’m telling you, these men have been through a war, been refugees, been through Hurricane Katrina. These men don’t cry for nothing.”

Of course, the distress evident in Sung Van Nguyen’s face is hardly restricted to one ethnic group. A September Gallup poll, which covered 25 Gulf Coast counties from Florida to Texas, showed a 26 percent spike in clinical-depression diagnoses since the spill. (Inland residents showed no such increase.) This mental-health emergency led Louisiana Health and Hospitals then-Secretary Alan Levine to write a strongly worded letter to BP last summer requesting funds for mental-health services. “Our teams of counselors imbedded in the impacted communities are now warning us of an emerging behavioral health crisis,” he wrote. “There exists anger, anxiety and uncertainty among the families and communities affected by the spill, which will easily manifest into addiction and various forms of mental health crisis if not confronted.” In August, BP provided $52 million for “behavioral health support” in the Gulf states, including $15 million for Louisiana. But the oil company’s $20 billion compensation fund does not cover mental-health claims.

To my eyes, the more a community depends on the water, the more visible that anxiety and uncertainty is. Just before Thanksgiving I visited Louisiana’s Grand Bayou Village, an  Atakapa-Ishak Indian community 50 miles southeast of New Orleans. Accessible only by boat, Grand Bayou has faced myriad threats, from hurricane damage to the disappearance of its wetlands. (Before Katrina, there were 23 houses there. Now there are six, with three more rebuilding.) “In all of the challenges we face, this is the first time our food supply was imperiled,” resident Rosina Philippe told me. The men of Grand Bayou, she said, were feeling hopeful about the 2010 shrimping season: the prices were high and supplies appeared abundant. That made the oil spill, which shut down much of the shrimp harvest, that much more of a blow. The stress came out in subtle ways — “latent hostilites,” Philippe said — and you had to know where to look.

“These guys don’t cry,” she explained. “They internalize their feelings. You could look at their faces and they were bereft of emotions. But if you looked in their eyes, you could see something was going on.”

Even for those whose incomes are not tied to the water, stress has run high since the spill. Baria, the state senator, says the disaster has been responsible for the cancellations of construction projects and home-buying deals in his district. This might start to explain some preliminary data released last month by Steve Picou, a professor of sociology at the University of South Alabama. Picou compared the mental health of southern Mobile County, Alabama, after the BP spill to Cordova, Alaska, after the 1989 Exxon Valdez tanker spill. Eighteen percent of the Alabamans showed severe post-traumatic stress symptoms, compared to 15 percent of the Alaskans — even though five times as many Cordova residents worked in marine occupations. “The [economic] disruption on the Gulf Coast seems to be less,” Picou says. “But the mental-health impacts are at least as significant, or more significant.”

For Vietnamese-Americans, says Daniel Le, complicating matters is the low value their culture places on sharing feelings. “Mental health is still a novel concept to many,” he says. “They don’t speak about their emotions, to professionals or in general. When you express your frustrations, it’s a sign of weakness.” (I’ve heard similar concerns about Native Americans and white blue-collar workers.) Even for those who want counseling, it’s not always available in the right language, says May Nguyen.

The striking thing to me about the Gulf Coast’s Vietnamese residents is that many have already proven their ability to endure practically anything. Nam Nguyen, a crabber from Gauthier, Mississippi, came to the United States in the late 1970s — after the war ended, he couldn’t afford basics like boat fuel, which meant he couldn’t work. He also feared the new regime. “With the communists, they can arrest you anytime, any day, anywhere, for no reason,” he told me through another translator. Leaving the country meant crowding with 60 others onto a tiny fishing vessel. At sea, his boat was intercepted by Thai pirates, who stole the engine, abducted the young women, and robbed the remaining passengers of their valuables. The boat eventually floated to Malaysia, where Nam Nguyen remained for a year before a series of moves to the Philippines, Kansas (where his older brother lived), and eventually Mississippi.

After the BP spill, Nam Nguyen’s crabbing boat was grounded until August: the Coast Guard was blocking the boat launch and the processors weren’t buying crabs. His wife still earned money as a housekeeper, and BP compensated him for some of his losses. But the couple nonetheless had to deplete their savings to support themselves and their 10-year-old. Even after he resumed crabbing, Nam Nguyen wasn’t home-free: just before my visit, he brought his catch to a processor who told him the crustaceans contained oil. As a result, that processor would no longer buy his catch. He wasn’t completely surprised: “The crab is considered a bottom feeder, and you can’t really see if the oil has settled down at the bottom. If it is, how are you going to clean it?”

I asked Nam Nguyen about finding other work. He looked at me like the question was ridiculous. “How am I going to do it?” he replied. “I don’t speak English. I don’t even read or write in my native language. This is the only thing that I have ever done in my life.” If his crabs keep turning up with oil, he said, “my life will be over. I don’t know what else to do.”