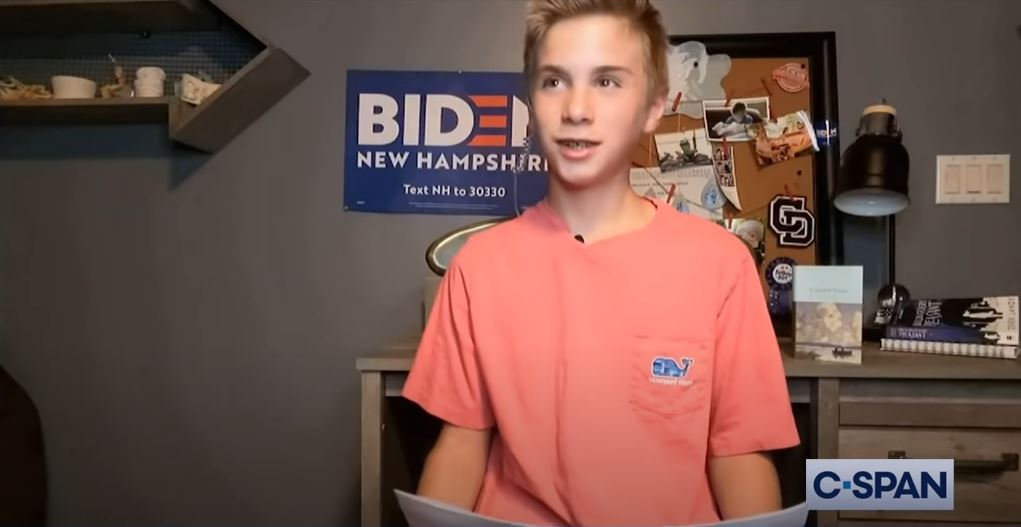 Brayden Harrington during the 2020 DNC.

DURING THE 2020 DEMOCRATIC NATIONAL CONVENTION, America fell in love with 13-year-old Brayden Harrington, who talked about bonding with Joe Biden over their shared experience of stuttering. During the Biden presidency, you’re likely to hear a lot about people who stutter. I’d like you to hear from us directly. Here is some work about stuttering, created by people who stutter.

1. Start with John Hendrickson‘s article in The Atlantic about Biden’s stutter and his own. It’s a meditation on vulnerability and denial, and the stories we tell to polish our imperfect edges.

2. Darcey Steinke wrote for The New York Times about how her stutter makes her a better writer. “Stuttering is a violent incantation that can break open normal conversation. What happens in that breach is up to the stutterer and her listener.”

3. Emma Alpern‘s words make my brain pop. Like her Vice article about pushing back against the scrutiny women’s voices receive (think vocal fry), and demanding patience and respect instead. Check out, too, her Atlantic story on embracing stuttering.

4. Please read everything Issac Bailey writes, and listen to everything he says. Start with the raw and room-silencing address he gave before the Nieman Foundation for Journalism at Harvard. Then read his book My Brother Moochie.

5. I occasionally discuss the issue in my own work. I wrote this essay for The Baffler about how stuttering has usually been viewed through a narrow medical lens. “Some of us, though, have been trying to flip the paradigm, to reframe stuttering as a trait that confers transformative powers.” I discuss Joe Biden and the overcoming narrative in The Nation. And more than 20 years ago, I wrote this travel story for Salon about a tense encounter over my stutter that led to some unexpected friendships.

6. I wept when I first read Honest Speech, a poem by Erin Schick. I won’t say more, lest I blunt its power. Read or, better yet, listen.

7. Honest Speech kicks off an anthology called Stammering Pride and Prejudice. The book is a treasure, with provocative and liberating ways to rethink stuttering. U.S. residents can order a copy here. Elsewhere, order here. Or buy the Kindle edition.

8. A number of powerful documentaries have been made by people who stutter. I recommend Jeff Shames‘ deeply personal Spit It Out, which also addresses addiction and family dysfunction. Stream it for $5 at New Day Films. (Use coupon code SIO14DAY.)

9. I also recommend Mike Turner‘s documentary The Way We Talk, which is both a generational story and the chronicle of a journey toward healing. Stream it for $3.99.

10. I’ve described comedian Nina G‘s memoir, Stutterer, Interrupted, as “deliciously profane and skin-wide-open self-revealing.” Back when the elementary-school bullies taunted me, I wish I could have pulled Nina out of a hat. Also read her essay on the overcoming narrative.

11. Actor Jacquelyn Joyce Revere covers a lot of ground on her YouTube channel. When she addresses stuttering, she looks you in the eye and speaks truth. Listen to her episode on stuttering during a pandemic.

12. Marty Jezer, who died in 2005, was an antiwar activist and Abbie Hoffman’s biographer. He was smart and kind and loved to upend gender propriety by knitting on the NYC subway. His 1997 book Stuttering: A Life Bound Up In Words was pioneering.

13. Katherine Preston‘s book Out With It: How Stuttering Helped Me Find My Voice started as a journalistic road trip and ended up as considerably more profound.

14. You might have heard composer Jerome Ellis on This American Life. This video visually represents his 2020 performance for The Poetry Project on the tyranny of time. Also two prayers to his stutter.

15. In David Mitchell‘s novel Black Swan Green, the protagonist is a teenage boy with a stutter. It was my introduction to Mitchell’s work, and a small masterpiece. Also watch his 2013 keynote at an international stuttering conference.

16. Spring Kwok describes the moment of stuttering out in the world: “I know it’s O.K. because it’s the same laugh time and time again. It is not malicious; it’s nervous and awkward and reminds me of a horrible first date.”

17. Nathan Heller on why The King’s Speech resonated: “At its most influential, language is so little dependent on spontaneous speech that even someone permanently stymied on that front—a stutterer—can eke out a message that commands a nation.”

18. This Ted Talk by artist Safwat Saleem, about challenging the notion of normal, is funny and visually beautiful and poignant. And it features a talking sheep.

19. A beautiful short film based on the poetry of Canada’s Jordan Scott.

20. This slam poem by Phil Kaye: “Stutter is a cage made of mirrors.”

21. Christopher Constantino writes about Stutter Gain, a riff on the term Deaf Gain. When you pick up a copy of Stammering Pride and Prejudice, look up his essay “Stutter Naked.”

22. “What would have been the cost, really,” writes Amy Reardon in this lyrical essay, “to give one shy, serious little girl—who already was making herself so small she barely took up any space at all—permission to be who she was?”

Nihil de nobis, sine nobis. (Nothing about us without us.)